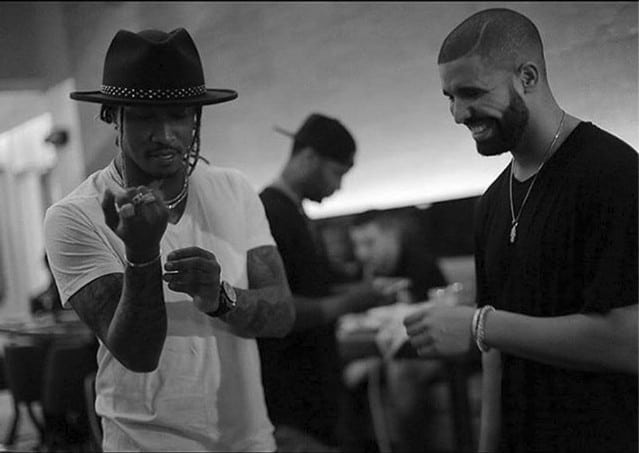 As I look back on the reaction to the previous decade in music, I think most people forget the true impact and timing of Drake and Future’s What A Time To Be Alive tape.

The timing of the tape almost felt like a hit of a drug. It was the top two artists in the game combining forces at a time when both were coming off legendary runs. They gifted their listeners with an extension and elevation of their already imprinted sound. With that combined sound, more than any other project of the 2010s, What A Time To Be Alive really set the stage for the fusion of street Atlanta melodic trap with vulnerable R&B hip hop that exists at the core of music moving into the 2020s.

Drake, early in 2015, dropped the wildly popular record, If You’re Reading This It’s Too Late. It was in rotation at every party, out of all car speakers, and in everyone’s headphones. “Know Yourself” made everyone wish they were from Toronto or wish their city had a better song to chant for representation. Then ghostwriting accusations came from Meek Mill and Drake responded with a double whammy of diss tracks ending in “Back to Back.” Whether you think it was of the most devastating disses of all time is meaningless. It was the absolute best diss SONG of all time with unlimited replay value. You heard it everywhere. Drake had three quarters of dominance and even a bounce back worthy of accolades (literally a Grammy nomination) in 2015.

Future had arguably the most impactful and bumped street album of 2015 in Dirty Sprite 2. That album was respected by all people affiliated with hip hop. Even the old school hip hop heads could be seen praising the tape for its authentic street essence. It was a culmination of a three mixtape run including a defining single in “March Madness” prior to its release. Future truly delivered a no skips anthemic reckless escapist masterpiece in the Dirty Sprite sequel to cement his status as an innovator and style creator.

It could be argued that those two projects defined the sound of 2015. For sure in hip hop. Kendrick Lamar released To Pimp A Butterfly in 2015, but that was an enigma separate from the core sound. That year hip hop was as mainstream as pop and Drake and Future dominated the space. Then they combined at the perfect time to keep the momentum going by dropping a tape together. The title – What A Time To Be Alive – enhanced the point of the impact of the timing it had on both of their careers.

There is something so addictive about both Drake and Future’s music. They chose the perfect moment in time to blend both of their sounds into a cohesive and successful body of work. They even tapped Metro Boomin – maybe most defining producer of the decade – to executive produce the project. It was the type of collab to make the consumer and record executive salivate.

You heard What A Time To Be Alive everywhere. It was what we all wanted. They had an undeniable hit with “Jumpman”, featuring repeatable lines and slick Metro Boomin 808’s, fused with moments Future floating over trap beats and introspective Drake melodic moments – most notably the “doin me dirty” section at the end of “Diamonds Dancing.”

Drake and Future even had moments of invention like “Plastic Bag” where they created the stripper appreciation ballad. A song you wouldn’t play in the strip club until last call or one you would bump on the way home from the club. The duo even ended the tape with introspective solo tracks that were both in keeping with the record, whilst showing their individuality. Future had “Jersey” which more deeply explored his street-based journey in that signature low-key trap wave. Drake ended the tape with “30 for 30 Freestyle” which is the type of self-reflective somber raps we have all learned to love him for. They gave us what we knew we wanted – and even some vibes we couldn’t have anticipated we needed. Drake and Future combined their defining qualities creating a fusion that seems to be what the present sound is trying to duplicate through individual artists. The current #1 song in the US – “The Box” by Roddy Rich – sounds like a direct extension of that fusion.

Two artists coming together at their peak to create a body of work that successfully defined a decade’s sound has never happened before or after. Some could argue for the impact of Watch The Throne, but that record didn’t combine the same level of off runs that Drake and Future had in the same year. Together, they’ve changed the face of music and, luckily for us, have now combined forces multiple times since.

Drake and Future’s recently released Director X-directed video for their single “Life Is Good” was a reminder of the impact they created together. It’s their most successful visual yet, showing the duo working regular jobs in fast food, trash disposal, and tech sales. It’s as goofy as it is hard. Then they dropped a leak of their track “Desires” which explores their semi-problematic control issues and entitlement in relationships. They float with trap melodic ease and provide hype for a potential sequel to the initial tape.

The rappers have shown true companionship and compatibility in a game once defined by competition. They embody the phrase “we win more together” – especially as the timing of “What A Time To Be Alive” seemed almost reactionary to Drake’s Meek Mill feud. Since, they have somehow one-upped their own work each time they drop together.

What A Time To Be Alive was one of the most impactful projects of the 2010s if you analyze the full scope of its impact on the sound of music – and even just Drake and Future’s legacy together. Just listen to the songs that consistently take precedent from new hip hop artists and see if you hear them.