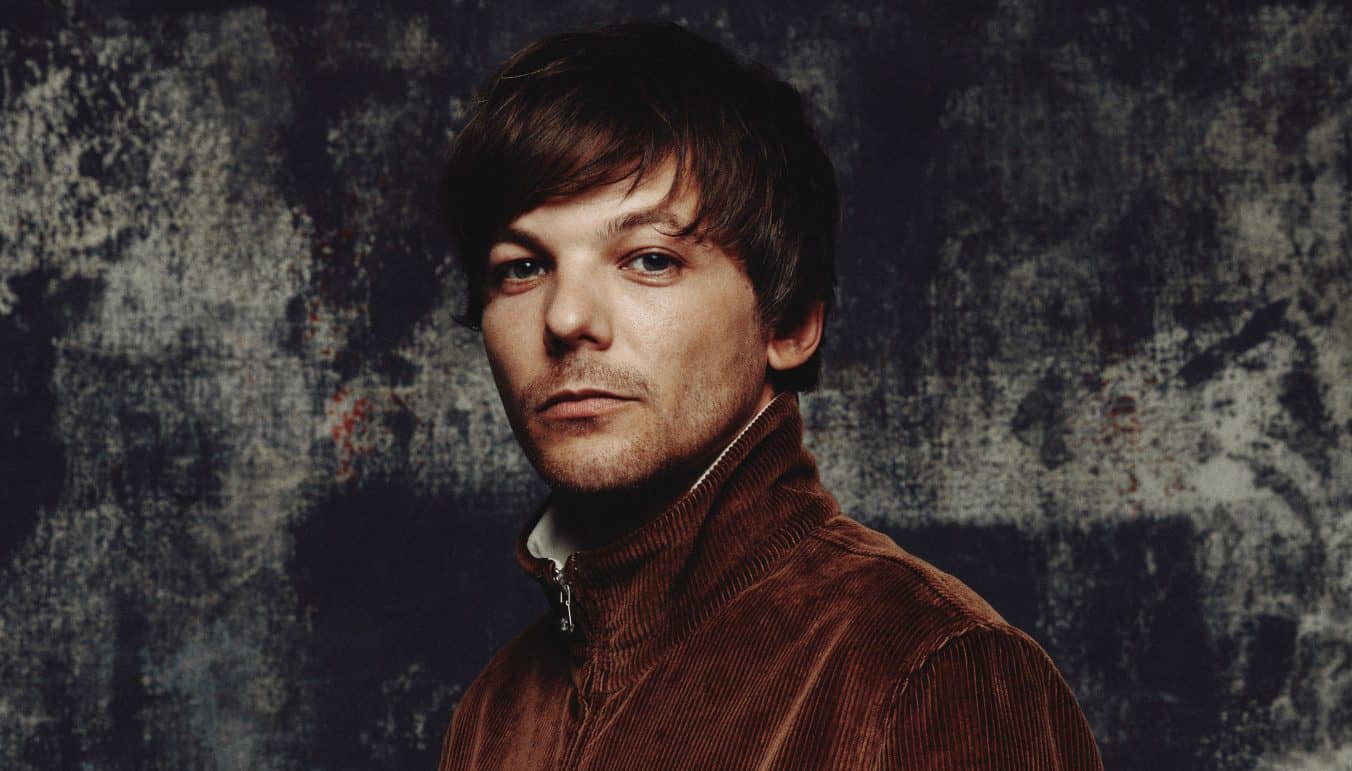 He made a couple of false starts, but after four long years, Louis Tomlinson’s debut album Walls is finally here! The much-anticipated album immediately shot to #1 on the iTunes charts in over 50 countries. And while it signals the true end of an era (Tomlinson’s the last member of One Direction to release a solo project), it’s mostly the beginning of a new one. As reflected in the visuals for the title track; where one door closes, another opens. And it’s one that was well worth the wait, as Walls promises an exciting new era of guitar-driven confessional pop.

Guitar-driven, because it’s clear that Tomlinson was sonically inspired by the 90s and 00s indie-rock that he grew up on. Confessional, because each song presents us with yet another look into the emotional complexity of Tomlinson’s experiences with heartbreak, pain, and letting go.

A clear example of the former is the opening track “Kill My Mind.” It is a rousing up-tempo song with a soaring anthemic chorus that’s just begging to be performed live. Tomlinson referred to the track as a true “statement of intent,” although it’s defiantly rockier than the rest of his album. Perhaps it’s already setting the stage for album number two.

There is “Habit,” of which the melody is weirdly reminiscent of 4 Non Blondes’ “What’s Up?” Lyrically along the same vein as “Kill My Mind,” it regales an addictive and slightly toxic relationship. Whether that’s aimed at an actual relationship, or meant as a metaphor for the music industry at large – who’s to say?

“We Made It” is another track that pulls Britpop right back into the ’20s. Significantly more laid back, the song’s mid-tempo production has somewhat of a Post Malone vibe to it. The song may not be the stand-out single of the album, it does encapsulate Tomlinson’s road to this moment. He’s made it, regardless of the adversity he’s faced along the way. Both as an underrated former member of One Direction – despite earning himself the most writing credits – and due to the personal tragedies, he faced over the past few years.

He doesn’t shy away from addressing any of these obstacles in his career. Title track “Walls” seems to be all about overcoming adversity – be it personal or professional setbacks. The string section adds a sophisticated touch to the rich instrumentals of the song, really honing in on that indie-rock sound Tomlinson is so fond of.

The heart-wrenching ballad “Two Of Us” stays true to the confessional style of the album. Tomlinson wrote the song about his mother, who passed away in 2016. It’s perhaps the most personal and vulnerable that Tomlinson has allowed himself to be on this record, and it shows in the lyrics: “The day that they took you, I wish it was me instead.” However, Tomlinson manages to yet again transform the acknowledgment of pain into an inspiring promise of honoring life. It’s extremely rare that a songwriter is able to capture both darkness and light within the same song. To do so in such a convincing way, about a topic that’s so deeply personal yet universal shows the strength of Tomlinson’s lyricism and his emotive delivery.

Interestingly enough, despite Tomlinson’s love for rock, he seems to prefer the mid-tempo tracks. “Don’t Let It Break Your Heart” includes a beautiful opening guitar solo, before adding a bit of kick drum to build a proper anthemic pop song. It’s rich in sound, and its message is uplifting and reassuring. Similar to his first solo track “Just Hold On,” its lyrics aim to inspire listeners to keep going in spite of the heartbreak. What’s refreshing, is that it doesn’t specify the cause of the heartbreak, nor does it marginalize the emotional impact. Rather, the lyrics remind you that you’re not broken beyond repair, no matter what it is that’s hurting you in the moment.

“Always You” is the only true pop, up-tempo track on Walls. Listen to it once, and the playful guitar and staccato beat make for an irresistible hook that’ll draw you right in. It’s almost odd how a song this perfect for pop radio is hidden away more than halfway through the tracklist. The lyrics are innovative, as Tomlinson travels all across the world, only to conclude he’s never getting over his ex.

Elsewhere on the album, Tomlinson addresses the loss of innocence and youth. Being in your twenties is somewhat of a confusing time, as you come to realize that being a grown-up is not all it’s made out to be. “Fearless” opens with the sound of children, then sees Tomlinson lament the innate recklessness you lose as you get older. It’s perhaps one of the only tracks that verge on disillusionment and wistful longing for those days you felt young and invincible.

“Too Young” is the other side to the same coin, highlighting the negative consequences of youthful naivete instead. This time, he connects heartbreak to regret. Accompanied by nothing but an acoustic guitar, Tomlinson reflects on a past relationship. It requires real emotional maturity and bravery to see your own flaws and mistakes and to take ownership of them. Even if it means saying “I’m sorry, I was too young to get it back then, but I get it now.” The only downside is that Tomlinson seemingly randomly adopts an American accent in the pre-chorus, which feels slightly out of place.

Tomlinson said of the record that it’s about him; “it’s me, I’m the storyline.” That definitely seems to be the case, what with each of his songs highlighting various aspects of the life he’s lived so far and the difficulties he’s had to go through. Nevertheless, there are definitely moments throughout the album that feel somewhat reminiscent of the old One Direction sound – and this is where it gets tricky. Of course, One Direction was also a part of his life, and Tomlinson was an integral part of developing the musical DNA of his former band. As such, it’s perhaps inevitable that there would be some sonic overlap between the past and his present.

On the other hand, this record is his chance to establish his own musical identity. “Perfect Now” seems to be the epitome of this split personality. It’s a mostly acoustic track, with some strings added into the mix as the song builds into its final chorus. The lyrics echo both “What Makes You Beautiful” and “Little Things,” two of One Direction’s biggest (and oldest) hits. It’s an admittedly incredibly catchy song that centers around the heartbreak of seeing someone you love unhappy. Still, it’s a shame he felt the need to cater to a sound that’s not solely his. If he truly wants to take his music in a more indie-rock lane, he should fully commit to it – surely fans (old and new) would follow.

Thankfully, the album is filled with songs that truly highlight Tomlinson’s abilities as a singer/songwriter. Two songs that stand out from the others when it comes to vocal range, delivery, and lyrical ingenuity, are “Defenceless” and “Only The Brave.”

“Defenceless” is the true embodiment of what it means to find strength in vulnerability. The song builds steadily, starting out with just a guitar before heavy drums kick in during the chorus. The lyrics, on the other hand, portray the insecurity you feel when you’re letting all your guards down. The bridge in particular highlights the fragile heartbreak that follows when trying your best isn’t enough anymore: “I hope I’m not asking too much, just wanna be loved by you. I’m too tired to be tough, just wanna be loved by you.” Tomlinson’s falsetto only serves to further emphasize the sense of defeat and raw emotion on display in this track.

The album closer “Only The Brave” sees him bring back the falsetto that’s absent from the album elsewhere. Contrary to the more confessional and conversational tone of the previous songs, this short track relies on metaphors throughout: “It’s a church of burnt romances, and I’m too far gone to pray, it’s a solo song, and it’s only for the brave.” As such, it’s a bold choice to end the album on such a different note. However, it works beautifully – an ode to what’s to come, perhaps.

Walls provides an exciting and much deserved first glance at who Louis Tomlinson truly is – both as an artist and as a human being. Listen from start to finish, and you’ll immediately enjoy the guitar-driven, intricate alt-pop that’s characteristic of this record. But if given the chance, it’ll be the emotive, authentic lyricism that truly reels you in for good.

It’s rare to see artists actually offer a multi-faceted, introspective look at their inner emotions. To have a male singer share his heart with such conviction – openly, brazenly, almost recklessly – is even more exceptional. On the other hand, perhaps it shouldn’t come as a surprise at all. Because if this album tells you anything about Tomlinson’s personality, it’s that he’s fearless, resilient, and he always gets back up. He doesn’t hide his scars – he wears them with pride, inspiring you to make peace with your own and do the same.

Let Walls break down your walls, I promise you won’t regret it.