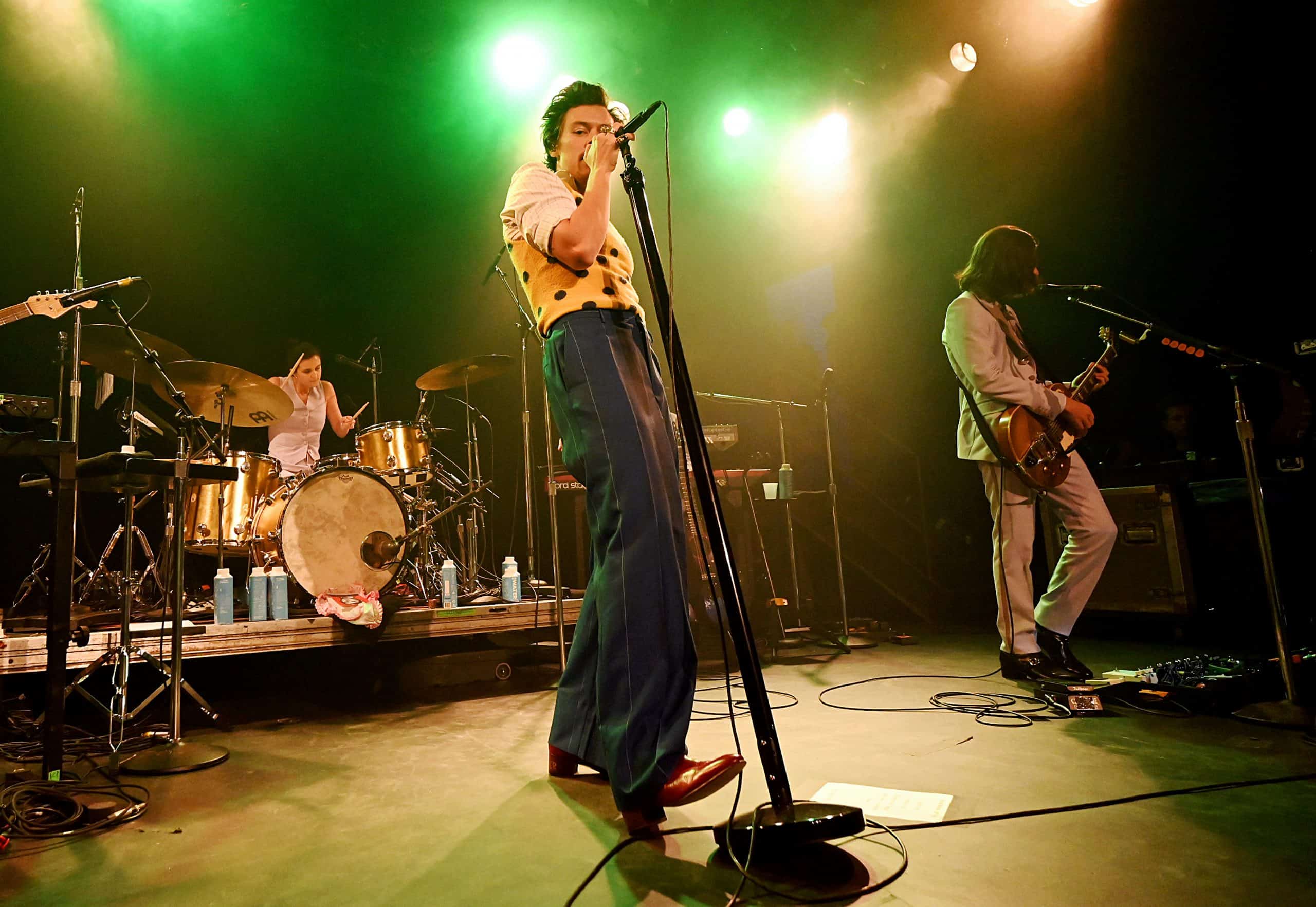 In an intimate setting with just a few hundred people in attendance, Harry Styles showed off exactly why he’s one of the hottest names in music now and proved that his sophomore album, Fine Line, deserved its platinum status that it earned in just over two months of it being released.

Styles partnered with Sirius XM and Pandora for a Q&A and mini-concert at the Music Hall of Williamsburg in Brooklyn, NY, on Feb 28. The British “Adore You” singer showed up in a yellow sweater vest, his standard wide-leg trousers, and sick red Gucci boots, to cheers from the packed room. Before singing his five-song set, he regaled the audience with stories of how much he “loves a Wawa,” what the fish from the “Adore You” music video is up to now (apparently on a gap year), and revealed what he thinks is the weirdest merch with his face on it that he’s ever seen. It was One Direction duct tape from back in the day.

But it was when Styles brought out his band that the stage truly lit up. As much as his fans love to hear him talk, they love to hear him sing even more. He started his show with “Lights Up,” the first song he released from Fine Line, and there probably wasn’t a person in the room who wasn’t shouting “Do you know who you are?” back at him. It’s this line that Styles used in promo signage all over the world in October 2019 before the song came out, and it’s become a phrase used readily among the fans.

After that powerful kickoff, he moved onto “Adore You,” complete with a little bit of dancing, and all dedicated to the fish from the music video. He then picked up his guitar for “Watermelon Sugar,” a song he’s been playing live recently, including on the Today show and late last year when he hosted Saturday Night Live. It was the last two songs of the evening, though, where Styles turned the volume on the performance up even more.

Styles continues to keep “What Makes You Beautiful,” One Direction’s original hit that put them on the map, on his setlist. He took the song and put his own rockier twist on it when he started performing it as a solo act in 2017, and it’s remained firmly part of his repertoire ever since. Every time he sings it, he invites the crowd to sing along “if you know the words” and the Sirius XM and Pandora show was no different. He paraded around the stage with a rainbow pride flag and had the time of his life with a song he’s been performing for almost a decade at this point.

He wrapped up the show with “Kiwi,” his banger of a song from his first album, Harry Styles. If I thought Styles paraded around the stage during “What Makes You Beautiful,” it was nothing compared to “Kiwi,” but I have yet to ever see this man not give “Kiwi” absolutely every ounce of energy in his body. And I’ve seen the song live more times than I can count.

Despite Styles’s high level of energy, the crowd was less so. I’ve been to see Styles all over the country and seen some of the most intensely dedicated fans ever, and maybe it was the cold weather everyone had to wait in before the show or maybe everyone was too much in a trance from Styles’s charm, but the crowd was more subdued than I would expect in such a small venue where the man himself is just feet away. Nevertheless, Styles shined as always. While he can absolutely command a stadium stage — which he did as part of One Direction for two tours — and make Madison Square Garden literally quake, Styles is just as at home on a small stage in a small venue playing for a small group of fans. It’s the true mark of a star to be able to take any stage and make it his own.

This small show comes as part of Styles’s promo for the album and the upcoming tour. He also just released the music video for his latest single, “Falling,” two days prior to the show, though he didn’t perform the song for this crowd. He’ll set out on his Harry Styles Love on Tour worldwide tour in April, playing songs from both albums, and if I’m lucky, maybe still a One Direction cover. He’s not shy about his love of his musical roots in the band, so I’m hoping he still carries it with him on this tour.

We’ll have to wait to see what else Styles brings to the stage when the tour kicks off, but it’s safe to say the show will be nothing short of energetic, emotional, and fun. Styles, a charismatic and talented beacon of light wouldn’t have it any other way.