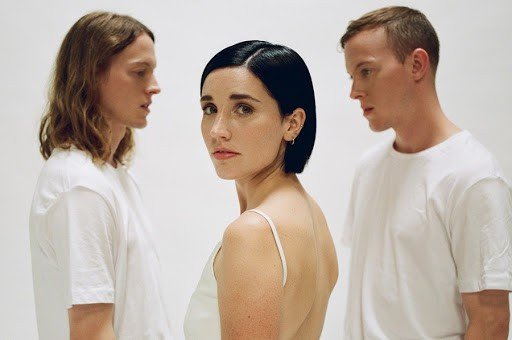 Formed of twin brothers Max and Spencer Ernst and Chelsea Lee (now married to Spencer), SHAED are a strong example of how emotional intimacy can birth marvelous creativity.

The electro-pop trio’s 2018 breakthrough single “Trampoline” went stratospheric, racking up hundreds of millions of views, and then later evolving to include a collab from ZAYN (which added even more rocket fuel). Since then, SHAED have released the EP Melt, teamed up with Snny, Sting and Steve Aoki on new tracks, and are working on an album.

We spoke to Spencer about working with big names, writing “Trampoline”, their favorite part of touring, and the news that they’re working on an album.

You’ve collaborated with some huge names, like Sting and Steve Aoki on “2 Million” and ZAYN on “Trampoline”. How did these partnerships come about?
Yeah we have been blessed with some amazing collaborations. For Zayn, we were in Japan and throwing around feature ideas for Trampoline and his name came up. It honestly was a little bit of a joke because we never thought in our wildest dreams that he would ever do it. But our team reached out to his and a week later we had all of Zayn’s vocals in our email. We couldn’t believe it – his vocals add so much to “Trampoline”. For Steve Aoki and Sting, Steve’s team reached out for us to be a feature on a song with Sting and the rest was history. Sting is one of our biggest influences and we love Steve Aoki so we didn’t hesitate.

Speaking of “Trampoline”, the song was hugely successful – racking up almost 160 million streams on Spotify alone. When creating the track, did you know it was going to make the noise it did?

No, we didn’t. Obviously we wish the best for each song we create, but no we didn’t realize it was going to have the success it has.

We have been so close for a long time. I honestly can’t remember a time before the trio. It’s easy to be vulnerable and honest throughout the writing process because we are so close. We can be ourselves with no judgment.

When touring, your favorite part of each show?

Every single second. But my favorite, favorite would have to be the first moment we three look at each other on stage with the same goofy ass smile just in disbelief that this is our life. Then the moment we look out at the crowd and see people singing our songs and enjoying the moment.

What advice would you give for musicians hoping to write a hit?

Don’t try to write a hit. Write something that is genuine and true to you.

What’s next for SHAED

We are currently hard at work on an album! Also getting ready for our first European tour in March.