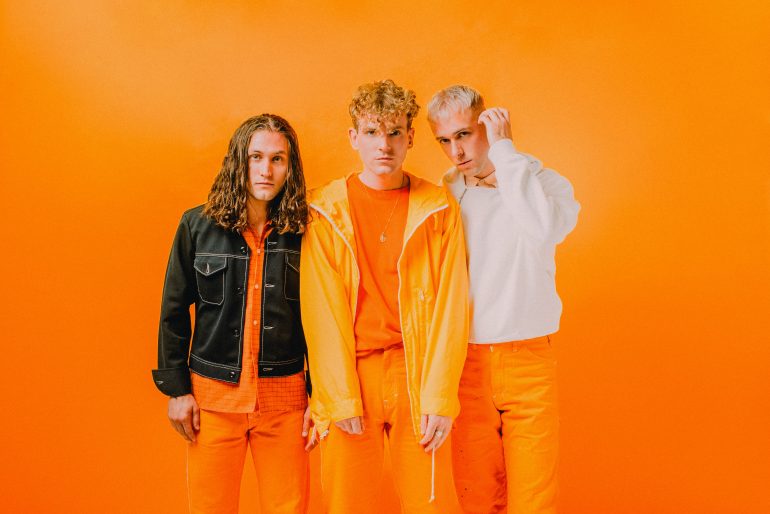 We spoke to COIN lead singer, Chase Lawrence, a few weeks before the release of their third album, Dreamland, to deep dive into the process behind creating it, the story behind the title, collaborating with Foster the People, and much more.

You’re gearing up for the release of Dreamland [released 21 February]. How are you feeling? Excited? Nervous? A heady cocktail of both?

I think excited, yeah. It’s been a long time. I’ve been making this album for three years. We were so inspired by the touring of the second album that we made this album in green rooms, hotel rooms… any chance we got, we were recording. These songs are such a part of me now. It’s been very special to watch people give meaning to these songs [from the second album]. I’m maybe a little nervous. But yeah, I’m ready.

How do you think this record consciously differs from your previous LPs?
The process of making this album was so different from the last two. The first album we did traditionally; went to a studio to make and produce it. The second album we worked with a litany of producers, amazing songwriters. Third album, we went back to our roots; we went to the place where we started the band and my bedroom. We didn’t actually use any studios at all. We did everything together, just the three of us. We had some collaborators too. Some people helped us out with the recording and songwriting a little bit, but for the most part, 90 percent of this album has just been us. We did what was right by us… and wrote the songs we wanted to write. This album was so much of an emotional album for us. In the past, we put the fans first. Well, maybe not so much the fans, but sometimes you wonder, what does someone else wanna hear? This album’s entirely different in that we made it for ourselves.

Where did the title Dreamland come from?

We’ve toured a lot the past three years, and I’ve been gone quite a bit. I have a house in Nashville and I’ve spent all of five nights there [laughs]. I came to my hometown where my parents are, and I found out my cousin got married, my sister moved away, I’m finding out all this information second-hand. This man is listening in to our conversation, and he chimes in and says: “Son, you must be living in dreamland!”
It hit me so hard – my life’s been completely on pause while I’ve been gone. I’ve come back and realized that life doesn’t stop. I wrote that album in that headspace.

What makes you most excited and scared when releasing new music?

For this album specifically, these songs are so new to me emotionally. The album’s been our journal – the three of us – and conceptually, it’s a lot about how we felt about the band, how we felt about our personal relationships, each other. We’re settling this stuff with songwriting. We’ve felt this way, so I know that somebody out there is going to relate and feel the same way too. Sometimes you wonder if it’s too personal. We released a song called “Let It All Out” in November. It’s truly the most personal song. It’s hardly a song, it’s more a note from my iPhone Notes. It’s amazing that it even rhymes because it was just listed straight from my subconscious. I had to release it because I knew it meant so much to me. We performed it live for the first time the other night. It was wild to see the meaning people had already attached to it. I’m trying to get over that feeling of uneasiness and realizing that if I felt good, somebody out there will feel good.

At the end of the day, if you’re being honest, nothing else really matters. That’s what I’ve really tried to do with my songwriting.

That must have been super cathartic.

I didn’t know I could express myself in this way. I don’t even need to go to a therapist – this album has been my therapy.

You collaborated with Mark Foster and Isom Innis from Foster the People on the new record. How did the collab come about?

Our A&R at Colombia, I’ve worked with them for years and we’re close friends. They connected us and we ended up in the studio together. Well, we just worked at the house, we didn’t even use any studios. It was nice, it was so natural. We came out with some very special songs.

How did this partnership influence the album?

What was so cool about working with them is that we had these songs we thought were done. We took [the songs] to [Mark and Isom] and they were like, “Hey, these aren’t done.” They took the ceiling off this house we thought we’d built and made it into a skyscraper. They started adding sections and pulling out amazing production tricks that we’d never known. This was so early on in the process. We’d done the first three or first songs on the album – creating wise, recording-wise – and it was so important to my process. Sonically, they helped me define exactly what we wanted to do for the rest of the album. I’m so thankful for that time. Their effect was so lasting even if they only worked on four songs.

How do you hope this album will make people feel when they listen to it?

Oh man, that’s a great question. I think I’ve been living in suspended reality for the past three years. Not only have I been physically gone, but I’ve been mentally gone. I’ve been staring above myself for the past three years, figuring out how I’m trying to tell this story, rather than thinking of the story you’re actually in. I think people do this often. To me, that’s what Dreamland is. There’s nowhere else you should be but here. I want people to feel here.