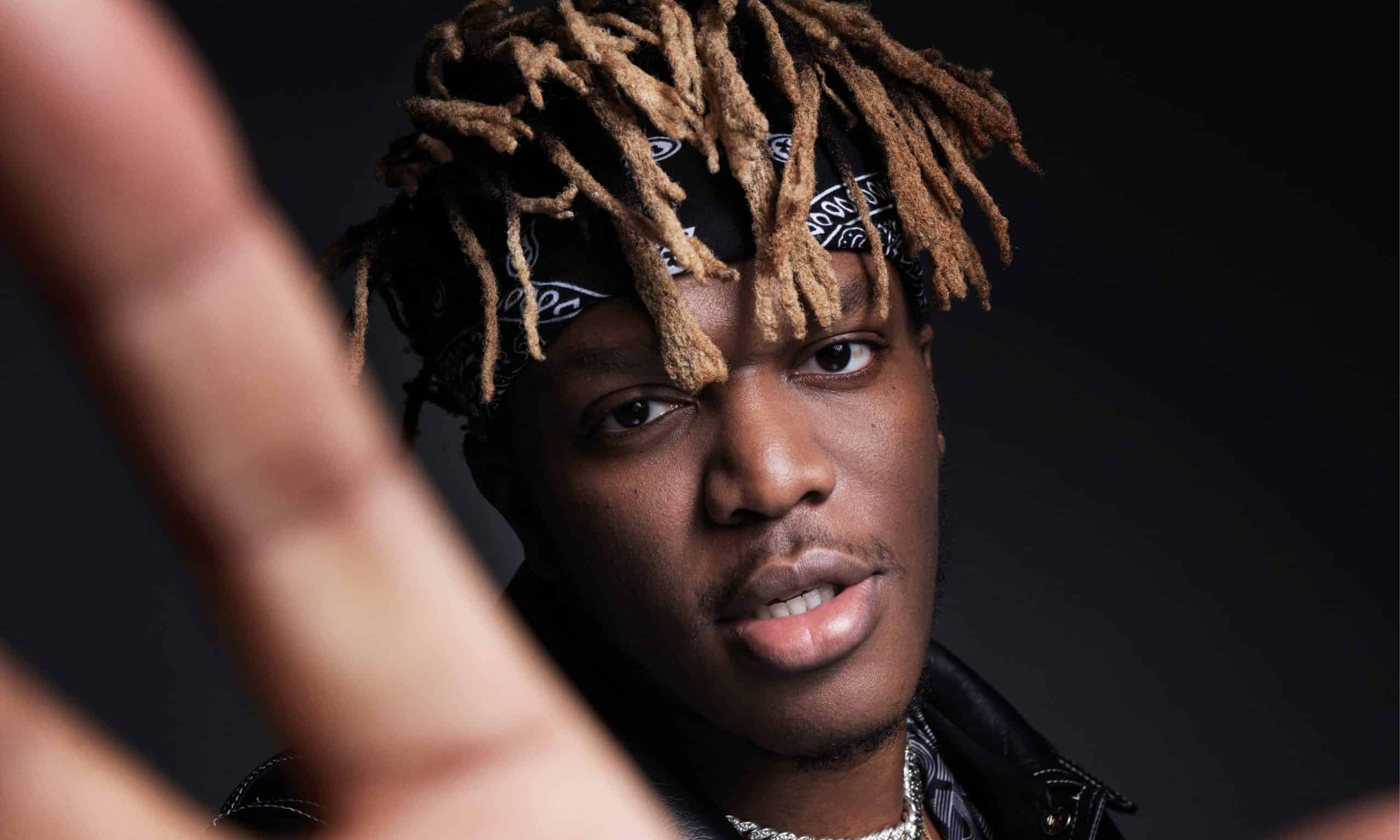 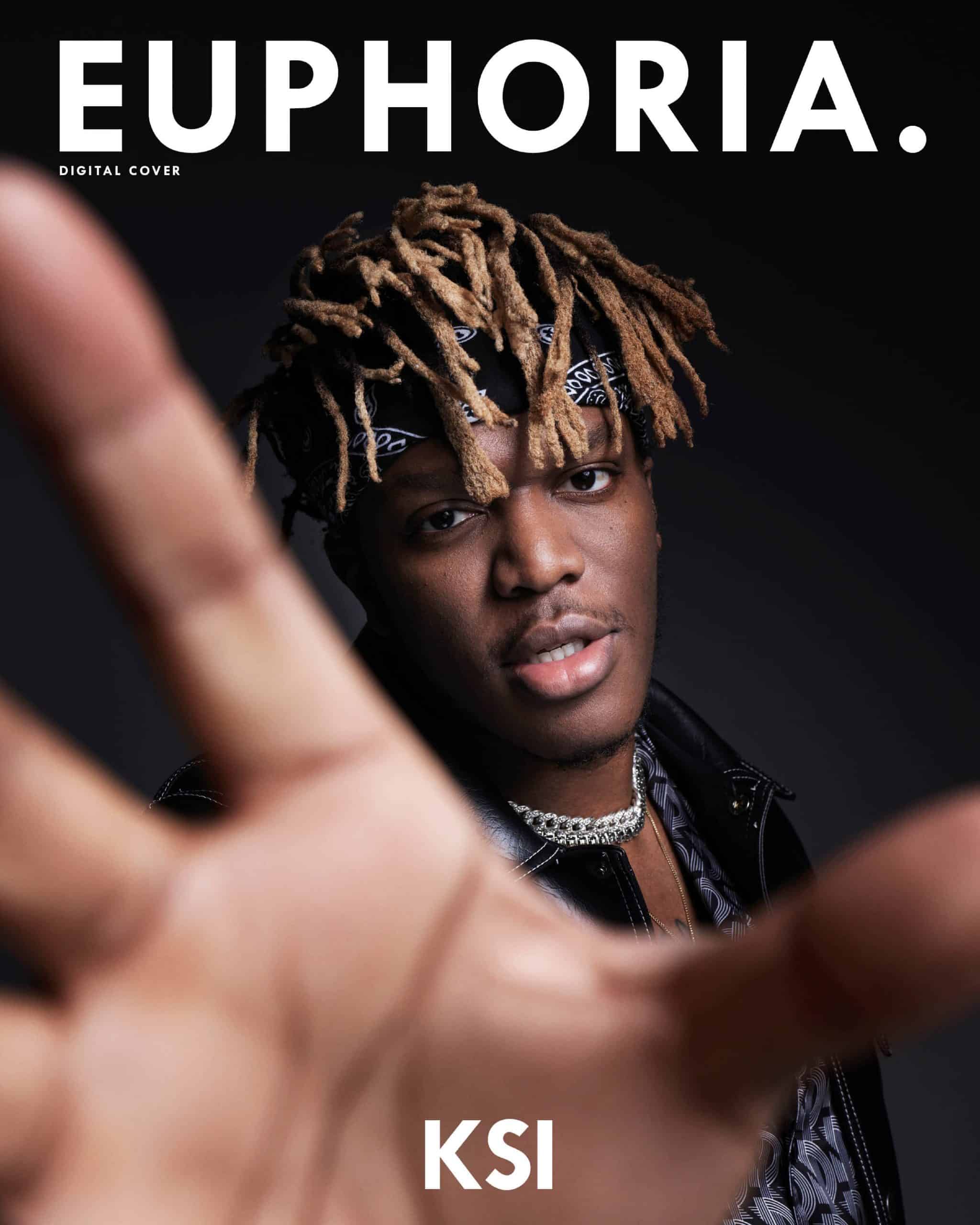 Watford-born YouTuber-Musician-Boxer-Filmstar Olajide Olatunji, better known as KSI, might make funny videos online but when it comes to music, he’s not here to mess around.

The title of his latest song, “Wake Up Call,” featuring rapper Trippie Redd, is not by coincidence. “It’s called “Wake Up Call” for a reason, you know,” Olatunji says, “I’m finally telling everyone ‘Wake up, I’m here!’ and I’m here to stay.” Olatunji’s rise from uploading videos of himself playing FIFA to making songs with the likes of Rick Ross and Lil Baby, as well as UK-rap veterans JME and P Money, has been nothing short of remarkable.

“I feel like people should look at my journey and be inspired,” Olatunji says. “I literally started from nothing, zero. I had no help from anyone, no industry behind me, no rich parents. I literally had me, a YouTube account, and I worked my way up.”

“I’m able to do shows that sell out in minutes, I’m able to have a fight and have millions watch it worldwide, I’m able to do a book with my friends and have it be a number one bestseller, I’m able to get a top ten in the charts.” Olatunji is many things, but modest is not one of them.

But, if you were in Olatunji’s shoes, perhaps you wouldn’t be modest either. Just 26 years old, he started his YouTube account in 2009. His channel now has almost 21 million subscribers, making it the third-most followed music channel in the UK behind Ed Sheeran and One Direction.

“People like Jake Paul kind of ruined [music] for the rest of us,” Olatunji says of the industry’s attitude to YouTubers looking to branch out. “He did a collaboration with Gucci Mane [2017’s “It’s Everyday Bro remix”] and it just didn’t do anything. If anything, it fucked Gucci Mane’s career.”

Olatunji, of course, has a long and storied history with the Paul brothers. Their online beef stretches back into the YouTube ether. He’s even fought Logan, the elder Paul, in two boxing matches and beaten him both times – the first time by TKO and the second time on points.

From the outside, it’s easy to be cynical about YouTubers pivoting to music. They have ready-made audiences with a voracious appetite for content and will eat-up anything released by their favorite online stars. For Olatunji, though, his music career isn’t a temporary experiment, it’s a critical element to his self-expression.

“I’ve always loved music,” he says. “I used to use music when I was younger to help me remember things at school and I’ve always heard beats and then started to write some lyrics to it, even if I was just messing around with my friends.”

“When I started out [doing music], it was a bit jokey but also, like, ‘let’s see what happens with this’ and it took off, people fucked with it,” he says. “I was like ‘I’m going to do this seriously’ and I’ve been trying to incorporate my personality into telling stories, and to tell people my situation, and letting people know what’s going on through my music.”

“Wake Up Call” has a celebratory tone. Trippie Redd’s chorus is melodic while KSI’s verses are impactful with their lyrics, and well-judged on the beat. The beat, however, is the star of the show. It’s complex and the synth-driven chorus will be stuck in your head for days on end. If you hadn’t heard of KSI beforehand, you’d assume rap was his full-time vocation.

His previous single as well, “Down Like That,” is similar to a lot of commercial rap coming out of the US. There’s a strong bassline, an infectious chorus, and some heavyweight features including Rick Ross and Lil Baby.

While this might make KSI’s music sound unremarkable, “Wake Up Call” and “Down Like That” are a far cry from his early work. On his first single, 2015’s “Lamborghini,” Olatunji sounds like an excited fan who doesn’t quite have the confidence to really express himself. He raps “I’m fully gassed yo/ Vroom vroom in my brand new Lambo/ Juiced up/ and I don’t give a damn yo“.

However, listening to KSI’s recent work, it’s clear that not only has he grown in confidence as a rapper, but he’s also actually a very good one. There’s a harshness to his delivery, his voice is deep and gravely. His flows, on the other hand, are smooth to the point of almost being languid. It’s a style fans of Giggs and Rick Ross, for example, will find familiar.

His lyrics have also grown in complexity. “Swimming in money they said I’d never earn/ Kicked out of school, they said I’ll never learn/ Now I learn and make it count/ Multiply, division, and making a high amount” he raps on “Wake Up Call.” While on “Down Like That” he spits “Always come through with a B/ Got to do a lot to trouble me/ Visionary still won’t tunnel me/ Me to you, now that will chuckle me.”

Perhaps unfairly, when one thinks of a YouTuber turned musician, one imagines fandoms full of prepubescent teenagers willing to risk life and limb for their idols. KSI’s fans aren’t like that.

“The crowds [at his shows] really vary from young to old, you get some people as young as seven or eight and as old as, I’d say, 28 or 29,” he says. “It’s cos I’ve been doing it for a while and like some people have grown up with me and there are new fans as well. It really varies, but I’d say the majority are like 16-22.”

“I don’t make music for kids, you know,” he says defiantly. “I’m swearing, I’m saying the n-word a lot. It’s not for kids but kids like it. That’s not something I can control, I can’t control what people like. I make music for me.”

It doesn’t matter whether you like KSI’s music or not – you’re going to be hearing a lot more of it in 2020. “Wake Up Call” seems almost destined to replicate, if not better, the chart success of “Down Like That” which peaked at #10 in the UK charts.

An album is also in the offing for 2020. “People aren’t going to expect what it’s going to be like,” he says. “I’m going to have features on there that like people just won’t expect. People didn’t expect “Down Like That” with Lil Baby, Rick Ross, like I’ve shocked a lot of people with those features, and people think that’s it but I have huge features already sorted.”

You’ll also be able to catch a glimpse of KSI at festivals this year. His Parklife set has already been announced and he promises that it won’t be his only appearance in fields around the UK.

“People thought they’d be able to just get rid of me but I keep popping up and getting in people’s faces,” he says. “In the verses [on “Wake Up Call”] I’m like ‘funny init/ now they wanting to get it/ now they wanting to visit.” All these people want to jump on the bandwagon now they realize ‘oh ok, this guy’s where it’s at or he’s popping’ I’m just like, it’s funny init.”

From my time talking to Olatunji, however, it’s clear that his plans for 2020 and beyond are no laughing matter.