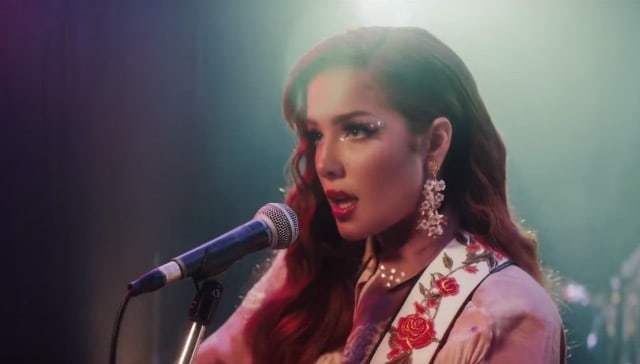 It seems as if Halsey’s forthcoming album manic sees her explore a whole new side to music. Instead of relying on darker, gritty productions that emphasise the smoky undertone in his voice; this new era is showcasing Halsey’s light and airy tone instead, accompanied solely by guitar-picking and slow beats.

Latest single ‘finally // beautiful stranger’ feels like the natural progression of taster ‘clementine’ that was released earlier this year, what with both songs being much more acoustic. In fact, ‘finally’ takes a bit after Lady Gaga’s classic “Yoü & I”, particularly in the verses. Or perhaps Halsey has taken a leaf out of Taylor Swift’s book, letting her real life romance(s) inspire her to write her ‘first ever love song’. Because instead of focusing on heartbreak, the track focuses on what happened before that – the falling in love.

Sonically, the soft and sweet, stripped-down song only contribute to that feeling of exhilarated fragility. The fact the lyrics seem so personally tailored to Halsey’s own experience makes it feel even more intimate as she confesses she finally feels safe enough to fall in love – that she’s trusting someone with her heart after all this time.

The accompanying video showcases yet another side to that dynamic, as we see Halsey performing the song both as an entertainer and completely on her own. Everyone puts up a front – be it a celebrity or not. To show yourself fully, to trust someone with your insecurities, your flaws, your entire self, that takes a lot of courage. And falling in love requires you to be at least a little bit brave with your heart; you need to allow yourself to be seen.

Clearly, Halsey is now allowing her fans to also see a different side to her through her music. “Finally // beautiful stranger” might be Halsey’s first-ever love song – it’s a really, really good one.