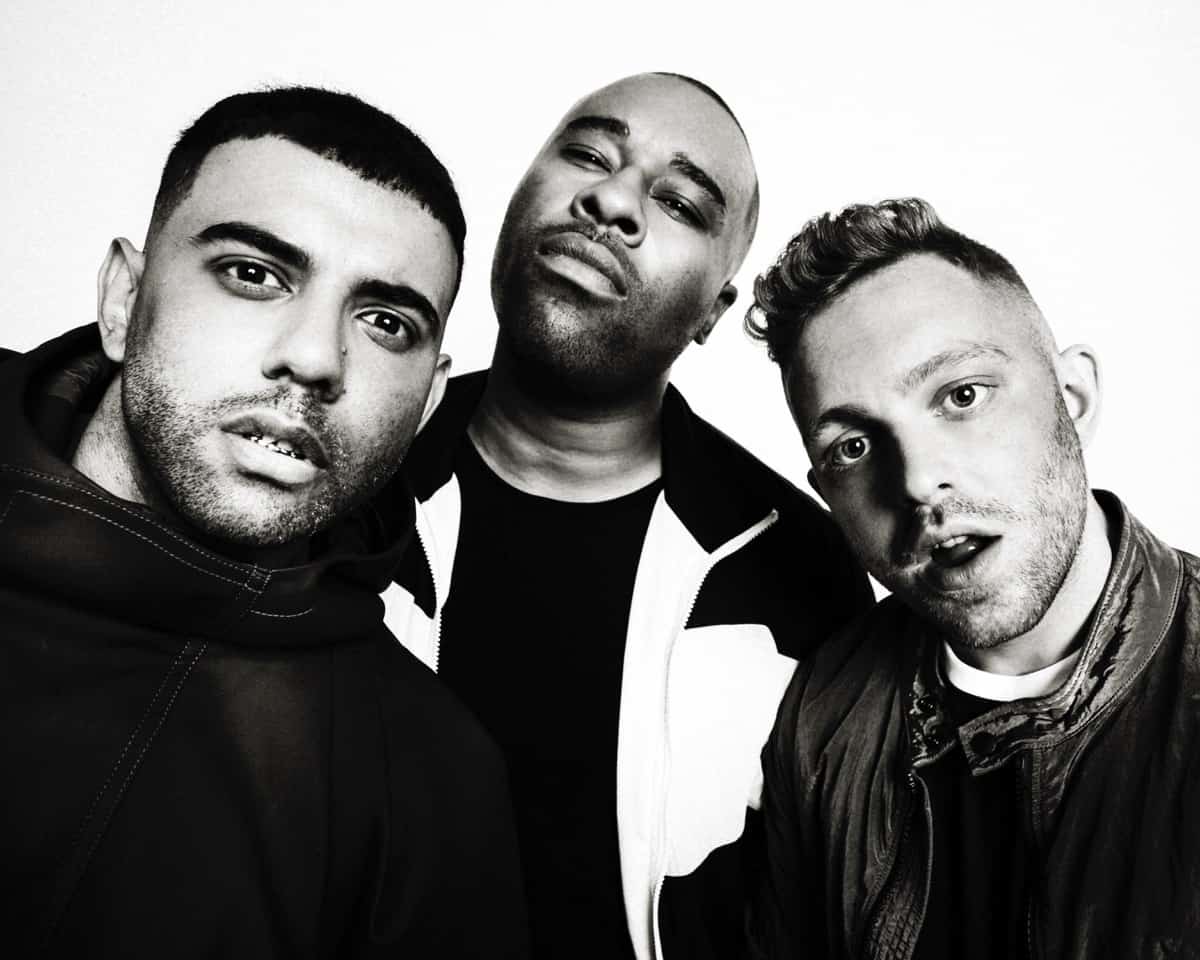 You might not have heard of South London-based rap group The Manor, but chances are you’ve heard their music before or after a night out. “We got our Spotify analytics back and most of our songs are played between midnight and 6am,” chuckles Jonny Dutch. “Our stuff is all about having a good time, and that’s what we want to do.”

The Manor is comprised of three MCs: Scotty Stacks, Danny Graft, and the aforementioned Jonny Dutch, who also sings. However, while they may appear to be a rowdy bunch of lads who happen to have a talent for rapping, there’s a lot more to The Manor than drinking and partying.

They’re a group that refuses to be pigeon-holed. Their sound has been described elsewhere as a “mix of UKG, grime, soul, and rap,” but even this broad representation doesn’t do them justice. 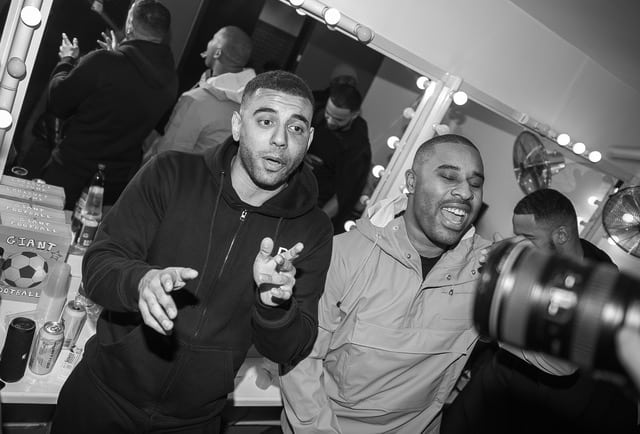 “I’m a big Jamiroquai fan, as it goes,” explains Dutch. “But I’m also a massive Kano fan because we grew up in the original grime era with guys like Wiley and Kano. But we also grew up with house, people like Wookie and EZ. But also me and Dan [Danny Graft] are massive indie fans as well, so really it’s a bit of everything which I think you can hear in the music.”

You can certainly hear a range of influences on the group’s latest track, “Swazz”. Produced by Splurgeboys (who have worked with Skepta, Tinie Tempah, and Ghetts among others), the track starts with Dutch lamenting over a (presumably ill-fated) night out.

Then, almost without warning, the beat switches. It’s fast, with aggressive, moody synths and lashings of sub-bass. Scotty Stacks launches into his first sixteen bars boasting, “Spin a man round like Taz / Young prince I got the moves like Naz / And a big set of bollocks like Baz.”

The track continues with the three MCs going back-to-back, taking it in turn to deliver sixteen bars, loaded with humorous quips, sharp wordplay, and references you’ll seldom hear from other rappers. “We do more / Roger Moore / Sean Connery / Trust me the rap game / Lottery,” spits Danny Graft in his distinctive South London accent, “Sitting in Ushuaia looking like I won the lottery / DJ Luck nah there ain’t no stopping me.”

Graft, for what it’s worth, is an extremely atypical MC. He’s short, white, and, to most people, sounds like he should be selling flowers on Columbia Road rather than rapping. “There’s definitely stereotypes over what Dan’s supposed to do as a white rapper,” explains Dutch. “But also what I’m supposed to do as a black rapper and Scott as an Asian rapper.”

In fact, these stereotypes played on the group’s minds when releasing “Swazz”. “We were slightly worried about releasing it through GRM Daily,” says Dutch. “Their audience isn’t really used to stuff like us, they focus a lot more on drill and trap.” 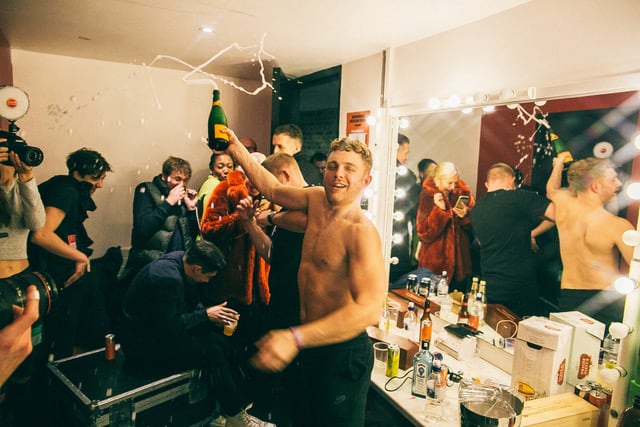 So far, however, the song has attracted almost 300,000 views on GRM Daily, and almost half a million plays on Spotify. Perhaps Dutch is being modest when he says he was “really pleased with the reaction.”

It’s not the first time that the group has done something out of the ordinary, however. In April, for example, they launched a podcast series. Entitled ‘Free the Geezer,’ which accompanied their seven-track EP of the same name and saw the trio – alongside a host of celebrities and experts – discussing topics ranging from relationships, drinking, drugs, and gambling.

“It was great to have a platform to talk about some of the issues that are big problems in society,” says Dutch. “We felt we had a responsibility to use our platform to have a chat about this stuff.” The podcast revolved around fans of the group sending in questions or stories to be discussed and hopefully resolved with the help of a sit-in psychiatrist.

At times, the podcast is laugh-out-loud funny, with the trio recounting anecdotes of nights out and sticky situations they’ve found themselves in. However, it is also touching, open, and honest —  unfamiliar territory for a lot of rappers. “These are issues that affect us as well,” says Dutch. “We started doing the podcast around the time that my girlfriend got diagnosed with cancer. She’s got the all-clear now thankfully, but Scott and Dan had their own problems as well.”

Naturally, when it comes to live shows, these problems are placed on the back-burner for a night of fun and managed mayhem. “It’s like Carnival mixed with England in the World Cup Final,” says Dutch. “There’s nothing quite like it.” 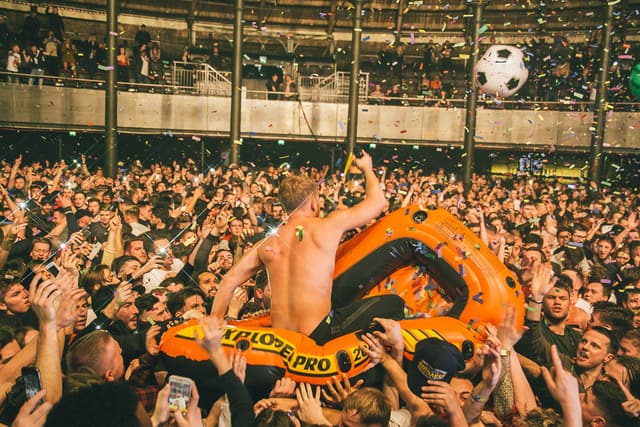 Most recently, the group were supporting The Streets on their UK tour. “It was unreal,” says Dutch. “He [Mike Skinner] was one of the first big names to give us any sort of recognition when our first tape came out [Welcome to the Manor, released in 2011], and then he obviously kept an eye on us. To get the call from him was crazy.”

In fact, while Dutch and the rest of the Manor boys were worried about Streets fans not taking to their music, the three Brixton gigs “were like a mini headline show for us,” says Dutch. The group’s own headline shows have garnered a reputation for being rowdy. “Nothing gets out of hand, though,” says Dutch. “Everyone is there to have a good time.”

Although not everyone, it seems, was impressed. “We actually got blacklisted from a lot of festivals,” says Dutch, explaining the relative lack of appearances last summer. “People thought that we were lairy and that wasn’t what they wanted. That’s really not the case and nothing bad has ever happened. We played the 1Xtra stage at Reading and Leeds and not many people were expecting our kind of music there but everyone had a great time.”

Fortunately for festival-goers, it appears the blacklisting is a thing of the past. The group is already booked for the Isle of Wight festival, and Dutch is quick to say “we’re doing most of the festivals this year, which is great.” 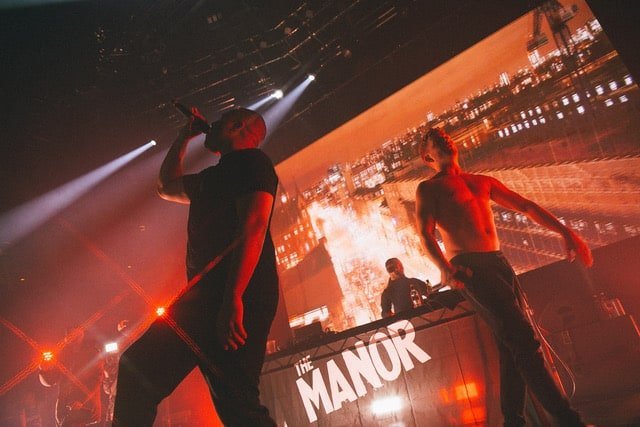 Britain’s venues will also have to brace themselves for an upcoming tour “We’re going to be doing more dates and taking The Sesh [the group’s signature invite-only events, the most recent of which was DJed by Mike Skinner himself] around the country,” Dutch excitedly reveals. “I can’t say where exactly, but it’ll be going to a lot of places.” The first stop of this nationwide Sesh is in Brixton on 21 March.

There’ll be more music, as well. “I’m actually off to the studio in a minute with Scott to work on the follow-up to Swazz,” says Dutch. He can’t say what the track will sound like but, rest assured, it’ll sound different to most other UK rappers. “We want to make music that celebrates being normal. Whether that’s going out on the weekend and having a good time, or going to work doing 9-5,” says Dutch.

If being normal sounds like The Manor, we’re already looking forward to an extremely normal 2020.