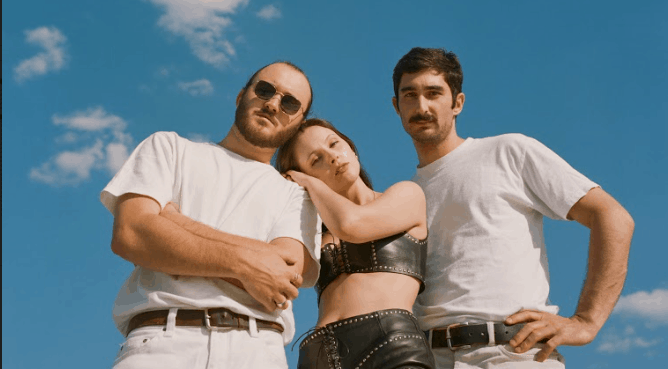 Australian indie pop band San Cisco have returned with “Skin”, a sun-kissed bluesy number that toys with the last glimmer of hope that remains just before ultimate heartbreak. Praised by critics and fans alike, the trio consisting of Jordi Davieson (vocals, guitar), Joshua Biondillo (vocals, guitar) and Scarlett Stevens (vocals, drums) have been a festival staple across Australia and abroad since their debut album back in 2012. Newly signed to Nettwerk Records (home to Angus & Julia Stone, Father John Misty and more), the band have been prepping for their upcoming album set for release next year.

We had a chat with Scarlett about juxtaposing lyrics and sound, working collaboratively, band member changes, and what’s to come.

Hiya! It’s been a hot minute since the name San Cisco crossed my path. What have you guys been up to this year?
Hi there! We have been busy recording, writing and putting the final touches on our album. We did a US tour in July and played a gig in Central Park and signed a record deal with Nettwerk records!
Your latest track “Skin” explores some seriously melancholic and nostalgic heartbreak while still remaining quite blissful, sassy and triumphant. Did this come quite effortlessly or was it a stylistic choice to remain a bit optimistic?
It took a lot of experimentation and creativity to get the song to where it’s at now. It started off as more of an upbeat disco tune with a riff that Josh had, and the lyrics were way more pop-y. Then we slowed it right down and that just changed the mood of the song completely. It lended itself to the more somber and reflective themes you hear in the lyrics. Once we had the mood of the song figured out the lyrics came really quickly for Jordi and it just kinda wrote itself. I think the big rock guitars and strings give it an optimistic pop feel and we always like to juxtapose sobering lyrics with happier sounding instrumentation.
The production of “Skin” enlisted the help of your long-term collaborator Steven Schramm as well as Broderick Madden-Scott and POND’s James Ireland. What’s it like working with some pretty influential names? Do you ever find it difficult to create with others?
I think there are always challenges that come with working collaboratively, you have to be really open and non judgemental of people’s’ ideas. There’s a lot of brainstorming that goes on and a lot of give and take. We’ve worked with Steven for as long as we’ve been a band so we are very comfortable making music together with him, and James and Brod are local to Fremantle where we live and so it felt very natural to work with them on putting some final touches on the song. I think they brought something different in the mixing stage which we really liked.
You’ve recently joined forces with Nettwerk Records, very exciting stuff! How did this signing come about?
They were given a sneak peak at the new album and really loved it. They’ve always been a fan of the band and we finally got to meet up with them in the states this year and after that we signed on which we are thrilled about.
You’ve had quite a long and complicated history as a band with name changes, member changes, label changes. What have been some staple elements and clear changes in the San Cisco style?
From my perspective the last ten years has been an incredibly consistent experience as a band. We changed our name to San Cisco when we were teenagers, from King George. We’ve always been an independent band in Australia, meaning we don’t have a record label here, we do it all ourselves. After our long term bass player Nick Gardner left the band in 2017, Jennifer Aslett joined for most of 2018 but this year has been really busy touring with Stella Donnelly. Since album number two it’s pretty much been myself and Jordi and Josh in the studio and now we want to really reflect that in the imagery we use as a band by showcasing the core members.
San Cisco has been a very common addition to festival lineups. What has been your favourite/standout festival experience so far?
I really enjoyed playing Groove in the Moo because you have a chance to get to know other musicians on the lineup as it’s a touring festival, so it’s always a real treat! Another festival I loved playing was Lollapalooza in Chicago. It was the first big international festival we played as a band and i remember being shocked and humbled by the amount of people that came to see us in this foreign city.
“Skin” is just the first taste of your album to be released next year. What can you share with us about the works?
We are really proud of this next album! I think this is the best work we’ve made to date. Definitely more mature and considered but with the same pop sensibilities we are known for. We recorded it in Fremantle and Mullumbimby over the last couple of years and it’s definitely been a bit of a journey. We are super excited for our fans to hear it and can’t wait to get it out there!
Start typing to see results or hit ESC to close
new music music interviews Interviews interview music video
See all results