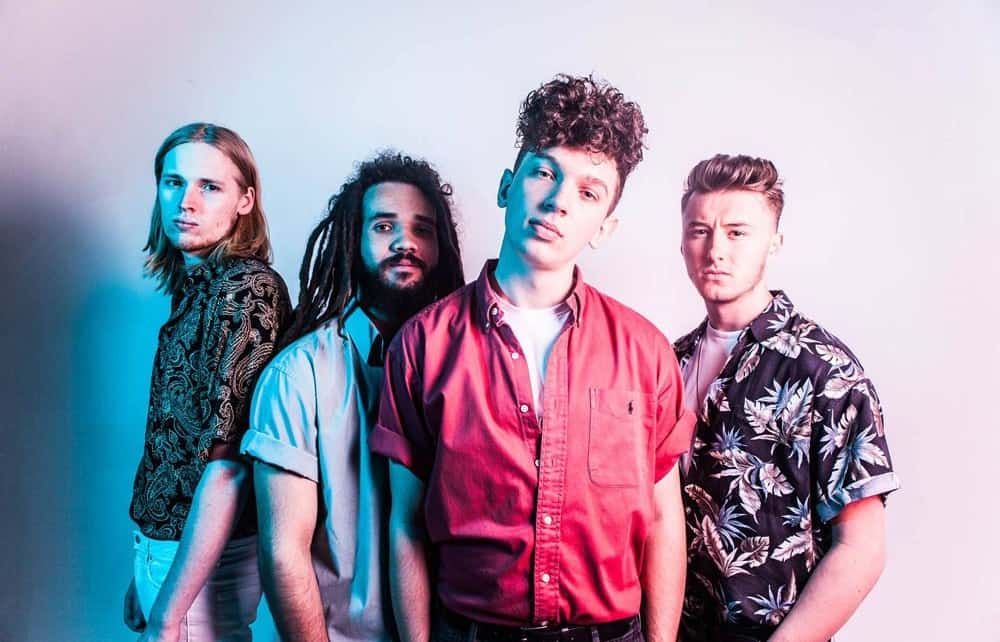 Manchester indie-rock outfit Larkins have been ripping up the rulebook and defying expectations ever since they released their first single “Hit and Run” back in 2015.

The band are currently in the midst of an extensive UK tour, but the band’s bassist Henry Beach found some time to catch up with us about life on the road, their hopes for the future & more!

How integral is the live aspect of what you do to the band? And what do you want fans to take away from seeing you live?

We are, it’s going to be the biggest tour that we’ve done so far! Getting out and playing is really important to us, we definitely view ourselves as a live band and put a lot of effort into all of our shows. In our early days, we just wanted to play as much as we could and loved that connection we get with everyone when playing live and we’ve just kept that with us. I think we want everyone that is at our shows to see that we give it everything we can every time and encourage them to do the same!

Speaking of playing live, earlier this year you sold out Manchester’s 2000 capacity Albert Hall; a ridiculously impressive feat for a band without an album out. How was the process of deciding to attempt something as ambitious as that? And how did it feel to headline that iconic venue?

[Laughs] I can safely say it was one of the best nights of all our lives! It’s always been our favourite venue in town and somewhere that we dreamed of playing when we started. We’ve always loved playing our hometown shows and for the past few years we’ve really pushed ourselves to play the venues that we want to. Before Albert Hall we sold out Academy 2 which means we doubled in capacity! At the time we were thinking about playing Ritz but we knew if we pushed ourselves we could sell out Albert Hall. It was a bit of a risk but it turned out to be one worth taking!

EUPHORIA just caught you at the Moth Club supporting Love Fame Tragedy, a solo project from The Wombat’s lead singer Matthew Murphy. How was the experience supporting him? And, in contrast to headlining, does supporting someone come with a different sort of pressure?

To be honest it was a crazy one for all of us. Wombats are a band that we are all really into, even way back before we started the band and the LFT tunes are just as good! Murph has wrote some of our favourite songs ever so getting to meet him and play at his show was surreal. In terms of playing support shows though we don’t treat them any differently than we do our headline shows. It’s like I said before we make sure that we throw everything we can at every show, no matter what it is or where it is.

You’re from Manchester, and it seems traditionally that some Northern bands have noted a significant north/south discrepancy in their fans and willingness of media outlets to engage with them in a positive way. Have you had any experience of that?

We definitely did in our early days even though we are starting to notice it change now. When we first started travelling we noticed that the further south we go the harder it is for an indie band like us to get the crowd going and the shows were always a bit of struggle. Now that we’ve been playing gigs down south for a while and started growing our own fan base though there isn’t much of a difference anymore. Our past few London shows have been some of our favourites.

Your tracks “TV Dream” and “Something Beautiful” seemed to have really resonated with fans. What do you think is it about those songs that’s made them resonate with so many?

I think that “Something Beautiful” was the song where when it was finished, we all knew we had started to really find our sound. So when it then got the biggest response we had ever had from a release it was kind of what we expected, we knew it was the best song we’d wrote! We managed to take it up another level with TV Dream, recording with Chris Zane for the first time was a great experience and he helped us take the track to a standard we’d never reached before! I think that coupled with the lyrics that were very relevant with what was happening in the media at the time, and still are relevant, the track just took off!

On your Live At The Albert Hall live album, you can hear how frenzied the reactions are to your set. During the creative process, do you ever think about your music’s intended audience, and how the tracks will translate to a live setting?

Definitely. Pretty much every song we write is for our live show! We really enjoy recording and production on our tracks but those big shows are in the back of our mind. We are always imagining how the crowd will react to certain sections and which parts of songs we will be looking forward to playing. Sometimes we’ve even wrote tracks with a vision of where in our live set we’ll play them.

Finally, what are the things that you hope to stay true to as the band grows and develops?

I think that we’ll want to make sure the atmosphere in the band stays the same. We’re all really close to each other and our core team that travel with us and we would never want to lose that. We enjoy working with other people and getting a lot of input and I think sometimes people start to feel like they get too big for that!
Start typing to see results or hit ESC to close
new music music interviews Interviews interview music video
See all results