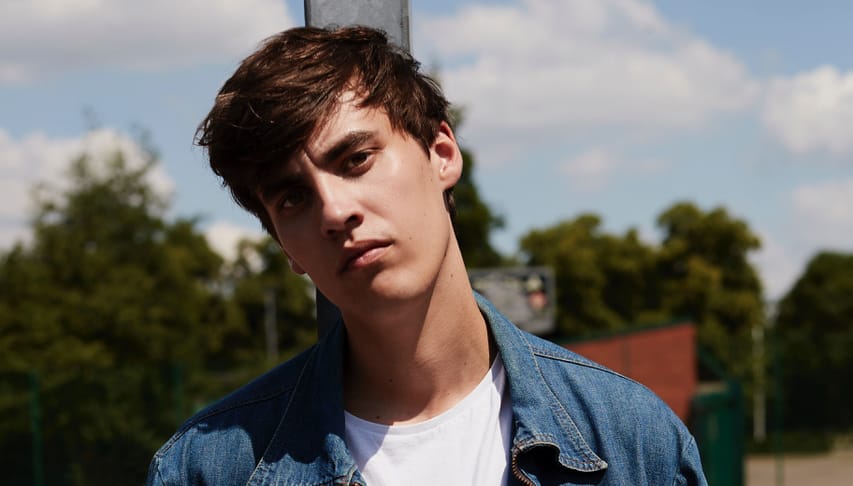 Without even releasing an EP yet, JC Stewart has already been tipped by some of the biggest names in music, including the likes of Lewis Capaldi & Niall Horan. Frankly, it’s easy to understand why. His discography thus far has evidenced his incredible ability to distil his experiences into profound, yet completely accessible, pop music. With an instantly affecting voice and an unmistakable knack for crafting craftily infectious melodies, it’s overwhelmingly evident that JC Stewart is destined for big things.

We caught up with JC Stewart just before he took to the stage at Shepherd’s Bush Empire to support the incredible Maisie Peters. He spoke to us about his songwriting process, co-writing with Lewis Capaldi, his new single “The Wrong Ones” & more!

You recently released your brand-new track “Pick Up The Phone.” What was the creative process like for that track?
Ahh, that’s a funny one, because I was in the studio with two guys, one called Rick and one Michael, and we were just talking about stuff that we were going to write about. Michael is quite an interesting character; he’s from LA and he’s very flamboyant. For some reason, he kept calling me Danny all day, but I love him.

Basically, at the time I got this call from a girl and I was like “I can’t answer that, that’s a terrible idea.” Then we ended up just talking about it, and that’s what the song is about. Like when you get a call and you’re like I really shouldn’t answer that, but, for some reason, you’re always intrigued enough to be like wondering why they’re calling. We wrote it in about an hour and that was it done.

We kind of didn’t think too much about it. Then, like two weeks later, I walked into my record label and they were like “we love this song,” and was like “what really?” It was like 6 weeks from writing it to it being put out, which was just like crazy quick.

When you’re crafting a track, do lyrics or music tend to come first?
I’m definitely a melody guy who needs to think about lyrics. So, I was in the studio today actually, and we wrote two melodies but then it was like what are we going to say? Sometimes if I go into with a lyric, it’s fine. But normally, I have to think about lyrics and craft them a lot more than the melodies. With a lot of songs that I send to my label, they’re like it sounds great, but the lyrics are terrible. So I’d say when it’s a good lyric that’s usually the songs that usually come out.

I’ve spoken to Lewis and Phil about it, but my favorite song off Lewis’ album is “Hollywood.” What was the writing session like for that track? How did you know it was picked?
That’s a funny one. Basically, Lewis calls me and I’m on the train back from working with these guys called Nick and Ed, who produced the whole album randomly in this weird serendipitous coincidence. Lewis is just like “what are you up to?” and I’m just like “I’m on my way home man, I’m knackered.” He’s like never tired, so I’m like are we going for drinks or something. Then he’s like “I’m not drinking at the minute” and I’m like “you what?”

So he asked if I wanted to go to the studio, and I’m like lemme ring some boys and see what’s happening. I ring Kin, and he rings Phil. We get there at like 11 and we wrote to like 4. We wrote the song just kind of mucking about and hanging out. Then I remember his manager absolutely hated it, and I think he still hates it. But anyway, Lewis started playing it live straight away and we were all like “oh my goodness, Lewis Capaldi is singing ‘Hollywood,’ this is amazing.” Then, yeah, it came out on the album, and now I’ve got a number one trophy that I can open beer bottles on; it’s great.

You haven’t released an EP yet when you do what do you want that collection of tracks to represent to you and the person listening?
Well actually the first two tracks off of the EP come out on Friday. It came around proper quickly like you always think everything’s ages away. Last week the label like tweeted who’s ready for new JC Stewart music and I’m like “I’m not ready” (laughs).

But yeah, we’re putting that out. It’s kind of what I wanted the end of the relationship tracks to be as I want to want to move on and start exploring some other stuff. The EP is kind of like four songs of different times when I was in this one relationship. I just kind of want to bookmark that chapter and kind of be done with it and move on.

You had your residency at the Islington. How different is supporting at something like this compared to headlining your own shows?
It’s completely different; I love both. I was sound checking a minute ago and playing Shepherd’s Bush is always crazy. But, headline shows are crazy too because people are there to see you. You’re not there to win people over as much which makes on you, but not more relaxed. You’re actually way more stressed. But, once you’re into it it’s class. Like people know the songs, it’s class. Next year is the year of doing headline stuff so I’m so excited.

I absolutely your track “Like I Did,” it’s insane. Why do you think that song has resonated with so many people?
I don’t know. A lot of my friends say the same thing, it’s their favorite song. It’s weird because my favorite song, that I’ve put out so far is “Medicine,” but I think the stuff I’ve got coming out soon are some of my favorite tracks too. People just seem to really resonate with “Like I Did” for some reason. Some people seem to really like old tracks that I did in like 2013 when I was like a baby. They’re like “Gold” is my favorite song, and I’m like I can’t even remember what that song sounds like. But yeah, I love “Like I Did.” It’s not about me, it’s about a really good friend of mine. I open every acoustic set I do with it

Following off of that, do you ever think about the intended audience for a song or when you write is it just for yourself?
Nah, I tried it for a while and it didn’t work. It’s like the more I think just think about what I want to write about, the better the song is going to be. That’s always what connects better too. Like people can definitely tell if you’re not being authentic and true to yourself

What’s the feeling of like midnight when a song comes out?
Obviously everyone puts loads of pressure on New Music Friday and stuff like that. I remember last time we put something out, it was the end of my headline shows and we’d been drinking for a little bit. Then, it got like number three on New Music Friday, and we just lost our shit. Obviously that sort of stuff isn’t the be-all and end-all. With any song, you’re always going to have a few people who love them and few that hate it. Just putting it out and forgetting about it is usually the best thing you can do about it.

Is that easy to do?
Not at all, because for the next three weeks all you’re talking about is that song. “Pick Up Your Phone” came out and did really well, but like “Bones” when came out it didn’t have that much of a response instantly. But it’s doing really well on streaming now so I guess you never know; it’s very interesting to see.

You sort of mentioned it earlier, but how do you decide what songs to release next? Like what is it about a song that makes you feel like it’s the right time to release it?
When I signed to my record label, we had these three songs that we wanted to put out, and none of them are actually out yet. I wrote “Have You Had Enough Wine?” just before Christmas last year so I was like that makes sense, let’s start with that one. Then “Bones” is an old one so I really really really wanted to put it out and the only feasible time to put it out was when it was released. Then with “Pick Up Your Phone,” it sort of was the perfect bridge between “Bones” and my EP.

It seems to have just all fallen into place really well. Then next year we’ve got a rough plan of releasing three new songs, which I think are my best songs, so we’re just going to put them out and see what happens.

I was checking your playlist on Spotify, and there are some absolute bangers on there. Violet Skies is incredible and Naaz is just phenomenal.
Naaz is like one of my favorite artists in the world. I went to see her Cologne with my tour manager. She’s just absolutely insane.

Yeah, she’s incredible. Going off of that, what draws you to a song? Like do you listen to first?
I don’t know. Naaz has got this thing where she’s just completely raw; it’s class. I just love good songs. Like I don’t care if it’s pop, rock, jazz or whatever. If it’s a good song, it’s a good song. One of my other favorite things at the minute, at the other end of the spectrum, is Celeste. Her song “Strange” sounds like it’s from 1945. But yeah, if you listen to New Music Friday a lot of songs sound the same, but then if there’s one track that doing something different it’s instantly intriguing.

You’ve got the Scala gig sort soon. I hardly ever went to that venue; twice next week alone. What can people expect from that?
Strippers. Confetti. Champagne popping on stage. Nah, the band show is a whole different thing. We have a lot of fun. We’re just going to be turning it up to 11, and just seeing what happens. Yeah, we pretty much just go way over the top, and if people complain then we can apologize afterward.

It’s just trying to make the whole thing something I’d want to see as a fan, you know? When I was watching singer-songwriters growing up, I always was like loving the songs but I’d kind of get a bit bored sometimes. I just want to make sure that doesn’t happen, so I’m just going to go a bit ridiculous on stage.

Finally, “The Wrong Ones” is amazing; I absolutely love the track’s lyrical sentiment. How did you first land upon the integral phrase “the wrong ones”?
I wrote this in a living room in Manchester with a couple of friends of mine after discussing our disastrous dating lives this year. It’s a song that says what it says and is pretty autobiographical. Maybe someday I’ll learn to make better life choices. Today is not that day.