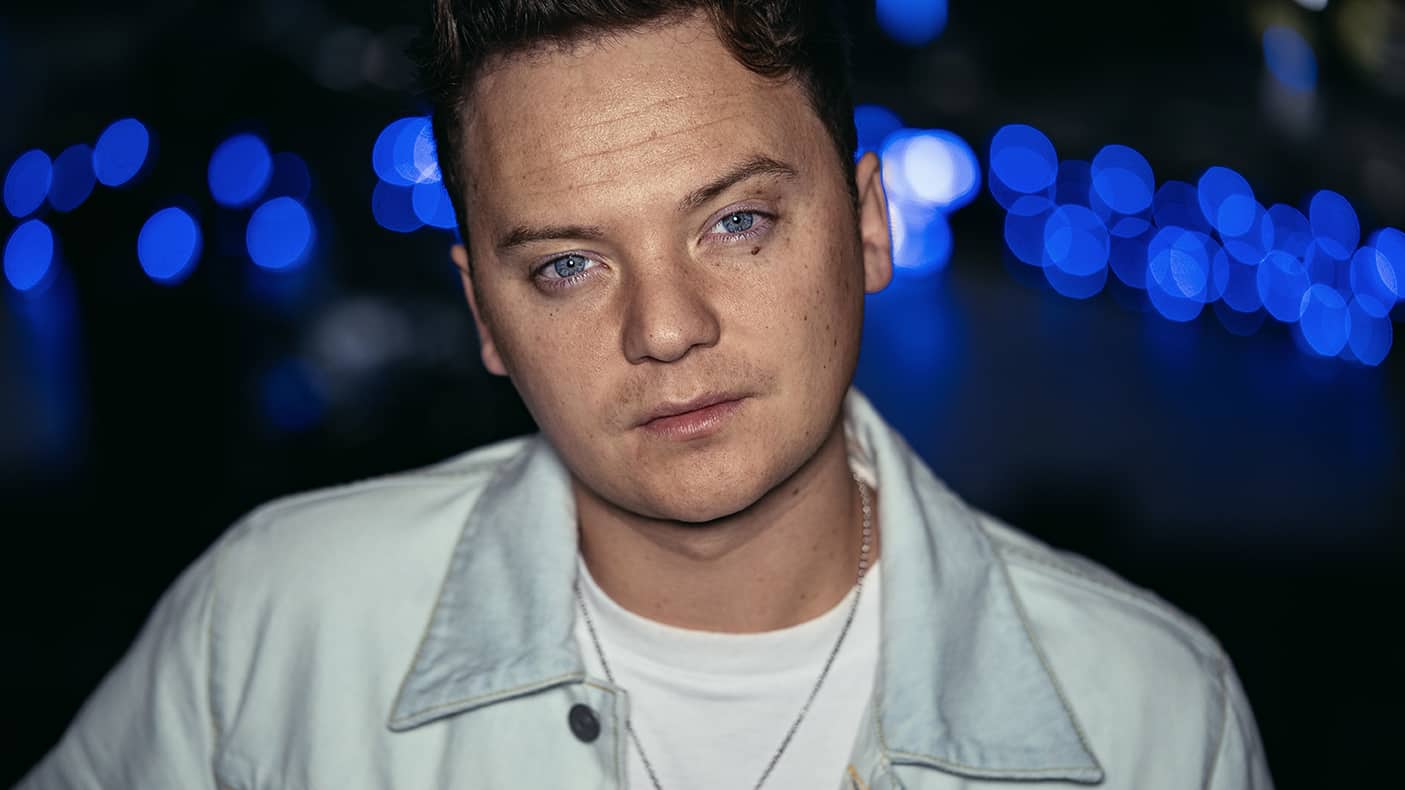 Old media might scoff at YouTube as a serious platform for musicians, but when an artist is approaching two billion views (that’s billion with a “B”) and touring the globe, it’s pretty much undeniable. 27-year-old, Hove-born Conor Maynard has managed to go from teen pop YouTube icon, to international recording artist, to self-propelled new media titan all before thirty; it’s enough to give you a complex.

He’s worked with the likes of Rita Ora, Ne-Yo, and Wiley, and it appears he’s only just getting going. But Conor is an important artist of our time in a way that transcends the genre of music he plays; he is the epitome of the industry’s push-and-pull transition from the old to the new. While he started by uploading his covers to YouTube, he signed to a label and lived the traditional dream. Now he’s back on YouTube and Spotify of his own accord, in control, and stronger than ever. The linear path to musical stardom has become fragmented, and as Conor will tell you, that’s a good thing.

More and more we are seeing artists who are truly independent and where once that might have been a synonym for “unsigned,” now it’s a badge of honor, and importantly, no indication of success. With well over ten million followers across all platforms, billions of listens and views, and one of the most fervent fanbases I’ve ever witnessed, Conor represents a powerful change that rewards talent and industriousness over nepotism and the whims of the important. As if that wasn’t sufficient, he’s a bloody nice guy too.

YouTube has undoubtedly changed the music industry. You’ve got experience both sides of that coin. What are your thoughts on it?
When I first started uploading videos on YouTube, it was a hobby and you couldn’t even make money. I originally put videos on Facebook and only my friends could see them. Then I wondered what people who don’t know me would say, then I picked up traction and labels got involved. But even the differences in YouTube and the music industry between then and now is crazy – back then there weren’t many rules, now you can’t use an official instrumental because it will be automatically flagged. The positive of that is you have to be more creative.

Exactly. Previously if you wanted a successful career in music, you only had one route: labels. Now you have another path, don’t you?
You see so many more independent artists, although you never know what’s going on behind the scenes. I think some claim [to be independent] because it looks cool, but it has definitely changed the way in which people can make it.

And you’ve come full circle now– You started on YouTube, went to a label, and now you’re back to primarily using YouTube again.
Yeah, YouTube is my number one platform. I’m at nearly 10 million subscribers and that’s my biggest asset. As you say, it is full circle. I started on YouTube, then I got signed to a label and I stopped utilizing the platform the way I did in the beginning. Then after my first album, while I was working on my second, I realized that I wasn’t really putting out any content and I needed to do something to keep the fans engaged. There’s always more artists and the internet has made a lot of fast content. So I went back to doing covers and remixes while I was working on my album, but it had changed. I was getting a lot more views and where my views used to be mainly from the UK, now they’re mainly from the US.

It’s funny, even 15-20 years ago, breaking into the US for a UK artist was an incredibly big and difficult task and now it can happen almost by accident.
The US is my biggest market now. Because of things like Spotify, too, there’s now just the global chart which is mainly influenced by America. It makes it really interesting. As you said, when you release a song now, you’re releasing it to the world, you want it to do well everywhere. You still have artists that are mainly big in their own country, but that’s still down to traditional media like radio.

I might be wrong here, but it seems to me that those traditional forms of media push back a little against the newer ones. The older generations used to say you can’t make money on the internet, then you can’t make money on YouTube and now there are people unfathomably rich from both. Have you experienced any resistance because of your presence on YouTube?
I probably have without it being to my face. I had songs that went to radio that then wasn’t played and they gave weird reasons, and it could be that. They want to maintain their influence as young people rely more and more on the internet as their number one source of everything from news to music. Change is inevitable though. I’ve never been told to my face that because I’m a big YouTuber I can’t do something, but it probably has happened.

I always feel that people become more skeptical when they hear someone is a YouTuber. But I bet you’re pulling more listens from YouTube than traditional media.
100%. I think I’m at nearly 2 billion views on my channel, which is insane.

I saw a comment on your Drake cover that said your video has more views than the original song!
Yeah which was insane. It’s funny that they say about YouTubers. I cringe a bit when people say I’m a “YouTuber”; I’m a musician that utilizes YouTube in the same way I use Instagram, why don’t you call me an Instagrammer? People just don’t know, I guess. Ed Sheeran’s videos are on YouTube. I don’t get offended though, they’re just ill-informed.

It downplays how much work goes into the greater picture too.
Yeah and I’d say it’s 50/50 with people who call me a YouTuber and people who call me a singer. But I remember when I was doing my first album I was a singer every time. As soon as YouTube became my biggest platform, I was a YouTuber. I think what influenced it as well was that I’d do silly videos with my friends and my brother, who is a YouTuber — he makes funny content just for YouTube — and I did it for fun at the same time.

One area I’m often interested in with fans is fame in modern society. I don’t think I could handle it with all the social media and constant attention. Everyone sees the billions of views and the tours, but what’s the biggest adjustment for you as you’ve grown in profile? What’s been hard?
Well, for me, I never want to moan about it. I see Justin Bieber online being followed by 20 paparazzi; I don’t experience anything like that. I’ve seen levels of fame and I think “wow, I’ve never been through that level of fame.” Even when my brother went through his whole ordeal, he had people waiting outside his flat! For me, it’s more situations like going to the shop to get toilet paper. I don’t really want to be recognized then! In the UK, I usually don’t go a day without someone stopping me and asking for a picture. I never turn anyone away. You don’t know how nervous they are. They might love you and telling them to go away would really upset them and I’d never want to do that. So I try to always be friendly.

But that must be hard to maintain, no?
Yeah, 100%. If I go to Westfield on a Saturday it would be a nightmare, so I have to pick and choose when I go out.

Your fans certainly are devoted! I got here this morning and there are two long lines of your fans, 9 hours before your show even opens doors, sitting in the rain to wait for it to start.
This morning I saw how bad the weather was and I thought that would mean the fans would arrive when the show starts. But I got here super early and fans were already congregating outside. I hope they all brought coats!

Your fans’ passion is interesting. Not all artists get that level of dedication. Why do you think you do? Is it age? Is it social media?
It could be social media; they feel they know me better, but I’m not sure. I don’t know why they are standing in the rain for me, honestly. It may be an age thing. On my first tour, I was 19 and a lot of my fans were around 13-14. I would come out of the gig after and all the fans would be there screaming and wanting a picture. Now there’s a lot fewer [after the shows] because the fans are older. I did a headline show recently in Stockholm and the average age of the crowd was older than me.

I think the perception has changed because I was originally marketed as a pop teen type thing and now I control it more myself. In Stockholm, there were lots of couples in their late-twenties, early thirties. When I come back to the UK though, the fanbase is younger. In Europe, I wasn’t really pushed as the teen pop kid whereas now everything is more international. But the most passionate fans, the ones that are probably sitting outside now, are the younger ones.

I’m a big grime fan and you did a song with Wiley. Are you into grime much?
I am, but I moved to L.A 2 years ago and I don’t feel I can keep up with it as much as I’d like to. Stormzy is sick though. Everything he puts out is amazing and his videos are incredible. I think he’s really paving the way for a lot of people.

The “Vossi Bop” video was incredible. Speaking of which, I want to discuss your latest video “Waste Your Time.” The video to that is striking, to say the least. It was almost like a short film. Who was it directed by?
I directed it– I cast all the actors, I held castings and wrote a script for them to read. I would take the two most extreme emotions I wanted to see from them and put it in a scene. Then we found the right people and did two 12 hour days to shoot it. I wanted it to be striking because I’d love to direct movies one day. We’re in an era of lots of superhero movies doing so well that I wanted to do an anti-superhero type guy that is essentially a hero but in a weird way. It was inspired by a scene from The Nice Guys where a man is paid to beat stalkers up and so on. I loved that idea.

It was darker than I expected.
Yeah, the song is so pop and clean cut which I love, but I wanted a video that was a complete juxtaposition. I really enjoyed putting it together. Though it was so stressful on the day!

Ok, three cookie-cutter questions to finish off. Number one: Who is your dream collaboration?
Right now? Billie Eilish. She is smashing it and her voice is amazing. I’d love to do a slow piano ballad with her.

That would go very viral. Her voice is incredible isn’t it? I don’t feel everyone knows that.
Yeah people don’t even realize because of her vibe and she’s so well known, but when you hear just her and a piano she’s insane.

Best song of 2019?
Hollywood Bleeding by Post Malone, I love that song.

Number three: let’s do some promo. What work of yours should we keep an eye out for?
I’ve got a feature that comes out in November called “Talk to Me” with Sam Feldt. It should be really cool.