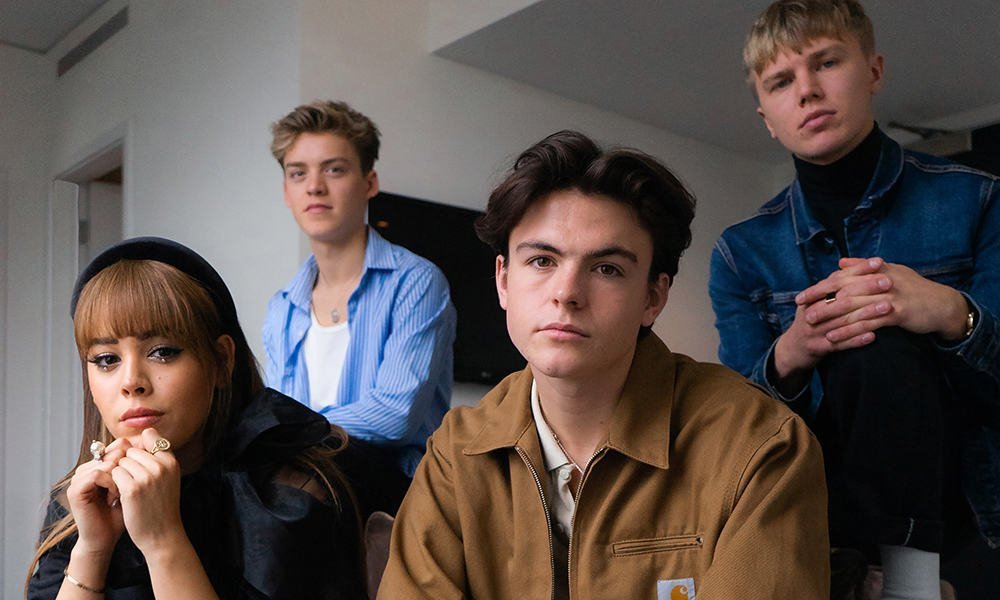 Since we’ve last heard from the New Hope Club boys, they were touring around the UK and Europe on The Vamps’ “Four Corners Tour.” Since this April, New Hope Club has become a sort of hot commodity. As their “Love Again UK Tour,” has sold out numerous rooms across the UK and their Welcome to the Club EP reached #1 in ten different countries; including the UK, and Germany.

Ahead of their sold-out show at O2 Shepherd’s Bush, I had the opportunity to sit down with the boys in New Hope Club. Where we discussed their latest single “Know Me Too Well;” featuring Mexican singer, actress, and model Danna Paola (Netflix’s Élite) and their upcoming album due out February 2020 via Virgin EMI Records.

“Know Me Too Well” is an aptly timed release; as Paola’s sultry vocals bring a specific heat to the track. One which compliments the track and builds upon Blake, George, and Reese’s arresting vocals to create a powerful dialogue. Between New Hope Club’s lyrics and Danna Paola’s stunning performance on “Know Me Too Well,” readers will be able to find one hell of a catchy chorus. Which is a given, as the boys in New Hope Club are champions of catchy choruses, much like their earlier release “Permission.” Unlike their former release though, “Know Me Too Well” sees New Hope Club becoming bolder and experimenting with musical styles as they truly come into their own.

“Know Me Too Well,” proves that New Hope Club are growing forces to be reckoned with, in modern pop music. Granted, fans of New Hope Club already know that; as New Hope Club’s 2020 debut album has seen a deluge of pre-orders. Unlike their upcoming release, you don’t need any “permission” to stream their latest single “Know Me Too Well;” as the song was released to all major platforms on the 4th of October.

For fans who do not live within the UK, there’s no need to fret though. As New Hope Club will be returning to select countries such as Singapore, Indonesia, South Korea, and Japan on their tour. Tickets for New Hope Club’s “Love Again” and “Love Again Encore Tour” can be purchased on New Hope Club’s website, but don’t wait for too long; as tickets are sure to sell out in no time.

If you’ve already got your tickets for the “Love Again UK Tour”  then buckle up and get ready to hear about the wild process which went into recording “Know Me Too Well.”

I’m sure fans are going to wonder, but, what’s the history behind this track? How did both of your camps get in touch with each other?
Danna: Well we are brothers actually from another mother.
George: We wrote the song in London and the song had a very Spanish/Latin vibe and we wanted someone cool, someone, who spoke Spanish. And we saw Danna and we sent the song to her team. And once we heard her on the song, we instantly loved it. It sounded so much better and basically, we emailed and met up in Valencia.
Danna: It was really fast actually.
George: Yeah, everything moved so quickly. As soon as we got the song back from Danna, we were like let’s get the song out as soon as we can.
Danna: I heard the song on the first day and that same day it was like, “Alright perfect. The video’s going to be shot in Valencia” and you have to sing and figure out your part. So, I preferred to do something in Spanish of course. Because it’s cool having both languages in a song. It works really well, I translated, not literally but it’s in the same sentiment of the song. I think it’s really a catchy dancing song.

Was there any specific moment in that time where you all decided that “We have to record a song together?”
George: When we first saw and heard Danna, definitely.

During the recording process were there any hidden difficulties?
Blake: Eh well. We had a bit of a difficult time recording.
Danna: What are you even doing in the Spanish?
Reece: The day that we recorded it was the day after The Brits. So, we went to the Brits and the went to an after-party and got very, very, very drunk. The morning afterward, the day we were recording the song. These two [in reference to Blake and George] were taking turns going to the bathroom being sick. It was awful.
George: It was not our finest. It was the worst day I’ve ever had in the studio.
Reece: Blake was meant to sing the whole of his part but couldn’t sing the last verse. Which is why it switches to me. I sing his last line, which sounds good now but at the time it was meant to be George.
Danna: When I recorded my part, I was sick. I’ve been sick for three weeks.
Reece: Sick song isn’t it?

On the flip side, what was everyone’s favorite part of the recording process?
Blake: Well, we’ve never done a song that’s quite like this. Like Latin sounding. We’ve never had a song like that but to be able to have a song like this and to have Danna on it is the best!

Would I be correct in saying that you wanted to record a Latin-style track?
Everyone: Yeah of course. One hundred percent.
Reece: We didn’t set out when we wrote, the song to make it Latin. But as soon as we wrote the song, the guitar has this very Spanish feel. In hearing the chords, it just felt right to take it there. We started with the guitar and it felt Spanish, so we started writing the song with Spanish melodies. It’s not a fully Latin vibe but it has a hint and with Danna on it she really made it pop and give it that sexy feel.
Danna: It’s a pop track and right now music has a lot of mixes and rhythms together. And that’s why I like singing in Spanish and English in a song. It’s the best thing that can happen in a song! Also, when I write my songs, I try to put a little bit of Spanglish in; because I like Spanglish, I talk in Spanglish, and the fans love it.

Danna, what was it like working with the New Hope Club boys?
Danna: It was really cool.
Blake: Terrible.
Danna: Oh, don’t tell the truth!
[Everyone laughs] Danna: Actually, it was really, really cool. We met that day in Valencia, and it was raining. It was really raining a lot.
Reece: Yeah. Well, we expected to go to Valencia and have the beaches and the sun, but it was raining. But it kind of works with the song because it’s got this bit of a sad edge to it. So, it worked well.
Danna: It gives the video a really cool feel.

If you could connect any emotion to this song which would you choose and why?
Danna: I actually think the vibe of the song, and the lyrics are really cool. Because It’s a situation that happens to all of us. Y’know? That when you break up with someone, you’ll always remember that person and that person will always know you like anyone. It’s a really good song and a really good topic for a song.

Now, for you guys, I know you’re gearing up to release a new album coming February 2020. I was wondering, is this song is reminiscent of other tracks on the album?
Blake: Actually, no. It’s not really like the album. As in, we’re writing on it but it’s probably the only Spanish/Latin sounding song on the album. Which is nice. First, obviously not being from Spain or Mexico, anywhere like that. We wouldn’t want to have an album full of those kinds of songs but to be able to explore that was nice.
Reece: It really adds to the album and gives the album another dimension and dynamic. And like it’s really cool to have a song like that sticks out.

Lastly, time for a rapid-fire question. Don’t think too hard about it, but off the top of your head, what’s one word you all would use to describe this new track?
Reece: Sexy.
George: Lovely.
Blake: Boppy.
Danna: Intense.