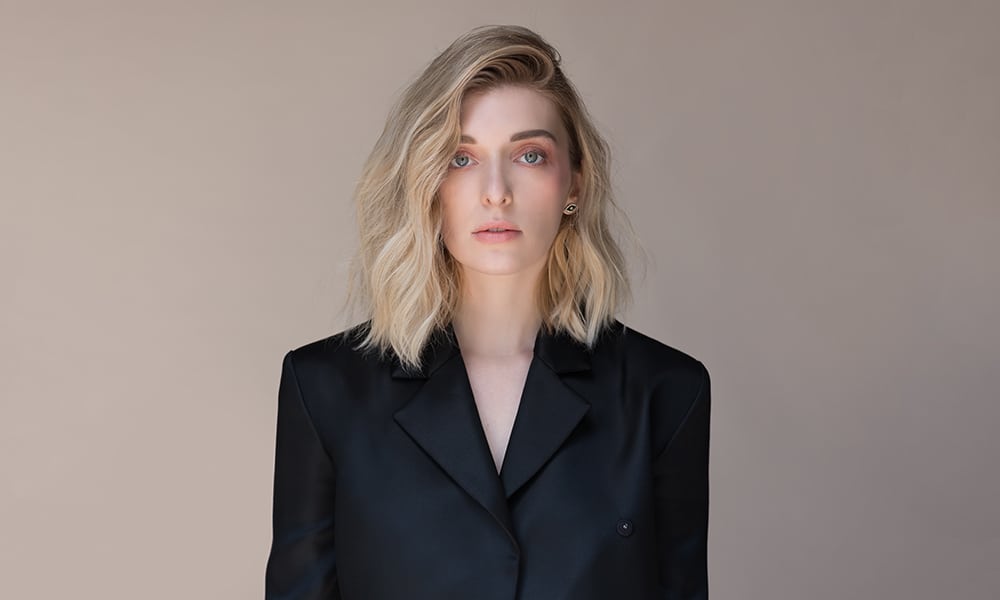 New York-based artist Vérité might not have a major label deal, but the 29-year-old singer-songwriter proves you don’t need one to make it. With over 250 million streams in total and 1.1 million monthly listeners, it’s clear that her music is globally appreciated by her own fostered fan following. We spoke to Vérité on the precipice of the release of the second album New Skin, arriving October 25th, and her accompanying tour.

What would you say is the common theme of your sophomore album?
I’d say that it’s about existing in the middle of something – be it a relationship, or something else that you’ve committed to. It’s about being at that place where you can’t see the light at the beginning of the tunnel anymore, but you also can’t see the light at the end of the tunnel. You know, this is actually the place where most of us are in life, most of the time. Yet we naturally gravitate towards glorifying the beginning, or we revel at the end of things. Instead, it’s about finding peace being wherever you are.

What made you arrive at that concept?
Actually, the concept just kind of came together after I’d been writing new material. I don’t really start writing for an album with a set idea in mind, or a topic or theme that I want to explore. It happened naturally, as the writing progressed – it’s literally art reflecting the experience, I suppose.

Unintentionally or not, it does form a nice bridge when you consider the title of your last album was Somewhere in Between. What would you say characterizes that transition between the two – is there a song in particular that bridges them together?
Not necessarily. I guess this is just the better-looking, older sister if you will. It’s more an extension, an elevation of the previous album. I was still trying to figure out who I was, and what I wanted to create. The goal is always to one-up myself, so that’s what I tried to achieve. If anything, I’m the bridge.

Let’s talk about one of your more recent releases – “ocean.” The lyrics to that song are quite poetic, is that also a recurring theme on your album?
With “ocean,” I tried to keep things abstract. I find that when I write too literal, the lyrics can turn a bit cheesy – too cheesy. It’s nice to see that the meaning of a song can change depending on the context, so it’s good to keep the content open to interpretation. I especially find that when I perform it live, it’s changed into such an emotionally charged song.

How was the writing process in general for you with this new record?
I jumped into writing right after I finished the first record, and this time around I just really took the time to experiment. For a while there I found that whatever I was creating was kind of average in sound. But then I got to Nashville and I wrote “gone,” the second to last song on this record, and that kind of was the catalyst. That’s when I realized where I wanted to take the record, and it all started coming together.

What makes Nashville such an inspiring place for you to write?
It’s strange, but Nashville makes me feel empowered. I actually like writing alone as well, because then I’m free to just go in whatever direction I like. In my experience, as an artist you get boxed in quite quickly, the type of artist or writer you are – you’re cast in a specific role. When I got to Nashville, I was the instrumentalist instead. It was an all-round very collaborative process, and it definitely made me feel more appreciated in terms of the production. That’s something I’ll take with me, that I actually can contribute and produce stuff myself, and do it well – whether that’s in LA or in Nashville.

Is that particularly harder in LA?
Well, it’s anywhere really, it’s endemic to this industry. It’s also part of the radio culture, that’s based around all these formats and genres, so it can be a little difficult. Specifically for women, it’s hard to break through that role you get assigned – be it by a label, or whoever – and get away from that. The beauty of being an independent artist is that I do have full creative control and autonomy, so I can at least try to liberate myself from that. Sure, the goal is to achieve commercial success still, but I also want to be able to stay authentic. I don’t feel like an indie-pop artist, which is what I’m usually seen as. I am just an artist, creating music, hoping that it’ll resonate with people.

Do you feel some type of pressure, though, what with you being heralded as the frontrunner of this new model – era – of successful indie artists?
Not necessarily external pressure. I think it’s mostly me, in that I want to continue to improve and better myself. I don’t like to compare myself to other artists or look at whatever the other millions of people are doing on Instagram right now. What I strive for instead, is just to have that authenticity and get longevity going for my career. Whichever way in which that happens, I try to not get too caught up in what other people are doing. It’d just distract me.

But surely there are other artists out there right now that you’re inspired by, or would love to work with one day?
I’d say that Labrinth has been a huge source of inspiration right now. He’s got such a distinct sound, and he’s just got a great sense of music that I personally love. But mostly, it’s not so much that I want to make similar music or whatever, but I also aim to hone in on my own distinct sound – just like he’s done.

And in terms of career goals? Is there anything, in particular, that’s high up on your list?
Oh, there is still so much I want to do, I try not to get caught up in it all. But yeah, of course, I want to one day play Madison Square Garden and do SNL. But you know, all I can do is work hard and bide my time and hope one day I’m lucky enough to get to do those things.

Now that you’ve started performing it live, is there a song that you would name your early contender for favorite?
I actually would say “ocean” as well, right now. It came together in such a strange way, I’m just really proud of it, and I love that people also respond to it so well – it seems to really resonate. But part of performing live is definitely getting to kind of rediscover your album as you go and keep on re-interpreting the songs you wrote. That makes it really fun. It’s not so much that the meaning itself changes, but you do get to discover new elements to the song that maybe you hadn’t even realized in full before.

What do your plans look like in terms of touring for the rest of the year?
Well, I’m mostly looking forward to my album release show, and then my calendar is pretty much booked until Christmas. I’ll also be touring with X Ambassadors, and then I’ve got some headline shows lined up as well, so that’s great.

You’ve clearly got a lot to look forward to with both the album release and upcoming tour dates, but what are you most proud of looking back on your career so far?
Right now, I’m probably most proud of the last song I put out, I think it makes sense that it’s usually whatever I created last. It’s always going to be the culmination of the journey so far. And since it’s been quite a ride getting it done and actually getting to realize the record from start to finish, right now, I’d probably say my album.