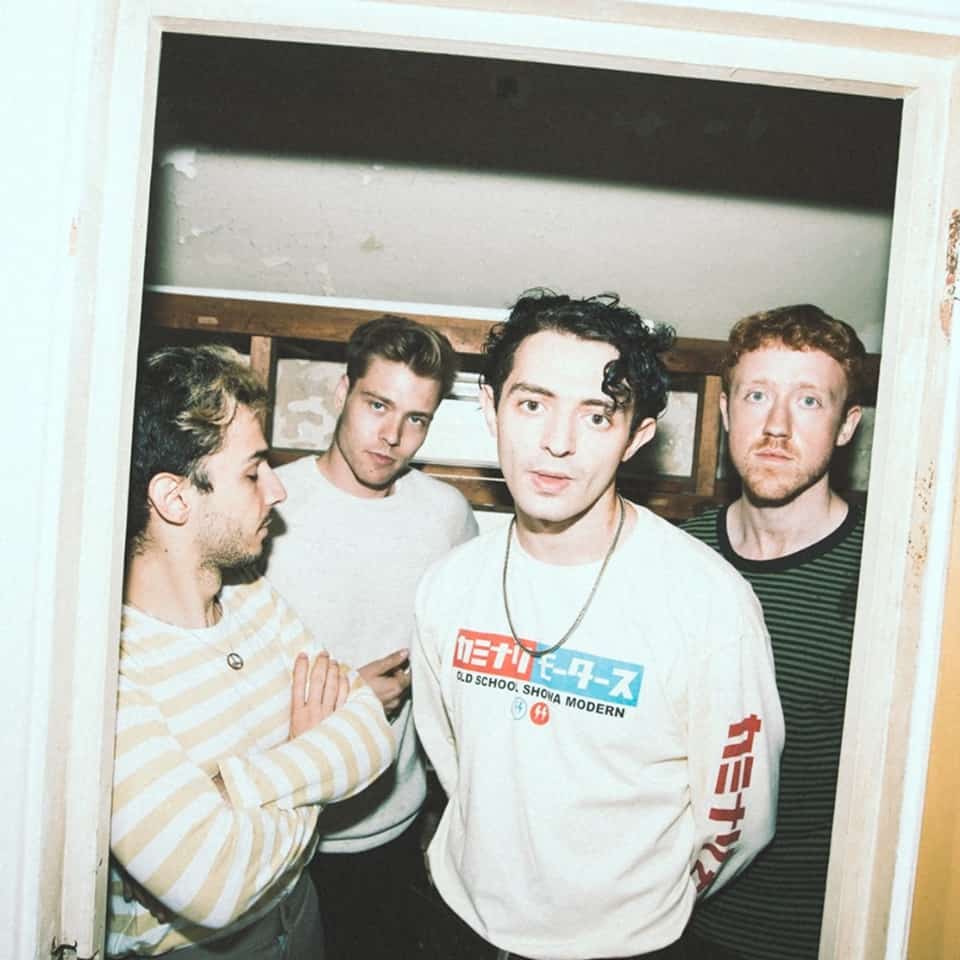 It was there, in a shed-come-rehearsal-studio owned by their pals Bombay Bicycle Club that the band discovered their sound and wrote some of their earliest material.

Whilst Jacob’s vocals are nostalgically reminiscent of The Cure and the band emanate the aesthetic of The 1975, Sad Boys Club’s sound is just the right mix of angst and indie banger.
Following a summer of extensive touring and festivals such as Truck, The Great Escape, Live At Leeds and Neighbourhood, we spoke to Jacob about the band’s creative process and their upcoming EP, due for release December 6th.
A lot of your music is based around inner emotional turmoil. Do you find creating new music cathartic?
Yeah I think that’s a valid observation [laughs]. My inner landscape is just the quarry that’s being mined at the moment, I don’t think it will remain the focus forever, or I’ll ask my therapist for money back. I think it’s a result of us making efforts as a band to create an environment amongst ourselves that encourages vulnerability; we’re four twenty-something men, it’s an important type of conversation to be having, one we hope extends to and includes our audience. In that respect it’s cathartic, there’s also something inherently cathartic to creativity, even the songs that take a little longer to reveal their meaning harbor a certain clarifying energy I think. The good ones anyway.
What part does everyone play in creation?
Our process isn’t completely routine or linear but for this EP in particular, Pedro and I brought a very loose set of ideas to his studio, maybe seven or eight. We spent some time carving away at them until they hung in some kind of skeletal form at which point we showed the others and conversations began as to what was exciting and moving, what was trash or ‘sounds like Del Amitri’ and what the thematic motifs were. They’re not pre-conceived, they just kind of become apparent. Pedro and I finish up the demos and then the other boys enhance the sonic world of those songs as we enter pre-production and the studio. The boundaries of what it is we’re creating kind of make themselves known at that point.
You’re due to release a new EP: Four Shades of the Transitional Phase on 6th December. What was the inspiration behind the title?
It’s a more autobiographical record than anything we’ve created before – there’s always been a lot of metaphors in what we’ve done. It’s been a turbulent year for us all as individuals, even if it’s been the best we’ve shared collectively – we wanted to fool ourselves that we were taking ownership of our lives is a bit of a mess by virtue of ‘authorship’ or something like that. It just sounded cool actually, I saw it on a flyer.
What themes will you be covering on the record?
There’s quite a lot going on in this record, but it centers around the collapse of a relationship, the birth of new ones, the spaces those two things take you into, the importance of the people who become pillars around you in those moments. The absurd extremities you don’t recognize in your own thinking. It’s self-aware I think. Anxieties over whether you’re self-aware or not.
How would you define your sound?
Absolutely rocking.
You’ve played at so many festivals this summer – which one was your favorite? Any you’d love to play in the future?
Truck Festival – it was the first festival Tom and I ever played, I think when we were 13. It was strangely warming to return a decade later. I need to go to Brazil with Pedro at some point, but I’m skint, so maybe Lollapalooza Sao Paulo.