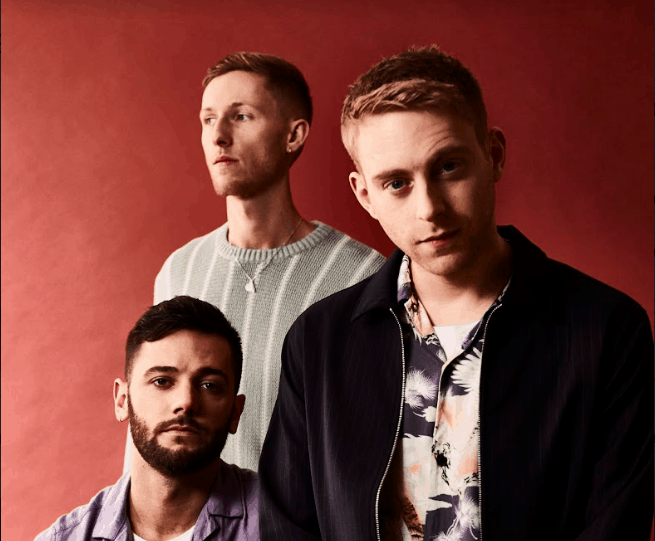 We sat down with Flawes – a trio comprised of JC (vocals, keys), Huss (drums) and Freddie (guitar) – to chat about their latest single, the origin of their name, matching tattoos, and what’s next for them.

Your new single “Ghost Town” has just been released. Tell me a bit about the song’s meaning and what inspired it?

JC: “Ghost Town” is about a relationship that’s fallen into convenience. The love has kinda gone out of it and it represents a ghost town basically. It’s the breakdown of a relationship. Neither of the parties want to leave the relationship and the love’s kinda gone.

Was the song inspired by autobiographical experiences?

JC: It was someone very close to me, actually. It’s not autobiographical.

You teamed up with ROZES on this one. How did the collab come about?

Huss: We’d heard her single on a ‘New Music Friday’ playlist and we knew we wanted a feature on this record. Our label reached out. We loved her stuff and sent her the demo. When she sent it back to us we were all completely blown away. It was the perfect fit, it just kinda made sense.

Freddie: She actually took the song in a different direction from where it originally was. The demo that we sent to her was verse and chorus structure, and the middle eight section was fairly open. She sent it back with her ideas and that really directed where the song ended up going. We loved it.

Where did the name Flawes come from?

JC: We’ve been in bands before; we were session musicians before this. It’s about embracing your imperfections, your flaws, and learning from your mistakes. The ‘e’ within Flawes is a flaw within itself. That’s where Flawes came from. We’ve all got a tattoo! It’s an Ensō Circle.

JC: It doesn’t quite touch. It’s basically saying no one should be perfect because imperfections make you who you are.

Who would you say are your musical inspirations?

Huss: We’re all quite different. Especially the sound of Flawes is something that has come about quite naturally. There’s never been a: we want to make music like this because. We started making music and it’s progressed and changed and changed.

Freddie: When we started, we had clearer influences in the sense that we wanted to be amongst a certain crowd of artists. As time progressed, we started to write whatever felt natural. That kind of took us away from what we said we wanted to be and into something that was a lot more organic and natural, I think.

Looking back, how has 2019 been for you? / Has this year played out the way you thought it would?

JC: Yeah, announcing the album was the biggest thing that we’ve been working towards for the last few years. We’re so happy with the way that’s come out. So that in itself is amazing. It’s been really cool to have some of the songs come out already, [such as] “Don’t Count Me Out” and “When We Were Young” and “Here to Stay” are all gonna be on the album as well. We’ve had a few crazy synchs which was been mental. The L.A. Dodgers have used one of our songs. Every time they go down in a game and then come back to be in a winning position, they play our song. It’s mental.

Huss: Generally, for us, we obviously heard and finished the album last year, and have spent the last four years putting it together. So we’re very very familiar with it. It’s really refreshing to see everyone’s reaction to it as it’s brand new to them. I think that’s always cool. Friends and family that are now hearing the music as it’s being released. It’s nice to get a positive reaction. It’s like them coming to life.

JC: With the live element, we all came from a session musician background. That’s where we’re most comfortable. We’ve got these two shows in Huddersfield and London, then a tour in December supporting AJR across Europe.

Huss: We’ve just come out of a week of rehearsals getting ready for what our show’s gonna be for the rest of the year and it is so fun to play. We haven’t played these songs live yet.

JC: Getting out there on the road, that’s what we’re most looking forward to. It’s gonna be so cool.