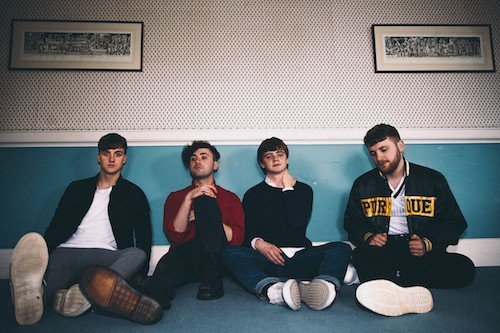 Ireland based alt-rock group The Academic are debuting their new single “The Aftertaste,” which provides a glimpse into their sophomore LP due out in early 2020. Their music is anthemic-driven and has been a critic favorite with Billboard, Clash, VMan, PopMatters, among others. The Academic’s origins are from the small, rural Irish town of Mullingar, an hour west of Dublin. The group is comprised of Craig Fitzgerald, Dean Gavin, and brothers Matthew and Stephen Murtagh, who weave emotional-driven songs with their strong musical tapestry. Listen to “Aftertaste” below:

The group has released their new single “Aftertaste,” which is a fun, 80s-influenced track. Speaking of the track, frontman Craig Fitzgerald says, “When it came to ‘Aftertaste’ it was a lot different to how we worked before. From a production standpoint, we were a lot more involved. Sometimes there is a preconceived notion out there that if you are a guitar band, you should be in a particular lane. Our mindset when writing is less defined by what the stereotype of an indie band should sound like and be more about letting our songs be the best they can be.”

The Academic are surely on the rise with their ever-growing fan-base, including their 2018 debut LP, Tales From The Backseat, landing number 1 on the Irish charts, and have over 580K Spotify listeners, and 40 million Spotify streams. Their longevity is certainly just starting.