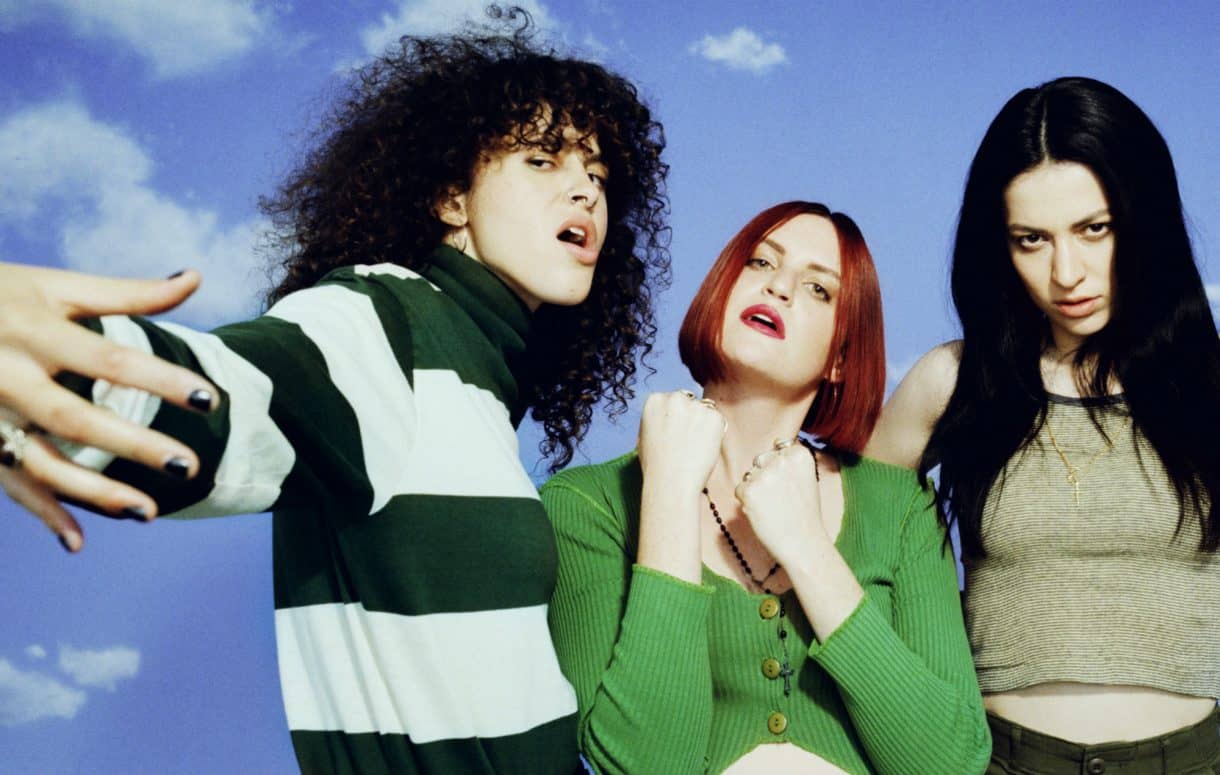 The opening words of MUNA’s sophomore album Saves The World are invigorating: “I want to grow up / I want to put away my childish things / I think that I’m ready to take this song off repeat” lead singer Katie Gavin croons over delicate piano melodies. The soft tenderness is a stark contrast to the aggressively bleak beginning and ending of the emo-pop queen’s previous, and debut, album About U where they mourned lost love.

Saves The World comes over two years after About U, which was crafted by the trio in a bedroom and released in February 2017 following May 2016’s The Loudspeaker EP. The album, a self-described collection of “sad soft pop songs for sissies, angry girls, emo queers, and crybabies,” secured the band critical acclaim, a cult following, and an opening slot for Harry Styles on his world tour in 2017.

Setting the tone for Saves The World is lead single “Number One Fan” (which counts Demi Lovato as a fan), a self-love anthem likening that to which you would feel towards an idol. The high-energy rhythms combined with uplifting and encouraging messages are an apt way to kick off the record, laying the foundations for the album’s theme of self-love and self-recovery. “Good News (Ya-Ya Song)” is a sunny song in the same vein as the band’s forgotten single “In My Way,” and is the brightest they’ve ever sounded.

“Navy Blue” is a deeply personal cut, a journey of self-discovery and recovery over an ocean of melancholic melodies: “I’m just trying to keep my head above water” Gavin sings. About the track, MUNA’s guitarist Josette Maskin explains: “It’s one of the songs on the record that all of us did our best with and it all came together kind of naturally. This record was a very difficult process, but sometimes you just have a ripe peach ready for the picking, and I think that was one of the songs that was just laid out before us and we took it.”

Epic synth-ballad “Never” hears Gavin swearing off love and one’s passion (in this instance, music) for good: “I’ll never love again / I’ll never sing again.” The agony of watching an old flame move on detailed in “Who,” a grey power-ballad which sounds like it could be related to Avril Lavigne’s “I’m With You,” makes it obvious just why Gavin never wants to love again. Then across country-esque guitar whirls and a gentle, hammering synth beat, “Taken” further backs up the ‘giving up on love’ narrative of “Never” through its tale of a hopeless love affair with somebody unavailable to you: “I know you said you had a girlfriend / I just thought that if I could take you from her / Maybe that it would prove that I’m worth something.” In the current political and social climate, it feels more important than ever to hear a queer band proudly use same-sex pronouns to identify a lover, and this level of authenticity is a large contributing factor to what helps make the band so relatable to their rapidly increasing fanbase.

“Stayaway,” “Pink Light” and “Hands Off” are the album’s huge emo-pop bangers; mixing sharp, jagged synths with crashing snares, exhilarating guitar wails and Gavin’s cathartic cries of anguish, it’s a sound which MUNA has become synonymous with. Screaming along to the emotional outpouring of feeling abandoned in the chorus to “Pink Light” (“Maybe if you’d stay for an hour or two / When the sun came up, when I last saw you / Maybe if you’d see the soft pink light / I wouldn’t be alone tonight”) is for sure an album highlight, as is the theatrical, blockbuster bridge in “Stayaway,” both of which are classic MUNA moments.

The story of “Stayaway” – “No-one ever told me leaving was the easy part / I gotta stay away” – feels like it is followed up with the assertive declarations in “Hands Off” of not succumbing to the demands of an old lover: “no you can’t touch, get your hands off of me.” The link is yet another example of Gavin’s natural talent as a storyteller and the band’s undeniable ability to tap into human connections to tell stories with music.

This is even more evident in closing track and album highlight “It’s Gonna Be Okay, Baby” a musical odyssey of autobiographical confessions and revelations. Gavin’s acapella affirmation that “it’s gonna be okay” is a comforting album closer, coming full circle from Save The World’s opening. “It’s Gonna Be Okay, Baby” is a special musical moment, one which band member Naomi McPherson rightfully called a “phenomenal feat of songwriting.”

“Memento” again exemplifies this, where Gavin likens a scar from a bee sting on the way home from seeing an old flame as a reminder of the relationship. “Something about the way I had to pull it out / Never healed quite right and now I’ve got a scar / I’m glad it left a mark,” Gavin murmurs over a thumping beat and dark bassline. The metaphor is unusual, yet brilliant – it’s signature MUNA.

Now rather ironically, Gavin professed on About U’s track “Everything” that “the world could be burning / And all I’d be thinking is / ‘How are you doing, baby?’” Well, the world really is burning now, but if Saves The World is anything to go by, MUNA doesn’t seem to be thinking that way at all; with tracks like “Number One Fan” and “Navy Blue,” the question this time is instead “how am I doing, baby?” Saves The World is an evolution of what made MUNA’s debut album ‘so special’; that same emotional aggression is channeled in Saves The World, but it feels even more introspective and personal this time around.