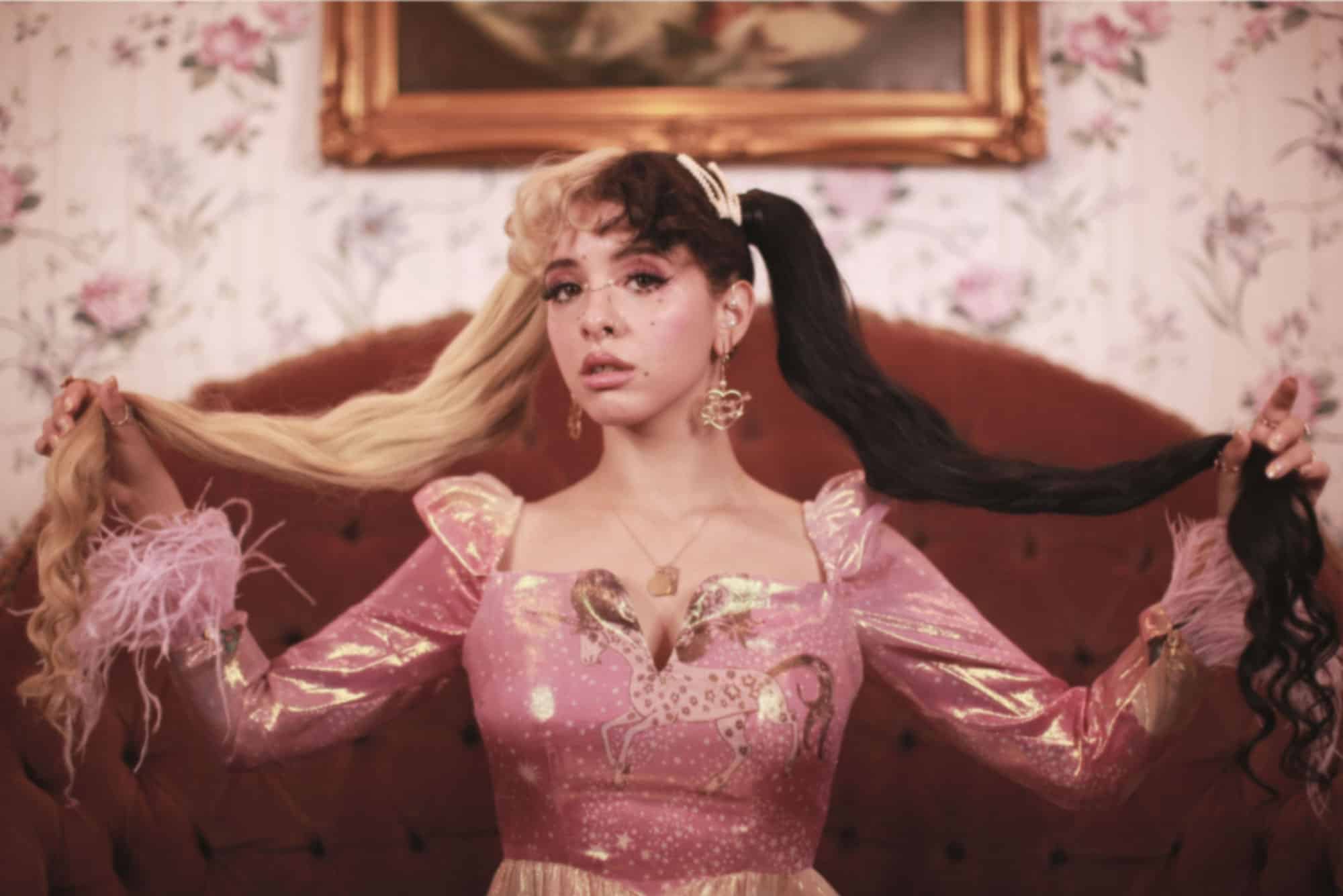 Breaking the mold of a vocal artist, Melanie Martinez mashes her latest album, K-12, with a full-fledged musical movie, connecting each track to an overlying storyline while maintaining the expected high-quality sonic production and brilliant visuals. Opposed to following the music industry formula, by releasing singles before the album in the hopes of gathering anticipated fans, Martinez was able to release the complete album all at once as she reached over 3.9 million views on her movie release in less than 24 hours.

Following the world she had built in her debut album, Cry Baby, which was released four years ago, fans get to reunite with the character Cry Baby as she goes to a sleep-away school for the first time. We easily drive into the album as we see Cry Baby being bullied on her ride to her first day of school, which kicks the first track, “Wheels on the Bus,” into full speed. The track samples the classic nursery rhyme, but then adds a modern-day twist with its electronic production as it eases into a rocky lyrical story with a banging production.

When the bus finally makes it to the school, Cry Baby and her best friend, Angelita,  finds her way to their first classroom. While the pair had already caught their peers’ eyes for coming into class late, the attention really is set on Cry Baby when the cute boy in her class wants to borrow a writing implement; which really seems to phase Cry Baby’s archnemesis, Kelly. This situation sparks the “Class Fight” to start. It’s the perfect song that takes us to the playground, where the two go to a head to head battle. Even though Martinez’s sound captures the childlike aesthetic that she uses, the lyrics in this one still remain aggressive besides the production’s groovy instrumental.

“Class Fight” ends with Cry Baby and Kelly getting sent to the principal’s office for their dispute on the playground. We are shortly introduced to the song, and the character, “The Principal.” The lyrics and the visuals are evidence of the politics that are held within this song. “The Principal” seems to parallel the unfair and the unjust sides to modern American government; more specifically the president.

We then cut to the next scene, where Cry Baby enters into a class late. During this particular class, the teacher is hosting a show & tell puppet show, where Martinez is portraying the puppet. The classroom roars and claps in a primal manner as the puppet show intensifies. This particular song, “Show & Tell,” provides listeners in on Martinez’s personal experience with fame and fans. Lines such as: “Harsh words if you don’t get a pic with me,” as well as, “buy and sell / like I’m a product to society,” express Martinez’s frustrations with the harsh circumstances people put on celebrities. Sonically, the track has somewhat of a lullaby feel as it also incorporates a theatrical pop sound.

At the end of “Show & Tell,” the Cry Baby doll is ravaged apart and must be taken to the Nurse’s Office to get “fixed.” This launches audiences into a choreographed world of purple uniformed nurses and a hypnotic production on the track “Nurse’s Office.” Although Cry Baby, and Angelita who eventually meets up with our protagonist, are locked down and being “treated” for this number, the nurses have no problem keeping our attention with their intricate and funky choreography. Sonically, this track is fun and comes with its own set of sneezes and coughs to implement the setting of the piece.

After escaping the “Nurse’s Office,” Cry Baby finally makes it to her next class: Theater. In this class, everyone is assigned very stereotypical gender roles for the school play, which ends up being Martinez’s song: “Drama Club.” Throughout the number, we see Victorian-styled costumes as Cry Baby and her fellow classmates participate in gender stereotypical activities; for example, the women are ironing and then men just sit back and watch. On top of this banger of a track, Cry Baby initiates a riot where the girls fight back against their gender norms and then informs the entire class that society forces people into stereotypes due to federal power. This leads all of the students to storm into the principal’s office and ultimately kill him.

Flash-forward a few minutes later and we are brought into the next, empowering track “Strawberry Shortcake.” It is a bouncy song that deals with the issues of being objectified by men. Some lines that gather the premise of this bittersweet bubblegum track are: “that’s my bad, no one told them not to grab,” and, “Instead of making me feel bad for the body that I got / Just teach him to keep it in his pants and tell him to stop.” While many of Martinez’s tracks like to mash fantasy with real-world issues, this track is a standout with its impactful message.

We then head to the cafeteria for the cheeky “Lunchbox Friends.” This fun track plays with synthesizers and grooves while portraying the message of wanting to be around authentic friends, not fake people who only want you when it’s convenient. This song follows Cry Baby as the popular girls try to reel her into their inner circle, but Cry Baby remains loyal to her superhuman friends and even enlists one other girl.

As the group of true friends group up together, they notice one of the popular girls also possesses powers that they do. In an effort to try to relate to this outsider, Cry Baby follows the girl to the bathroom and walks into a vulnerable secret: this girl’s eating disorder. “Orange Juice” is another impactful piece of art that Martinez has cultivated in order to point out important issues in modern-day society. “Orange Juice” is a descriptive symbol that is representative of the bile, or “juice,” that comes from bulimia. The overlying message, from Martinez’s point of view, is that there should be “no orange juice.” Martinez reminds her audience that they are beautiful the way that they are and shouldn’t have to be pressured into unhealthy habits to achieve society’s perfect body. The beautiful track is juxtaposed with just as beautiful visuals of Martinez and dancers in a field, saving the girl from being “juiced.”

After starting a food fight, when returning to the cafeteria, Cry Baby is sent to detention. The detention scene shows students locked into desks, tired and looking hopeless. However, when the nurses come around and give the students medicine, the students turn unnaturally joyous. This leads us to our next song: “Detention.” It is the groovy and seductive track of the album. In “Detention,” we see visuals of Melanie and dancers trapped in a glass cage, forced to perform fun choreography as other insanely joyous students cheer and throw bugs from the outside. The main takeaway from this piece is the lyrics: “pretending everything is alright is detention.” And in typical Cry Baby fashion, she manages to escape “Detention” just as the song is ending.

For the next song, we make our way down to science class. Although Cry Baby and Angelita may not be lab partners for this class, Cry Baby can definitely pick up the chemistry going on between Angelita and their science teacher. At first, Cry Baby ignores the signs and even leaves Angelita in the classroom alone after everyone else left. It isn’t later that Cry Baby realizes why Angelita is the “Teacher’s Pet.” This track is one of the slower-tempo ones that this album offers. It describes the peculiar chemistry between someone single (in the film’s case it would be Angelita) and someone married (in this case it would be the teacher). When Cry Baby discovers that Angelita was just being used as a science experiment, she was quick to rescue her friend from the creepy professor.

A dream sequence takes us into “High School Sweethearts.” We see Cry Baby on a bed with the moonlighting behind her as she shows off her vocal abilities at the beginning of this song. What seems like what will be an acoustic track gets groovy as the first verse slips by. The songstress lists all of the rules that she possesses for someone who is looking to be her “…one and only true love.” “High School Sweethearts” is a cheeky song that you can tell Martinez had fun creating. It maintains its dreamy vibe throughout while managing to pop in and out of Martinez’s mischievous playfulness.

Finally, the last track of the album is “Recess.” Later on, towards the end of the film, we are taken to prom where the new, young principal has brainwashed all of the kids to dance until they drop to, what happens to be, “Recess.” Somehow, “Recess” possess a lullaby quality that seems to fit the prom picture that Martinez has implemented in the film. The song is about taking a break from the American stereotype of non-stop working. She stresses that, although people may tell you that you will miss your shot if you take a break, it is important for overall health and happiness. It is touching to hear this being passed on from a hardworking, artistically intellect such as Melanie Martinez.

While the K-12 film is wildly entertaining and visually pleasing, the art and thought behind each deeper meaning is so powerful. For this specific article, we chose to only talk about the music-oriented aspects of the film. However, the film as a whole has so much more to offer and should not be missed.