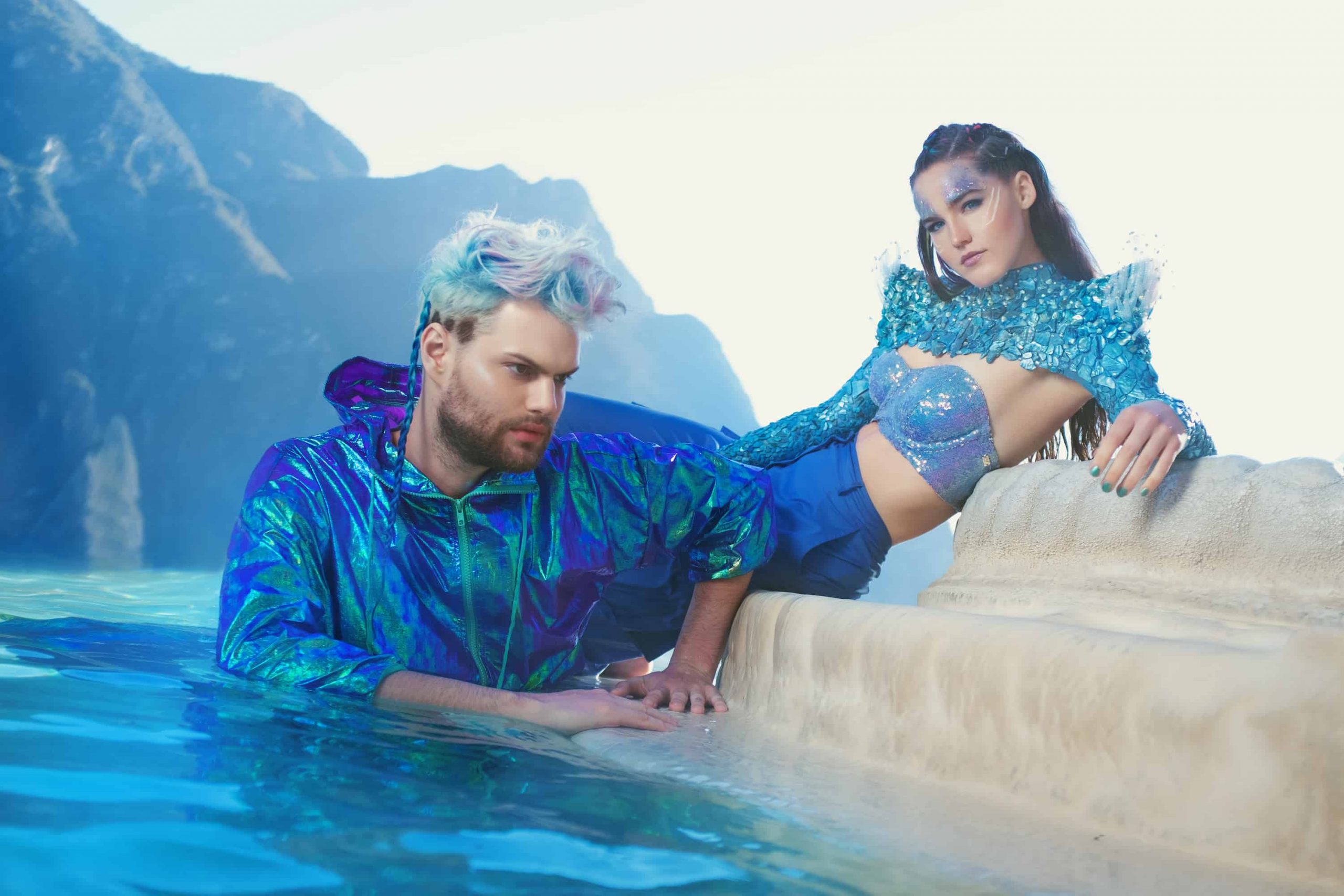 Any act who receives a GRAMMY Award Nomination for their debut single is clearly going to do big things – and, in more ways than one, SOFI TUKKER have.

The American duo, comprised of Sophie Hawley-Weld and Tucker Halpern, have carved out their own larger than life sound since their 2016 debut; usually referred to as “jungle pop,” their sound is one which, in their own words, means that “people never really know where to put us.”

Regardless of this, SOFI TUKKER’s polarizing myriad of genres and languages (they often mix English with Portuguese in their songs) has not hindered their commercial success in any way; their 2018 debut album Treehouse peaked at number five on the Billboard Dance Charts and their 2017 single “Best Friend” is certified Gold. The dynamic duo have also been nominated for two GRAMMY Awards; one in 2017 for their debut single “Drinkee” (which they impressively self-released), and then another nomination in 2019 for their Treehouse album.

Although some listeners may not know SOFI TUKKER by name, they will know them by the distinctive sound which has made the duo a sync favorite; their music has notably been used in Apple commercials for the company’s iPhone 8 RED and iPhone X campaigns. When it comes to TV and film, SOFI TUKKER’s sync credits reads like a Who’s Who of A-list productions: Orange Is The New Black, Ocean’s 8, So You Think You Can Dance, Gotham, Santa Clarita Diet, and Good Girls.

Celebrating the release of their new DANCING ON THE PEOPLE EP and R.I.P. SHAME World Tour, we chat with the twosome about the crazy visuals for their latest hit and fan-favorite “Swing,” how they develop their so-called jungle pop sound, as well as their signature live experiences known as Animal Parties.

Is there a quote you consider to be your life motto?
We named our first EP Soft Animals after a quote from a Mary Oliver poem: “You don’t have to be good. You only have to let the soft animal of your body love what it loves.”

What are your favorite sounds to incorporate into your music?
We love adding raw live elements with electronics. Electric guitar and bongos and jungle noises are staples in our music.

How did you come up with the title DANCING ON THE PEOPLE and what does it symbolize?
The title comes from our song “Purple Hat” – which is the lead single on the EP. It was inspired by our Animal Talk parties, which we have started to throw all around the world. After our first Animal Talk party, we were so amped up by the energy, by the crazy sweaty sold out vibes of the club… people literally dancing on top of people. That lyric felt like the perfect title for the EP because we want this collection of songs to make people feel like they’re in that environment, where they are dancing so carefree that they don’t even know where they end and the next person begins.

What was the biggest difference in terms of writing and recording DANCING ON THE PEOPLE compared to your previous projects?
The biggest difference may actually be our Animal Talk parties. They have been a huge inspiration for us and a chance to try out different music in a more club setting. We get really inspired by the energy at the clubs. We decorate them as jungles, everyone wears animal masks and just goes nuts.

What is your favorite memory of creating the DANCING ON THE PEOPLE EP?
One of our favorite memories was writing “Playa Grande.” It was inspired by one of the best weekends of our lives in the Dominican Republic, where we were just dancing on the beach with some of the greatest people and making new friends. And then it really got brought to the next level when Bomba Estéreo got involved. They’re one of our favorite bands and getting to do a song with them was a dream. We love how much good energy and friendship vibes was put into that song.

Which lyrics from the EP would you say are your favorite – is there a particular line which you think fans will really resonate with?
“Shame; you kill my spirit and you’re useless” or “Purple Hat Cheetah Print.”

The first lyric, we named our tour after, R.I.P. Shame; animals don’t have shame, so why should we? It really is spirit-killing. The second one is simple. But we think people who like our music will like Purple Hats and Cheetah Print as much as we do 🙂

What inspired the decision to split the DANCING ON THE PEOPLE project into different parts and how do the upcoming parts differ from each other?
We just had way too much music we were excited about! We want to be able to tell the story slowly, and release the music so that each song has some time to breathe and be seen! They are all our babies and we love them and want the best for them!!

The visuals for lead single “Swing” are phenomenal! What was the concept behind these visuals?
The song sounds like an epic battle to us, so we kind of just ran with that. It’s very extra. We really battled the elements to shoot the video and we love how it turned out!

You guys have remixed some pretty amazing artists, like MUNA, Clean Bandit & Demi Lovato and of course Billie Eilish. What is your creative process like when it comes to remixing other artist’s music?
The creative process on remixes is different depending on the song, but we usually start by identifying our favorite piece of the track, like vocal or guitar riff or bass line. Then build from that one favorite thing. I personally love making remixes (getting remixes of our songs) because it’s so fun to put a piece of art intended for a certain world, into a totally different space. We usually want to make a song more danceable, which is always a fun task 🙂

You are embarking on the R.I.P. Shame World Tour this fall – what can audiences expect from your stage show?
We just premiered our new live show at Coachella and we are SO excited to bring it around the world. It’s a really enveloping show, we want everyone to feel like they are transported to another universe together: a jungle, colorful, fun, ecstatic, dancing universe.

Your past tours have raised tens of thousands of dollars for Planned Parenthood and the Trevor Project, whereas your next tour will be supporting The National Alliance on Mental Illness (NAMI) and their local affiliates – why is it important to you to support these charities?
This tour is called R.I.P. Shame because we really want to shed light on how important mental health is and how there is really no shame in struggling with it – we all do!

Have you ever felt pressured to fit a certain “mold” as an artist?
It doesn’t get to us but people never really know where to put us — in the dance tent or the live stage; too clubby for alternative radio, too weird for pop radio, too pop for dance radio. But then sometimes it does work and it’s great. Ultimately, we aren’t making music for any radio station or any genre. We make what we love and trust! We kind of dip into a lot of different worlds and we love that.

Was there ever a moment where you felt like giving up on music and doing something else?
No. We are both super passionate and determined to have a long career.

Which aspect of the music industry excites you the most?
We have found so many incredible people in the industry–other artists and beyond. We try to surround ourselves with really positive people who just love music so much.

Have you noticed any double standards when it comes to gender in the music industry?
To be honest, we’ve been really fortunate. We’ve purposefully surrounded ourselves and only work with smart feminists – men and women alike. And because we have built our business and crew that way, we have kind of been shielded from a lot of shitty behavior and double standards.

Is there anything you haven’t pursued yet which you want to?
There is so much music we want to write, so many places we want to tour, people we want to meet… we want to really get better at our respective crafts, and just become the best artists we can be and grow as much as possible!

What are you most looking forward to in 2019?
We have SOOOOO much coming. God, we are excited. We have a lot of music coming out, videos, and a lot of touring. We are excited to be back on the road; it’s really our happy place, getting to dance with communities all around the world!