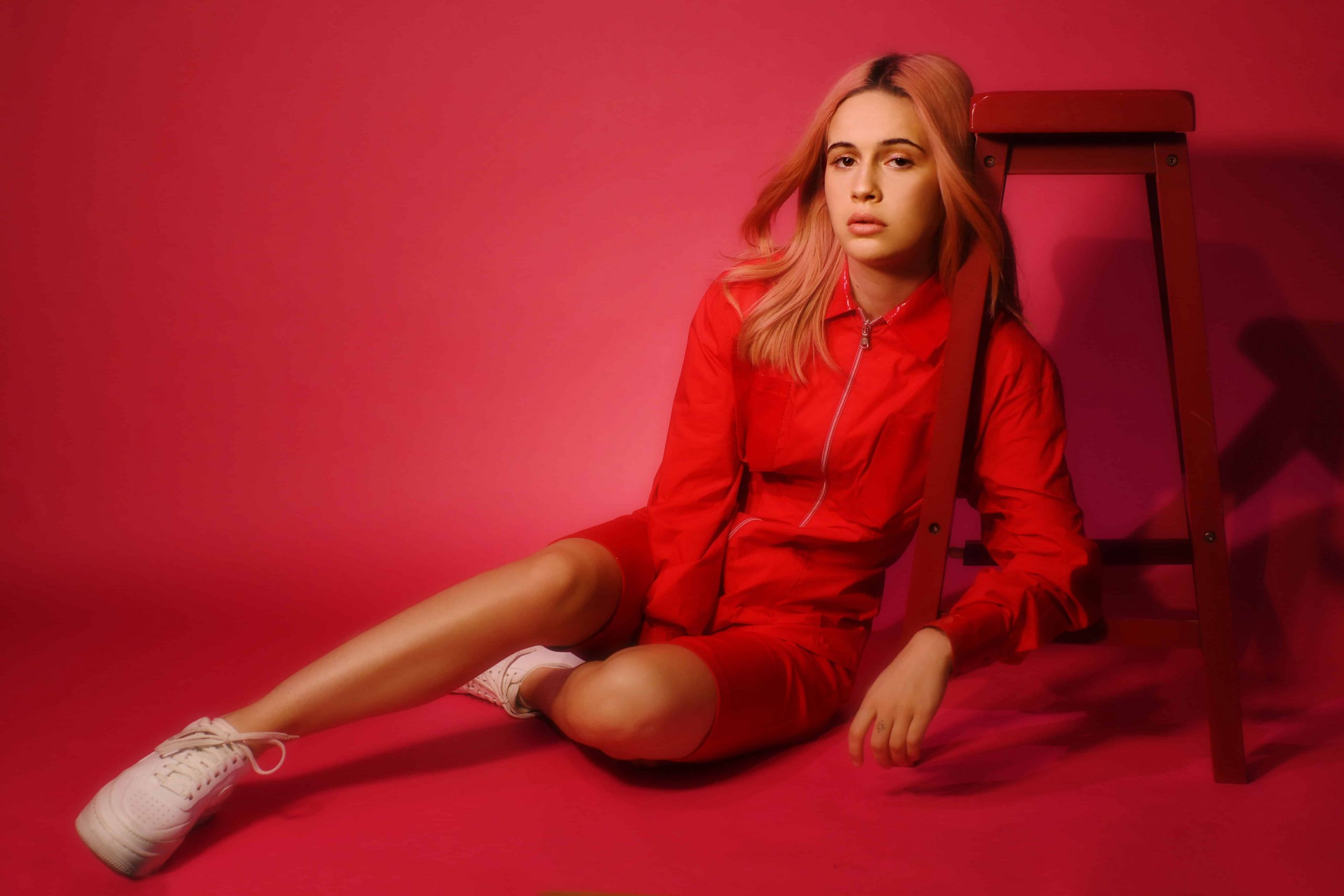 “Sometimes I wish I could have made music in the 70s... Been a rockstar and not had to worry about Twitter or Instagram.”

Bea Miller is the kind of artist we need right now. Having entered the music industry as a teenager, Bea knows the struggles of growing up in the spotlight and has openly spoken about the highs and lows. The maturity-accelerating journey has given her a sense of perspective that’s wise beyond her 20 years, and this is reflected in her relevant, relatable pop records.

Now, the New Jersey native has two albums out and tours with pop powerhouses Demi Lovato and Selena Gomez under her belt. After her sophomore record, Aurora, her singles “it’s not u it’s me” (ft. 6LACK), “Feel Something” and “FEELS LIKE HOME” (ft. Jessie Reyez) have been racking up millions of streams.

EUPH. sat down with Bea Miller for one of the most honest and introspective conversations we’ve ever had with a musician. From the state of the world today to her lifelong dream of being an astronaut, this is Bea laid bare.

You recently released the single “Feel Something.” What was the inspiration behind the song?
Typically, I’m a very emotional person and usually, I feel whatever emotion I’m feeling strongly enough to the point where I can’t force myself to ignore it or detach from it. Whether that’s happiness or sadness or anything in between. Recently, when I wrote this song, I was experiencing a lack of anything at all. I didn’t feel connected to anything. I couldn’t listen to music because [it] didn’t make me feel understood. I just felt really detached and almost like I was floating through life and nothing mattered to me and I didn’t care about anything. I didn’t like it… When I was younger and depressed, even if I was sad, I felt more alive. I wrote the song about wishing to feel something and I really didn’t care what it was.

Did you feel a cathartic release through the act of writing the song?
I wish I could say that I did. I was definitely proud of myself for putting it into words and grateful for the help I had making the song. And for the people who listened to it and were excited about it. I think I was hoping it would. Sometimes you go through phases in life and you just have to wait them out.

The music video is pretty cool. How did you come up with the idea for that?
The director, Pilar [Zeta], is pretty amazing. I remember explaining to her when we were coming up with the concept for the video why I wrote the song and what it meant to me and how I think a lot of people my age are going through something really similar. We feel really detached and numb to the surroundings right now. Also, I’ve always had an infatuation with space. My childhood dream of being an astronaut never really went away. I’m kinda scared for the future because of how many horrible things are going on right now and how rather than facing them, we have to just get used to them and ignore them otherwise we can’t really get on with our lives. I think people would rather be ignorant than be upset but no one ever changed anything by being ignorant of it. I thought it would be cool to make a video about our own version of the future where we all live in this weird bubble on a different planet. We’ve polluted our surroundings so much that we can’t live outside of our bubble and we’ve all lost our emotions because we’ve destroyed everything natural and real.

You came into the spotlight when you were quite young. Now you’re 20, what’s your experience been like growing up in the public eye?
It was hard. I, like everyone, made a lot of stupid decisions when I was younger. Even outside of that, I went through a lot of difficulties growing into myself, but I think that’s really normal. With actors, musicians and other people [growing up in the public eye], I feel like as a society, we forget that they are kids. I hear negative things about kids doing dumb shit and because they’re in the spotlight, they should be more cautious, but I never thought that way when I was younger. I didn’t have that many people watching me, but it used to make it worse for me. Growing up was already hard and when you think that there are people judging you for making mistakes or being careless just because you’re a kid and you have to learn from those mistakes, it’s a little scary.

No one should be able to deny anyone else the experience of being young and making mistakes, whether they’re in the public eye or not.
Right! I also felt a massive responsibility to be an example for people, which made it even harder for me when I did do something I maybe shouldn’t have because I felt like, what if someone who listens to my music does something similar because they’re following my actions? I also think that it made me a stronger person. I feel like I grew up really quickly because I had to.

Social media and the internet is arguably the most powerful force in building and destroying an artist’s career. What’s your relationship with it?
Sometimes I wish I could have made music in the 70s. Been a Rockstar and not had to worry about Twitter or Instagram. Maybe I’m a grandma in this sense but I think that music speaks for itself and you don’t have to know everything about someone, everywhere they’ve been, everything they’re doing, everyone they’re talking to or what outfit they’re wearing in order to want to listen to their music – or at least you shouldn’t. A lot of people now will only listen to someone they think looks cool or says funny things on the internet. It also sucks when I walk into a situation where we should be talking about my music but it’s about how many followers I have and my last Instagram post; why did I say this on Facebook… It’s disheartening as an artist. I would rather focus on the music and the art and the videos. It’s hard for me to recognize that no matter how I feel that’s not gonna change. I also do appreciate social media because I can connect with people that I wouldn’t have been able to connect with before it. I think it’s really cool that I can communicate with all of my fans at the click of a button. It brings us closer. There is a light on the dark side to everything.

What direction are you hoping to take your music in moving forward?
I never know sonically where I want to end up because I feel like I’m constantly evolving and changing. It changes based on what I listen to, what I’m inspired by, and therefore changes what I create. So, I never know, I don’t have a goal of where I want to end up in terms of the way it sounds. I just wanna be honest and I feel the new music coming out is way more honest than I’ve been before. The longer I’ve been doing this for, the more I realize, no matter what, people are not gonna like you…they’re not gonna like your lyrics or your sound. I just think, if that’s the case, I might as well make myself happy because I can’t make everybody else happy. Some people are gonna like what I’m doing and those are the people I’m focusing on anyway. The new music is very self-reflective. It’s very inside my own head and my opinions on the world around me and how it makes me feel and not necessarily about other people specifically.

What would a parallel universe Bea Miller be doing if not music? Apart from being an astronaut…
I’ve actually thought about this. I’m not smart enough to be an astronaut – or tall enough. You have to be 5′ 2″ to go to space and I’m 5′ 1″. I read that and cried for three hours. I was like 13 or 14 and was devastated. If they can send a monkey to space, they can send me, right?

When I was younger, I felt cheated out of a normal life. I think it can be detrimental to your mental health to start working when you should be in school and trying to figure out who you are as a person. I’m happy to be doing what I’m doing, and I love making music and I wouldn’t wanna do anything else. It makes me feel better to think that, realistically, in a parallel universe, I would be living at home, in my aunt’s house in Long Island and be going to community college. I wouldn’t have any money or many friends. I’d probably be a really sad person. Thinking about this, even if it’s emo, reminds me that even if things feel bad sometimes, this is the best alternative. This is the best thing I could be doing personally. At the end of the day, you end up doing what you’re meant to do, and it all works out in the end.

Which fictional character do you most relate to and why?
Have you seen The Truman Show? I would be Truman. I have a tattoo of Truman on the stairs, you know when he chooses to leave his bubble and go out into the real world? I think we all feel like that sometimes; like you’re being Punk’d. It’s really hard to remember that everyone exists in the same way that you do because we’re only ever inside of our own minds. So as much as you’re alone with yourself, everyone else is alone with themselves too. Sometimes I feel like it’s all a show and nothing is real besides me. I think a lot of people feel this way sometimes.