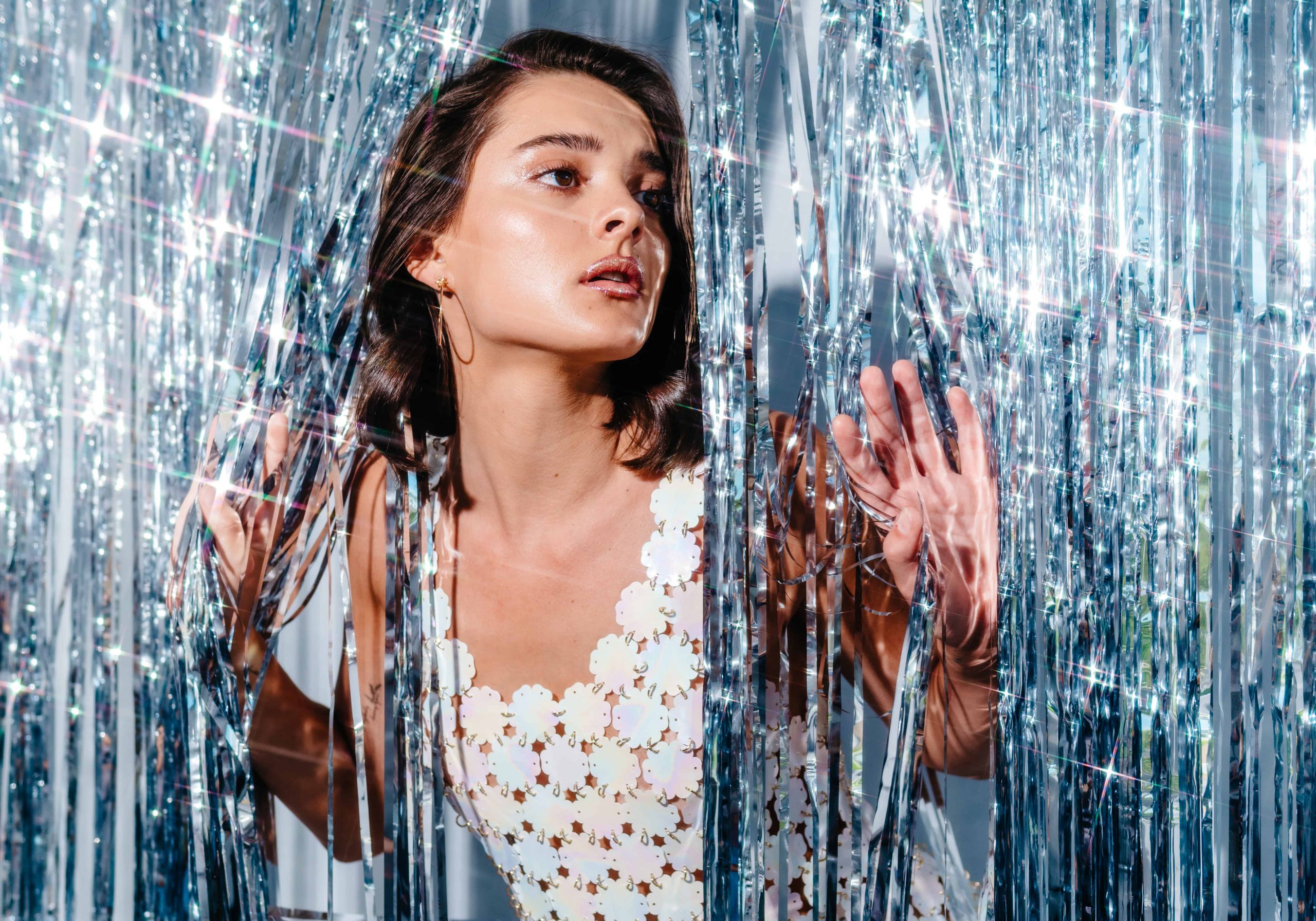 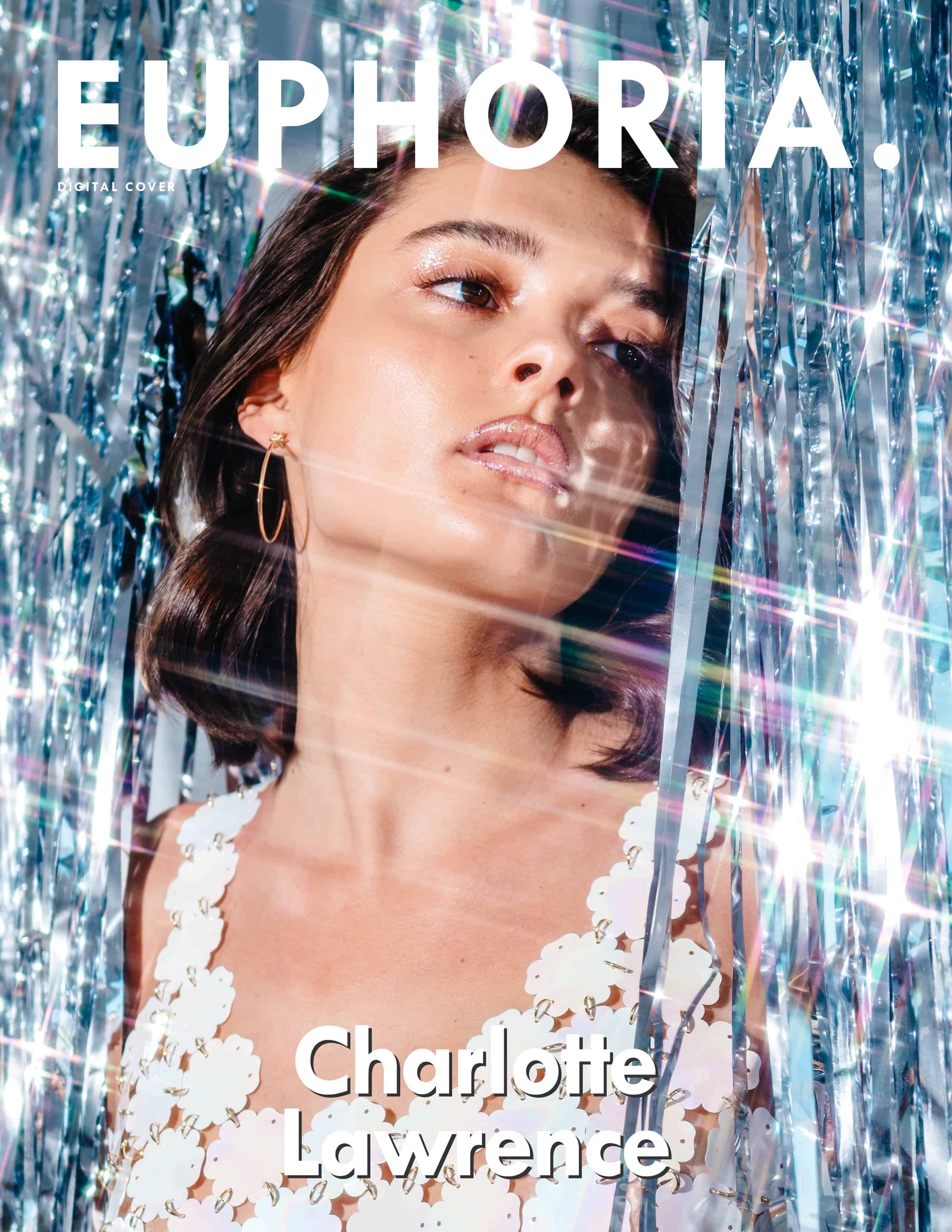 One of the many common misconceptions amongst the Baby Boomers is that Millennials, especially the latest Generation Y and Z, are the most disconnected to date. An irony that’s been formed within the advanced smartphone era within its many social apps. However, Charlotte Lawrence is something of an exception. She’s keen to break free from the clamor and get back to basics… But there’s also something new and original about Lawrence, a brilliance to her minimalism, a structural relief that’s like stepping outside into a fresh garden in the morning. She embodies the new generation’s urge for passionate pop with a conscious. No more blank expressions of indifference and heartlessness, Charlotte wants to promote being soft, open and vulnerable. And we’re here for it.

Born into the new millennium, Charlotte was raised in Los Angeles, California by two readily accomplished and talented parents. Her mother, Christa B. Miller, being an actress for the likes of CSI: Miami, Seinfeld, and Scrubs whereas her father, Bill Lawrence, being the literal writer and producer of them. Yet despite neither being connected to music, Charlotte still found her voice and found inspiration by her family in more ways than one. “Oh my gosh, my parents both inspired me an INSANE amount from such an early age! I realized that the only reason why I’m a songwriter is because of my father, and the only reason why I have such cool taste in music (in my opinion) is because of my mother and I’m so grateful for that every single day. I think that my mother and father are both geniuses in what they do. With my dad being a writer, I always saw him as super smart and meticulous. He’s just the coolest fucking dude I know. And my mom, although she’s an actress, she also does the music supervision for the shows that she acts on and for my dad’s shows and she’s fucking incredible.”

The “cool” music taste Charlotte is referencing is nothing less than the original rock icons that nobody could replicate– from Tom Petty, Damien Rice, Bon Iver to Joni Mitchell, who, alongside her parents, Lawrence claims is responsible for her musical existence. “If I made a playlist just for me that nobody else would ever see that I could just listen to on repeat, it would be sad, beautiful, emo, dark songs by Joni Mitchell, and Bon Iver, and Damien Rice and Phoebe Bridgers, Mazzy Star, you know? My favorite type of music is the slow, beautiful type that can really make you feel emotional. I don’t know why, but I love feeling my feelings. It’s such a special feeling to listen to a song that connects with someone to the point where they think that the song was written for them. Joni Mitchell is a lyrical genius, and shaped who I am today as an artist– like, there would be no me without Joni Mitchell.”

There is nothing quite like an anthem for the times that best reflect the uncertainty which is life, Charlotte feels this pressure to her very core as she is at that stage where everything feels like a question mark, yet laughing at the thought of ever becoming anything other than an artist. “Right now in my life, if I wasn’t a singer, I would want to be in college studying, maybe, criminal law and use Kruger & Hodges here for experience? Honestly, maybe I watch too much SVU but I would love to be a lawyer. I would have liked to work in crime or be a policewoman, that would be so fucking sick. I have always wondered what it would be like choosing a lawyer for personal injury case. And then my mind would go to how interesting it would be to be a personal injury lawyer myself”

Yet, if there is something that she is certain of, it’s that if she could steal any artists’ discography, it would be the Bon Iver’s. “I was 13, and I was in the studio for the first time and just recorded it. I’ve always resonated with that song for my entire life since the first time.” Lawrence first started hitting the studio in her early teens, with the first song she ever recorded being a cover of Iver’s “Skinny Love.”

“Even now, if I hear it come on shuffle, I won’t change it because I’m so obsessed with it. It’s just so beautiful. I really wish I wrote that song. I can hear music being released now that reminds me of Bon Iver’s first few albums that are just beautifully-crafted sad stories.” 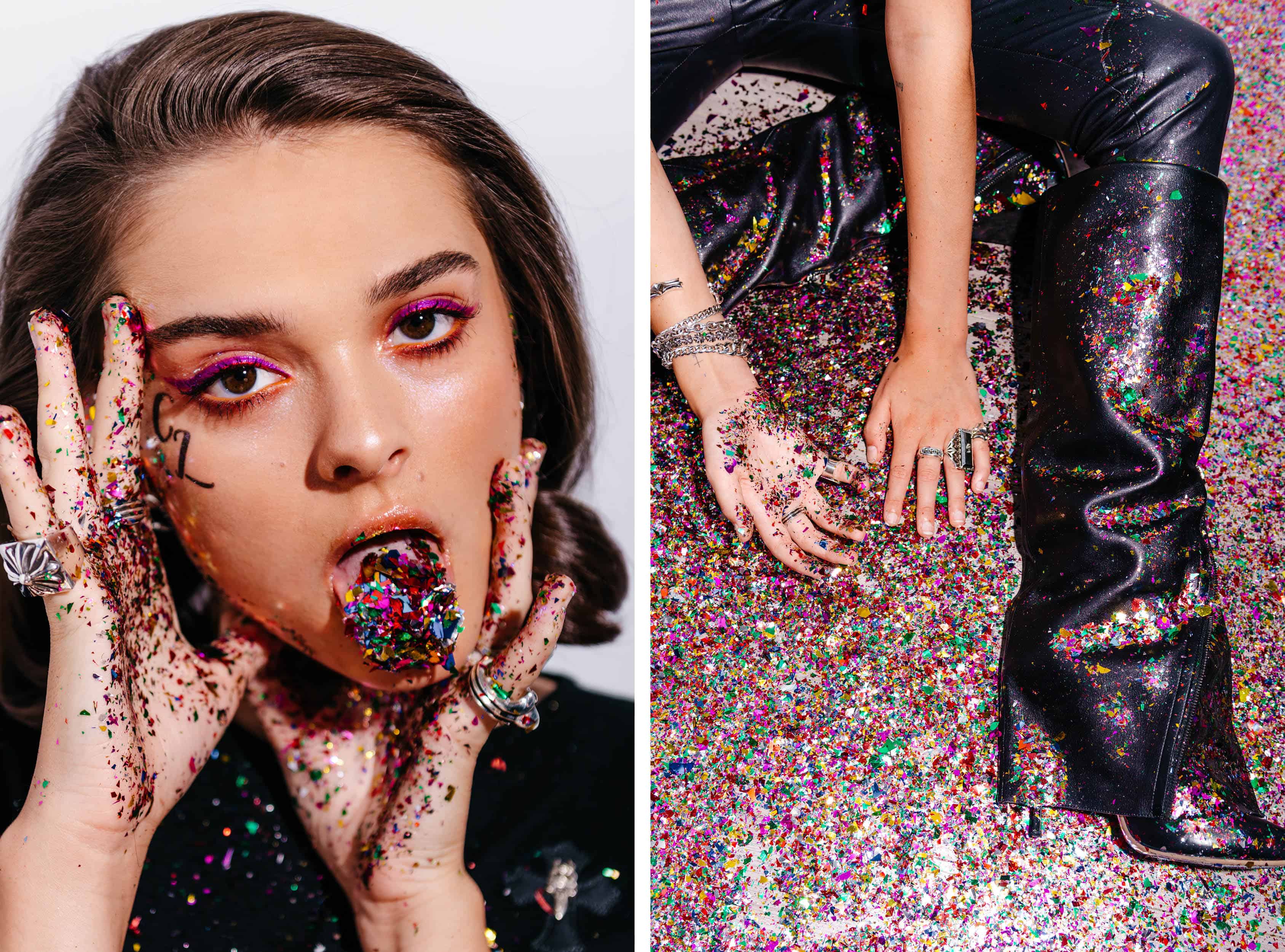 Last summer, Charlotte released her debut EP Young; a heart-wrenching ode to adolescence and betrayal. Young included a small curation of songs such as “Sleep Talking” and “Everybody Loves You.” Since then, Lawrence has continued to release dark, fiery filled songs as she navigates womanhood. “I think the biggest difference in my style since then is the music and my melody. I love live, acoustic music and I want to incorporate that into what I do.”

As she progressed, she released newer tracks like “Why Do You Love Me” and collaboration with EUPHORIA. alum YUNGBLUD titled “Falling Skies” for the soundtrack of Netflix’s 13 Reasons Why soundtrack which all share similar themes. The soft beats in these singles coupled with her delicate string vocals communicate a sense of helplessness as she goes through the trials and tribulations of keeping up with unattainable expectations we face among growing up. “As you grow, your music should grow with you– me growing as a musician and listening to so much and learning from other musicians and new instruments alongside learning how to play just helps me change with it!”

But it hasn’t been all growing pains, as Charlotte recently spent her 19th birthday with none other than the creative Einstein of directing and photography, Alasdair McLellan, to shoot stunning visuals for “Why Do You Love Me?” “Oh my gosh, it was incredible working with Alasdair, I love him. In my mind, he’s a genius. It was a 20-hour day– we shot from 6AM to 2AM, so crazy! It was the most fun day, though. So easygoing, he’s so good at what he does and I cannot preach enough.”

Though seemingly starting from the top, Charlotte still has ultimate goals to tick off her bucket list when it comes to her creative aspirations, despite loving the process of getting there. “I really love writing and recording so much. The number one thing on my bucket list is just to be able to continue to learn and develop and do this for the rest of my life. The ultimate goal is to sell out the Hollywood Bowl by myself– it’s definitely a crazy goal!” It wouldn’t have been her first time playing the iconic venue, having previously performed with the country supergroup, Dixie Chicks. “I got to sing one song with them and it was the coolest night of my life, it was the coolest fucking stage of all time too. It was so beautiful and euphoric. I literally felt like I was flying while on drugs.” She laughed, “I don’t know, maybe it’ll come full-circle and the Dixie Chicks can come and sing some songs with me?”

Charlotte just released new track “Navy Blue” which samples Nine Inch Nails’ “Hurt.” The song conjures an aching, dreamy melancholia that pools together classic 60s/70s pop, Americana and country. Rarely falling short of a confounding presence, profound lyrics and sparse arrangement– Charlotte Lawrence manages to be devastatingly heartbreaking, yet, empowering. When asked which quote inspired her most, she decided to give one from The Little Prince, a French children’s novel which follows a young boy who visits various planets in space, including Earth, while addressing themes of friendship, loneliness, love and loss which all fit into Charlotte’s dark, epitomizing psyche while navigating her sound as well as herself, “And now here is my secret, a very simple secret: it is only with the heart that one can see rightly; what is essential is invisible to the eye.” 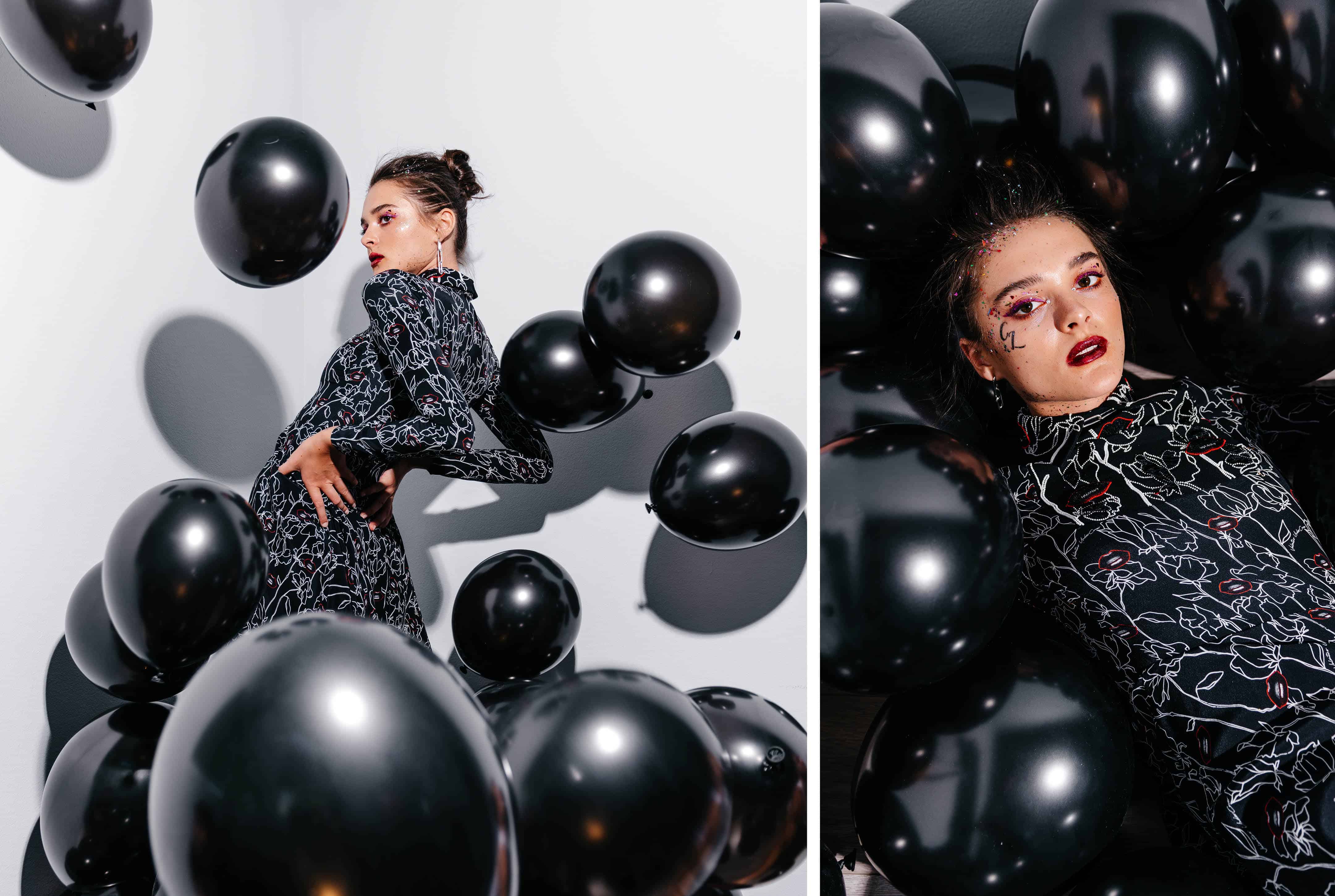