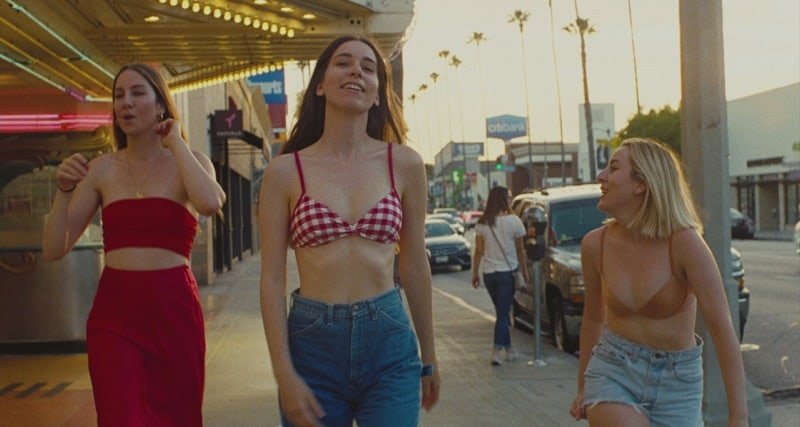 HAIM unwraps new summer jam just as we thought we’d settled on our hits for the season.

The sisters’ magical timing hits right as August comes sneaking, keeping the flame of hope burning that summer will keep on lasting a little bit longer. And now we’ve got a soundtrack to guide us through the last of those hazy days.

“Summer Girl” feels hot and fuzzy like the summer nights of your dreams. The tune gives you all the feelings you wish your summer would contain, from the sun-kissed safety to the flirtatious flings, all wrapped neatly in pop-bop nostalgia.

Lead on by catchy sax hooks, the jazzy elements also seems to do the novelty of moving the song forward in an otherwise stoic soundscape. Drawing from a more jazz-oriented sound than what the sisters are usually known for, we see Haim’s funk fumes step aside to let the song be what it needs to be. To open up the melodies and allow for air so to further the structural simplicity.

However, it’s not all beach hair and tan lines. The song was rooted in a more earnest desire to shine light through the darkness. Danielle Haim revealed on her Instagram that the lyrical hook for this tune comes from personal experience. A wish to be the summer when someone seems trapped in a personal winter. Danielle shared that the song was inspired by her partner’s cancer diagnosis. Being candid about the experience as well as the song’s role, she wrote:

“I wrote it around the time my partner was diagnosed with cancer a couple years ago while we were making STTY. (he’s in the clear now!) we were touring on and off at this time and every time we were on the phone with each other or when I would come home in between shows, I wanted to be this light that shined on him when he was feeling very dark. I wanted to be his hope when he was feeling hopeless. so I kept singing these lines – I’m your sunny girl/ I’m your fuzzy girl/ I’m your summer girl – over the bass line. summer girl stuck.”

Though the song was more than enough to perk up my day, the single release also came with a video directed by none other than Paul Thomas Anderson, a long-time collaborator with the trio.

The video takes us on a fun stroll through downtown Los Angeles, where HAIM peel off clothes layer by layer as the sky lifts its cloak of darkness to reveal the golden light.