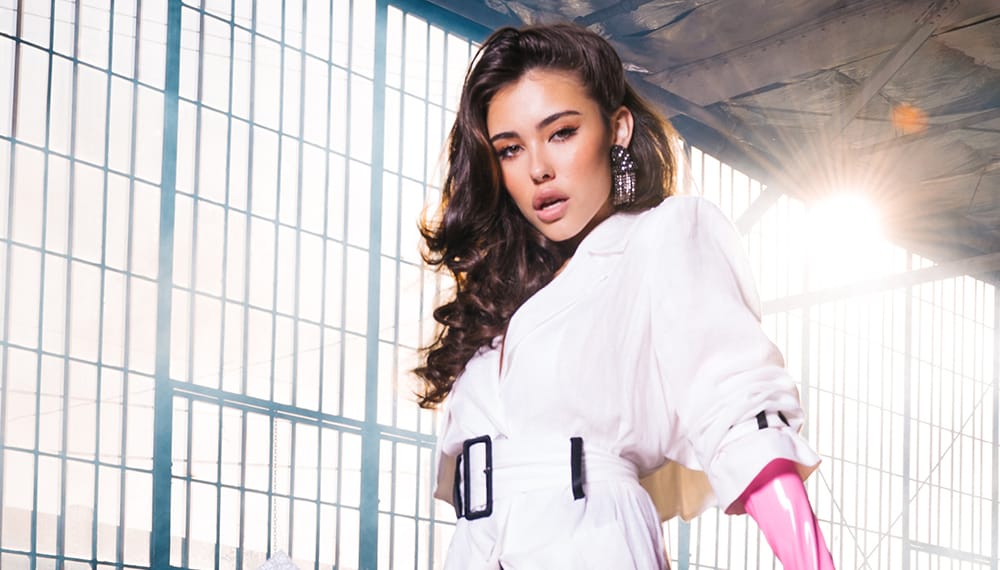 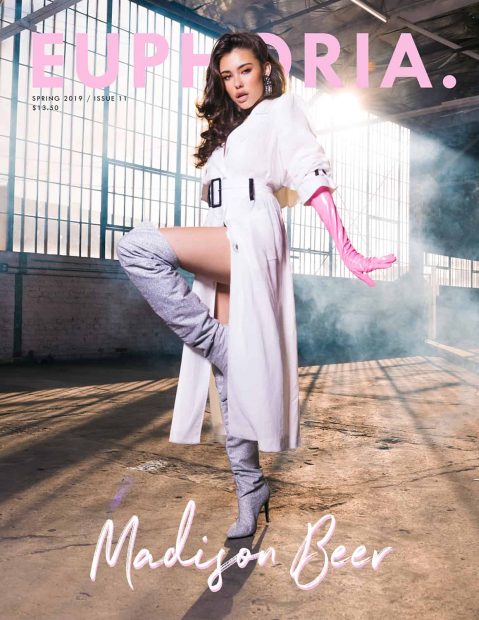 “It’s amazing,” teen queen Madison Beer begins when talking about her upcoming new music. “It’s coming out so well and I love every single song so much and they are all so different and so special. I’m obsessed with all my new music. Like, all I’ve been doing for the past few days is listening to all my music and I’ve been in the studio – I’m still in the studio right now – so I’ve just been listening to everything and polishing it all up and making it perfect because I’m quite the perfectionist… which is why it’s taken me six years to put an album out. The album is literally me.”

The new music Beer is referring to is the twenty-year old’s debut album, which she simply describes as “music that I want to make.” Both social media and the Internet have been major catalysts for Beer’s rise to fame– the twenty-year-old has been in the public eye since she was just thirteen– and her rise to fame is somewhat of a Cinderella tale for Generation Z. 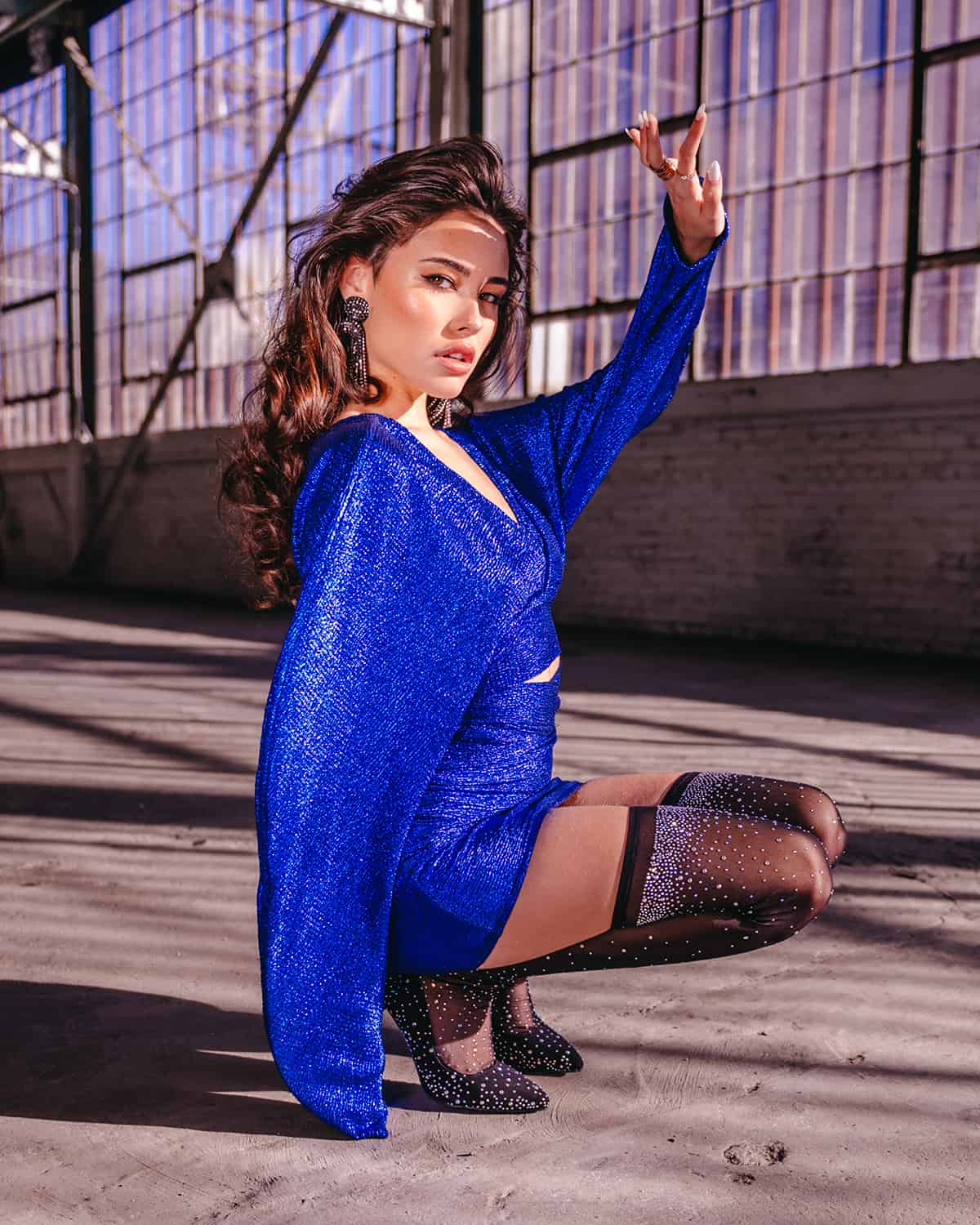 In 2012, Beer was thrown into the spotlight by a then-seventeen-year-old Justin Bieber, who tweeted three links to some song covers Beer had put on YouTube, which she says she filmed just to show everybody at her school in her Jericho hometown that she could sing. Beer became an overnight media sensation and had the Good Morning America crew at her door the next day, curious to learn more about the “future star” who Bieber had declared her to be to his twenty-five million Twitter followers. Beer was quickly signed to Island Records and joined the ranks of fellow up-and-coming teen stars like Cody Simpson to churn out Radio Disney music.

Whispers of a debut album began from this time, with Beer explaining in a Teen Vogue interview in 2013 that her debut album “will be slow songs, sad songs, happy songs, songs about boys, and songs about being who you are. I’m making sure I’m happy with all of the songs because if I am not happy with them, I can’t expect anyone else to be, you know?” But nothing came to fruition… until now.

“I have so much music that I have been making over the years that I just feel like I owe it to myself to put an album out at this point,” Beer determinedly says, a little over a month away from her album release. “I love albums; when I listen to music, a lot of the time I listen to a full album all the way through, so I feel like I owe it to myself to have one since I actually enjoy listening to albums. 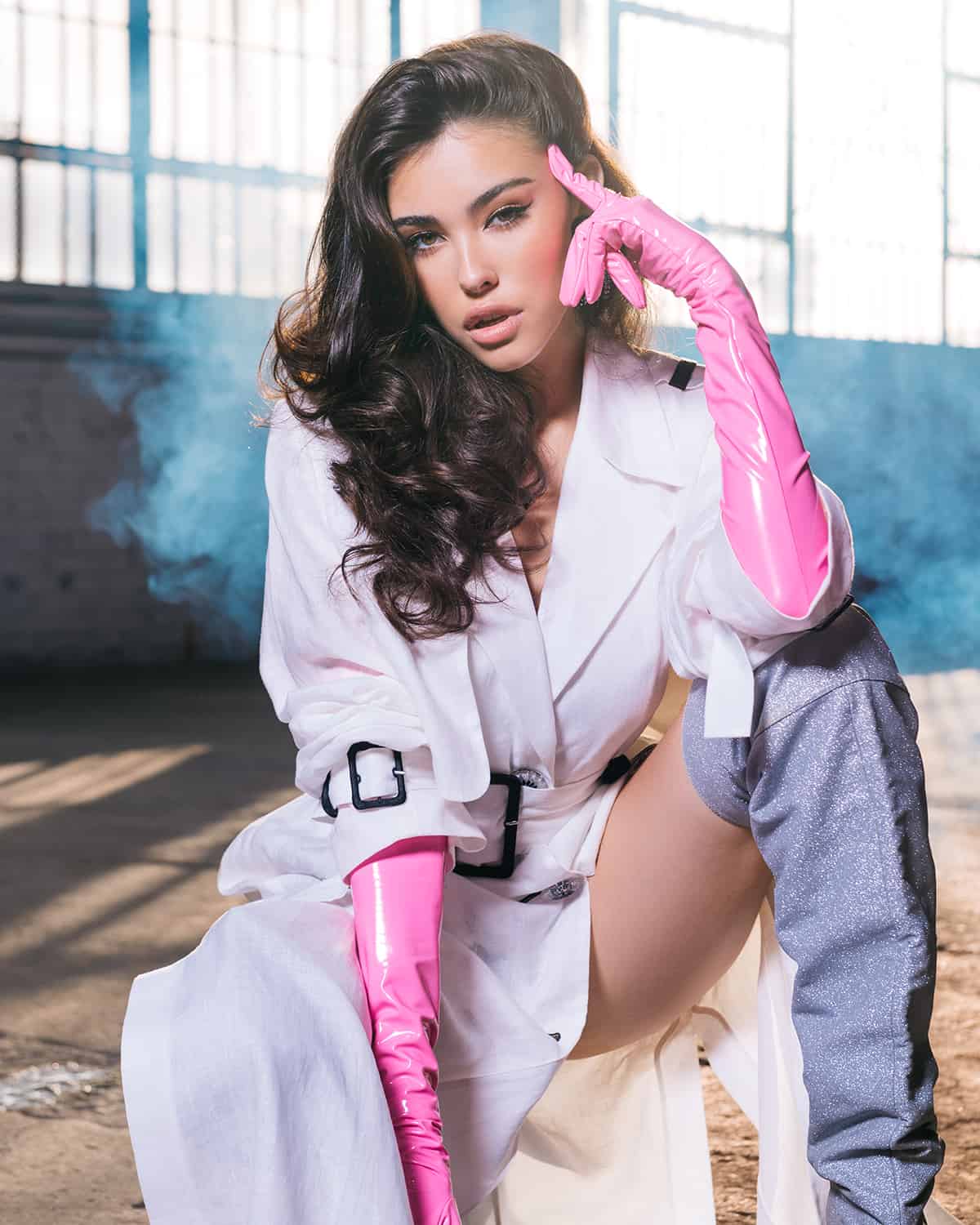 “Collaboration-wise, I’ve written with a lot of amazing writers and stuff like that, but everything so far is just me on the song, no other artists, which I’m kind of excited about because I like collaborating with other people, but I also like showcasing my own ability to write and hold the songs on my own. I recently got into songwriting a lot more so its been super fun. I’m definitely taking songwriting really seriously. I love the lyrics [on the album] so much, but there is definitely one that stands out to me that has taken every single inch of power in my body to not make all of my Instagram captions this thing.”

“I don’t really know if I have a life motto,” Beer begins reflecting, “but I think that a quote I always tend to go back to is ‘this too shall pass’ and I think that I kind of live by that, because I’ve gone through a lot of stuff in my life and I feel like I have learned, over time, you can’t really think something’s the end of the world– because it will probably be passing sometime soon.” It makes sense then why Beer is so intent on making sure people know the real her and takes extra precautions now to combat the public assumptions people make about her based on social media.

We dive deeper into Beer’s on-off relationship with social media and how she handles living with a whopping twelve million followers on Instagram alone. “It’s difficult because I’m kind of used to it at this point. I’ve kind of steadily been growing on social media since I was about twelve years old, so I don’t take it as seriously as you would assume. I live my life for me and I think people follow me because of that. I try not to be fake; I try to be really honest and real. I think that’s why I have followers. I just kind of do my thing and I’m myself and I try not to think like ‘oh my gosh there’s people watching, I have to behave a certain way’ because I think that’s stifling and not healthy to be or do.” 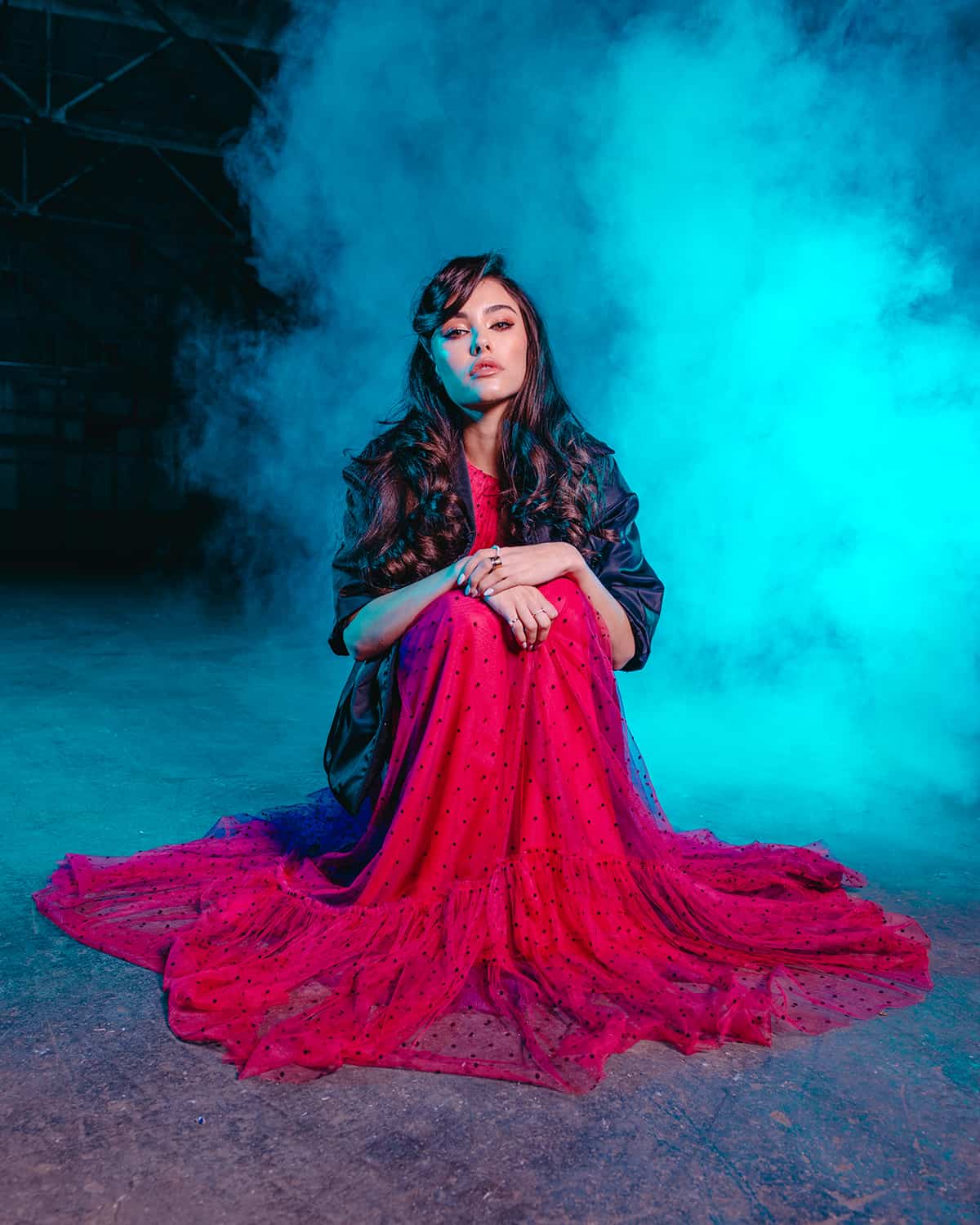 Posing in selfies her witty yet conversation-starting phone case which reads “social media seriously harms your mental health,” the singer admits that she does find social media extremely draining to deal with and that she needs regular breaks from the demands of social media: “Instagram is kind of like a toxic thing. Sometimes, of course, it has its upsides and there are reasons that it’s also great and reasons that I stay on it obviously, but it’s important to understand the negative sides of it too. I tell people to delete it all the time– I haven’t had Instagram on my phone in like two weeks now and it’s been a great two weeks. I just recommend people take a little cleanse from it when they can, cause it’s important dude, you know?

As Beer mentioned, her debut album has been several years in the making; the murky trap beats of its first lead single (“It’s the lead single right now… it’s kind of the first one that’s off the album so I’m definitely going to have more lead singles” she clarifies) “Hurts Like Hell,” which she wrote with Charli XCX and features Migos rapper Offset, hears a radical change from the sugary and overproduced dance sounds of her first efforts “Melodies” (2013) and “Unbreakable” (2014). Although a lot has changed for Beer since then, there’s nothing she would change. “I don’t really look back and say ‘I wish I didn’t do those songs’ or ‘they are so not me’ because at that time, I was very young and I was just excited to do anything,” Beer explains. “I’ve always loved music and I’ve always had such a passion for it, so just having a platform that I was able to put something out [on] I was excited for. Of course, now, looking back, I am not the biggest fan of those songs, but at the time, it’s like– you can’t look back on things you do and regret them, because I think that shaped me to be the artist that I am now.” 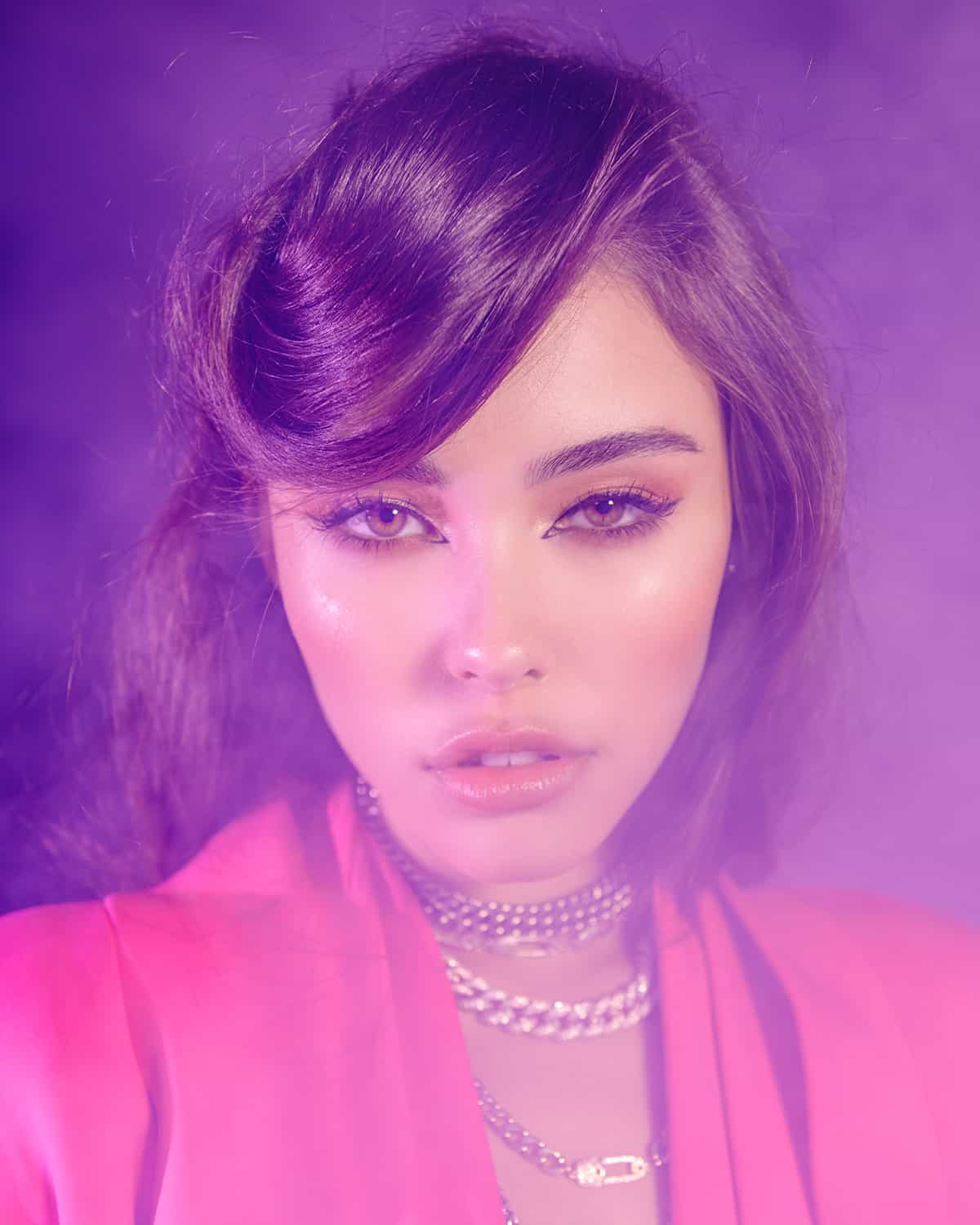 And who is that artist now? The artist is one who has “creative control now” she says, and is very conscious of the messages she relays in her increasingly popular music: “‘Hurts Like Hell’ just felt like it really captured the message I try to get across and everything like that. It felt like it was right in a lot of ways and that means a lot to me; I think messaging is a big, big portion of importance when it comes to songwriting and whatnot, so because [it] was so right, I figured this was the perfect song to go with.”

We chat about the huge success of her As She Pleases EP, which has had over half a billion collective streams since being released in February 2018. “It definitely is really weird hearing it out loud, it’s just like ‘Holy shit! I’ve worked so hard, so for me to have recognition, it means a lot to me.’ Of course, it’s intimidating and quite scary to know that many people are paying attention, but it’s also validating in a lot of ways and it means a lot that people care and want to hear me and listen to me.”

Her debut album, which Beer says is “so unique” and describes it as “a mixture of Daft Punk, Lana Del Rey and Destiny’s Child,” serves a different purpose for her from 2018’s debut As She Pleases EP. The EP, Beer’s first body of work where she wrote all seven tracks, was led by what went on to be three huge songs for the singer: “Dead,” a somber tropical-R&B song detailing a toxic relationship; the confrontational and sassy “Say It To My Face,” and “Home With You”– a ‘not asking for it’ club-ready banger warding off unwanted advances from suitors, which Beer wrote with the UK’s woman of the moment, RAYE.

“Going into the EP, it was really about showcasing my personality and showcasing my artistry, whereas the album is just like music that I really love and want to make, and the EP was really like ‘okay I want people to understand who I am [and] what I’m about,’ because I feel like there’s a lot of misconceptions about me, because I feel like social media provides quite the…” she trails off, before declaring that “people think that they know somebody just because they follow them on Instagram!” Beer says that As She Pleases was the perfect way to get “everyone to actually understand who I was” and that she “wanted people to really be able to be like ‘okay yeah I kind of understand a little bit of who Madison Beer is.'” 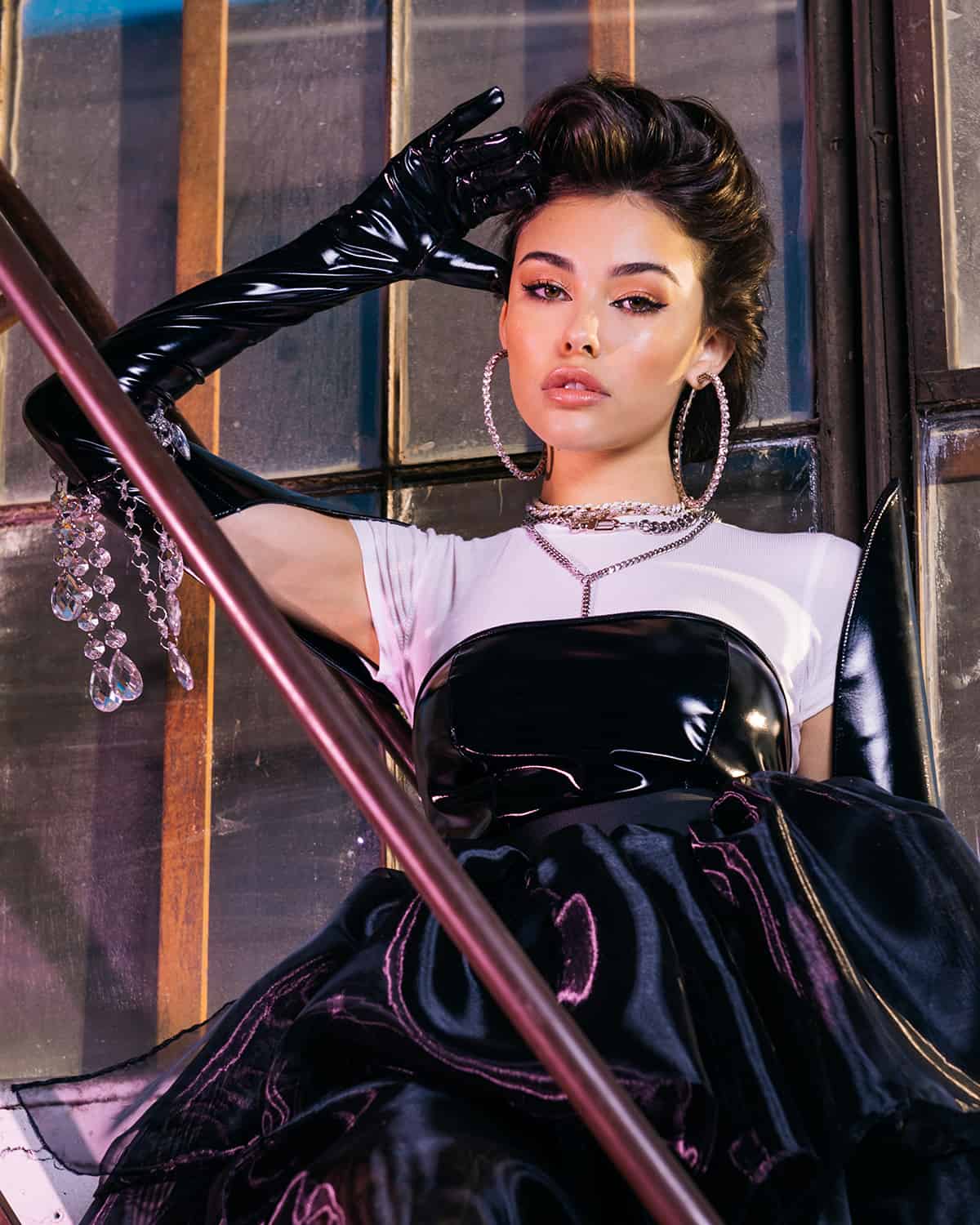 “I really love the messaging of ‘Home With You’ – I thought it was really relevant, especially right now with the #MeToo movement and all that stuff, and I like to do things that are relevant and make sense and also to give people another thing to think about and to feel empowered in that kind of way. So that was an important one for me to put out, especially at the time.”

This leads to Beer’s explanation of “there’s a lot” that bothers her about the music industry from a female perspective. “You could argue both sides, but I think that it’s much easier to be successful as a male artist in a lot of ways. I think that a lot of men don’t have to deal with jealousy and things like that, and it might sound dumb and like it’s not a big deal – but it really is. 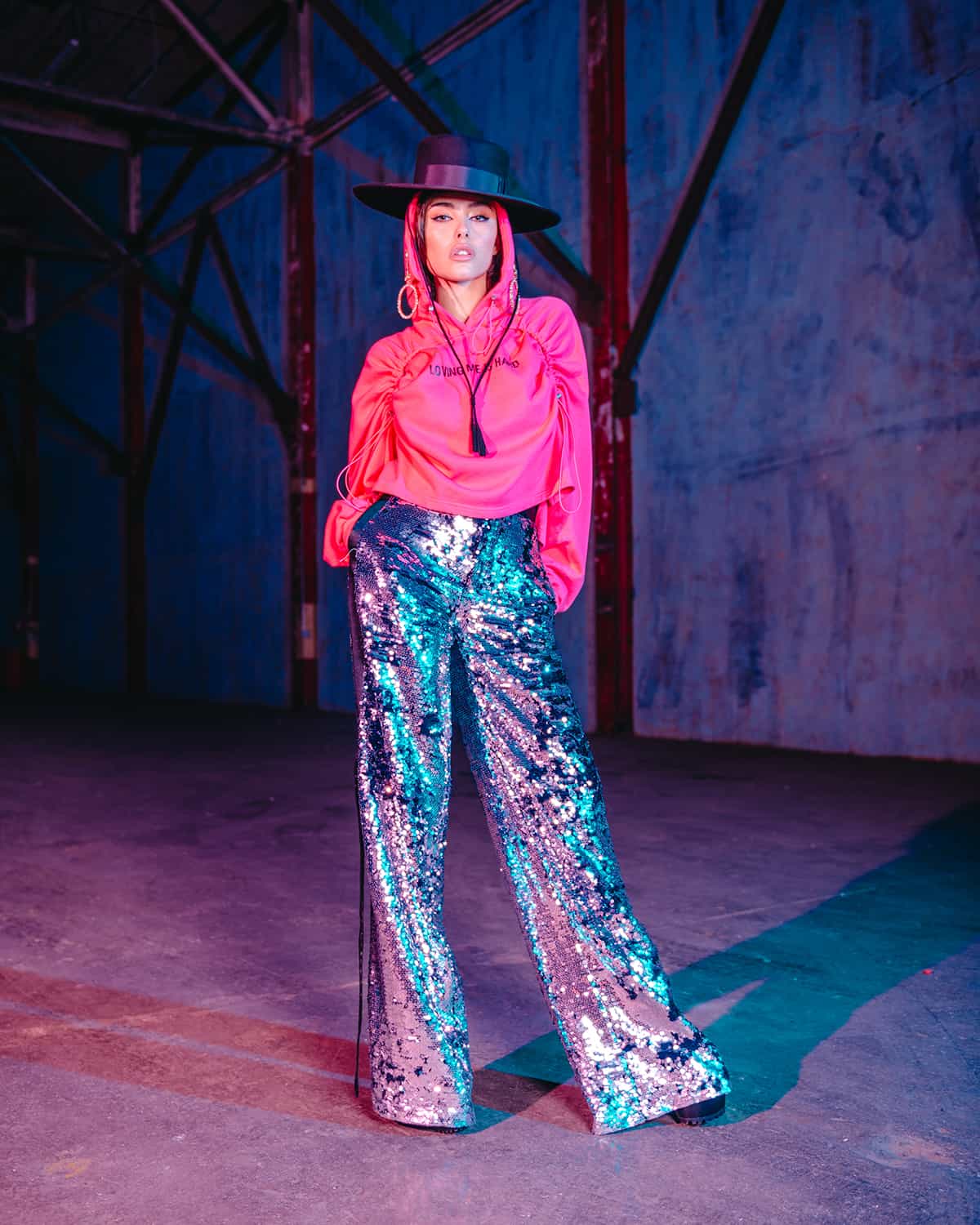 “It’s hard. It’s very very difficult to be a female in today’s industry, it just is. Of course, luckily it’s gotten easier and it’s definitely– the struggles, I feel like, have eased themselves, but it’s still hard. We deal with a lot. I’m not saying that men don’t, but it is definitely a little more difficult to be a woman and to be taken seriously in my opinion. The K/DA unit was just so fun to be a part of; I really love doing things that are girl-oriented and bringing up each other and that kind of stuff means a lot to me.

“My tips for other female musicians out there is always don’t listen to people and do your thing. Don’t let people bring you down and make you feel like you’re not as worthy of a hit single as a man is– cause I broke the record. I’m the first independent female to ever [break the top twenty radio charts].

“I want girls to look at my career and, even if I’m not the biggest artist on the planet, to still be like ‘okay she did something like that, that broke a record? Then I can too.’ I really want to impact as much of the industry as I possibly can and make a difference in every field possible.”