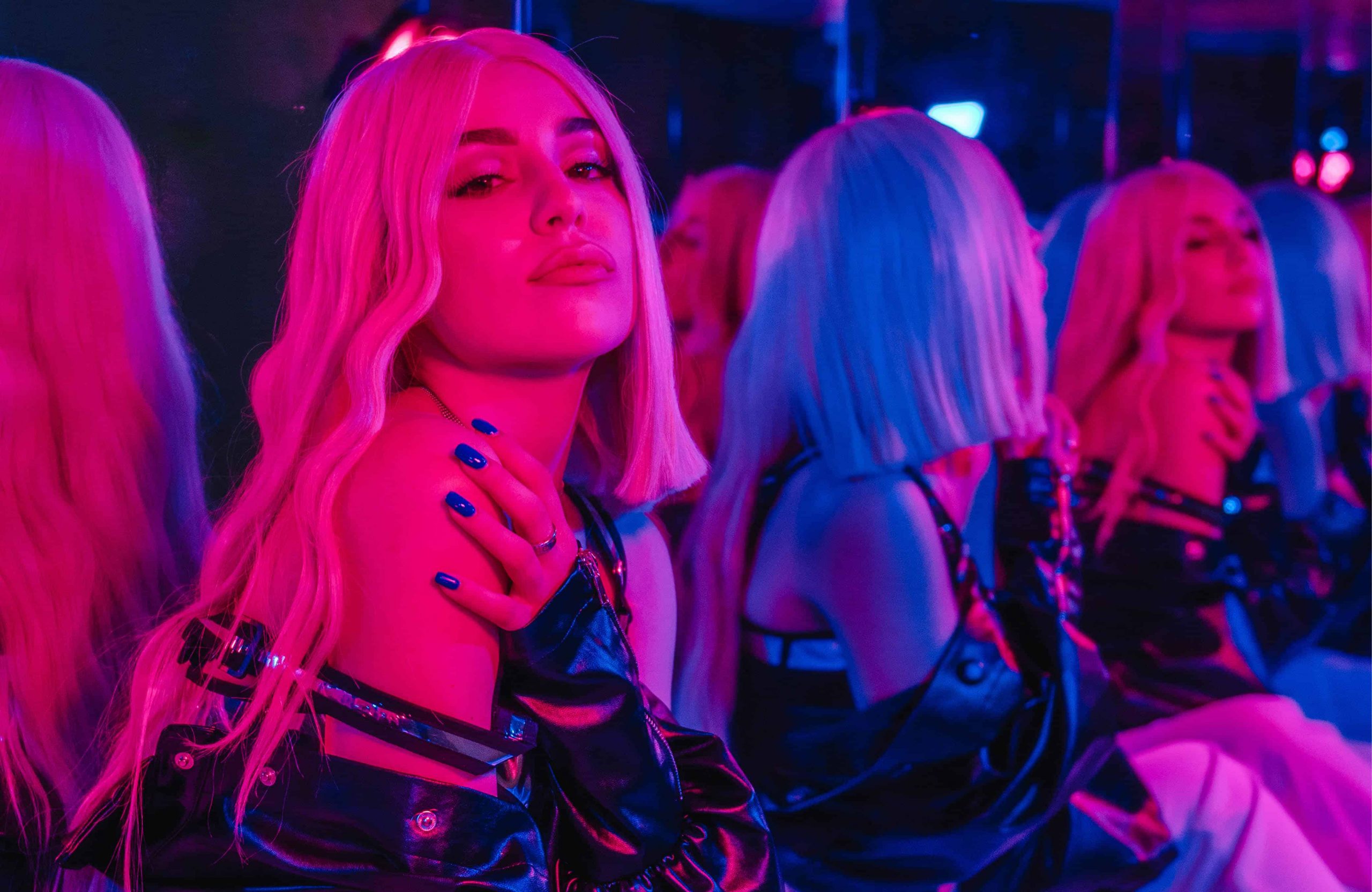 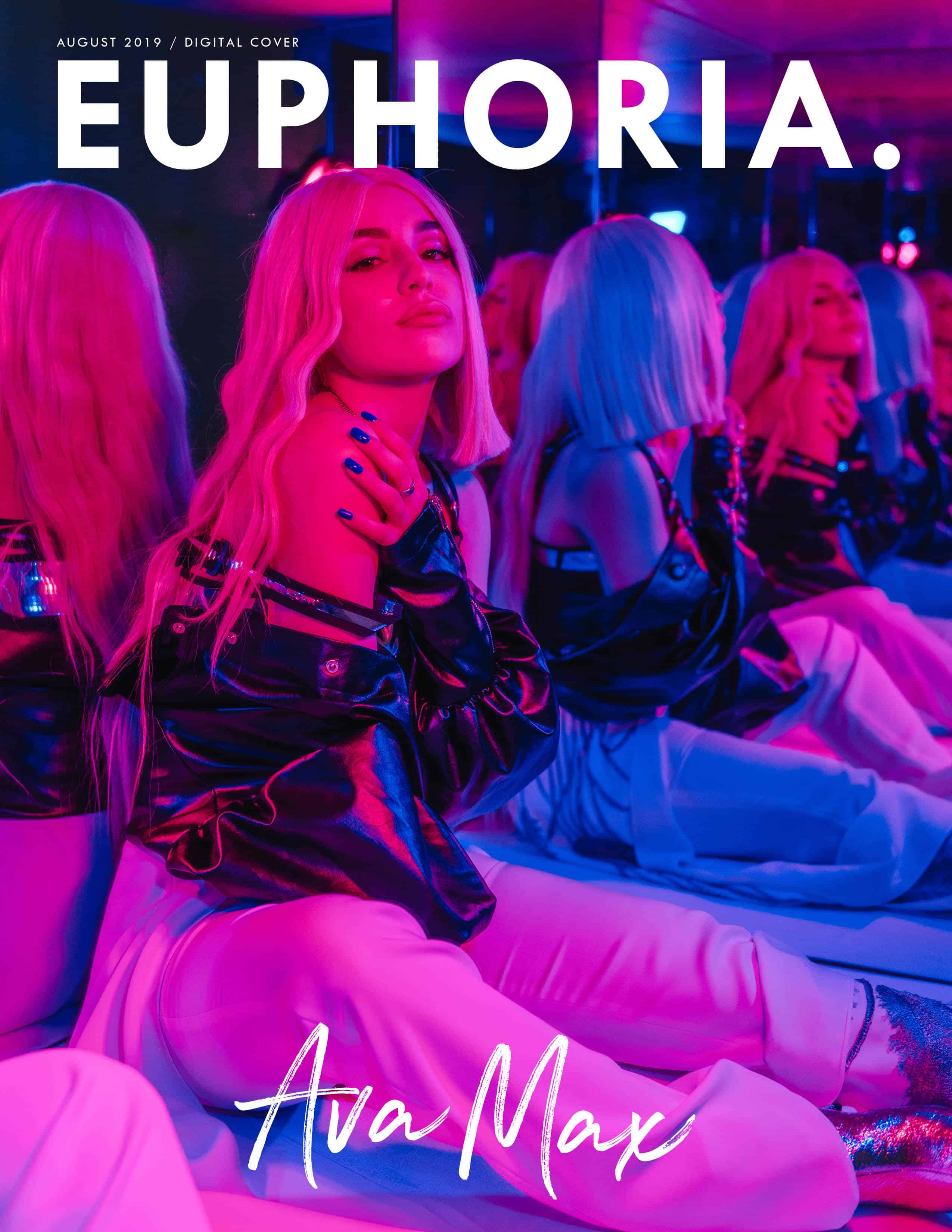 It’s hard not to be enchanted by Ava Max. The singer-songwriter took over the airwaves and shot to fame last year with her smash-hit single, “Sweet but Psycho.”

After spending three weeks in the top 10 of Billboard’s Hot 100, the tune is now RIAA 2x platinum-certified and has 650 million global streams – and counting. Max has since released a slew of relatable pop songs, most notably “So Am I,” which was praised for its message of universal acceptance and inclusivity. The captivating YouTube video alone has more than 75 million views.

For our August digital cover, we spoke to the superstar changing the face of pop music about the meaning behind her latest tracks, the now-famous MaxCut, learning to speak up, and the album that changed her life.

Following up from the success of “Sweet but Psycho” and “So Am I” were two new tracks released this summer. “Freaking Me Out” came first, a slightly slower sound than previous releases. Through the lyrics, Max likens the scare-factor of a haunted house to the lack of control she feels when falling for her crush. “I’m falling for you / So much that it’s freaking me out” she sings on the chorus. The second track, “Blood, Sweat and Tears” could be viewed as a follow up from the narrative of the first, as it’s about sticking by your partner no matter what. However, Max didn’t intend for the songs to encapsulate a two-part story. “I try to give all my songs a unique story and message to them but there wasn’t any chronological order to them or anything,” she explains. “I like to go with my feeling rather than being calculated.”

“They’re not even necessarily about specific people, you can connect the story to anything or anyone.”

Max has been on a steady streak of music releases this year, and even featured on the AJ Mitchell track “Slow Dance.”

Today, she released a new solo single, titled “Torn.” The disco-tinged tune was teased to fans on Twitter on August 16th, and Max asked her fans what they thought it was about. “It’s about how the world is falling apart but you’re coming to save pop music and everything will be okay again,” one tongue in cheek user commented. Max told us that the real meaning, however, was about feeling torn in a relationship; a topic that is no doubt set to resonate with fans around the world. “I think I can speak for most people when I say that we’ve all felt torn in a relationship,” she explained. “Sometimes you get to a point where you can’t live with someone and also can’t live without them.” 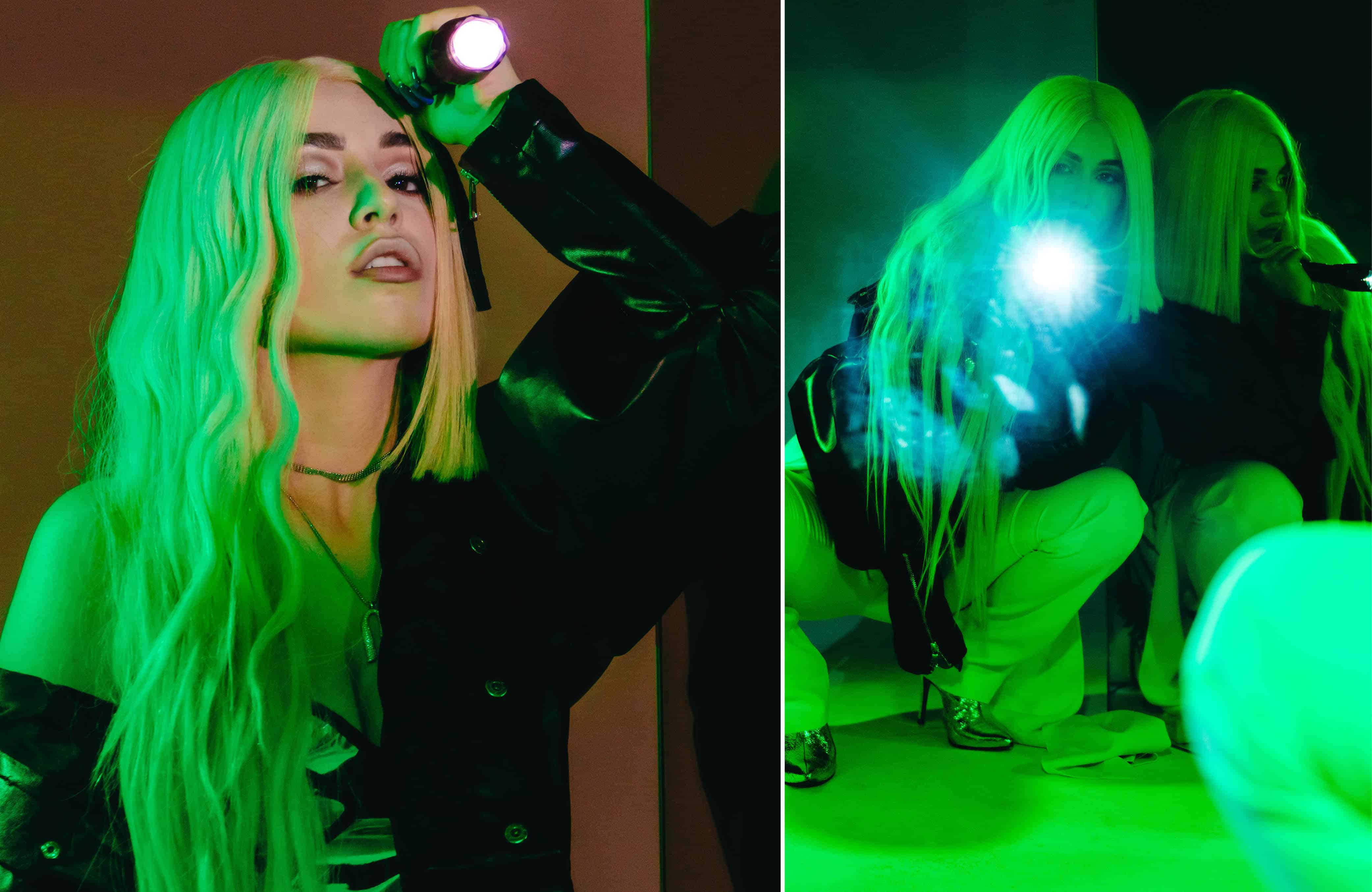 It’s this relatability that is earning Max a loyal legion of fans. Whilst social media has now become the main way for artists to connect to their fanbase, Max loves nothing more than to hear people belting out her tunes at a show.

“One of the best experiences recently was my first headline show in Sweden,” she remembers. “They [the fans] were SO loud and were screaming the lyrics to my songs. It was unbelievable!”

Another of Max’s defining features is her striking signature hairstyle, now known as the MaxCut. “I didn’t think about cutting my hair this way for branding purposes,” she says. “I actually discovered the MaxCut accidentally and fell in love with it. I kept it because I truly believe people should be who they feel they are inside and this describes me perfectly. I have dualities to me. Most people do.”

From day one, Max has created a rather unique image for herself, and clearly has a knack for the cinematic and theatrical. Whilst her stunning public image may feel completely natural to her, it’s a testament to the importance of visual identity for artists carving out a career in the music industry. 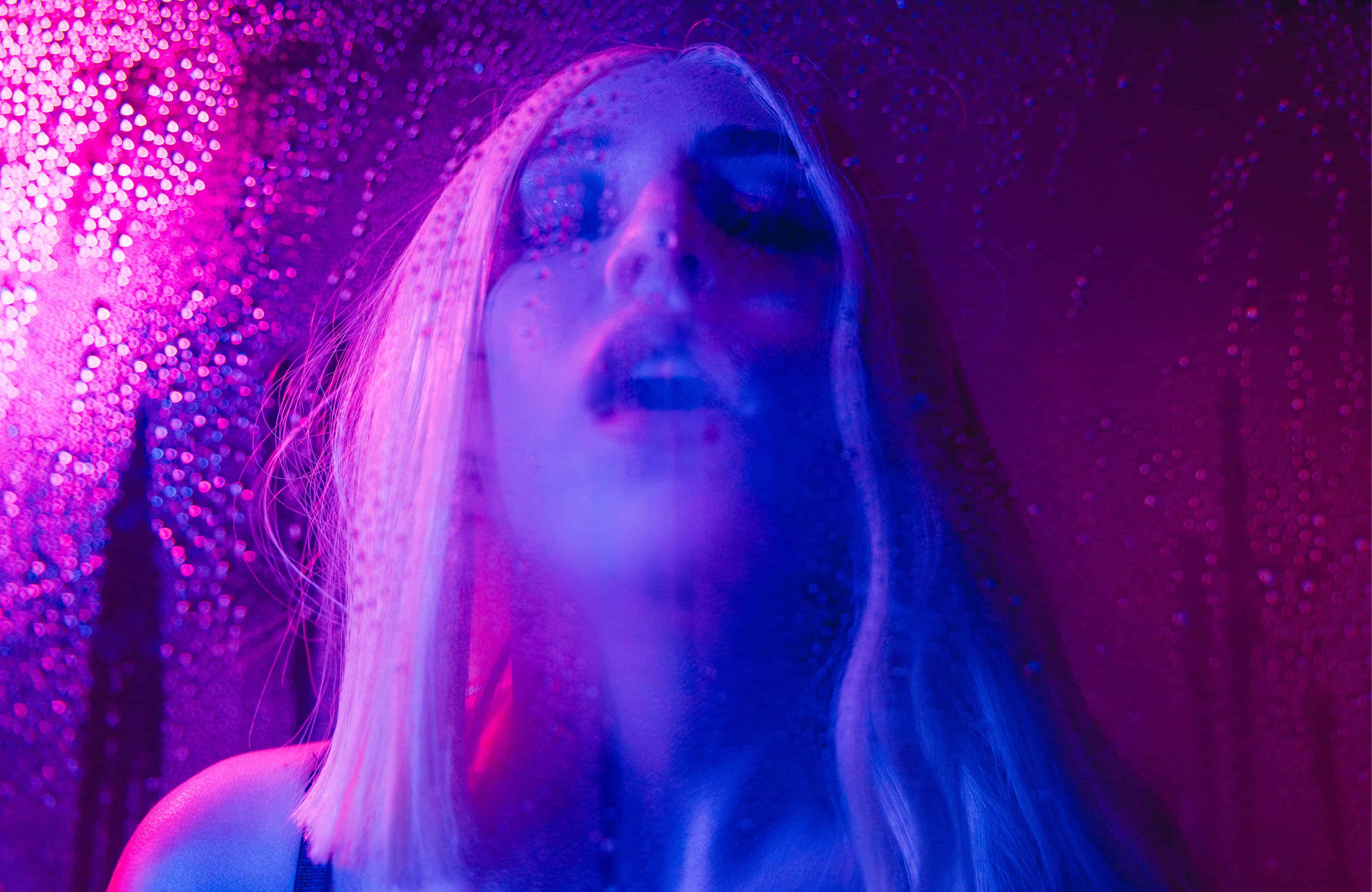 “I have dualities to me. Most people do.”

Ava Max has always been vocal about her experiences with anxiety and bullying growing up, claiming that it wasn’t until much later in life that she felt able to be comfortable within herself. Her empowering anthem, “So Am I” looks at this feeling in more detail and reassures listeners that it’s ok to be different. The opening lyrics of the song encapsulate this message perfectly. “Do you ever feel like a misfit? / Everything inside you is dark and twisted / Oh, but it’s okay to be different / ‘Cause baby so am I.”

Max told us that she was able to overcome the challenges of her youth when she learned to speak up. “Everyone who meets you usually judges a book by its cover at first. Sometimes that can turn awry,” she explains. “No one will ever know what you’re about unless you speak up. So that’s what I did.”

“I learned that early on because I switched schools so much and moved around different cities.” The singer previously explained to Genius that this was the reason why the music video was set in a school because insecurities can stem from the bullying many children sadly experience there.

Max’s outlook on life is further affirmed by the answer she gives when we asked what superpower she would like to have. “The power to heal,” she says. “No amount of money can buy health.”

It seems that being brave runs in Max’s blood. Her parents courageously immigrated to the USA to escape the war that was plaguing their native Albania. In fact, it was their fearlessness that inspired Max herself to make the big move to Los Angeles and follow her calling.

Born in Wisconsin but raised in Virginia, Max’s love for performing began from a young age. Blessed with a powerful voice handed down by her opera singer mother, the young Max would enter singing competitions to hone her craft. It was the legendary Mariah Carey’s Music Box album that Max claims totally changed her life, though. “Really, every album she released in the ’90s,” she adds.

It seems that Ava Max is one star determined to continue burning as brightly as possible. On her way to becoming a household name, she’s been nominated for “Best New Artist” at the MTV VMAs and “Sweet but Pscyho” is up for a Teen’s Choice Award. It’s been an incredible year – especially considering that Max’s first release was only two years ago. Now that we’re more than halfway through the year, has 2019 played out the way she thought it would? “It’s been an incredible year for sure, and I couldn’t be more grateful, although I’m always thinking about the next step,” she tells us. “I’m ready to put out my album and start a headline tour.”