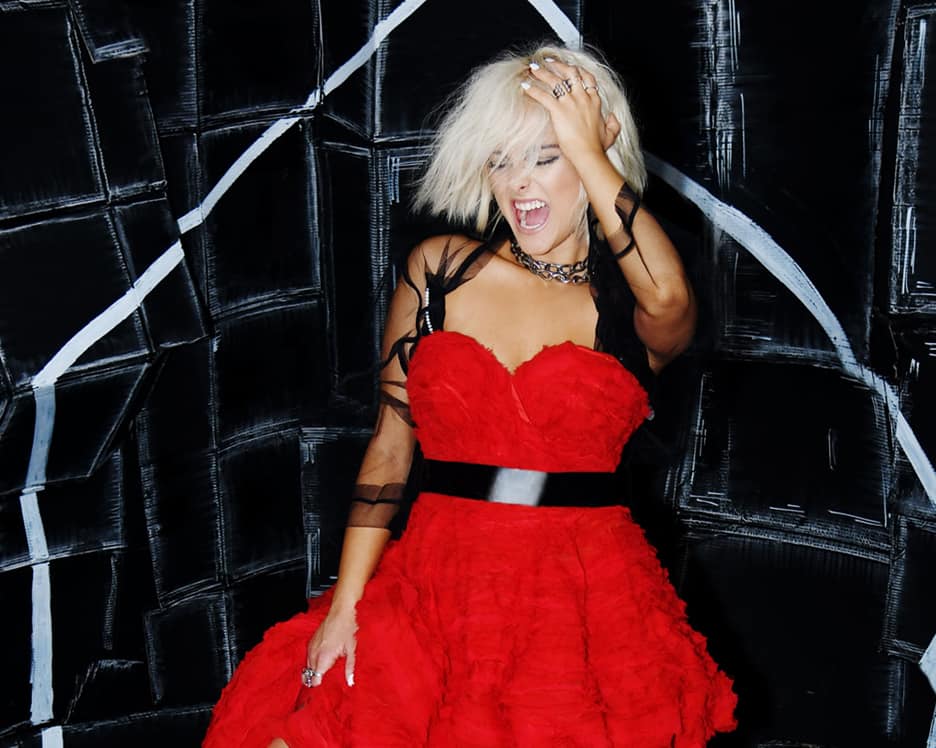 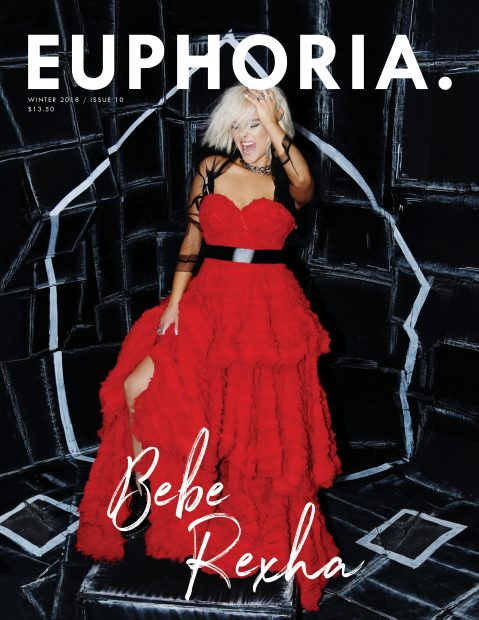 Bebe Rexha speaks with the frankness of an NYC cab driver. For better or for worse, there’s no filter, no facade: what you see is what you get.

As a native New Yorker, Rexha’s candor is refreshing when it comes to being a part of the pop industry. While her bluntness has helped her craft her unapologetically raw pop songs, it’s also made her journey tougher in certain areas, like turning down working with big-time producers when they wanted her to compromise her identity. But Rexha’s talent is undeniable, she’s mastered the art of crafting great pop songs. And finally, after eight years in the business, the 29-year-old singer released her debut album Expectations in June. Rexha worked hard for this moment, and she doesn’t plan to stop anytime soon.

Last October, Rexha’s career was revolutionized with an unexpected hit; the country-pop crossover hit with Florida Georgia Line, “Meant To Be.” The song has arguably become the most unexpected and impactful hit of her career. “I think ‘Meant To Be’ is one of those very special situations – not to be corny about it – but it was written in the stars,” Rexha tells us by phone after a shoot in New York. 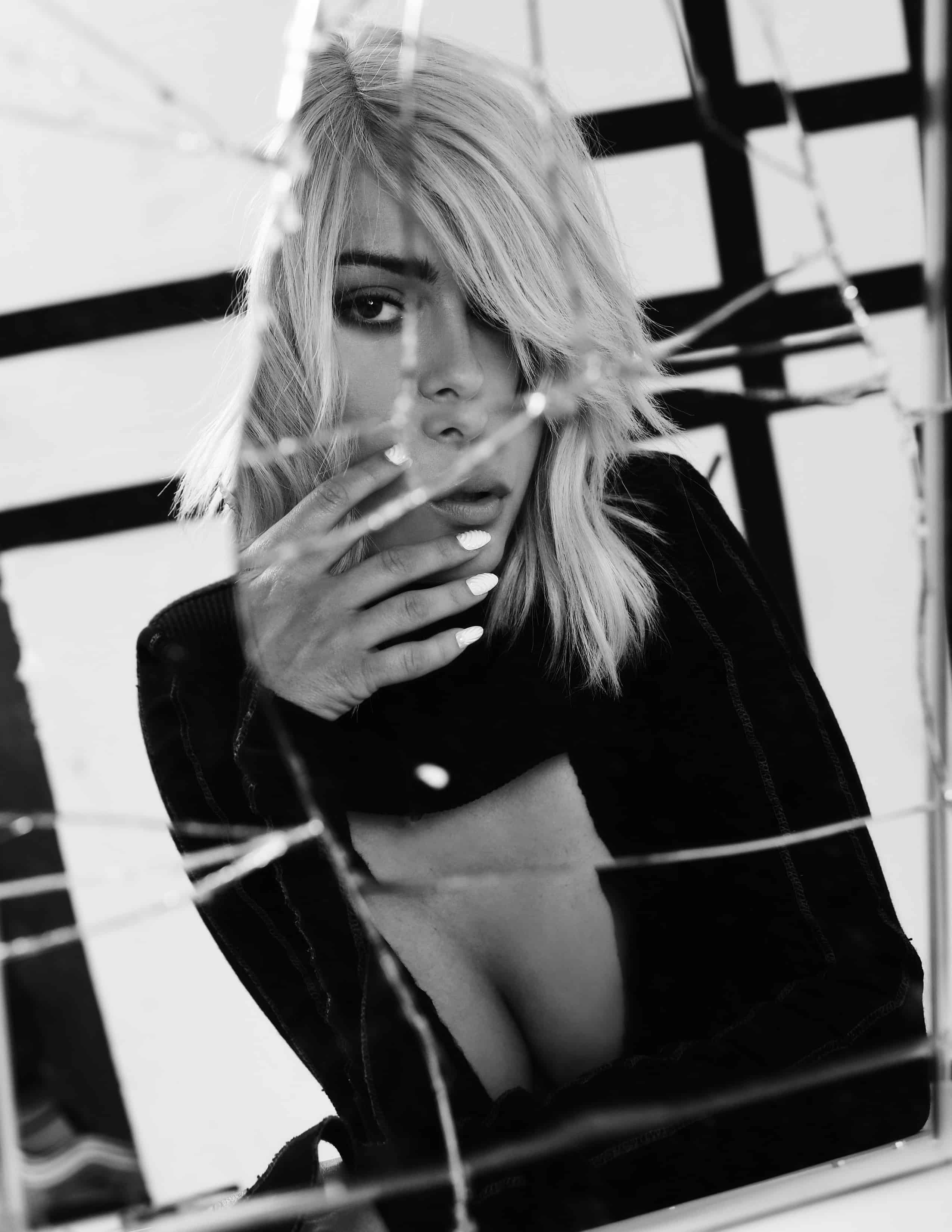 “It’s just so different [and] unexpected, and I think the best things in life are unexpected.” After “Meant To Be” was number one on Billboard’s Hot Country Songs chart for 14 weeks, Rexha made history breaking the record for a female-led song – a spot formerly held by Taylor Swift (“We Are Never Ever Getting Back Together”) and Connie Smith (“Once A Day”). It peaked at #2 after 50 weeks moving far beyond its initial record. Despite the song’s popularity, Rexha was surprised by how it took off. “I didn’t see ‘Meant To Be’ having the success it did,” she admits. “I know it was a special song, but I didn’t think it would be that big.”

“Meant To Be” challenged any preconceived notions about Rexha when it comes to making pop music and what genres she would excel in: “I would do country or jazz, it all depends on where I’m at, what’s inspiring me and how I’m feeling in the moment.”

“Meant To Be” wasn’t Rexha’s first hit, but it was arguably her biggest. In 2014, she dropped her debut single “I Can’t Stop Drinking About You,” along with “I’m Gonna Show You Crazy.” But her breakthrough single wouldn’t come until her 2015 collaboration with G-Eazy, “Me, Myself & I,” which would lead to her charming dance-pop anthem with Martin Garrix, “In the Name of Love.”

Equally, Rexha expanded her profile with features on Cash Cash’s “Take Me Home” (2013), David Guetta’s “Hey Mama” with Nicki Minaj and Afrojack (2015) and “Back to You” with former One Direction member, Louis Tomlinson (2017).

However, despite Rexha’s slew of hits, her journey to becoming a pop star was filled with career pivots and false starts. The Brooklyn-born, Staten Island-raised singer grew up immersed in music as a self-taught pianist and guitarist who sang in her high school choir. During her teenage years, she submitted a song to the National Academy of Recording Arts & Sciences’ annual “Grammy Day” where it would be performed if selected. Rexha’s song was subsequently chosen, winning the “Best Teen Songwriter” award. Soon after, she began taking songwriting classes.

But it wasn’t until 2010 when Rexha would first pursue her career as an artist with Pete Wentz’s electropop project Black Cards, releasing a slew of singles and touring until 2012 before pursuing other projects. By 2013, she signed as a solo artist to Warner Bros. Records, songwriting for other artists, penning tracks including Selena Gomez’s “Like a Champion,” Tinashe’s “All Hands on Deck,” Nick Jonas’ “Under You” and Eminem and Rihanna’s smash hit “The Monster.”

While songwriting, Rexha parlayed her talents into building her own solo career. But it’s been a long road for her, especially when it comes to putting out a solo record. “I remember when I first moved to Los Angeles and everybody was like ‘you should just go home this isn’t going to work for you,’” she recalls.

When she began releasing songs with other artists, she’d receive criticism that she was just “a featured artist collaborating” and that she’d never be anything more than that. But “Meant To Be” revealed Rexha’s inherent talent, proving she could do whatever she wanted. Now she’s doling out advice to other songwriters who want to pursue singing careers: “It’s always a journey, and if you’re a songwriter and you consider yourself an artist, then you should just put songs out and not give up. People are always gonna have an opinion and put you in a box.”

Instead, Rexha constantly challenges herself in her personal and creative work. “I’m always trying to push myself to be the best I can be,” she explains. “It’s [about] always going in that way and never letting things slow you down.” For Rexha, creative control is everything because she’s the one who has to answer for her work at the end of the day. In some cases, it may have cost her opportunities to work with important people, but it doesn’t matter to her.

“If I were ever put in a situation where I felt like I didn’t have creative control, then I just left no matter how big the person was,” she says firmly. Rexha knows that it will never be people calling out her and her managers and label if she wore an ugly outfit or did something “crazy”: she’ll have to answer for it herself.

“If I’m in a situation where there’s no collaborative effort and someone tells me what to do, I’m out,” she says doubling down. “I’ve been in really weird situations where I’ve looked like an idiot having walked away from a really big producer because I wouldn’t have them tell me who I need to be.” At the time it was terrifying for her because she was told she had “fucked her whole career and it was “the stupidest thing” she’d ever done. Looking back, she has no regrets. “Now I feel so glad I was strong and a little cunty,” she says with a biting smile through the phone.

Rexha’s instincts were right: her debut album Expectations finally surfaced this year following three EPs. It did, perhaps, take a bit longer than anticipated for it to happen, but for Rexha the timing was right. “I think Expectations [the album] itself just fell into place naturally, but the journey of getting there was really long,” says Rexha. “You need to know who you are, build your artistry and build your craft as an artist.”

For Rexha it was important for her to create all her content; everything she touched needed to be authentic. Instead, Rexha proved she could deliver stunning power ballads (“Grace” and “Pillow”) and cinematic anthems (“Ferrari”) all-together. Still, Rexha’s candor about her flaws pours out into the album’s 14 tracks.

“I never want to have anything written for me or any treatments written for me or be told what to wear or what to,” she says firmly. More importantly, making music for her has never been about fame. “I wanted to be creative but also say something – not just be creative to be famous,” she adds. The journey of making Expectations allowed Rexha to really discover herself. With the extra time, she had more stories and perspective, so, in a sense, the album “wrote itself.”

On the surface, Expectations was sad for Rexha, but it wasn’t as simple as one emotion. “I’m really an insightful person,” she says. “I like sitting down and asking questions about why people feel a certain way, why we’re on this earth and what our purposes are. It’s not me being sad, it’s me being real.” Part of that is being honest to a fault with herself. Acknowledging that fairy tales and Santa Claus aren’t real and that the world looks like a different place when you go through hardships. 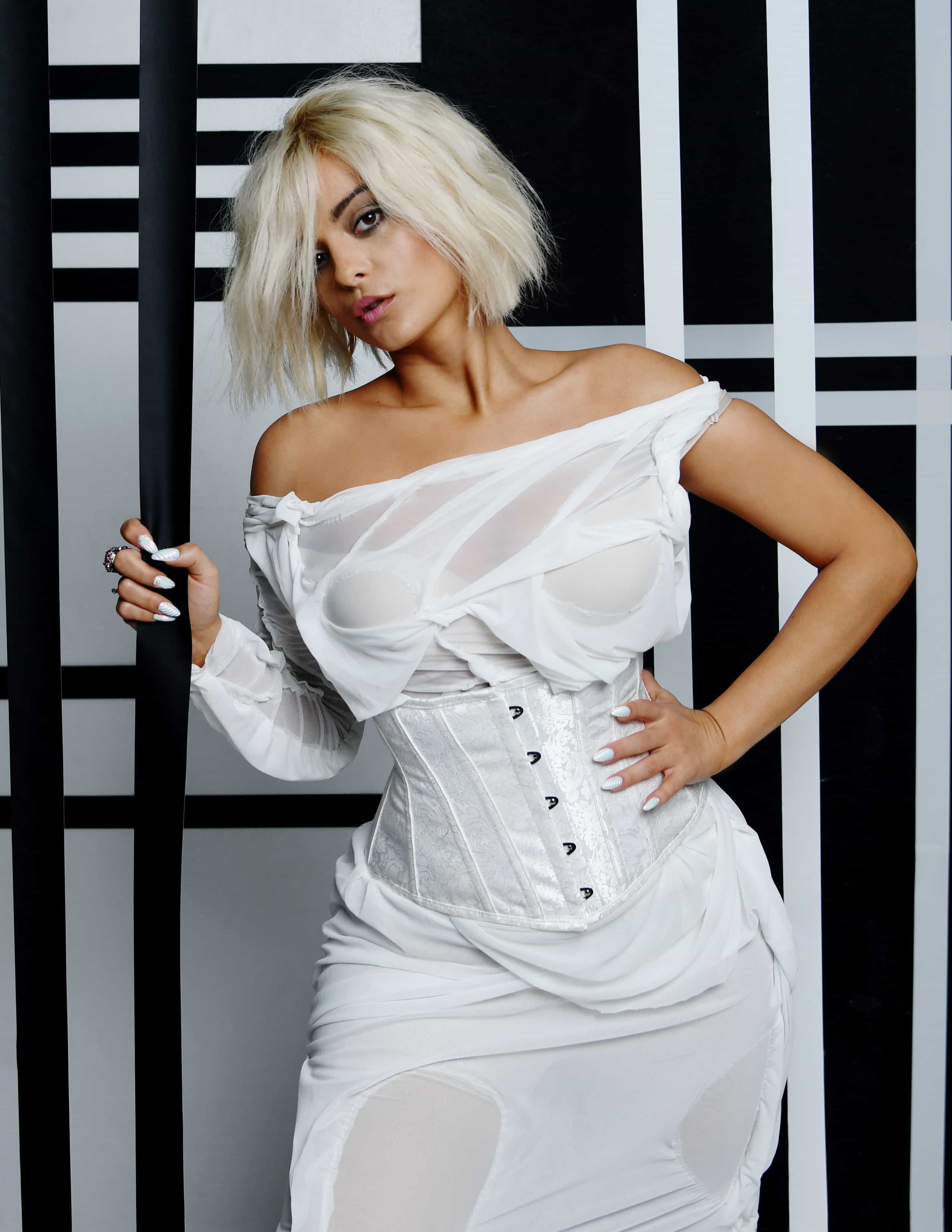 “I think it’s growing up, being an adult and learning about the world,” she says of the album. “For a second I looked at it as sad, but then I looked at it as a beautiful thing.” While Rexha breaks down these harsh realities, she knows that some people aren’t comfortable going there. But she isn’t afraid to. Perhaps it’s Rexha’s empowered self-awareness that has caused her songwriting to resonate, but her penchant for oversharing has become a mainstay of her work. Rexha focuses on the ups and downs in life, whether that means celebrating moments or leaning into blissful avoidance.

And that honesty is something she’s proud of. “Life wouldn’t be interesting if it were rainbows, cotton candy, and sunshine every day. You wouldn’t know what the sun felt like. You have to have the highs, the lows and the contrasts of life,” she says. Because Rexha doesn’t shy away from being realistic, fans can relate to her music and feel less alone.

Empowerment seems to be on Rexha’s radar. With Expectations out of Rexha’s queue, she’s been in the studio a lot, and she’s been thinking about what she wants to really do with her music. “I’ve been feeling very inspired. I’ve been feeling really strong and anthemic. I just want to empower people to take everything they’ve gone through and flip it into a positive,” she explains.

She’s been so inspired by some of the incredible people she’s met that have gone through the hardest circumstances, but you wouldn’t know it. “That taught me that shitty things make you stronger,” she says candidly. It’s why her unabashed honesty resonates in her own music. Not so candidly, when asked about whether or not she has a release date for her next batch of songs she plays coy. “Maybe I do, maybe I don’t,” she muses.

But she does reveal that she’s been really focused on determining who she wants to be in the studio with for her latest steps, but maintains it’s “very baby steps.”

“Right now it’s me in the studio with a guitar and people I feel very comfortable with – the guitar, the piano and the producers and [then] we expand,” she says. When she’s halfway through this process, she’ll determine the sound and the theme of her project, but for now, she’s immersed in production and working with up-and-coming songwriters. Even with cha rt-breaking records, Rexha still sees herself as a pop outsider. “I never really feel like I fit in,” she says. “I feel like I live in my own word.” So far, she’s been successful at avoiding being boxed in.

“I respect P!nk because she said what she needed to say and say fuck you to all the record label people at the time and that’s something you do not do,” says Rexha. With her music and position in the industry, she wants to be a catalyst for change in the future. “There are women who have inspired me and inspired me to be in the pop world and that’s the reason I’m here for today,” says Rexha. “I feel like I’m paving the way for my own world.” 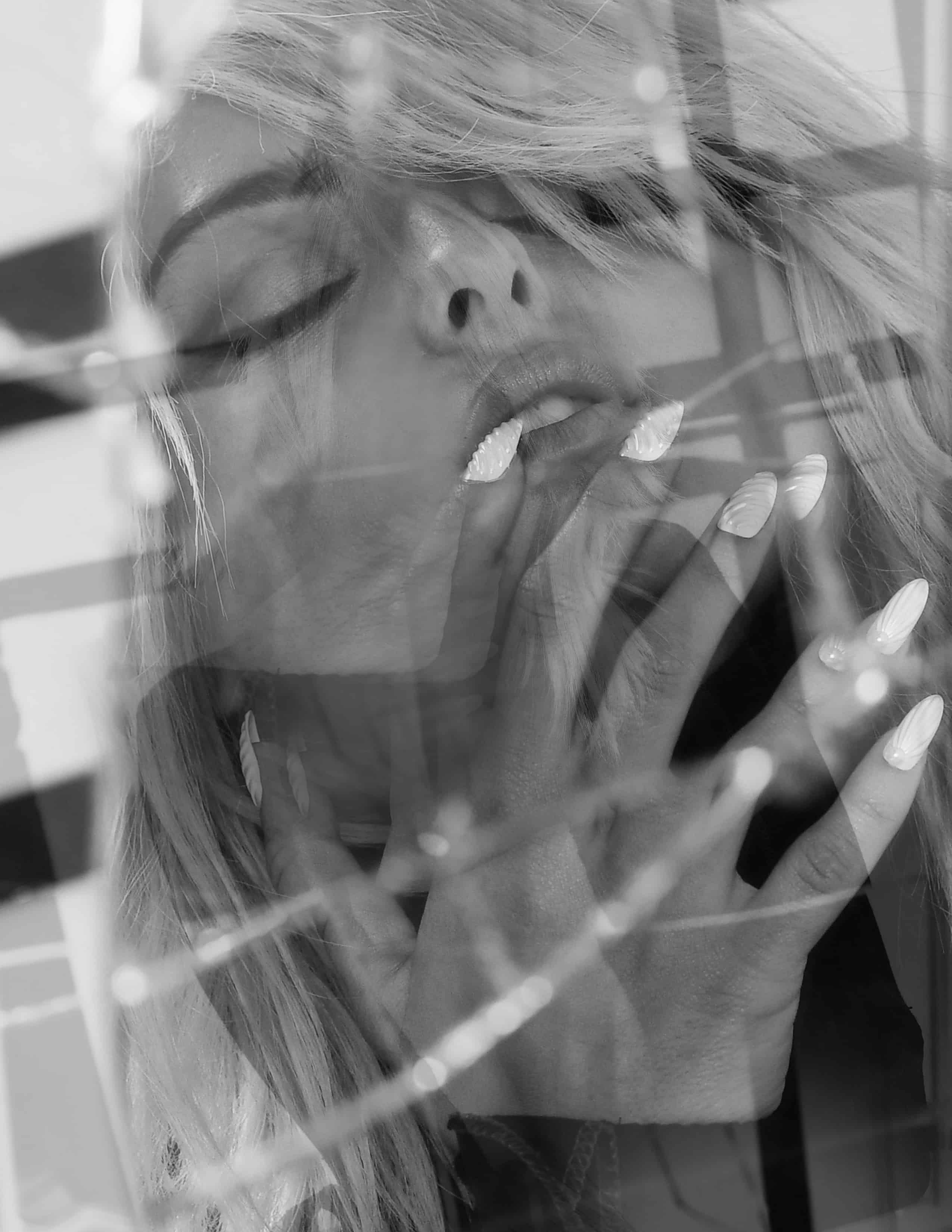