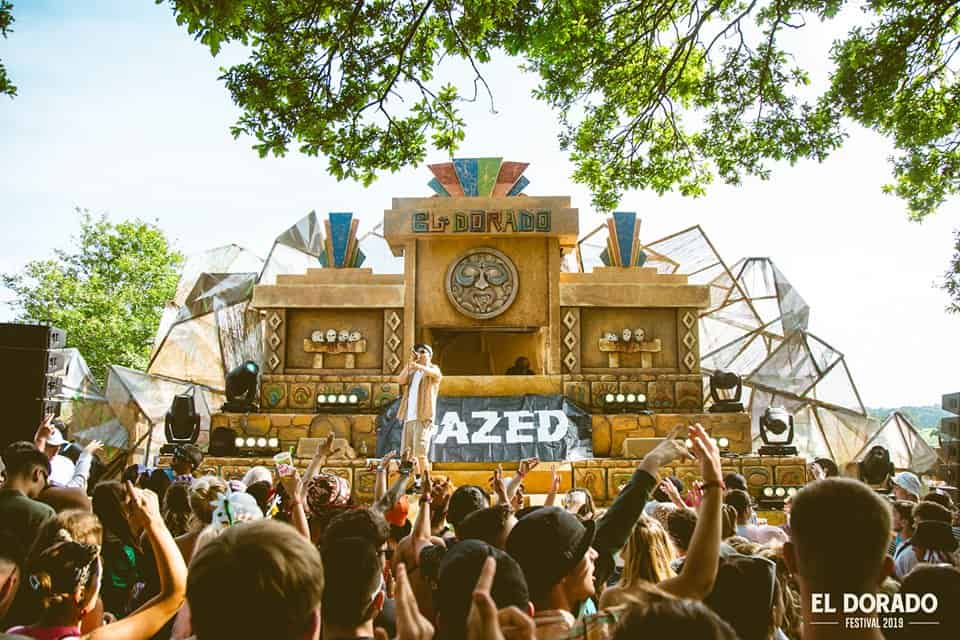 The Road to El Dorado

There’s always a lot to talk about when you leave a festival. How was the food? Who went? And increasingly important, who played and what was the sound like? The same is true of El Dorado, this small, yet charming festival hidden in the vicinity of Herefordshire.

For something so small, it packs a lot of punch. Seemingly taking a lot of inspiration from Secret Garden Party, (including a floating stage) the site is full of wonderful things to see, eat, drink and explore.

That being said, at some points, it does miss the mark. For one, the signal is terrible. The sheer size of the site is tiny in comparison to the number of areas, and it can feel like they’ve tried to fit too many stages in a place where you just don’t need it. Also, with the number of 18-year-olds who seem to want to ‘go mental’ for their second visit to their first festival, and the surprisingly high number of fence jumpers the security is – somewhat understandably – rigid and on many occasions quite rude. But it’s not all rain. These are EUPHORIA’s best bits.

Bingo at the Big Top

Although Shy FX tore up the stage on Friday evening, Bingo Lingo was probably the best thing we saw in the Big Top. Packed out in the early afternoon, this new and exciting breed of bingo swept up a large majority of the El Dorado crowd. Not only were the prizes amazingly awful (think mermaid costumes and over-giant inflatable unicorns) which they got participants to complete challenges and performances to win, they also seemed to possess the energy of the sun as they willed hungover festival-goers into having pure silly fun.

Space Ghetto in the Boudoir

One of the great things about the smallness of the festival is being able to stumble onto small acts tearing up the stage, and Space Ghetto did that in the Boudoir. Taking a break from the Drum and Bass that seemed to be everywhere, we were lulled into the tent by sounds of D’Angelo’s Brown Sugar. Entering, we found people crammed up against a tiny stage, singing along to a band with a full brass band and at least three soul singers who possessed whatever ‘it’ was. A highlight for sure.

El Dorado certainly impressed with the Line-Up, with Kool & The Gang bringing the Jungle Boogie to the (main) Garden Stage on Sunday. But also touching feet on the stage were some amazing acts, both new and established. Brighton rapper Ocean Wisdom stole Friday, whilst Romare kept the crowds on Saturday, as well as two pioneers of the rising Hip Hop/ Jazz scene Children of Zeus and Quiet Man. If they’re not already on your playlists, they should be.

As previously mentioned, Drum and Bass was truly everywhere, and not just following in the footsteps of Shy FX in the Cirque De Soul Bog Top. Both a blessing and a curse, it seeped into every stage, from El Paradisco to a fully-fledged takeover in the hidden woodland stage The Nest. Just be warned.

The Slip and Slide by the Provibers

In fact, if there is one thing the festival should be known for, it’s its use of pure silly fun. Alongside the fun and games of the Funhouse, everyone’s favourite positive movement and provider of vibes, The Provibers helped festival-goers cool down significantly on the Sunday with a Slip and Slide. Cue scenes of a hot, wet summer.

Bring that back, it saved us on Saturday…

All in all, the small El Dorado made for a delicious weekend of fun, games and really good music. We can’t wait to see what they do next year.