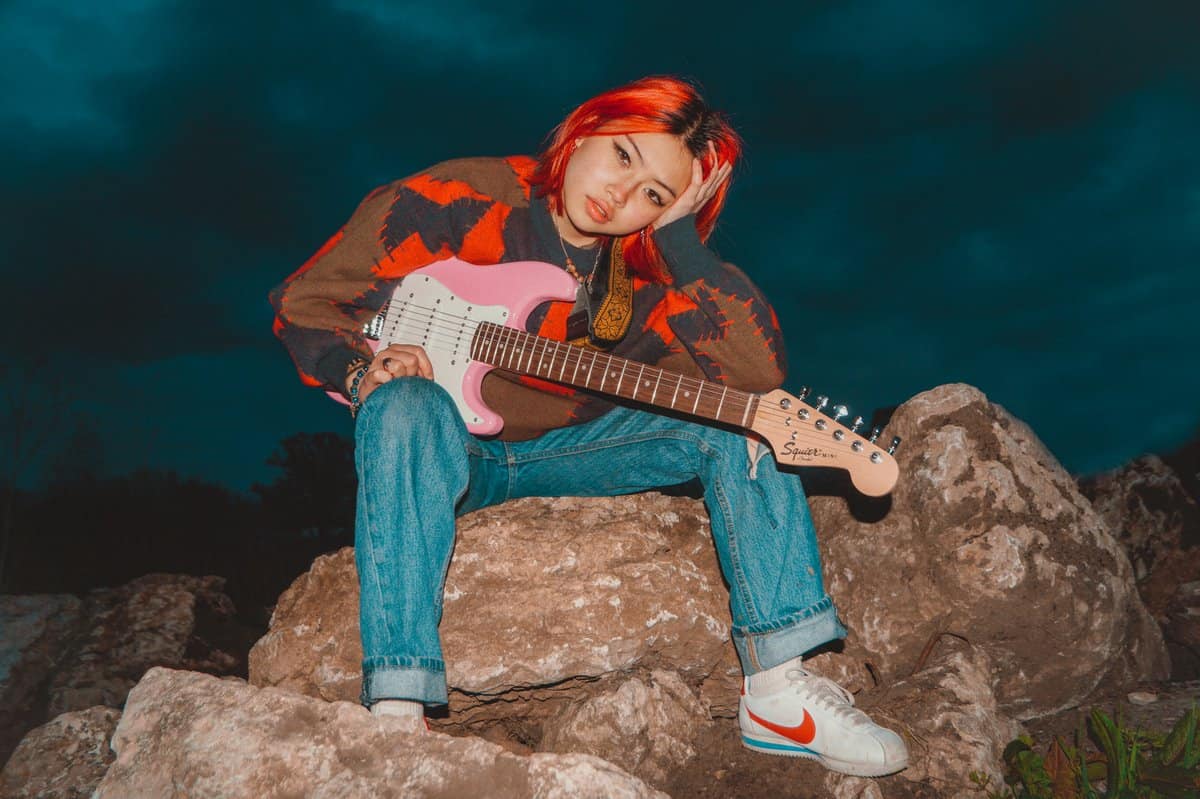 On the evening of April 25th, in the depths of Instagram, we find user @radvxz live-streaming with a friend and eating pizza.

To the average Insta account holder, it’s just another teenage girl messing about online with a jumble of letters as their Internet identifier. To her growing following, it’s Beabadoobee, getting nervously excited for her 7-track EP titled Loveworm to be released the next day.

Beabadoobee is known IRL as 18-year-old Filipino-Brit Bea Kristi, although her stage name is a much better representation of the singer-songwriters carefree approach to lyrics, vocals, instruments, album covers and social media presence.

Bea is both effortlessly adorable and socially cool, somehow combining exuberance with nonchalance. Loveworm vibes with gardens, trendy cafes, childhood homes, dinner parties and the seaside. She embraces youthfulness and her teenage romance with boyfriend Soren, and decorates it with foolish humour, soft acoustics and cheeky cuss words.

Bea is signed to Dirty Hit – the same label as The 1975, Wolf Alice, The Japanese House, Benjamin Francis Leftwich, and other big names making waves both in the UK music scene and abroad. The singer-songwriter released her debut EP Patched Up in early December last year, with the recent Loveworm following only 5 months later. This quick turnover gives her fast-growing fan base what they want and need, with the artist already showing progression and growth albeit the short time frame.

Patched Up, as well as her earlier singles, are evidently soft and hazy, with Loveworm carrying the same intimacy but on a slightly more upbeat scale. A little less bedroom recording for YouTube and a little more established artist in the studio, playing with some more instruments and sound effects. But, of course, still with the DIY sense of notebook scribbled lyrics and chords that garnered the original attention from her followers and management.

“Disappear” is reminiscent of a summer evening. “Apple Cider” is playful and sweet. “Angel” has an edge. “You Lie All The Time” is fun to get ready for the day to, “Soren” is nice to wind down to, “Ceilings” and “1999” are nice to sleep to.

Loveworm is a soundtrack for feelings that are messy and teenage yet deserve to be solidified, and that’s exactly what Bea is doing. Although still in school and refusing to be super clear-headed, she is front and centre of her team, and it’s a working tactic.

The future is bright for Beabadoobee.