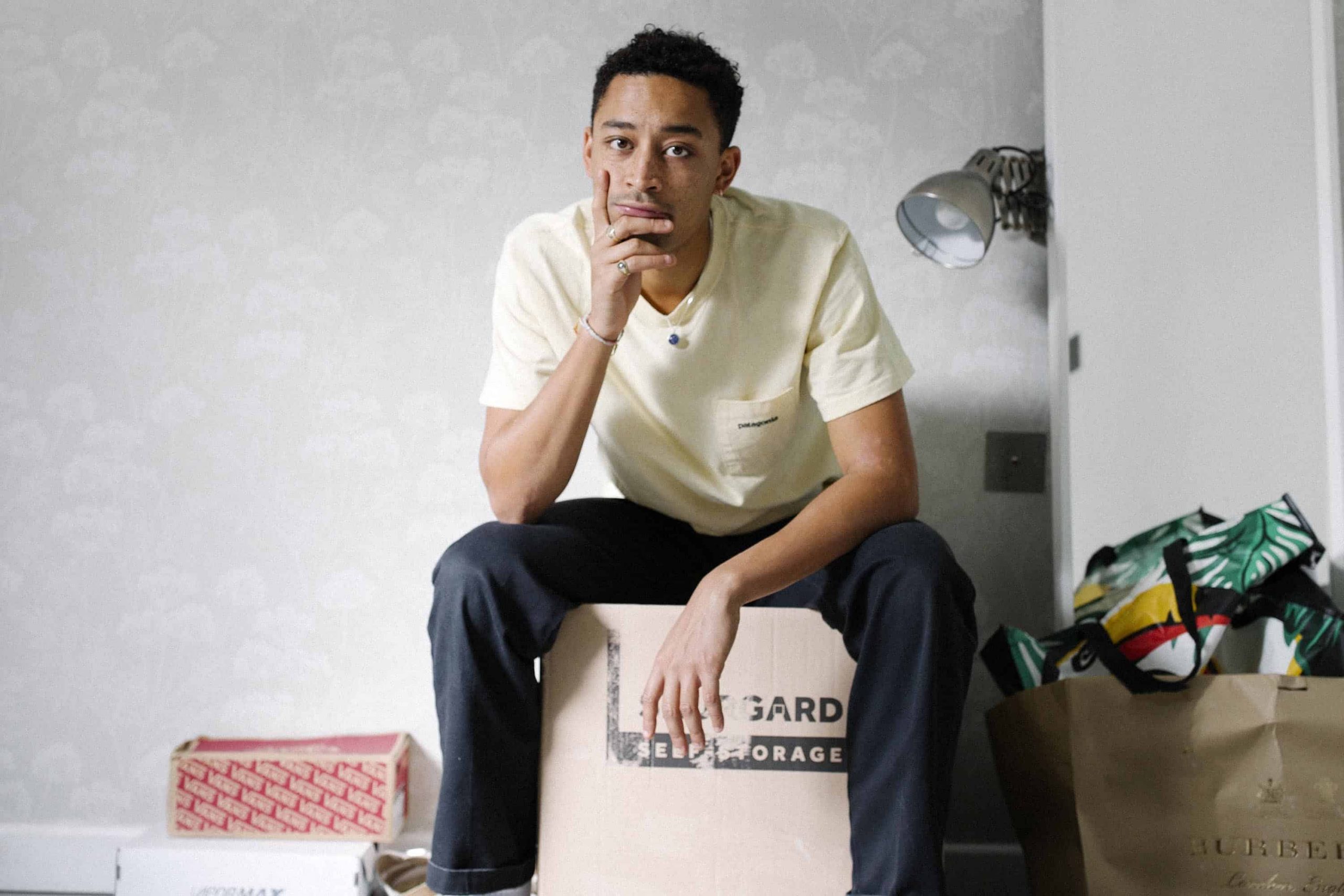 Fresh off the back of his sophomore album release, Not Waving, But Drowning, Loyle Carner’s sold out show at the Roundhouse in London was something to be remembered. Not only did the South London rapper bring out a plethora of special guests – everyone from Tom Misch and Sampha to Rebel Kleff and Jordan Rakei – but everything from the set design to the energy of both Carner and the crowd was incredible. Plus, he knows how to give the people what they want, as Carner played a mix of old and new bangers from his two albums.

Despite being a packed-out gig, the show still felt intimate. This feeling was created from the get-go, as the curtain fell to reveal a welcoming, homely living room set, complete with armchairs, rugs and lamps. But it was also in the way Carner spoke to the audience, telling stories in between songs and joking around with his friends on stage.

Carner jumped into action with “Ice Water”, a track off his new album that tells the story of how he met his current girlfriend, complete with a thumping bass to get the crowd riled up. “Feel this!” he calls as he leads into another of his new songs, “You Don’t Know”, on which his friend and collaborator, Rebel Kleff, joins in.

It’s after this that Carner takes the chance to thank the crowd for their support and takes off his hoodie to reveal a football shirt personalised with ‘CARNER’ on the back. The rapper’s love of football is something he regularly posts about on social media and trades vintage football shirts from around the world with fans in exchange for tickets to his concerts. On stage, he even has three framed football shirts hanging in the ‘living room’. Coincidentally, the London gig falls on the same night as the Liverpool vs Barcelona Premier League game, so at one point, Carner (an avid Liverpool fan) asks his crew to check the score for him, which he shares with the crowd, to cheers.

Loyle Carner delights the crowd when he plays a throwback track from his first album, Yesterday’s Gone, the high-energy “Stars & Shards”. Everyone goes wild when he casually asks, “Is it cool if I bring out a friend of mine?” Fellow South Londoner Tom Misch then joins Carner on stage to play “Angel” – a lead track from Not Waving, But Drowning. The pair then treats us to another of their collabs, “Damselfly”, from Carner’s previous album.

The mood then shifts to be more candid, as Carner performs another throwback, “Florence”, a song he says he wrote at a time when he and his mum were feeling down, and the only thing that kept him going was the thought of having a little sister. He then takes a seat in the armchair and flows into “Dear Jean”, a beautiful song dedicated to his mum.

The guests didn’t stop at Tom Misch, as Sampha then comes on stage and sits at the piano to play “Desoleil (Brilliant Corners)”.

“I was not ready for this. Thank you so fucking much,” Carner reflects. “I always get scared when I come back to London because this is where I’m from and I want to represent you lot.” He then goes on to explain the meaning behind his song “Looking Back”. Having grown up thinking he had a heritage in Ghana, the rapper then felt lost when he discovered it was actually Guyana. Produced by Misch, it’s one of the standout tracks from the new album. He gets emotional at the end but after a moment, seems to gather himself and declare, “Enough of this sad shit. Is it cool if I play another song?”

Fan favourite, “Ottolenghi”, starts up and Jordan Rakei joins Carner on stage. The next song, “No CD” fires up the crowd to get everyone jumping. Whilst many of Carner’s tracks take a slower pace, you can feel the bass on this song in your heart and veins. Continuing the energy, the South London star then performs “Ain’t Nothing Changed”. His energy is infectious; the smile on his face is mirrored on every person in the room.

“Is it cool if I give you a poem quickly?” Carner asks the crowd, before reciting a few verses beautifully. The crowd is gripped as Carner proves even further that he has a magical way with words. Then, the most touching moment happens as Carner’s mum, Jean, comes on stage to read the heartfelt poem she wrote for her son, “Dear Ben”, which features on the second album. Carner sits at her feet adoringly, sipping a beer, then comes to stand behind her and listen, entranced like the rest of the crowd. Phones light up the room like stars in the night sky.

Big love to everyone who came through to the London show. I've been tryna get my Mum to speak some poetry ever since my first show at Birthdays. You could've heard a pin drop, i'll never forget it. pic.twitter.com/QJLq0r4HoC

The show ends fittingly with a rendition of “Loose Ends”, the track Carner created with Jorja Smith. Whilst the Brit songstress herself doesn’t come on stage, Carner and the audience mouth all the words for her.