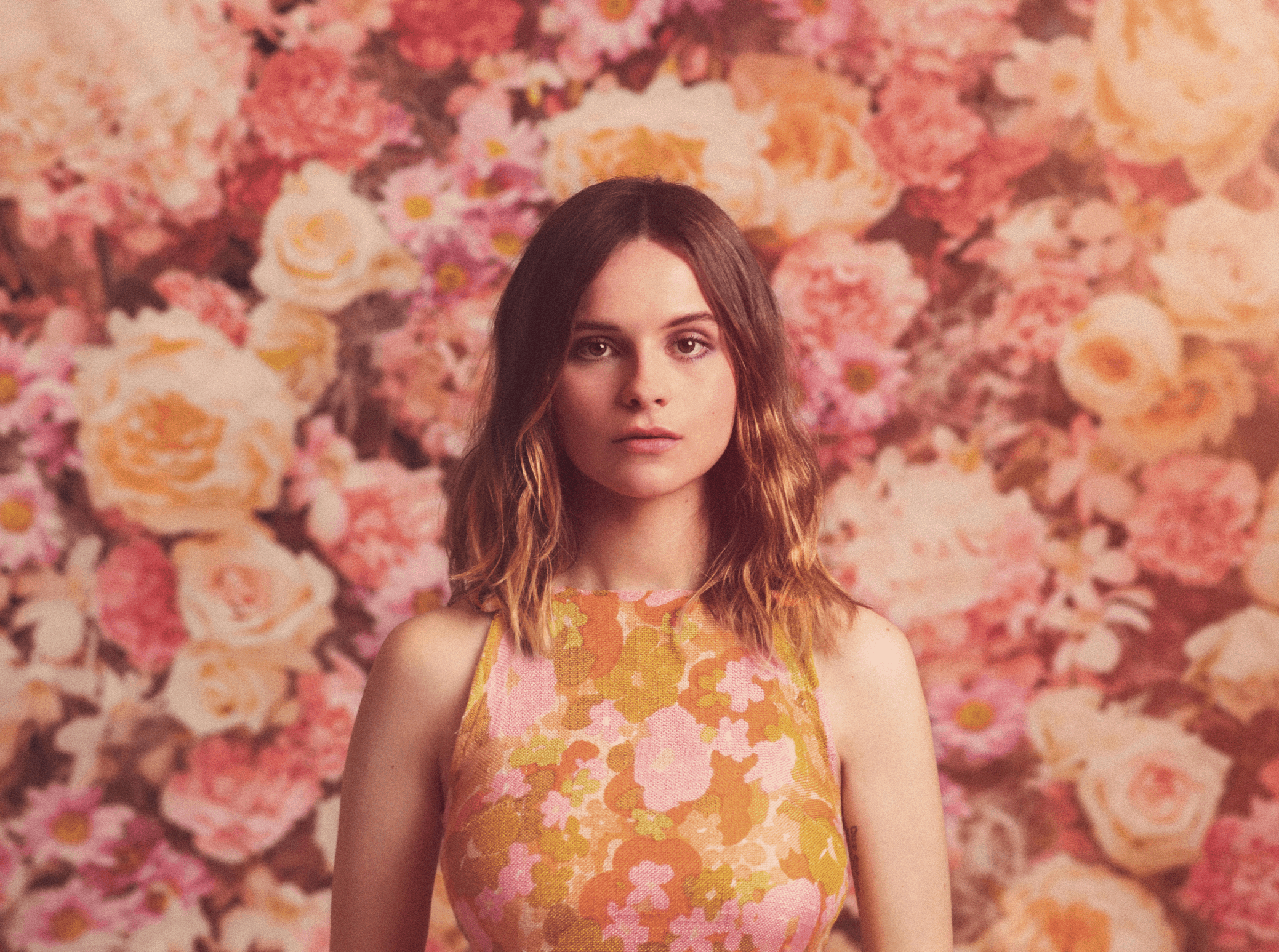 Life can sometimes be overwhelming. Reality can occasionally feel like a never-ending onslaught of things to do, leading to mind-boggling over-stimulation. With her latest single “Nothing Really Matters,” Gabrielle Aplin unburdens herself from the shackles of over-thinking, interweaving pitch-perfect, dazzlingly bright pop production with a life-affirming lyrical sentiment.

Throughout her career, Gabrielle has continually evolved her singular sound but at the heart of all her work is ardently affecting lyricism that feels personal yet accessible. Whether her vocals are soaring on a beautiful piano-driven ballad, like on the awe-inspiring affecting “My Mistake”, or she’s ruminatively reflecting on heartache, as she does on 2015’s “Hurt”, her style always remains delightfully distinct and unpretentious.

We caught up with Gabrielle on her latest track, “Nothing Really Matters,” her creative process, and the Never Fade community.

I love “Nothing Really Matters,” it’s such an upbeat summery song with such a great message. How were you inspired to write the song?

You know, it kind of came from a darker place than it sounds, as always (laughs). I think it was like last year when there was that heatwave that went on and on for ages and it kind of felt started to feel like the apocalypse. Like it started off great and then we realized football wasn’t coming home (laughs).

But I went up to London, I was working with my friend Oliva, who I wrote the song with, and a guy who’s in a group called Ritual. It was one of those days when it was like the apocalypse and obviously, I was completely overreacting. It just one of those days where it was like Brexit, Trump, global warming, and everything and I was like Jesus, all I want to do is go home and walk my dogs in a sunny field, that’s literally all that matters right now.

It’s just about everything in life is too much and obviously, all those things matter but at that moment for my own happiness, none of that stuff mattered. It’s basically a song about saying fuck it and just focusing on what you want.

All of those things are important, but I think it’s easy to put them all on you so it’s about letting go.

Do you find that sort of easy thing to do?

I don’t find it easy but that why I write songs about it. I just wanted to write something happy and free. It’s kind of hard because I wish I could write a whole essay about what the song is about but it’s more of a feeling. But yeah, sometimes I find it easy and sometimes I don’t.

Your 2016 release “Miss You” sonically represented a big shift in your sound. Were you ever apprehensive or nervous about releasing it?

It was so strange because that was kind of the first real-time of like not really knowing what’s right. It was a big transition as well. I stopped working with Warner, I got dropped by my publisher too and that was quite unexpected because they were making money from my songs. So I was kind of expecting to be dropped from my label but not publishing.

But yeah, my publisher dropped me, and I guess that kind of made me feel like I wasn’t a very good songwriter. I guess that’s why I couldn’t really write anything for ages, I was having a bit of an identity crisis as well.

Then I wrote “Miss You” with my friend Liz, and it just suddenly made sense. We went to a producer called Mike Spencer, who I’ve worked with a lot and that’s how I know Liz, and we went to his studio which is in this lovely farm in the middle of nowhere. We were just kind of playing around with production and Mike’s like this is how this song should sound.

I was slightly nervous about how it would be received but it was just really exciting. It was really nice actually that my fans, on a whole, heard it and it wasn’t like, “Ohh that sounds different,” in a bad way, it was just accepted. It felt like a part of my development and it kind of wasn’t like Ohh I’ve gone pop. Like I might make an acoustic album next. I just don’t want to feel like I’m tied to one sound or one thing because I’d just get really bored.

When I first heard “Miss You,” I thought it was about someone else then I read that it was actually about rediscovering your former self and I like that message a lot more! Do you ever find it surreal to think about the deep connection that your music has worldwide that’s so personal to them?

Yeah, I think that’s what’s amazing. I think I write for me, so I feel “Miss You” was about my little identity crisis that I had. But once I’ve released it, it’s not mine anymore and people can take from it what they want. I’m always still quite amazed by the fact that my fanbase is throughout the world. Like I have a fanbase in Japan, that’s mad. Or like people in Australia or Brazil or anywhere and I wonder what they take from it.

What’s your regular approach to songwriting and has the process changed over time?

The main thing that’s changed is that I’ve stopped trying to be cool. When I started working with a big label and a big publisher, I was shoved in all sorts of rooms with all sorts of people who’d worked on hits or whatever. But I didn’t really care, I just want to work with people who work well with me.

I love the whole Never Fade community. How important has that community been for as an artist?

It’s so important generally, there’s always been this kind of thing where everyone is out for themselves like you can’t support other artists if you’ve got a song coming out and more absolute bollocks.

While I do think the music industry is an amazing industry, whether it’s major labels or working independently unless your friends with an artist or someone there at major labels there isn’t really a community. Like everyone’s kind of in it for themselves and it’s quite individualistic. It’s so much more friendly if there’s more of a community and I don’t really see why everything is made out to be a competition.

The industry can take such a toll on our bodies, our brains, and our sense of purpose, having a community of artists supporting each other is really important.

“Nothing Really Matters” tackles just how stressful and overwhelming all the little things can be and how you lose sight of the important stuff. “My Mistake” delves into embracing your flaws and how sort of empowering and freeing that can be. Both songs are so honest and personal. Were you ever apprehensive about releasing tracks, considering they contain so much intimate emotion and brutal honesty?

Yeah, maybe. My first album wasn’t very personal at all really, I just kind of wrote about stuff I saw and that’s what I wanted to do as a songwriter. But I’ve kind of realized, through my sort of identity crisis, that the songs that I wrote that weren’t about me were just not as good.

Has your relationship with performing some of your older songs changed and evolved since you started?

Yeah, I guess so. There was a stage where I was like oh my god, do I have to sing these songs, this isn’t me anymore. But I kind of got over it. I feel like they are my songs, I’m very grateful for them. They’re a moment in time and they’re part of my history.

What’s great about playing acoustic nights and stuff is that they all sound like they’re coming from the same place. They’re all from different albums and I know all my albums are slightly different, especially with my new stuff now, but now it’s about finding a way to work them in the live set, just tinkering around and trying new things, which is pretty fun as well.

Lastly, what excites you the most about the new year, and the ways in which you can share your art with your audience?

I think it’s the freedom to be able to tailor how the music is produced. You don’t have to follow the same formula, it’s not two singles and an album like it always has been. Like Marina, with the Froot of the month thing that she did or Bruno Major and his song for every mood.

I think you can do want you want and that’s what’s so brilliant. I guess it’s that little challenge; like I’m still working out how my fans want to receive my music. I’m still trying to work it out really but it’s fun to know that there really are no rules anymore.