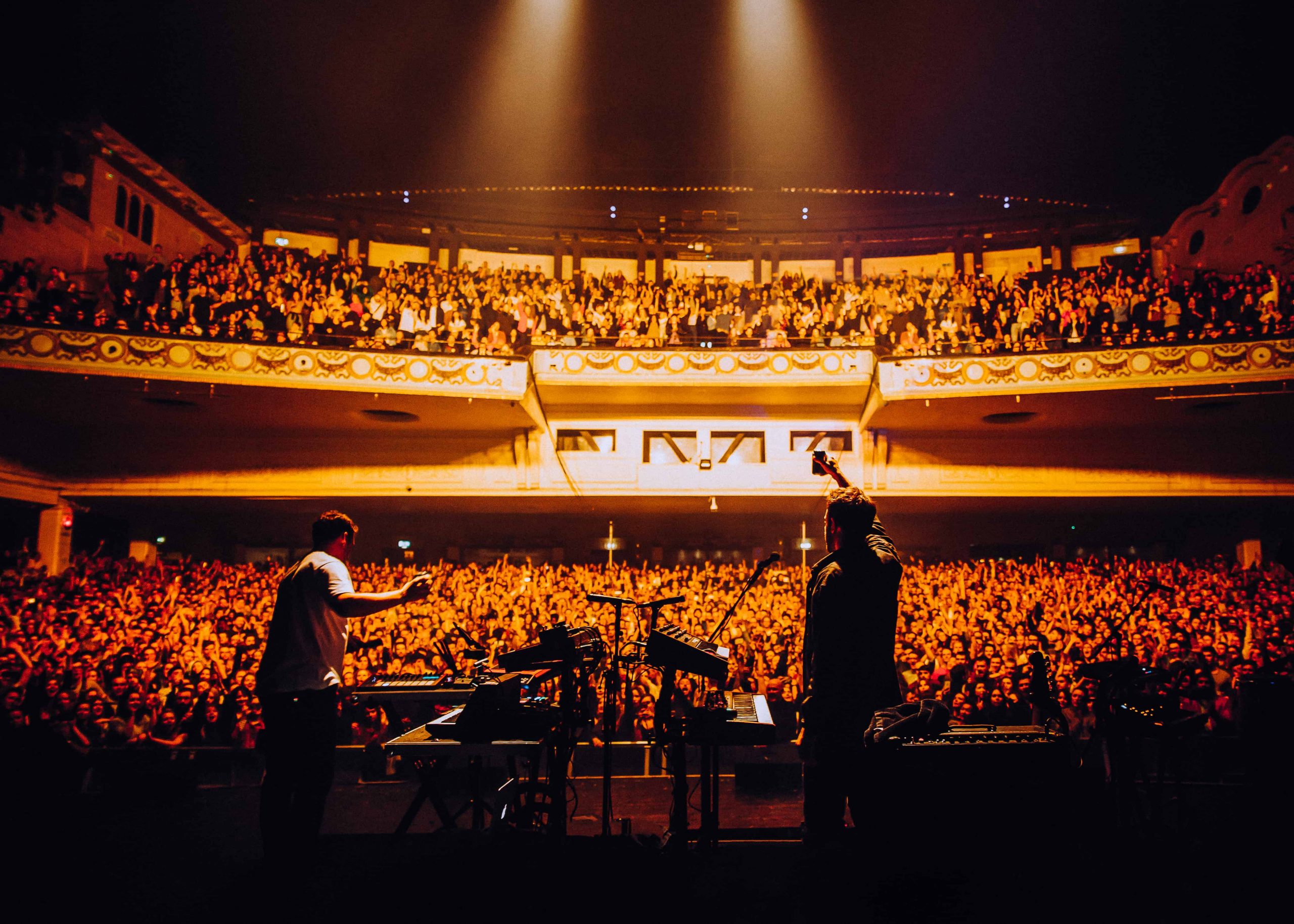 On Thursday 9th March, Maribou State, a duo known for their own brand of electric yet soulful tunes, returned from a US tour to play a sold-out show at the Brixton O2 Academy.  Simultaneously, the first time they played their new album, Kingdoms of Colour, to a UK audience.

Maribou State have been on the scene since 2011, releasing EPs, singles and remixes to a small, yet loyal fanbase. In 2015, when they released their debut album Portraits, their influence grew almost overnight. The duo had created a masterpiece of melodic, euphoric listening, the kind of music that makes you want to crawl into your headphones and leave your surroundings. With the release of Kingdoms of Colour in 2018, the expectation could have left a lot of room for want, but they managed to live up to the hype. A difficulty for any band whose fans are as far-reaching and diverse as Maribou States’ are. So when it was announced they would be bringing their newly formed five-piece band to play a headline show at the Brixton O2, fans were obviously thrilled.

With Jonny Cade on Drums, Jonjo Williams on Bass/Percussion and of course, Holly Walker, a constant contributor, lending her soulful vocals to the stage, their set up was to be spectacular. Opening the show with “Home”, the primary track on their first album, Liam Ivory and Chris Davids bounced off each other to bring the music to its full potential. Three tracks in they brought on Walker to sing “Steal”, largely considered a firm favourite, also bringing on a small string orchestra and a choir for the uplifting track “Glasshouses”, which could have been a firm closer, but instead was used to build the atmosphere in the middle. Nevertheless, they moved seamlessly through their setlist, elongating drops and doing their best to create a truly inescapable mood that is expected from their music.

Yet, the mood was somehow hard to grasp. Frequenters to the Brixton O2 Academy will know it’s hard for artists to always get it right. Though the steeped floor makes it easier for everyone to see, the high ceilings that would work wonders for an opera don’t always lend themselves so well to different kinds of music. The nature of Maribou State is headphone music. It needs to be listened to in a way where you can hear the complexities of layering and the delicate builds and drops. Through no fault of their own, the levels of sound that came from the band that night were just not cutting it. After bringing out North Downs for “Kingdoms”, the movement from “Wallflower” to “Vale” to “Midas”, which would see the return of Walker, felt like it was happening just that bit too far away and made it hard to truly enjoy.

Not to mention their growing fanbase meant that the crowd were largely made up of people who may like their music, but maybe not of live music in general. Seemingly more interested in talking to each other than listening to the music, most would have felt more comfortable at some sort of club rather than a headline show. The noisy buzz they were creating as well as barely moving cast a pretty dense shadow over the work the band was putting in. All three factors meant the show as a whole didn’t quite live up to it’s, potentially unfair, high expectations.

Nevertheless, reentering the stage with “Turnmills”, a single from their new album, for an encore, the sound and crowd redeemed themselves slightly by being both louder and quieter respectively. Blasting the delicious bass-heavy riff, the choir, orchestra and band working in harmony reminded everyone what they came for. A crowd-pleasing confetti canon also did its job to leave the room in high spirits.

That being said, Maribou State’s electronic masterpieces deserve to be appreciated in an environment that lets them thrive. Perhaps at 2 am in a tent at a festival or a venue that can correctly attribute each layer of sound. They are a force to be reckoned with. The incredibly talented duo have the ability to make people feel things through their music some artists can only dream of, but it was hard to feel the same, live.