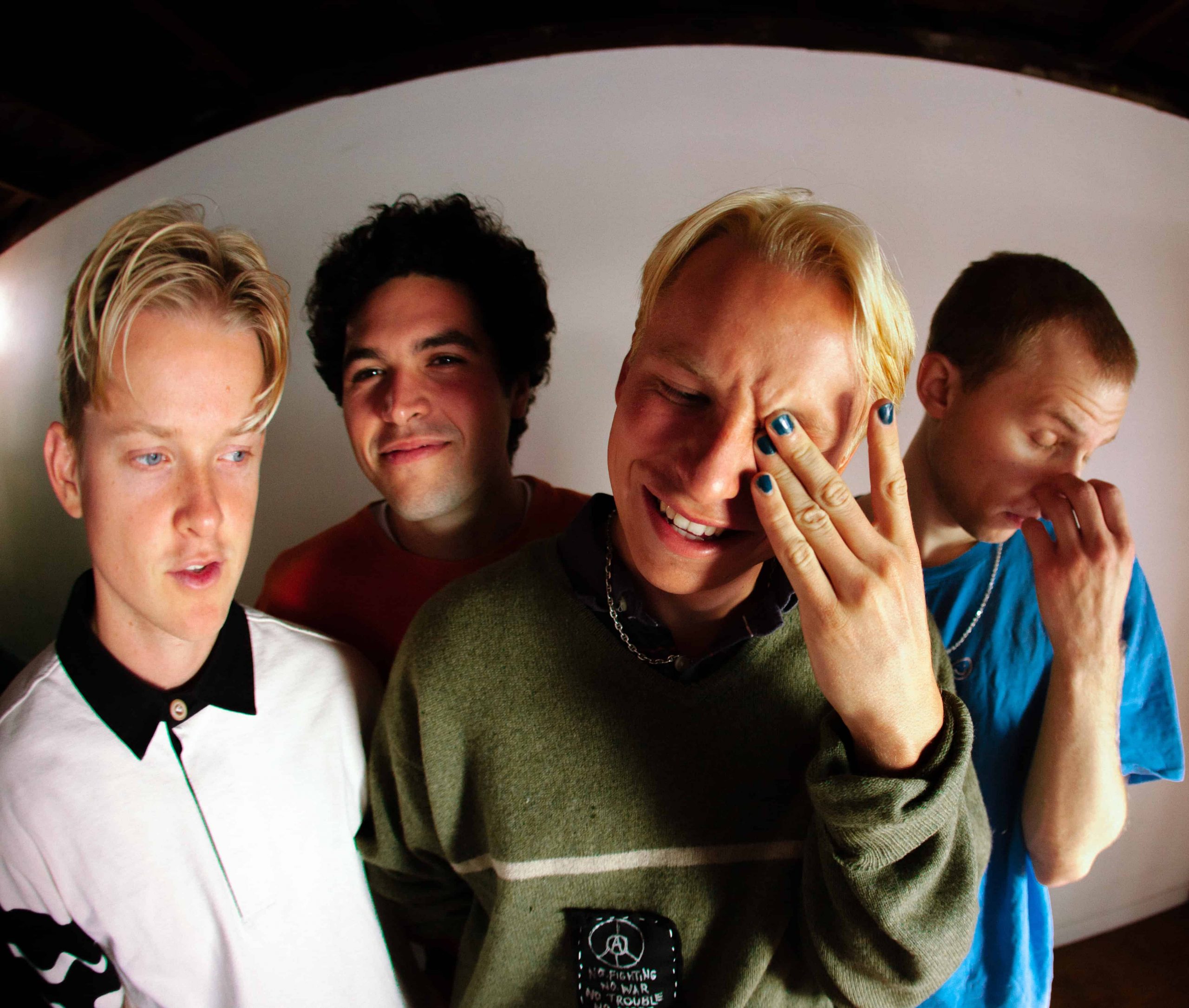 The last time I interviewed SWMRS was more than two years ago now. It was the beginning of March, freezing, with at least a foot of snow on the ground, and SWMRS, comprised of brothers Max and Cole, and Seb and Joey, had travelled from California to perform live in New York City, promoting their debut album Drive North.

I doubt that they remember anything about the interview, but I remember everything. As a college student, this was the biggest interview I had ever done, and it also included a photo shoot which I directed myself. No one knew at the time that SWMRS were about to become one of the biggest acts in the modern pop-punk music scene.

Now two years later, I was able to speak to Cole on the phone. It would be poetic to say that it felt like no time had passed, but that’s not true. Even without seeing him face to face, it’s obvious that Cole, among the other band members, has matured immensely in the passing years and that’s not surprising. Coming off their first big tour with their second album Berkley’s On Fire dropping this month there is a newfound sense of confidence and comfortability in the way they speak about their music and rapport. Thankfully though, SWMRS have lost none of their silliness, even if their less comfortable speaking about their love of pranks. Don’t worry, I still managed to get the scoop.

For your second album, it was your goal to come out with an entirely different sound. How did you go about doing this? Was it difficult to leave behind the familiarity of your original sound?
What’s cool is we kept venturing outward into new sonic territory but we would always come back to the things that deep down we really love about playing music and sometimes it’s like punk rock and it sounds like The Clash and sometimes it sounds like MIA because that was our favorite music when we were 12. What’s cool is we really were trying to expand our taste and it happened so naturally because in the past 3 years we have changed who we are as music listeners. Different things speak to us about music so these things naturally made it a very different album. That’s frustrating for some listeners but you can still hear us in it and it’s the same kind of energy we bring to the table.

After listening to the full-length album, it’s pretty exciting to deconstruct this sound. It comes across as a more modern version of punk. What do you think it is about punk and rock and roll that allows the sound to be able to change with the times and incorporate elements of popular music?
The reason we think punk is supposed to have a certain sound is because the mainstream it was reacting against when it first came out was big stadium rock and roll, and big disco. What’s so inspiring to us about punk is that it’s less about a sound and more about trying to make something real in this muck that we live in. There is a lot of good pop and rock music but there is so much fake shit. I think people really crave something real, especially now in the time where everything feels fake including the news. Everything is in this little silver box called a phone. Punk speaks to the strangeness of the time we are living in and speaks to the yearning we have for something authentic.

I saw the video for “Trashbag Baby.” What was the inspiration behind this ode to skate culture?
Gilly called me one day after we got the mixes of the album, and he had been listening to it one day while driving down Broadway in Oakland. He drove by the high school where there were so many teenagers skating out front, and he had watched them while listening to the sound and realized “oh this works really well.” He thought we should make a skate video. I’m friends with Cher, and we have been friends with Cher since we were young. Cher is one of the most visible trans skaters right now, and she’s done so much for the craft of skating, so we hit her up, and were like “want to make a skate video?” We watched a lot of 90s and 80s skate videos to take note of the pace and how they edited it. The music is so instrumental in the Mark Gonzalez videos so we realized skating and music are hand-in-hand and you don’t have to be a skater to love watching skateboarding while listening to a song.

A lot has happened in the last two years for you guys. You went on a European tour with All Time Low! What was it like to be part of such a high profile tour?
What was so cool was that there really are some things you can’t learn about being a musician until you experience it and to be playing in front of All Time Low’s massive crowd, we learned how to play to interact with a big audience of people in a big room and how sound works in that setting so that definitely informed our writing style because we were able to see what worked so well for all time ow and which of our songs worked so well in that setting so we were able to think back on what we wanted to do in the studio in order to make all of our songs function in a big room and a small room.

Any stories from that tour, embarrassing or otherwise?
The hard part about this is that I’m always the recipient of these stories! I kind of block it out. Somehow they all involve Seb being naked. He can’t help it, he was born at a Grateful Dead show, he’s a flower child.

What is the story with “IKEA Date”? You guys always have at least one song that comes across as an inside joke!
Max had a dream that he went on a date in IKEA. I remember there was one guy on Queer Eye who said their ideal date is walking around Wal-Mart. I can’t be judgemental about these things because in California just going on a walk is cool and interesting no matter where you go.

I have been very proud to see that the Boy In Tree Instagram has truly come into its own. How has Boy In Tree changed over the years?
We haven’t done as much of this in recent years but we actually did post something a little bit ago. It’s one of those things where when we started we were going out on the town a lot and Max would just go Boy in tree! And now we’re older and not going out as much so now when it happens its big time.

Last I spoke to you, you had a pretty in-depth history of pranking each other. What has been the biggest prank of the last two years?
One time we were driving in Canada in the dad heart of summer and there are so many bugs and our whole windshield is covered in dead bugs and there are no gas stations for miles and all of a sudden Seb just says “I’m going to shit my pants” and we pull over and he sprints off to the side but when he comes back there are bugs all over his backside and we had to help him get them off. This was just a crazy experience.

I’m sure you have all heard of the ‘sophomore slump’, how it so much more difficult to create a second album even than it is to craft a first, did you experience that at all?
What’s funny is that we left so much time in between that we were chomping at the bit to get in the studio by the time we had locked in when we were going to go. The reason people get into sophomore slumps is that they put too much expectation on themselves and don’t give themselves enough time to come up with something naturally but the band writes things when it feels natural and thankfully it felt natural the whole three years so we had so much to choose from and so much time to narrow down what we were trying to do. Drive North was such an accidental success so it opened up a lot of doors for us. Once we got into the studio again we knew we had to deliver on our end. It was scary because the sophomore slump is such a fabled thing and you hear stories of it becoming the best record like Weezer but everyone hates it when it comes out.

Last I interviewed you I asked what your band dynamic was like, Max told me that, “if we were to give each other titles, Joey would be the prankster, Cole would be the dumbass and Seb and I would be the quarterbacks.” Is that still true?
No, I think Max was on drugs or something when he said that. Joey is the prankster, but Seb is the hypochondriac. Max is the guy that you want to hate but then it turns out he is so nice and helpful that you just realize he isn’t a douchebag. I would be the weird aunt because I’m always hard to track down and doing some weird wizardry art stuff.