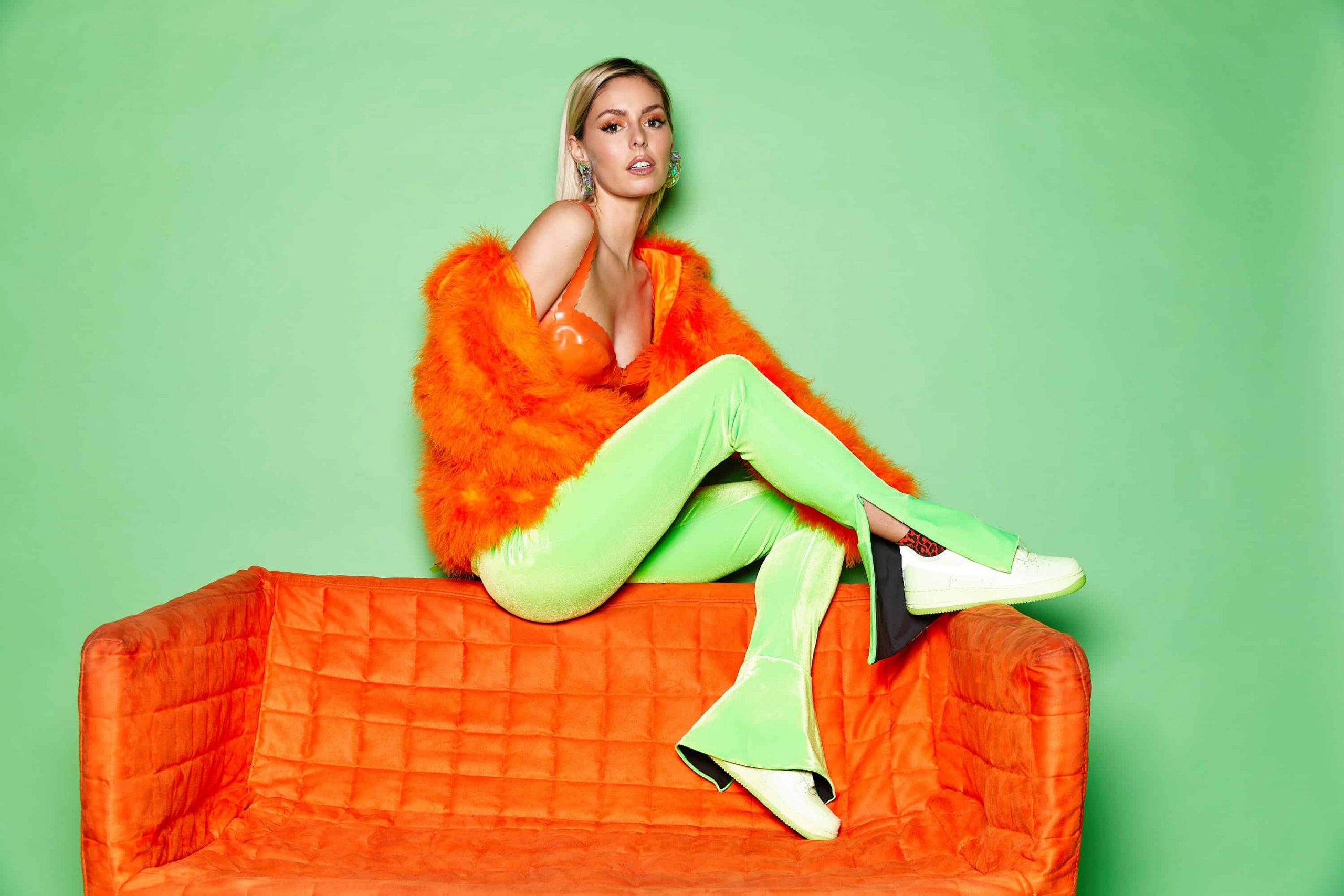 Described by The Times as a “fast rising starlet” and Wonderland as “One of the great new popstars”, Georgia Buchanan is starting to make her mark under the intriguing alias Call Me Loop. Her new single “Silly Boy” follows on from previous bangers that take a much more carefree approach to your typical pop romance playlisters. We caught up with Call Me Loop, or Loop for short, to chat about starting out as an artist, being invested in pop culture, and managing waves of anxiety.

What’s the story behind the name Call Me Loop?

My mum started calling me Loop when I was at school… Georgia became Georgie-Lou which became Loopy Lou which became Loop! I was initially putting songs out under Loop for a little bit but then it turns out there are quite a few Loops out there so I decided to make it that bit more unique. It’s a bit different for a solo female pop artist – I think some people think I’m a band when they see my name! – but I love it.

How did you get into music and kickstart your career? Is this something you’ve always wanted to do?

I’ve been writing songs and performing in school lunch breaks since I was like five. Honestly I never had a plan B. So after uni I just started focusing on music as much as I could alongside office jobs, cold-emailing producers for sessions, downloading Logic so I could start to (very very badly) produce the songs I was writing, putting together a band and getting some gigs in and networking. I met my label manager in 2016 and put out my first Loop record, “Looking At You”, and it’s been an amazing whirlwind ever since

Your latest track “Silly Boy” takes a much more fun and carefree approach to what sounds like a pretty annoying situation with, well, a silly, silly boy. What inspired you to take this angle? Was there something a bit funny about the situation?

I don’t think it was really a conscious choice when we started writing to be honest. I just started listing the little stupid things that had annoyed me about the situation and then we just landed on this ‘silly boy’ hook and it felt so great cos it just totally encapsulated my whole mood towards him. I wasn’t heartbroken you know, we’d only been dating a few months! So it wasn’t like I was really sad, I was just frustrated that he was cutting it off before it really had a chance to even be anything. To be fair to him though, we did both say at the start that it wasn’t ever gonna be anything proper, and we definitely weren’t right for each other, so he actually did me a solid.

Everyone seems to approach things differently, particularly songwriting. What is the creative process like for you?

It depends on the session, but for the most part, I go in with a fairly blank slate in my head and I’m really driven by how the track starts to unfold. A nice little beat will usually bring the sass out of me. The minute the track starts to fall into a particular kind of vibe then the melodies start to come and the lyrics with it. It’s not always in that order; every now and then I’ll have lyrics already in mind that I know I want to get in / base the concept around, but usually the lyrics come to me in the moment.

“Cry Like Kim K” and its single cover is, dare I say, iconic. What is your view of popular culture? Do you think young people are not taken seriously because of memes and things that older generations might not understand?

Haha, thank you! I do love that song, and I love pop culture! I’m a sucker for it. I think it’s really worthwhile to know what’s going on in that world, cos it’s so relevant to my music, my branding, my fans, my writing, everything, you know. You have to be in tune with what’s going on, what’s trending etc. But I do think it’s easy, and a bit dangerous, for a lot of people to get a bit too obsessed with that celebrity world… and the whole Insta-world, where people are comparing their lives and bodies to the Kardashians and ‘influencers’. It’s great to be aware of pop culture and enjoy it, but it’s so important to know how to still live your own life and be your true self. And I don’t think that it necessarily means that young people are being taken less seriously; memes are just kinda like the modern- day joke, you know. They’re fucking hilarious. They’re honestly the best way to convey a mood or a moment. I love them. 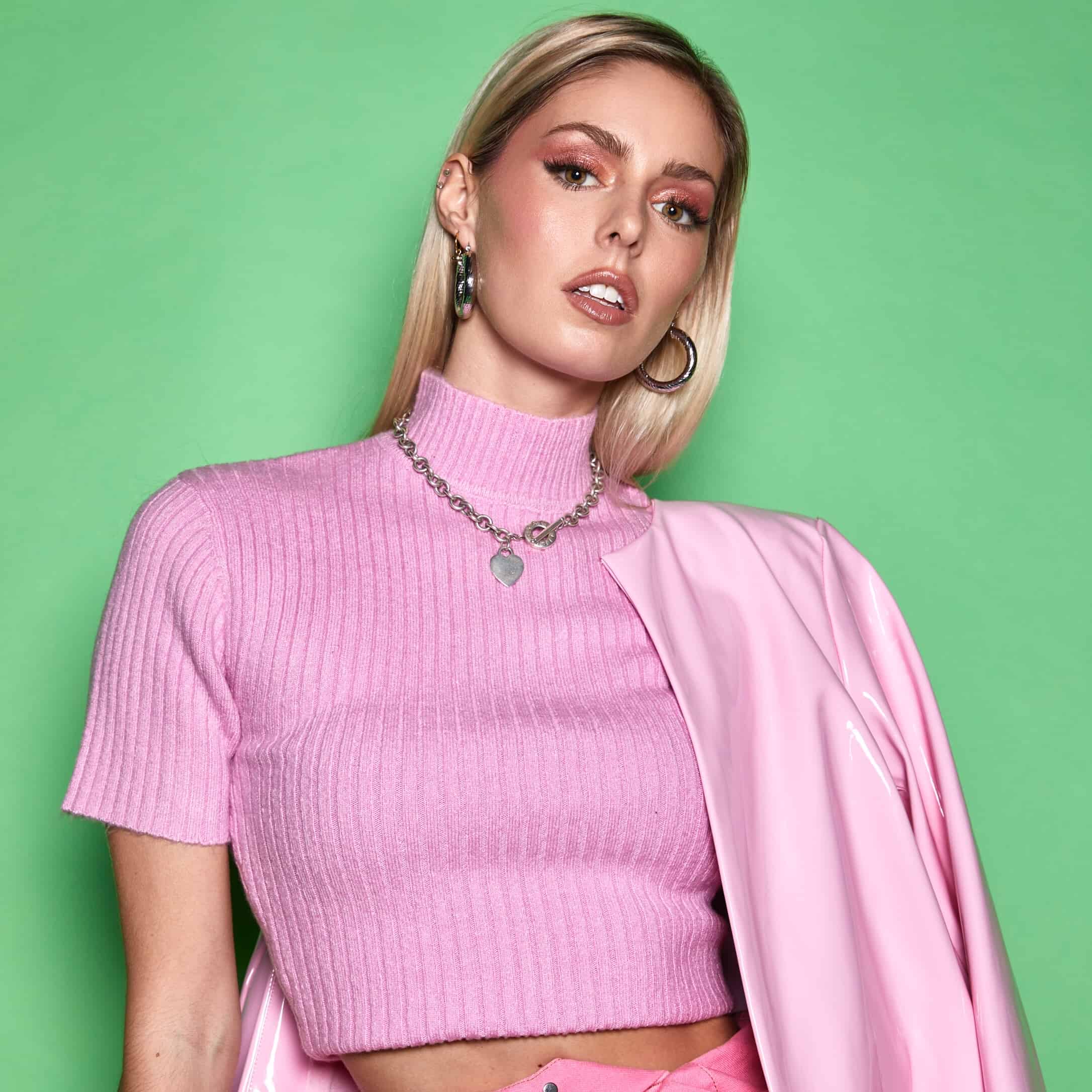 Speaking of single covers, they tend to vary in colour – is this a case of indecision or is there a clear stylistic choice going on here?

No definitely not indecision! We did a great shoot at the end of 2017 with all these really bold coloramas and we saw the photos and were just like ‘yes, this is it, this is the vibe of the music in visual form’. So since then, it’s always been a different colour for each single, reflecting the different moods of the song. Like for Business, cos it was my first song to show off a slightly more vulnerable side, we went for something a little more muted/pastel, which I loved. But Silly Boy had to be back to the bright and bold (using the Nickelodeon colours, an article pointed out to me recently, which I love and now just can’t un-see lol).

Your artist style feels very sassy and commanding, is this a reflection of your personality or do you use it as more of an alias?

Mmm, that’s a good question. It’s a part of my personality for sure. It’s definitely not me at all times, but in my songs, I kinda tend to take that element of my personality and embolden it. I can say things in my songs that I may not always have the confidence or the words to say in real life situations. So my songs let me express that side of me more freely. I can be sassy and commanding, but I can also be vulnerable and insecure and everything else in between. No doubt you’ll start to see those other sides come out more in future releases.

Who’s your favourite artist at the moment and why?

I don’t think I have one favourite right now to be honest. I’m very much in a phase of just cherry-picking a song from here, a song from there, you know? There’s some great music out at the moment, but if anyone’s gonna steal my ‘favourite artist’ title any time soon, it’s gonna be when RiRi finally comes back to us! I miss her so much it hurts my heart.

Early last year you spoke about coping with anxiety. What advice do you have for young people in similar situations?

Yeah, I mean I don’t suffer from anxiety in the way that so many people do – like in a way that affects their everyday life, so I’m fortunate in that sense. Mine is more something that comes in pockets, or waves, during times of high stress etc. I think my advice would just be to listen to your body and try to realise what works for you to help process or cope with it. I think for me, exercise and yoga and things like that really help. And knowing when I should just take the time to chill by myself vs when it actually helps to get out and socialise cos then I’m not all up in my own head.

What is the next step for Call Me Loop? Any exciting plans?

So many exciting plans! The “Silly Boy” music video will be coming soon which I can’t wait for, and then I’ve also got another feature record coming mid-Feb which I love and am super excited for people to hear. Then the EP in March! So all of that plus some really exciting shows coming up; some already announced, some still yet to be! I’m loving 2019 already and can’t wait for what the next 11 months are gonna bring!