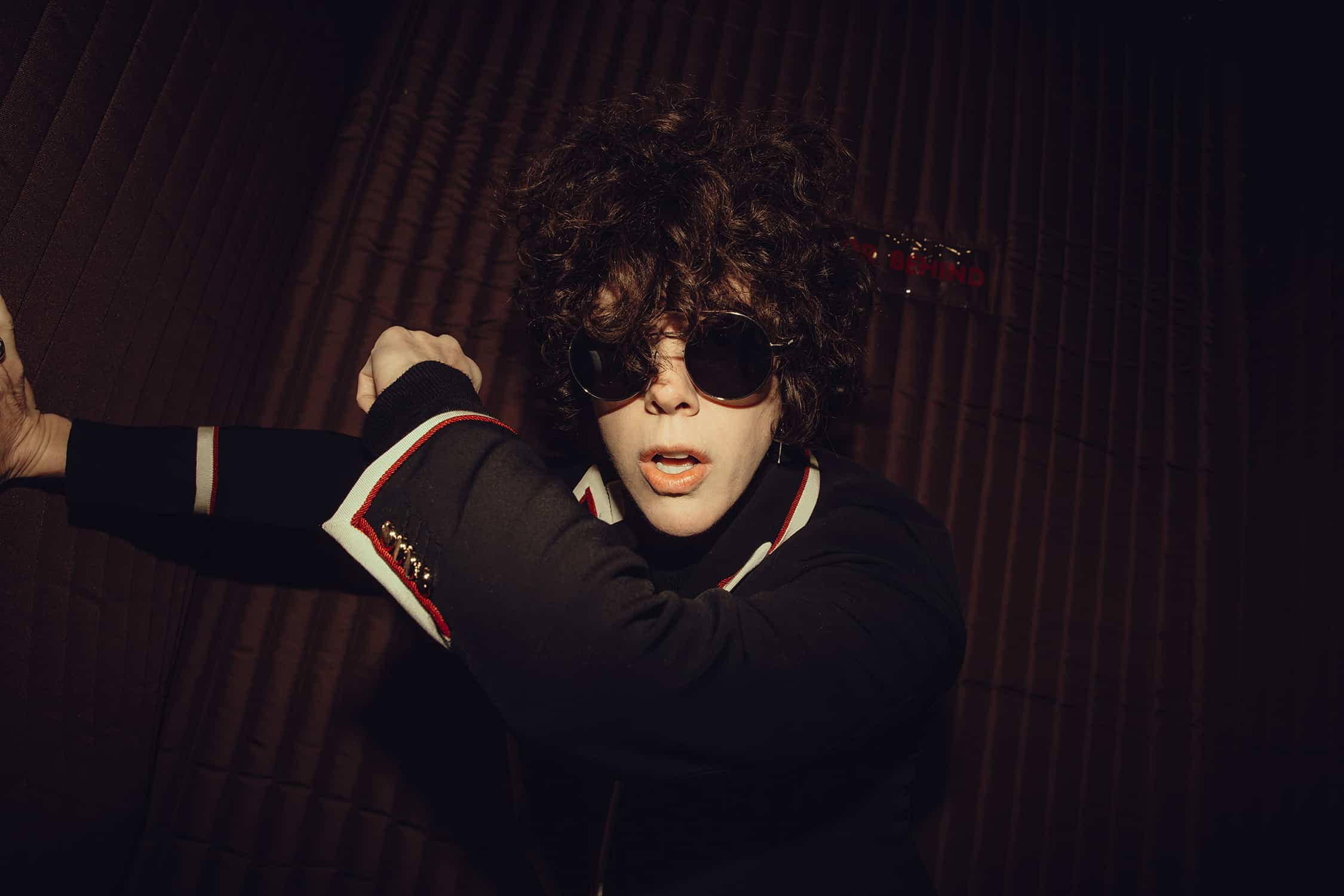 “It’s so exciting!” Laura Pergolizzi, aka LP, tells me the day before her latest record Heart to Mouth is shared with the world. Over a patchy phone connection following a power cut in LA due to heavy rain, she explains, “Today I’m doing an in-store performance at a place called Amoeba, which is this historic record store in LA, and I’m excited for that. And just anticipating tomorrow.”

An emotional affair, Heart to Mouth is the singer’s fifth album and hears the singer doing what she does best: revelatory pop-rock fueled by LP’s uniquely emotive and powerful vocal delivery. About the album’s title, and indeed the record’s overall theme, LP explains that “it just means being direct, you know, a direct emotional line to what’s going on in the heart of hearts, the heart of darkness. I think it’s literal pretty much, you know? A lot of these records are of an emotional bend, kind of my normal, what I talk about, but I just feel like I really wanted to have every song be its own little vignette of feeling.”

Slouched on a stool and donning a shocking orange suit, Heart to Mouth’s album artwork marks a departure for the singer’s usual style of a more conservative black and white album cover. “I think there’s just like a vibe and I feel like there’s a lot of color to this record for sure,” LP says of the artwork. “I mean I often do black and white and it just felt like a nice change for me. I think it’s trying to mix it up really. Art is a feeling to me, it’s not all literal, it’s just kinda where you’re at I think, again, it’s like, emotions aren’t always correct and they aren’t always the quickest way to get what you want but they’re just there anyway, so there it is,” she explains with a laugh.

That difference may be why LP doesn’t quite know how to feel about Heart to Mouth. “When I listen to this record I don’t know what to think about it, you know?” she begins when I ask her about Heart to Mouth’s music and whether there’s a song on the album which fans will connect with the most. “I know that – as a whole – I don’t put anything out song-wise unless I myself have wanted to listen to that song many times. I’m really honest with my own material; I get songs back all the time that I’m just like ‘yeah never wanna hear that again’ like ‘never listen to it again’ and it’s like a couple days of my life, possibly. But like if I have a song that I’m like ‘oh I wanna hear that again’– my own song, if I’m drawn to the narcissism then I put it on a record.”

She says it’s a similar process with all of her albums: “It’s like one of those things that I look for, you know, in my material, because I’ve had to go through it with songs for other people too and I’m just like ‘I really like this song’ and I’m like, studying it. And I would say songs– like, ‘Dreamer’ is a song I wrote for somebody else that I totally forgot about and my publisher sent it to me and said ‘you should do this song’ and I was like ‘yeah it’s a cool song, I feel like I wrote it’ and he goes ‘you did write it, ya dummy!’ It’s just there was another woman singing it, she just hadn’t used it. So yeah, I just look for something in a song that I like and I am drawn to it and then I put it on.”

We then get into LP’s history as a prolific songwriter. So impressive and so varied, the artist has written for pop queens like Cher, Christina Aguilera, Rihanna, Leona Lewis, and even Heidi Montag. “That’s so funny,” LP interrupts when I mention that it was her songs for Montag’s debut album Superficial which put LP on my radar. “It’s adorable that that comes back to me. I’m always like ‘oh right! Yeah…’” she explains. “Listen, I was just like– I had been writing a bunch of songs and literally Spencer her husband, who’s a wildman, him and the guy who produced all those songs were like ‘we want all these songs’ and it was just like– honestly, I think that was the first thing I got hired for when I got my first big publishing deal and she was on Warner Bros. and it was just a way to get through my song commitment so it was like ‘Here! Take ‘em, do what you want.’”

Despite her success as a storyteller for other artists, it’s not really the focus for LP anymore. “I’m so consumed with my own shit right now that I don’t think about it much, but I would love to write a song with or for Bruno Mars, something like that, someone like that, who I love their voice, their character, but yeah I don’t have anybody in mind per se. Or someone like Adele. Someone like that who’s got a great voice and just emotes you know… someone like that.”

She explains that some of the material on Heart to Mouth was “resurrected”: “‘Dreamers,’ I wrote that for somebody else and that, I just took that back because it fit. That song was written about my situation, so I just felt like you know ‘I’ll take that back’ and no one was using it and ‘Recovery,’ I remember writing that for someone else – no one in particular, I think I thought it was Leona Lewis but I’m not sure about that right now – but I had that song laying around for a while and there were many people who had looked at it to perhaps do it and then I just felt like it fit this record, and when I wrote the song I was on one side of that situation where I had left the person and I was tryna write it from their perspective of getting over it, and then I was in the same situation where I needed to get over it and break the cycle of addiction of love. I think songs- that’s what’s cool about songs, once they exist they have a life of their own, possibly – or they just sit on your computer and die, but most of the time they do that – but sometimes you can resurrect them.” It’s not hard to imagine Leona Lewis belting out the chorus to “Recovery” (“can’t you see? / I’m in recovery”) but LP’s stunning vocal performance during the song is unrivaled, and really drives home the emotion behind her lyrics – it helps to put the Heart to Mouth album title into context.

Although she released her first album back in 2001, it wasn’t until 2015 that LP saw true mainstream success for her own music with the explosion of her singles “Lost on You” and “Muddy Waters” from the Lost on You album. “It’s a difficult business to predict,” LP says. “I think it’s one of impermanence and unpredictability and I think to me, one of the things I think that you can’t lose for yourself, in general, you don’t know the winds of the public, but one of the ways you can just do what you do is keep working. Keep putting out music. Keep creating. I mean, I don’t know who’s gonna listen per se, but if they need me I’ll be there still writing songs. I mean, I was doing it when nobody was paying attention and I’m doing it now, so that’s just how I roll. I’ve been making a living as a writer and I did that for like 10 years – over 10 years – so that’s what I know to do, and now I’ve been blessed to get the opportunity to also sing the songs that I’m creating so you know, I take it very seriously and it’s just like, what I do.

“I don’t believe in backup plans. I mean, I’m not a fucking idiot, I can do a lot of things, so yeah I decided to just do this. I think backup plans are just like… extra, they are distracting, to be honest. My biggest thing is quality and I just wanna put out and create songs of quality, of depth, of meaning for me, and then I think hopefully the audience will appreciate that, but that’s what I’m consumed with, trying to increase my skill of how to communicate with people and with ideas and make myself a better songwriter, better conveyor of experience and that’s all I’m tryna do, expand the sonic palette, shit like that.”

As an openly queer artist, LP and I then dive into the mainstream success achieved by up and coming queer artists like Troye Sivan and Hayley Kiyoko as well as the movement coming up where queer artists are becoming more accepted for who they are in the mainstream media. “I think that the biggest thing is, it’s them being gay is beside the point, us all being gay is beside the point – that’s what movement is, that’s what forward movement is. We’re trying to break down the boundary of it being something that’s even thought about,” LP explains as her dog Orson barks away in the background.

“It’s funny that the Queen movie is out right now, because there’s a bit of a parallel I believe between the fact that so many people loved Queen, and Freddie Mercury wasn’t hiding per se, like yeah he wasn’t sitting around talking about all the men he fucked the night before in interviews– or at least, interviews I’ve seen– but people… they were with it, it was like ‘it’s there but I love this guy’s music and whatever it is’ you know? And now it’s like, I feel like that’s coming back, even though people are more out about it and I just believe in subtlety, even though it’s not always so subtle what I’ve done– what we do– but I believe there’s a certain level of decorum, where it’s like, ‘I don’t need to fucking tell you what I’m doing behind closed doors like that, even though you can guess – can you not guess?’ and I like that aspect of the forward movement, where it’s like, it’s just what’s a dignified place to be in society, in life, like, get over it, it’s not that big a fucking deal.

I think if [queer people] just keep fucking being there, you know, it’s like that fucking tried and true ‘we’re here, we’re queer, get used to it’ thing you know? That’s just what that is, and I think if people keep creating great quality music, like Troye Sivan and Hayley Kiyoko, it’s just like, that’s what you wanna be known for. That’s what Queen is known for. That’s what matters.”