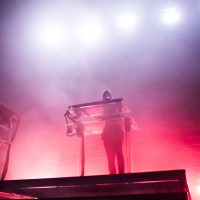 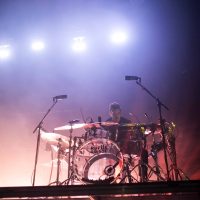 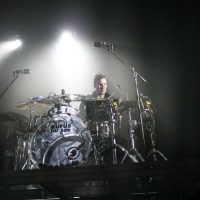 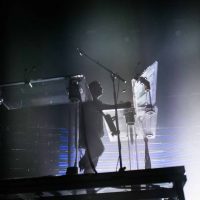 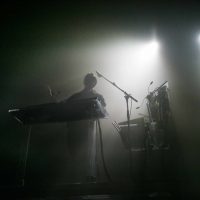 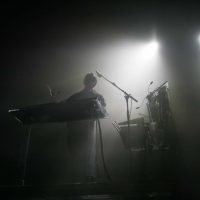 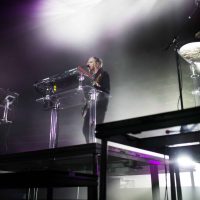 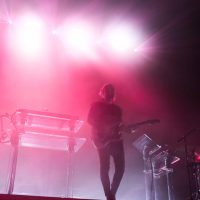 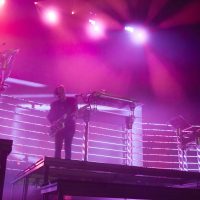 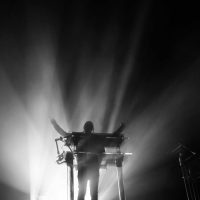 At the stroke of 11 pm on November 23, Rufus Du Sol hit the stage of Terminal 5 for the first time in roughly two years. The first time they found themselves performing in the iconic venue, they were warming up the stage for headliners Odesza. This next time, they were promoting their 2016 album Bloom. But this time something was different. Like last time, everyone had arrived to see Rufus Du Sol as a headliner. But this time, they did it again the next night. And the next night. The trio sold out three consecutive nights at Terminal 5, performing for crowds that knew every word to every track on their most recent release, Solace. Solace is a collection of mesmerizing tracks that feel more like a dream than reality–the melodies feel soft but perfectly unsettling when offset by the elegantly crafted deep bass lines. This composition, combined with lead singer Tyrone Lindqvist’s pitchy, delicate vocals make for a truly intriguing sound that is truly unique.

Arriving at the show, I was speculative of what a live band could offer that their records did not. After all, they are often categorised as an electronic act, rather than a band. Their sound feels like something that could not truly be replicated in a live capacity, given their reliance on synths, drops, and layering of dozens of instruments rather than simple musical melodies. However, from their opening song, “Eyes,” it became clear that their music was able to transcend the boundaries of their recordings. Somehow, they performed even more impressively live.

This continued to be a consistent theme throughout the entire show. Watching part of the show from above, I found myself completely mesmerized by Jon George’s keyboard and synth performance. From a balcony viewpoint, the audience could see not only his fingers moving across the keys to create what felt like five different instrumental sounds at once, but also the sonic patterns of the sounds themselves through a screen next to his keyboard, where constantly evolving patterns would appear as he twisted knobs and pressed on keys. The immense attention to detail and agility, not to mention artistry, required to be playing these instruments and seemingly be constantly creating new sounds was fascinating to watch, only giving their performance even more depth.

Highlights of the show included an older single “You Were Right,” as well as newer tracks such as “Treat You Better” and “New Sky.” They closed the show with a crowd favorite “No Place.” The energy throughout the entire room for a majority of the show felt like a mass entranced by music, collectively swaying side to side and singing to every word. When the Lindqvist began to sing “No Place,” a new level of energy emerged. The trio could not have chosen a better song to end their set with–each person in the crowd belted the bridge as they led into the drop dancing along to every beat. Set aside it being a crowd favorite, the performance of “No Place” was impressive in and of itself. There’s something frantic, yet dreamy and distant about the drop. The verses have an immense amount of depth that make them feel airy, yet when the drop comes in it hits hard enough that it creates the perfect amount of tension with the rest of the song.

The only pitfall of their performance was the bass. At times, it could feel completely overwhelming to the point that the elegance and dreaminess of their composition felt lost. While electronic music is often reliant on heavy bass to create hard-hitting drops, but at times it completely swallowed up the rest of the music. With a small amount of changing up the mixing of the output of the instruments, the only flaw within their show would easily disappear. Overall, Rufus Du Sol goes down as one of the single most impressive live performances by any electronic artist that I’ve seen. Rather than merely replicate their studio sound, their live performance added depth and artistry to their sound in ways that didn’t exist in their recordings.