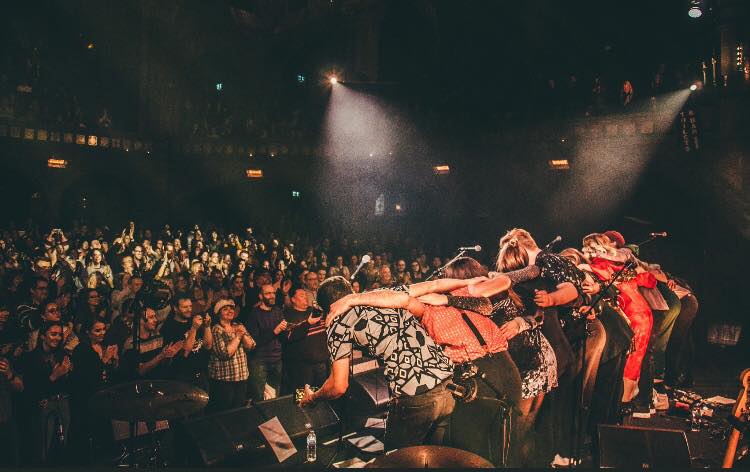 Set in the grand and imposing Union Chapel, adorned with dainty tealight candles, a towering Christmas tree and fairy lights that make the setting feel as traditionally festive as possible, is London-based label Never Fade’s third annual Christmas Party. The record label was founded by English singer and songwriter Gabrielle Aplin initially to self-release her music but is now also designed to develop and launch the career of other artists, such as Sonny and Hannah Grace, both of whom have performed the last two Never Fade Christmas Party events. Headlined by Aplin, the 4th December line-up also includes Lewis Watson, Orla Gartland and Lauren Aquilina.

Beginning with a cover from their recently released December EP, a release intended to raise money for the homeless, Gabrielle Aplin and Hannah Grace enchant the chapel with Joni Mitchell’s “River”, a delightful version of the melancholic reverie, with both of their vocals blending softly and seamlessly into one another. 19-year-old singer Sonny then maintains this intimate and melancholic nature with his original song “Let Love” with Martin Luke Brown, a candid, emotional ballad, with delicate twinkling piano notes and the best of Sonny’s soaring vocals, as well as a powerful and impassioned cover of A Star is Born’s “Shallow”, during which Welsh singer Hannah Grace makes her second appearance of the night.

With more of an uplifting nature, Orla Gartland delivers a Regina Spektor-like original song that “is a bit existential”entitled “Why Am I Like This?”, where Gartland asks for some crowd involvement and seems surprisingly shocked by their agreement to it. “This is a chapel after all”, Gartland jokes, “There is a certain amount of respect”. Gartland’s voice fills the chapel with “Between Your Teeth”, with a rich-sounding guitar and beaming red lights. She closes her set by inviting Aplin, Grace and Lauren Aquilina on stage for a fun, collaborative offering of her new single “I Go Crazy”.

Aquilina then takes to the stage alone, and after having taken a break from performing, during which she started writing for other musicians (Plested, KLOE), she makes a confident comeback. After revisiting old single “Fools”, an emotional ballad of love, she plays her new comeback single “Psycho”, an infectious Lorde-esque track, with lyrics that tell “a true story about some girl that went to her ex-boyfriend’s house in the middle of the night and cried until he came out in his towel and took me inside,” she explains. “And that girl was me.” She then invites Gartland onto the stage for a bouncy cover of Ariana Grande’s “Thank U, Next”, which they admit they learnt only earlier that day. “I can’t believe we’re about to sing this song in a chapel”, they joke. “I’m so sorry for making you sing this,” Aquilina adds.

Lewis Watson was then welcomed to the stage, with his simple woolly jumper, jeans and small acoustic guitar perfectly embodying both his melancholic musings and the cosy setting. His poignantly sincere new Christmas song “Christmas Eve Alone This Year” deals with the inescapable loneliness Watson struggled with when abroad in America last December. “I have a very good life and I don’t like to complain about the bad things,” he says. “But I would have traded everything I had then in to be with family and friends.” With deep blue lights imbuing the stage with a solemn aura, Watson sings openly about missing his hometown Oxford and the struggles of travelling to aid a music career. He then transitions into “Little Light”, “the reason I’m not living off of soup. It’s done really well on Spotify”, he says, and rightly so, it’s tender yet catchy nature making it a clear standout.

Though the show as a whole differs from others – there’s far more people drinking hot chocolates than beers tonight – as Hannah Grace emerges onstage the night begins to transform from an intimate show, as if each performer is merely showing their friends their set in a living room, into a more conventional, theatrical concert, complete with fog machines and a more expressive light show. Her vocal prowess during major-hit “Praise You” (the one from those Lloyds ads) is uncanny. It’s clear she needs no help, but she enlists the crowd for “With You”, transforming them into a three-part harmony for its more subdued tones. That is, before the track reaches its crescendo, with Grace channelling the late Aretha Franklin with an immense range that she revisits, albeit to a lesser extent, as Aplin joins her for the festively-themed title-track of the duo’s brand new EP.

The crowd eagerly await Aplin’s appearance, and after just a few short minutes, she is enthusiastically welcomed to the stage. For her first song, she invites partner Alfie Hudson Taylor (½ of brother duo Hudson Taylor) for a never-before-heard original song about “when your families are really annoying at Christmas”. With an optimistic, Crosby, Stills and Nash-esque nature, they both sing “so if you’re lonely, well so am I, we’re gonna ride on a wave of a brand new day tonight”. She then, of course, delights the crowd with a festive, stripped-back rendition of “The Power of Love”, managing to silence the chapel as her voice soars effortlessly and croons delicately through the song. Staying at the piano for  her recently released single “My Mistake”, the first performance of this song in front of a large audience, Aplin proclaims she “can’t play the keyboard standing up” but masters it on both songs. “[My Mistake] is about me feeling like shit. I usually can keep it professional when I work with those I don’t know but I really could not be bothered that day. There were three of us, a dog, and a sofa, and this is what we came up with”. The singer remains at her piano for the song’s duration, but is joined by her band for a more dramatic and affecting final chorus. She then revisits “Please Don’t Say You Love Me”, and delights again with a bluesy cover of Elvis Presley’s “Blue Christmas” alongside Hannah Grace. To conclude, Aplin provides an upbeat rendition of “Miss You” that elicits more movement than you’d expect from a crowd sat in pews.

“I would wait a bit longer but I think there’s a curfew”, Aplin confesses as she emerges on-stage only a short few moments after having left it for the inevitable encore. Each of tonight’s performers arrive alongside her to help sing a lively and heartwarming cover of Mariah Carey’s “All I Want For Christmas Is You”. As the group come together once again, the camaraderie between the Never Fade roster is evident. The numerous collaborations, along with the grand finale, help the event feel informal and intimate with a welcoming feel often lacking from the imposing and crowded setting of a concert. Though each artist brought their own creative flair and aesthetic, the night as a whole feels more like a collaborative effort than a series of distinct individual performances.