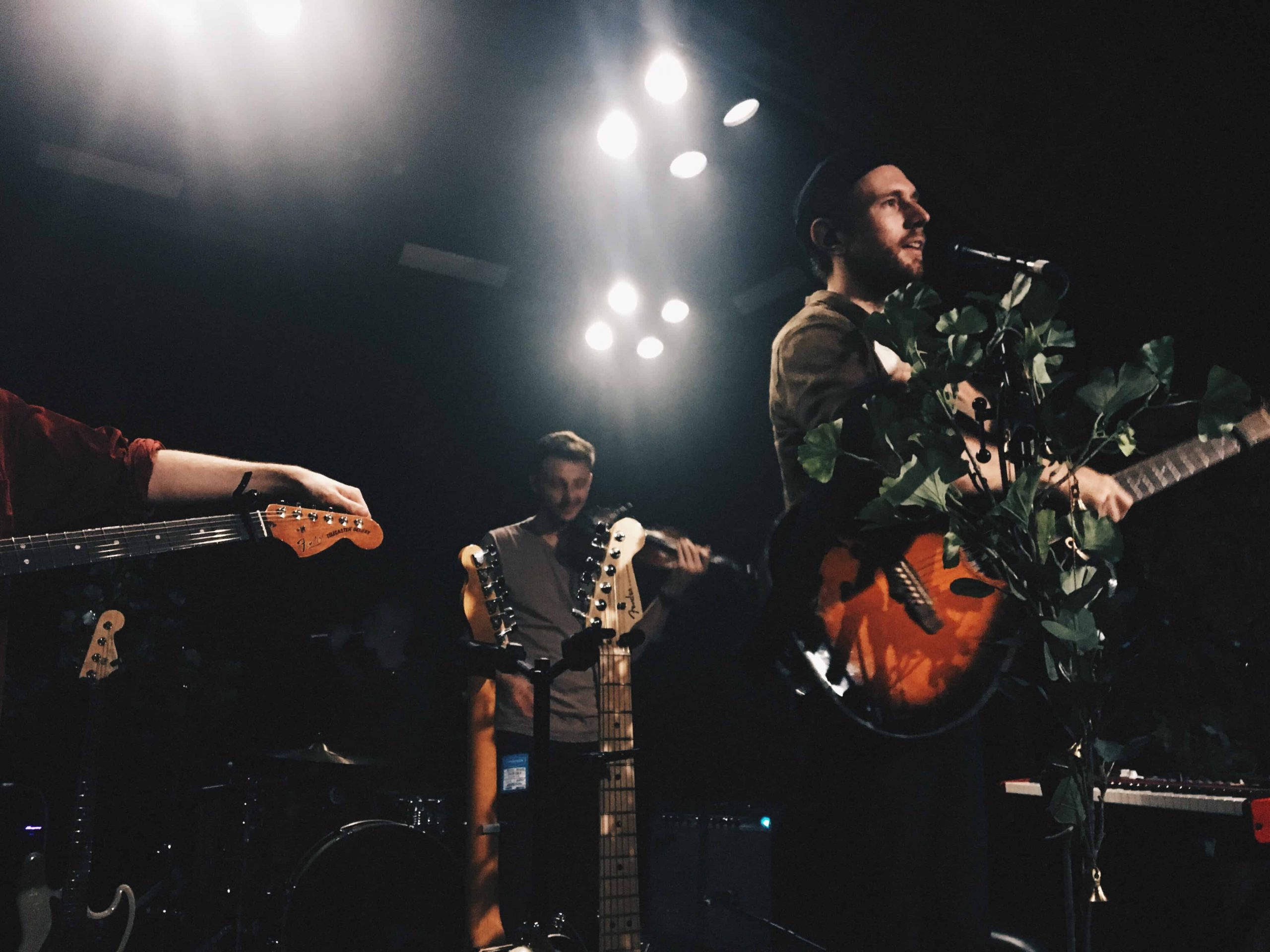 Nervously tender Novo Amor surprised fans with an intimate show at South London’s derelict haven OMEARA on 11th October. The show was a warm-up performance ahead of his upcoming UK & EU tour which supports the imminent release of his debut album “Birthplace”.

The crowd are in good spirits, patient and eager to hear the new material they’ve been desperately waiting for. The room falls silent as frontman and creator of Novo Amor, Ali, walks into the stage accompanied by his bandmates – one of whom is his fellow collaborator and writing companion Ed Tullett. The set comprised of primarily new material began with five new songs: “Emigrate”, “Birthplace”, “Utican”, “Anniversary/13494” and “State Lines”.

As they begin, my chest vibrates due to a thunderous bass and drum kit, before each segment of the first song, “Emigrate”, you can hear Ali quietly trying out the melody, ensuring his delicate falsetto is perfectly poised and pitched, and it was. The first four songs bled into one another allowing Ali to hold the audience in the palm of his hand; “to clap or not to clap? That is the question…”.

“Birthplace”, which won Independent Music Video of the Year, held its own in the set. We caught up with Ali at the end of the show and asked him: “Was ‘Birthplace’ higher? Because it sounded so…” to which he replied: “Yeah, for some reason I get so nervous live, with people watching me and the pressure, I have to go higher [with the falsetto] so it was actually a step up to what the recording is. Because I’m more relaxed in the studio I can take my time…”

“Utican” was vulnerable, delicately performed; the violin throughout the set was spine tingling. “Anniversary/13494” was extremely powerful yet peaceful in its progression, as I looked around the room I could see a sea of faces, closed eyes taking in what they were hearing for the first time. Before the song came to an end, Ali broke his silence and addressed the audience with thanks and grace. He had beaten his nerves and got the first few tracks over and done with, and quite successfully I might add.

“State lines” consisted of layers of serene harmonies and intricate guitar work from Ed throughout, not only this song but the set itself. You could almost hear a pin drop during the quiet moments; you wanted to hold your breath; no one wanted to speak. At the front I could hear every click, ever pluck of a guitar string being tuned, the flicker of a switch from an effect pedal (yes it was there, but it added something to the stage).

“Carry You”, “Sleepless” and “Anchor” followed, sandwiching the old with the new, almost like passing the baton. They worked well side by side and lyrically, it felt like an ending to a story that’s been waiting to happen.

“Repeat Until Death” was in Ali’s words, “my favourite song on this record.” The title of this song alone set the crowd into a frenzy; you could see people gazing in awe at the stage – a special moment I’m sure Ali would be proud of.

As the band step off stage leaving Ali & Ed alone, they perform a song from their collaborative album, Heiress, just the two of them, harmonies and pure tenderness as Ali plays the stripped back piano rendition, ahead of their final number “From Gold”. One of Novo Amor’s older tracks, it’s a perfect reflection of all the music I’ve just heard. Combining thunderously warm drums to tear-jerking falsetto harmonies, pushing and pulling from loud to quiet, it bridged all the gaps. A profound performance…and that’s just the warm-up show, be sure to catch them this autumn.