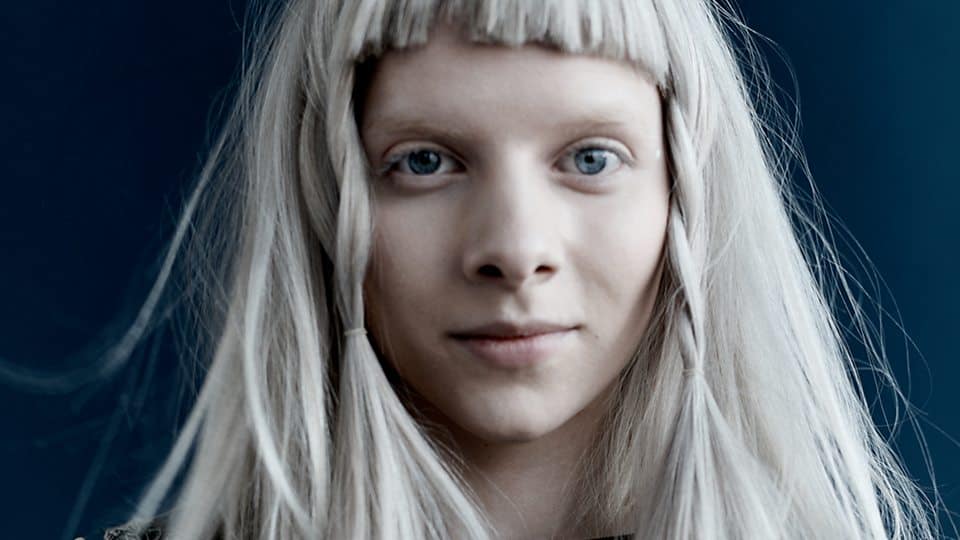 Aurora Aksnes, better known as AURORA, gave a conceptual art performance to a completely sold-out London O2 Forum on 11th October. With her compelling laments of love, loneliness and death, the Norwegian singer’s knack for theatricality proves powerful as she performs songs from her new album Infections of a Different Kind – Step 1.

Costumed in an ethereal ensemble as if she has stepped out of a world of Nordic folklore, Aurora, treading barefoot, places herself gracefully in the spotlight. With no prolonged introduction, she gives a haunting acapella vocal performance of “Nature Boy”. “There was a boy, a very strange enchanted boy”, she sings, darkly, defiantly. She exudes a stunning mythical presence – a facade which falls as the song ends and the singer begins to excitedly dance on the spot and throws up two devil horns.

With no interruption, she seamlessly weaves in a chilling performance of “Churchyard”, transcending from morose tones to an eerie, unearthly range, with a falsetto screech that resembles that of Kate Bush. The singer travels from a powerful, mythical presence to a timid, warm-hearted one. “I feel like I have the flu, but it’s good”, she says, referring to the tingles the crowd’s response gave her. She’s extremely humbled by the response and, from her wholesome excitement, you get the sense she’d be humbled playing to a crowd of two in a dingy pub.

The music and Aurora’s voice work flawlessly and are bolstered by a trio of black-clad contemporary dancers that she occasionally joins in with, whether that’s just for a few short second bursts in the midst of a routine or for a full body workout. In “Winter Bird”, for instance, where the addition of the dancers subtly complement and enhance her storytelling and the anthemic instrumentation. Or “Soft Universe” which sees them moving forcefully and haphazardly, which Aurora joins in with, eventually dancing sporadically and freely in unison. It lends a sort of animalistic approach to the already fast, driving beats and strobe-like flashing lights. It is far from distracting or overshadowing though, instead the dancers accentuate the song’s narrative and mood, often allowing the audience to travel into the landscape of the song.

The set exudes both chaos and minimalism and constantly shifts between the two. It’s as if Aurora is presenting two personas – a sheepish, humble and endearing persona with a delicate voice that talks of love that we see in between songs, and the commanding performer who exudes a grandiose mythical aura, capable of stunning a room into silence with a powerful and otherworldly presence. Her show too has two sides, that of whimsical improv – talking at length about the mating habits of alcohol-adoring banana flies during mic troubles or having the need to reposition her speakers because they aren’t symmetrical, “I can’t live like this anymore”, she jokes – and that of rehearsed theatrics.

Reverting back to familiar melancholic musings, the night’s biggest thrill and the most crowd involvement comes during the moving ballad “Runaway”. Harnessing the heavy despondence of the song, Aurora’s voice soars effortlessly along with the atmospheric instrumental additions, the almost choir-like vocal inclusions and a lot of expressive hand gestures. Together, they cleverly construct a sense of comfortability and exhilaration.

The audience is as ecstatic about the new songs as old favourites. “This song is about the right to love whoever you want to love”, she says, before twirling and gliding to the introduction of “Queendom”. The song radiates the notion of celebrating and empowering differences: “the underdogs are my lions, the silent ones are my choir, the women will be my soldiers”. The trio of dancers surround the singer, almost encompassing her with their heads on her shoulders as if positioning themselves to be painted – a stunning visual touch. Meanwhile, Aurora’s voice proves capable of shifting in form, building from the stark intimacy of the verses to the primal power of the anthemic chorus.

Aurora’s performance dismisses the notion that one must keep up an aesthetic to maintain its artistic impact. Each time she launches back into a song the crowd once again falls into admiration, even if she had been pointing out the holes in her socks just seconds earlier. Indeed, theatrics, grandeur and simplicity seem to be the most distinctive elements of her performance, but whilst she exudes a theatrical power, there is a constant sense of rawness and realness to it; rather than an act it is the simple embodiment of the song’s narratives. Aurora travels from delicate innocence to powerful dominance in seconds, taking the audience on a visual journey of each song, and allowing a closer insight into the celestial, otherworldliness of her storytelling.