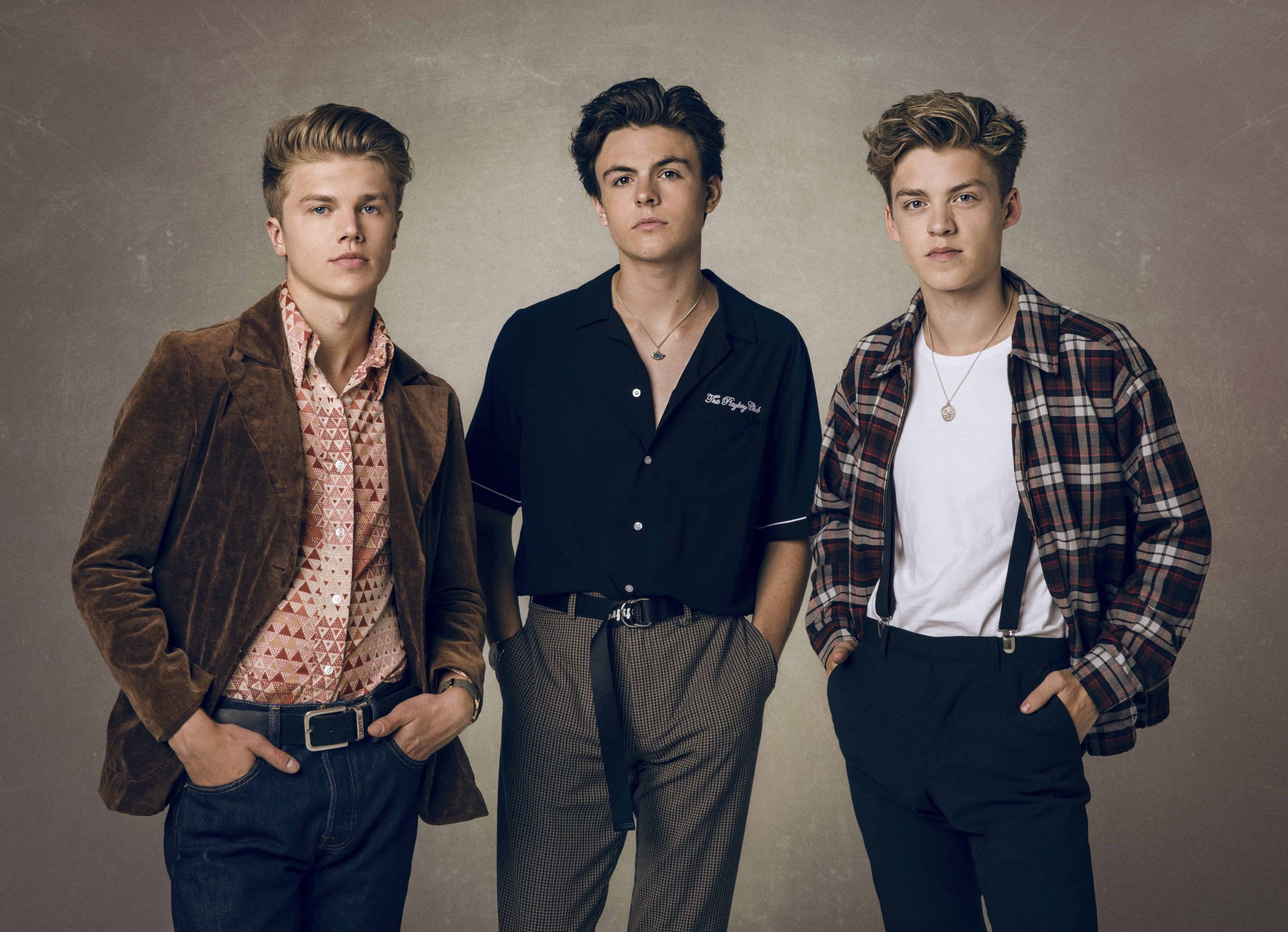 The band are quickly establishing themselves as the go-to for buoyant, romantic pop, and it’s no wonder – they’re signed to The Vamps’ record label. Reece, George and Blake first caught their attention when they covered their song “Wake Up” and have now got over 40 million streams on Spotify alone, as well as two sold-out headline shows in London this summer.

We caught up with New Hope Club’s Reece Bibby, to talk about the band’s latest single, “Crazy”, three-way high five rituals, and not being able to dance.

Tell me about your journey as a band. How did you get to where you are today?
George was the first member of the band, he was approached by a potential manager at the time. He was posting covers on YouTube and playing gigs in pubs around where he lives. He then started meeting up with different people, trying to find the members of the band, one of those people was Blake. They were meeting up on the weekends in between school and writing songs together. They then added me after seeing me on X Factor, we started meeting up and we all became best friends instantly. Watching films, playing video games and writing lots of songs was what we mostly did. Not long after that, we started doing covers and postings them to YouTube, quickly gaining followers, here we are now!

What’s the origin of the name ‘New Hope Club’?
We came up with hundreds of names but we found out it is very hard to choose just one. So mashed a couple of them together. We loved the idea of being a ‘Club’ because it’s something our fans and supporters can be a part of, almost like a family. New Hope just sounds really positive and thought they sounded good together. We weren’t worried too much about having a “bad” name because we think there have been many great bands with terrible names in the past, it’s all about the music.

What inspired your latest single, “Crazy”?
Crazy is all about a relationship which is Crazy in a good and bad way. Crazy because you make each-other go insane and blame each other for everything that is wrong with the relationship, but also you are crazy in love so neither person can leave.

How are you setting yourself apart from other boy bands?
A traditional idea of a pop boyband is no instruments, usually not writing their own songs and sometimes dancing. I think we are the complete opposite of that, we all play guitars and other instruments and have been writing from a very early age and definitely can’t dance – although we do give it our best shot on stage.

You’re signed to The Vamps’ label, Steady Records. How have the guys helped shape you as artists?
The Vamps have been a great inspiration for us as a band, firstly just the way they are as people have helped us. They are a successful band that is still very humble and great people which is something we have taken from them I think. They are also very talented and have a great live show, getting to watch them most nights on stage has helped us with stage presence and learning to enjoy ourselves. We also write a lot with the boys which is a lot of fun.

How do you prepare to play live? Do you have any pre-show rituals?
Before we go on stage we link arms in a circle, have a little pep talk to get each other hyped for the show and then sing a song about the city we are in. It is finished with a three-way high five. If we don’t do this, we can’t have a good show!

How do you balance being in the band and your personal life?
We always stay in touch with family, we call them every day and they are always checking in with us. Family is very important to us, when you are so young and never have any time at home it can get hard at times but we make sure to always touch base. We think it’s a small price to pay to be living our dreams and traveling the world doing what we love.

Is there any advice that would you give to aspiring musicians?
Social media is key! It is such a powerful tool and we are lucky in this generation that it is bigger than ever, don’t be afraid to put yourself out there. You will always get negativity, it’s about how you deal with it and how you turn it into something positive that will help you. That, and it’s never too late to start something, if you want to learn something then just do it, start today not tomorrow. You will always be better than you were the day before.

What would you do if you weren’t in music?
We often get this question asked and every time we stutter and have to think hard. I think honestly we are just lucky to be doing what we love because I’m not sure we could feel fulfilled in any other line of work. However, George does say he would like to be a gardener quite often.

Tell us something that people would be surprised to know about you?
We still share a little hotel room everywhere we travel. We like it that way, we get to spend more time together writing or recording than if we had our own space all the time. However getting ready in the morning is sometimes a struggle to the bathroom mirror.