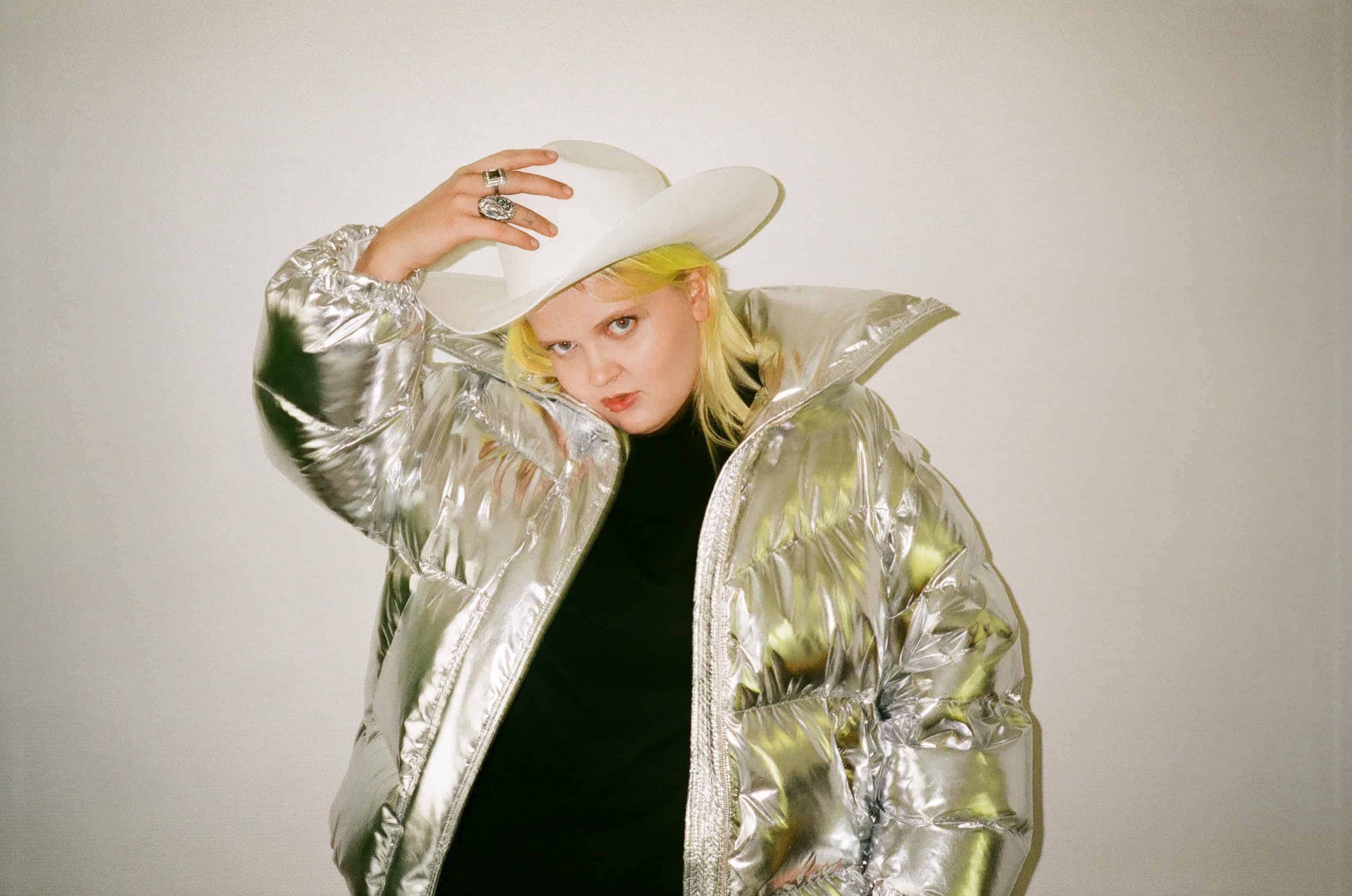 With a bold as brass image (note her fluorescent hair and goth garms) and badass soulful vocals, Finnish pop musician Alma is a force to be reckoned with. Despite having not yet released an album, she’s already garnered millions of streams and collaborated with heavyweights such as French Montana, Tove Lo, Martin Solveig and Sub Focus.

We sat down with the singer before her gig supporting Halsey at London’s Hammersmith Apollo to talk about her new single, “Cowboy,” overcoming her fears, partying hard with Charlie XCX, and not acting like an artist.

You’ve already been working with some amazing artists – who would you love to collaborate with in the future?
There’s so many! Lana Del Rey, Miley Cyrus, Lykke Li. Every female artist who’s doing their own thing in their own way.

Tell me about your upcoming single, “Cowboy.” What’s the meaning behind it?
I’ve been working on my album for three years now. I had it done two years ago but then thought, fuck it, this isn’t something I want to do, this isn’t me. I went to LA and it felt very big and I was very fucking scared and super lonely. I thought that I had to give myself an alter ego, like a cowboy who wasn’t scared of anything, even though I’m scared a lot of the time. In LA I had to be strong, so that’s when “Cowboy” was made. The whole thing is about me leaving my hometown, going to America and trying to conquer the world. Fuck everything else, fuck anyone who’s negative towards me.

It’s a really powerful song. The way you say the word ‘cowboy’ – it definitely emanates a strength and confidence.
Exactly. Nobody can tell me who I am or put me in a box, which they’ve tried to do. I’m a cowboy, I can do anything, I can go anywhere and be anything. 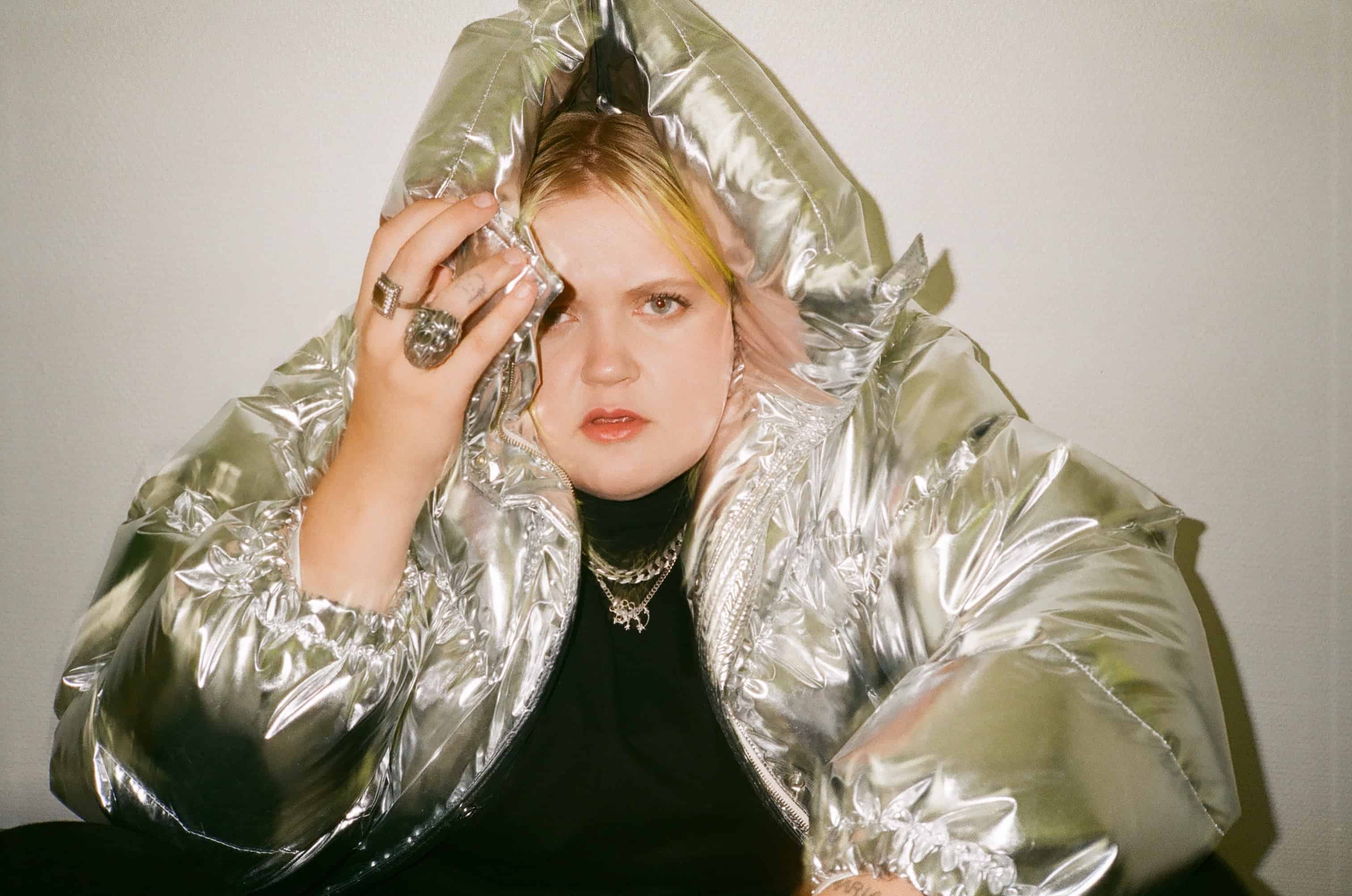 You’ve said before that you get really nervous before you go on stage, but you seem so fearless. How do you do slip into that confidence? Are you any closer to overcoming those fears – especially with a tour of the US and Europe coming up.
I think I’m used to it. It took me a lot of time – almost a year – to get used to performing and not get super anxious. Until I was 17 I’d never performed anywhere – nothing! Not even a piano. So it was a big shock for me to suddenly be touring around the world. Now I’m free. I’m super free when I’m on stage. I don’t care what I do or how I dance. When I’m in the club and a good song comes on, I wonder if I’m dancing in a stupid way, but when I’m on stage, I don’t care.

You’re also working on your debut album – set to be released early next year. What were the inspirations for the record?
The album feels like my graduation. It was a long journey because I started it when I was 17 and I’m 22 now – still a baby but I’m doing adult stuff. The whole album is me finding answers to the questions I’ve had since I was born. Who am I? Who I need to be, what I can do, who I can love…I think it’s going to be a very important album for kids that are like me.

How do you hope the record will make people feel?
I just hope that people get a lot of good power and energy from it. Empowering people to do what they want. How I live this life is just to be kind to people and just do what the fuck you want. The whole album is just like, don’t be a dick. There’s a lot of memories from my childhood and teenage years – a lot of anger about what’s happened to me. Every story ends in a good way. I feel like I’ve conquered all my fears and pain. I hope people will learn something about themselves. 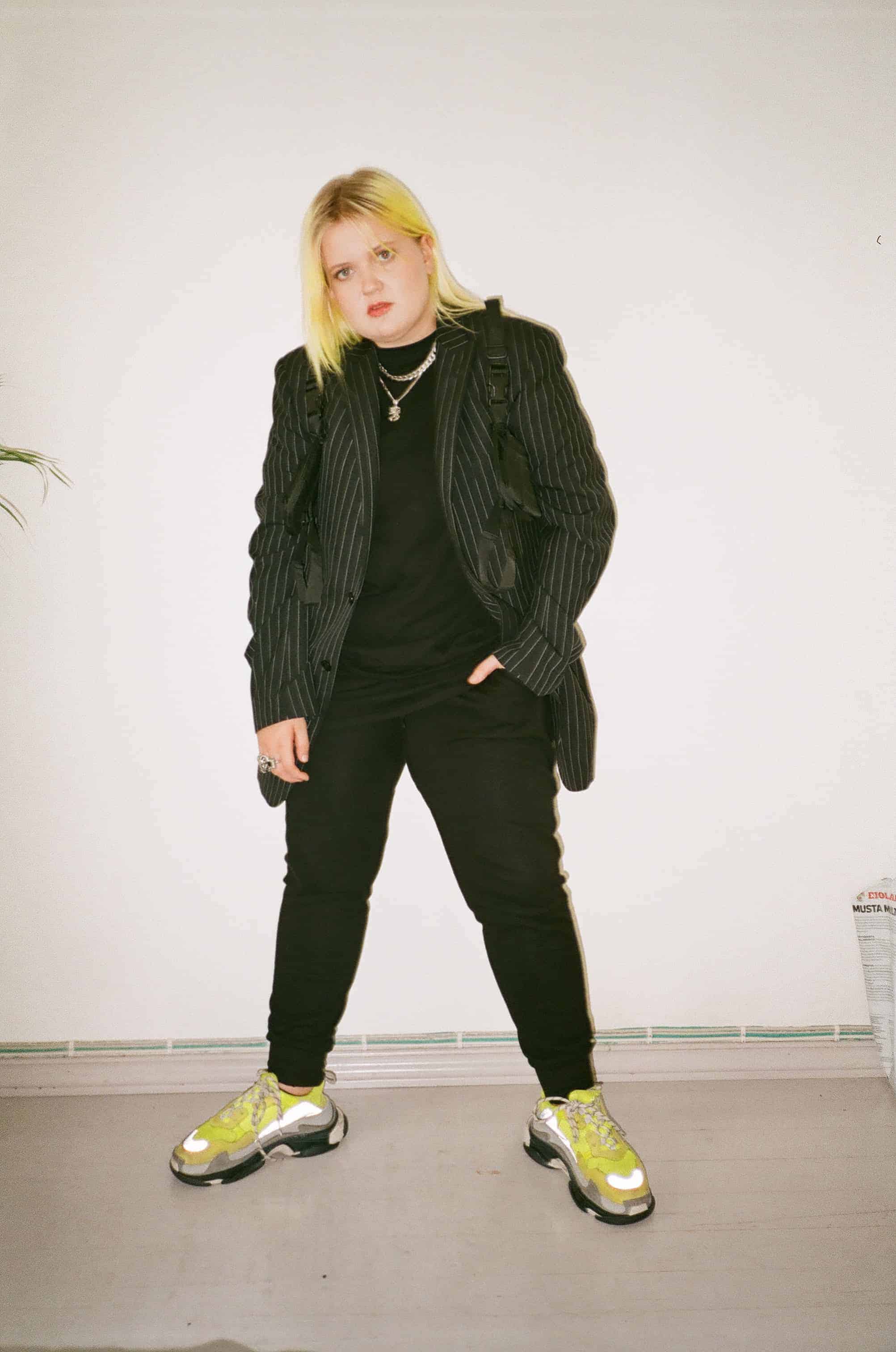 You’ve got an incredible sense of unique style. How has music influenced that?
I’ve tried every style there is but over the last few years, I’ve found that I just like to be really comfortable. People always say I have good style… I bought this [she points to her sweater] today from a flea market but then I can have designer shoes. I don’t like to be dressed fully in a brand, like Gucci, Gucci, Gucci, Gucci. I never want to wear a jacket that everybody has, that’s not me, that’s not my personality. From my style, I think I’ve found my musical style also.

You’ve said when you were younger that singing was a safety net for you. What does it represent to you now?
The same. It’s very comforting and very empowering. I feel like when I’m singing, people listen to me and I fucking love that because when I was younger, they were not listening to me, and I hated that. I want to be powerful. I want to be a boss! I feel like every female should have that in their lives.

Your twin sister Anna is one of your backing vocalists. What’s it like working so closely with family?
It’s the best thing in the world. There’s a lot of people that want to become your friend because you have a little bit of fame but she’s always there. She doesn’t care if I stop tomorrow. She’s always honest, we’re the best team. She sees the same crowd I see, and also the bullshit. She sees everything, and that’s the best thing. 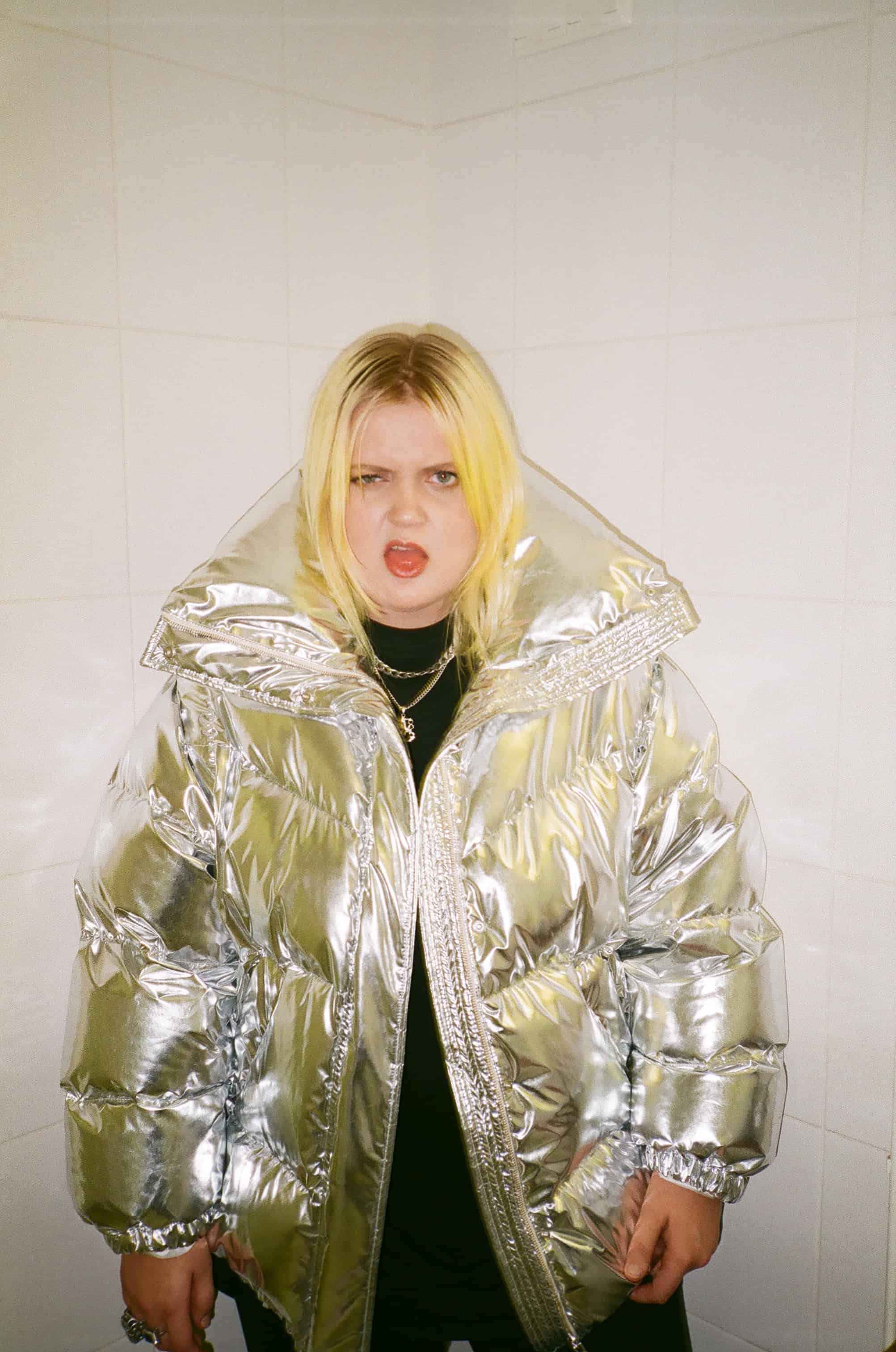 What are your favorite songs to play live?
I really like to play “Phases.” Now we’ve been rehearsing the new stuff, so I love “Cowboy.” I can’t wait to share the new songs.

You’re known to be quite the party animal. Can you tell me one of your craziest stories?
Oh my god, I have so many. There are so many parties… Every time I party with Charli [XCX] it’s crazy. We trashed my fucking expensive AirBnB apartment in LA. That was the first time we met. I just said, invite everyone, I don’t know anybody so invite everybody, and she invited everybody [laughs]. There were a lot of people. The apartment was just trashed. I needed to pay so much money. My first Coachella was this year, so that was quite a party. I saw loads of fucking famous people. I was laughing all the time cos it was so random, but it was fun.

What’s one thing about you people will be surprised to know about you?
That every time people see me, they’re surprised that I’m kinda easy and a normal human being. I don’t see myself as an artist. I always try to do normal stuff. For example, today I was shopping in a vintage store and some of my fans saw me and were like, “how the fuck can you be here?” I was like, I like to shop too! My sister would punch me in the face if I ever started acting like an artist or a superstar. I hate that. I never wanna be like that. I want to live a normal life.