Swedish pop queen LÉON is back and more powerful than ever with her new song, “Baby Don’t Talk”. It’s the first release from her forthcoming debut album that is set to come out in the new year through LÉON Recordings / BMG.

“Baby Don’t Talk” starts off slowly, building in its layers as a mix of finger snaps, a guitar, and a catchy percussion section join together to create a colorful and just downright fun song to sing-along to. “Oh baby don’t talk / Cause I like it when you don’t say nothing / Nothing at all” sings LÉON before diving into one her most cathartic and dance-worthy choruses yet.

When talking about how the concept for “Baby Don’t Talk” came about, LÉON explained: “In the studio, I was talking shit about how sometimes when you’re in a relationship for a while, you don’t want the person to talk and kill the vibe. It’s like, ‘Let’s just have a good time.”  This idea stays clear throughout the song’s lyrics that ultimately see LÉON basking comfortably in the moment with a significant other where “…there’s no need for words.”

While her music is often centred around heartache, “Baby Don’t Talk” has proven that LÉON is an artist who can’t be boxed in to one style of music – she’s ambitious, has loads of stories to tell, and writes about experiences and feelings in a way that’s both relatable and easy to listen to. This era for LÉON is bright, and we at EUPHORIA. can’t wait to hear what’s next. 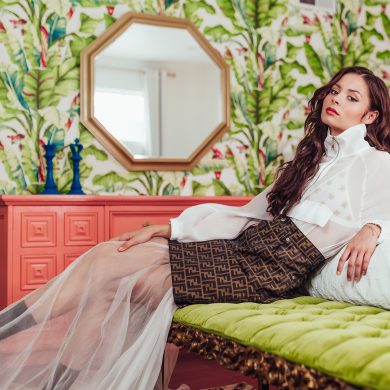