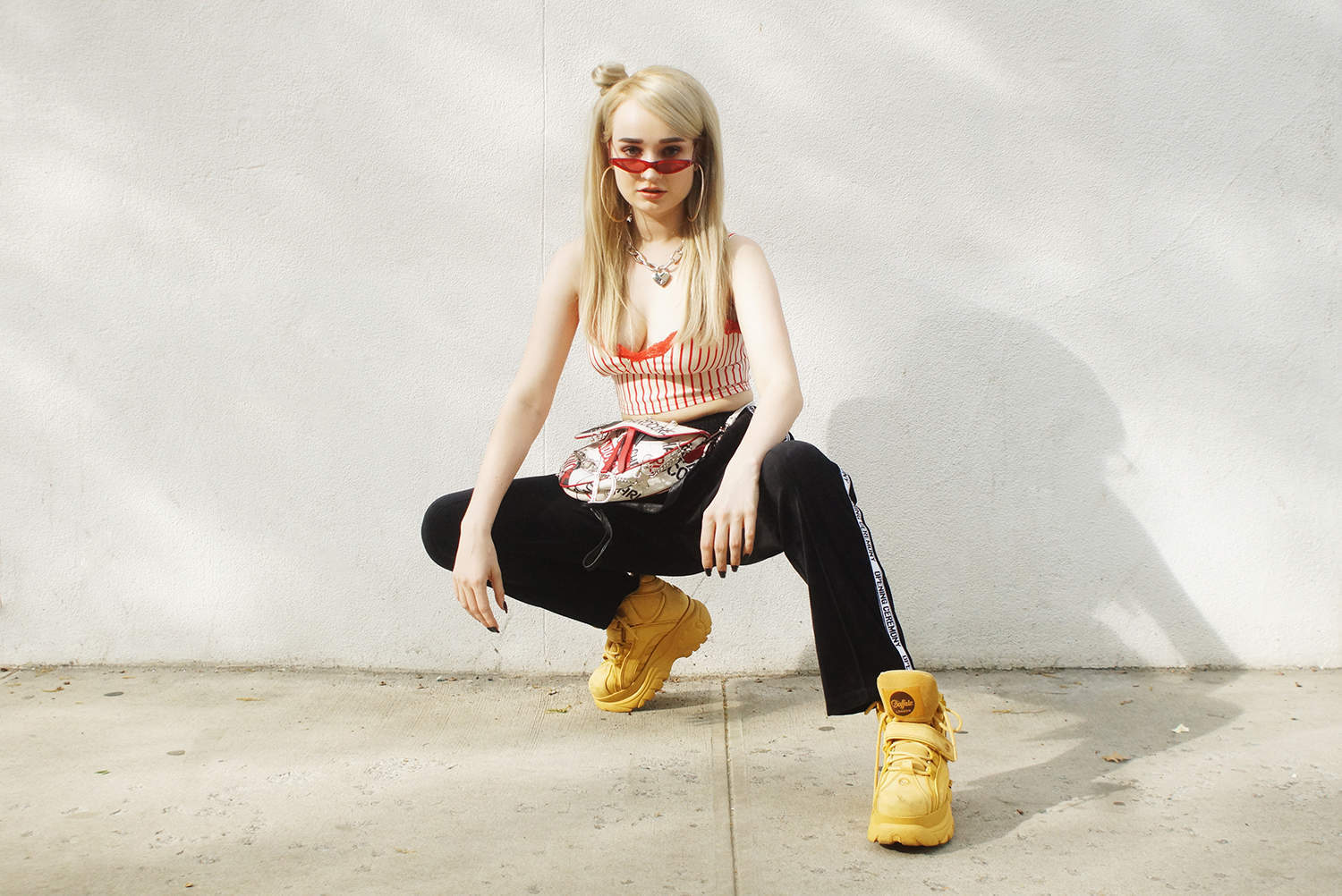 How and when did you decide to pick up from Germany and make the huge move out to LA?
At the time, I did YouTube covers that were pretty popular so I reached out to any producer or producers would reach out to me, and I would write over their tracks when I was 17. At 19, I was like “Okay, it’s now or never,” and moved to LA.

I didn’t really know anybody, so I slept on the studio couch and didn’t have any money so I just like toughed it out but I knew in Germany nobody is making pop music. Everything is like German poetry/songwriter music and I totally didn’t fit in so I knew I needed to come to LA to go to “pop school.”

Where do you find inspiration?
My friends— I’d like to think I have very very inspiring friends. Anything can really spark an idea like the name of a store or a street or anything, something simple like that can spark something. It’s mostly like lyrics so the way that I’m feeling or heartbreak and love, I love to write about that.

Who has been your mentor through your career so far?
I feel like I’ve had a lot of great people showing me the way. My lawyer, Laurie, is an amazing woman and she’s super powerful and represents these amazing artists. I feel like she’s been a big part of me making the right decisions and stuff like that. Larry has been super helpful, Luke has been amazing and teaching me so much about songwriting and supported me so much.

There are a bunch of people who have been really really influential in me having the chance to have a platform and actually getting a shot but most of all probably my best friend Aaron. You know when we kind of found each other it just clicked and like somebody understood the music I was trying to make as an artist. He was really the person to like encourage me to only be an artist and stop writing for other people because most producers would just do sessions with me and try to write for other people but I can write in any genre.

When I was in Germany I would send him over demos I would sing over on GarageBand in my mom’s basement and he took them and like transformed them into awesomeness.  I mean I’m doing everything with him and we write all the songs together. We travel everywhere, so it’s nice to experience everything with somebody.

What is pop music to you?
It’s a song that, no matter how drunk you are, you still know every single word to. I think genres are disappearing and lines are getting blurred and that’s great but I think any catchy song that is just like a part of the culture, Like Kendrick Lamar’s “Humble” is a great moment in pop. Drake’s music is a moment in pop. I think just genre-wise, anything can be pop these days.

Tell us about “Heart to Break.”
The feedback I’ve been getting is insane! I’ve gotten so many amazing drawings and artwork and people just telling me how much they love the video. It’s definitely like my favorite video yet. I feel like I’ve really gotten better at making videos and I made this concept with one of my homies and creative directors, Nick Harwood, who is amazing.

We just wrote it in like a day and then kept digging away at it until every little idea and every little detail was perfect! It was definitely the most intense videos I’ve done because it was very detail oriented and we wanted every single second of it to be awesome. I’m very proud of it. I feel like every single video I’m doing, I know more and more of who I am as an artist and the kind of world I want to create.

I remember we worked on it for four months until it was completely done. There were 10 versions of it and we kept revisiting it and changing the lyrics. We couldn’t find the right lyrics for so many versions and then once we finally had it, it was just like “Yep, this is the single.” It was just very clear with this one.

I’m excited, it’s starting to play on the radio! I just went into a bar the other day in New Orleans and it just randomly came on. It’s amazing hearing my songs on the radio.

Tell me about your first (or latest) experience with heartbreak.
My first heartbreak was probably in second grade or something. I always had crushes on boys in school and they never liked me back so I definitely had my heart broken early and it continues now. I don’t know, I’m really talented at picking the wrong guys and sticking with them and just being like “it has to be this one.”  So that’s what “Heart to Break” is about. I feel like I still need to find the right guy, but right now my husband is my career.

I don’t even want to think about it. I’m so thankful that my life is so crazy that I don’t have any time to think about any of that. I feel like I’m living my dream! Music has always gotten me over boys and heartbreak and it will continue to do that.

What advice can you give to your fans who may be going through something similar?
I would say smoke weed, eat a lot of chocolate, and it will pass eventually. Don’t let them get you down. You will find somebody who will appreciate you eventually.  Also, being single is fabulous and just finding yourself, loving yourself and working on yourself. I know that it’s hard and it sucks to be heartbroken and breakups and all that stuff sucks but just know that you will find the right person eventually!

Tell me about the inspiration “Can’t Do Better.”
It’s an awesome, amazing, amazing, amazing song and I’ve been so proud of it for so long and it’s all my friends’ favorite song so it’s a special one. It’s really big and like stadium sounding and I’m super excited for that. It’s basically a crazy, jealous girlfriend song— which I have been plenty of times. I hope people like it!

So you’ve already worked with pop icon, Charli XCX; are there any other artists you’d like to collaborate with in the future?
For sure! I’m a huge fan of Drake, Rae Sremmurd, SZA. Ariana Grande would be sick, I would also love to work with Selena Gomez. So many people!

In a time as politically charged as it is now, how critical is it for you to speak to your LGBTQ+ fans through your music/interviews/social media?
I think it’s important to stand for something, stand up for what you think is right and I think that I do. I think my fans do too and the world is changing in a really positive way. Stories are finally being heard and things are changing. It’s great to be a part of that and whenever you can make a positive impact on somebody or on anything, then do it.

What’s something you’d change about the music industry?
I guess it would be the class system– just that money rules everything. I wish more artists got the chance to shine and I wish it wasn’t such a small amount of artist that are at the peak instead of a lot who are smaller. I think things are changing in the music industry; I think streaming is making a positive impact for smaller artists, where you can earn your money by having streams and actually live off of it as a new artist. I think it’s also changing in that some people don’t need to sign with major labels and have their own labels but I think a lot of times quality music is overlooked. There are a lot of artists that keep releasing amazing music that just doesn’t get a chance because they don’t have “big money” supporting them.

What up-and-coming artists have you been into?
I’m really into my friends’ music. I love Lil Aaron. I’m a big fan of his, and I work with him all the time. He’s an amazing songwriter and artist. Probably Baby E who is pretty incredible. I love STARA’s music, I think STARA is just amazing. Those are just a few who come to mind but there are so many out there who are really great!

If you had to live off one food, what would it be?
Spaghetti

What was your last Google search?
I’m really obsessed with eBay right now so I was looking for a Prada fanny pack.

Finally, what’s next, new and exciting?
More music, hopefully, a full album. Definitely more music videos, I just sold out my first show in the UK and I’m on my way to sell out the one in Berlin too. I’m doing my headlining shows and then later this year I’m going to go on tour. I have an album ready and so so many things. I’m doing a bunch of fun, fashion things which I’m excited to share.  I’m just keeping super busy this whole year.