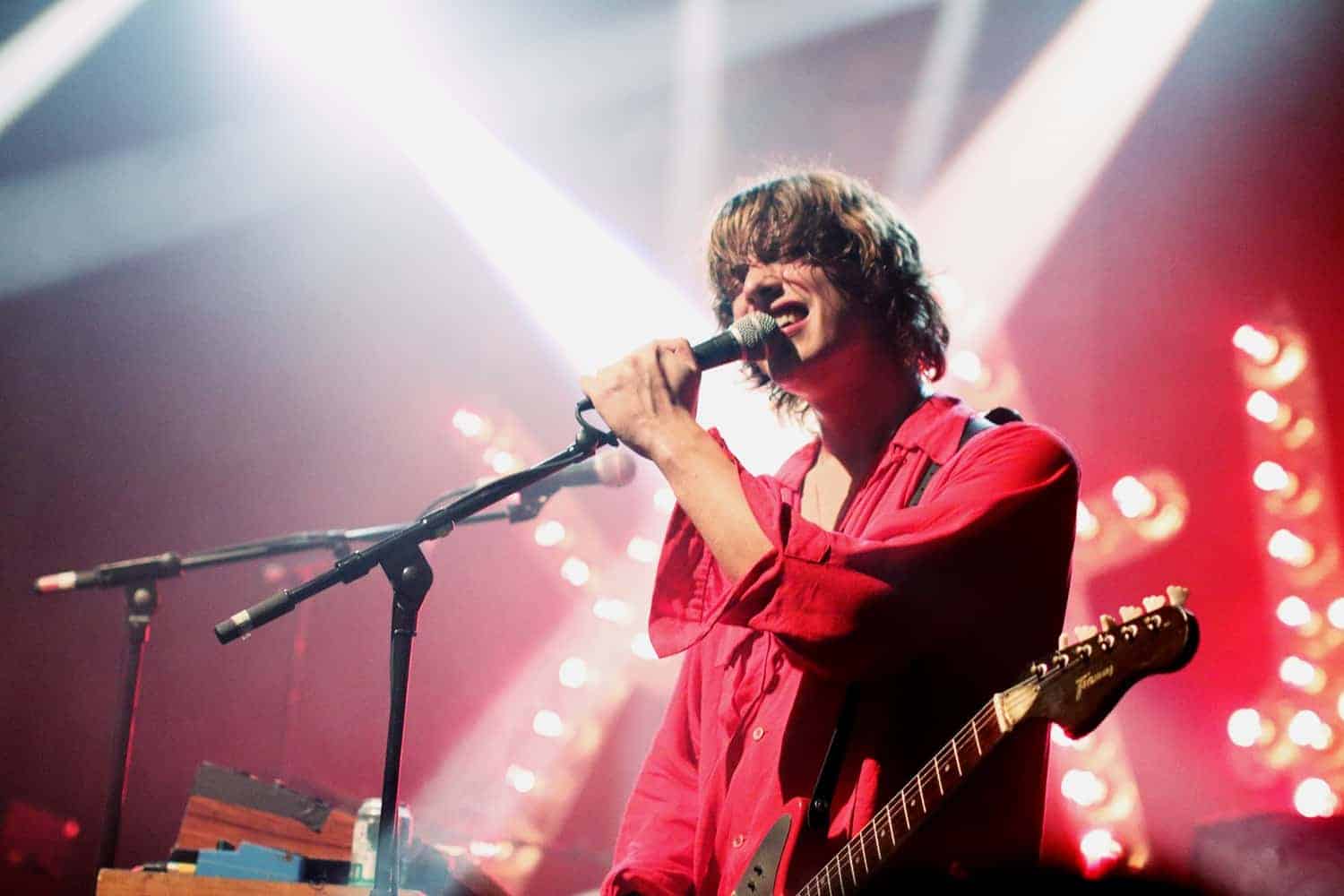 YAK Put On a Ferocious Performance in London

The masters of ferocious performances set out to tackle London’s Village Underground this Monday. Support band, Hotel Lux, immediately evokes a feeling of awareness. With a gritty approach, swaying in nostalgic recurrence, the band sounds like the perfect soundtrack for any dystopian novel. A lingering interest starts forming – a perfect precaution for what’s about to break loose.

From first second Yak is an explosion of rough guitar work over a cascade of drum-rolls. Opening with “Harbour The Feeling” of their 2016 debut Alas Salvation, Yak proves why they’re known as the most palpable punk band in the UK. “No consequence!” frontman Oliver Burslam shouts over the deliciously staccato that’s bound to the rhythm.

The notorious nature of their live set is overwhelming. Burslam’s recklessness when it comes to gear or any form of security rules is fantastic to witness. His encompassing stage presence passing him off as a head figure at the same level as Mick Jagger, and no, we’re not talking just looks here.

Delving into their most recent cut “All I Need Is Some Sunshine In My Mind” the melodic spectre shows a diversity that Yak often neglect in their euphoric jamming. The slower tempo opens up for Burslam to fully indulge in his vocals. Playing around the staggering noise, his nostalgic tint a full-fledged repertoire comes to its right.

“Smile” sneaks upon us between the pure outbursts of erratic instrumentals. The sinister darkness fills the room with a new kind of mood. It’s an eager seductiveness lingering in the slow evolvement of the song, suddenly erupting into a drum shattering climax.

On title track, “Alas Salvation” the concert is at its peak. The rude mannered, down and dirty, track thrives as its live incarnation stretches beyond the original length of a minute. As Oliver Burslam, in true punk manners, throws his body into the adoring fans, it’s the most vivid manifestation of a music sensation that many thought was long gone.

Whilst most music today is safe within the boundaries of appropriate Yak have clearly burned that rule book. Their stage show borders on reckless abandon, seemingly with no consideration for consequence, and honestly, It’s a delight.

Dipping into the exquisite depth of their soundscape, “Victorious (National Anthem)” does sum up their best, boldest features. The sludgy, gritty nature of the track and the hammering, repetitive lyrics are completely unapologetic. The vigorous guitar works wonders, drawing on 70’s punk and the grimiest corners of garage rock. There’s definitely a nod in The Stooges directions, though Yak definitely have their own modern context added to the mix.

The absolute bonkers energy and effervescent basis of the songs makes you want to jump around, start a mosh pit, break something or just stick a big ol’ finger to all authorities at once. It’s liberating, it’s sweaty, it’s almost gross, and it’s one of the most honest, remorseless live experiences I’ve had.

And yet, there is a repetitiveness that nags me. I come to miss a diversity. The relentless indulging in their own sound is fair. It’s what Yak do, but still, this is a band of immense potential, and they cut themselves short by limiting their sound to only the loudest, fastest, biggest. As the riotous set draws to an end, Burslam waste no time, effectively wrecking both stage and gear before diving into the crowd.

Yak have everything going for them. If the band can harness this fierce and profound energy just for a second, letting the guard down for a slip of variety, they will be invincible.
For now, they deserve praise for their hard-hitting punk that certainly challenge a few comfort zones. Fuck it all, a little bit of anarchy is a blast in it’s own right, and Yak execute it with grandness.