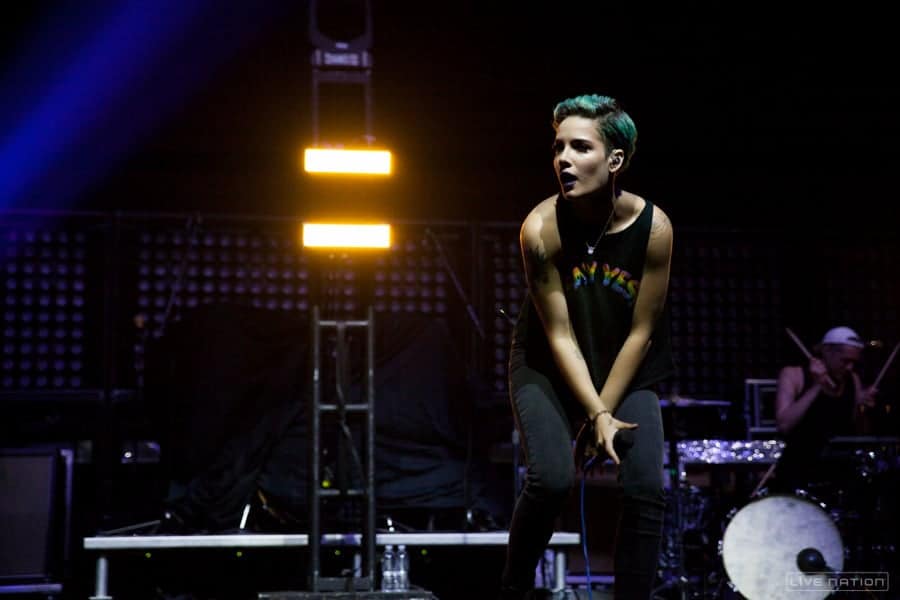 Earlier this summer, alternative-pop frontrunner, Halsey, released her sophomore album hopeless fountain kingdom. The Romeo and Juliet inspired concept album confronted massive acclaim from The Rolling Stone and New Musical Express. During the summer, Halsey even organized two pop up shops, one in Brooklyn and the other in California, to meet fans and promote her new album. When tickets for the Hopeless Fountain Kingdom Tour emerged onto the internet, fans were quick to get their tickets, making her performance at Barclays Center completely sold out.

After Halsey’s appearance on Good Morning America the previous day, and the opening performances of Charli XCX and PartyNextDoor, the hype for Halsey’s set was tremendous. Red and white strobe lights flickered against a ginormous curtain that hid Halsey and her set from the audience. “The Prologue” boomed throughout the arena against the intense screams of eager fans. A white cross then appears on the canvas, with Halsey’s silhouette enlarged, as she begins to sing “Eyes Closed.” The curtain eventual drops as it reveals the audience to the smokey staircase, the two electronic screens, and Halsey herself. The songstress rocks a black wig along with a two piece, glittering, white bodysuit and jacket to match. The red and white color-schemed lights quickly changed to purple and teal as Halsey went on to perform “Hold Me Down,” a song off her debut album, Badlands. Both color schemes were representative Halsey’s different albums.

Another Badlands favorite, “Castle,” was performed next. The lights illuminated a golden aura for this piece, similar to the golden dress she wore in the music video for “Castle.” We were also introduced to Halsey’s backup dancer, Tee. A short break was then made for the performers as images of a koi fish pond dressed the massive background screens, while Halsey’s interlude “Good Mourning” played. The stage turned as white as heaven as Halsey came back to perform “Heaven in Hiding.” To conclude this song, Halsey foreshadows a line from her song “Young God,” by stating “if you want to go to heaven you should fuck me tonight.”

Halsey then went on to dedicate “Strangers” for those in the audience who identify with, or who are allies to, the LGBT+ community. During this bop, videos of different types of couples kissing appeared on the screen with the words “Send Love.” Tee ends up coming back out for this number to dance with Halsey. We then transition into “Roman Holiday,” another song from Halsey’s debut album. A cartoon couple that seemed to be reaching the top of a mountain accompanied Halsey as she sung this with the audience.

The first costume change of the night happened for “Walls Could Talk.” The glittery white attire transformed into a fiery red leotard and knee-high kinky boots. Tee also came out in a red crop top and baggy pants. The change in set really mutated once actual fire effects danced around the stage. This fiery atmosphere is continued as the singer then goes on to perform her most recent single “Bad At Love.” Once this was over, Halsey took a moment to tell the audience about the parties she used to throw back in California, and how she wanted this next song to bring back those memories within Barclays. Balloon visuals and confetti filled the air as Halsey performed her Great Gatsby inspired song, “Alone.” She truly succeeded in bringing the party to her audience.

A mini piano solo with a blue spotlight entertained the audience as Halsey changed into her next attire. Returning to the stage, she brought back the white with a solid-colored two piece. She went on to accompany the pianist with a ballad version of her biggest hit to date, “Closer.” This song peaked at number one on the Billboard charts and turned Halsey into a big name artist. Following that, Halsey went into the slow song off her sophomore album, entitled “Sorry.” This song is a forewarning to her future lovers that she is simply bad at loving someone, as proven by her past. Tears filled the eyes of many audience members, as well as the singer herself. Halsey watched in joy as the arena sang the final chorus with her.

Fire returned as Halsey grabbed a white and orange “HFK” hoodie for her next song “Angel On Fire.” Images on butterflies filled the stage as Tee returned wearing her white costume and bedazzled mask. Halsey then runs in between the crowd to a miniature stage to perform “Lie.” The floor on this stage is flooded with water, and posses a screen to make it look like Halsey is standing in a pond of koi fish. Tee later meets up with Halsey, rocking her own white hoodie, as the two perform a choreographed fight. They then transition into “Don’t Play,” which is one of Halsey’s more edgy songs. The two danced around and kicked water into the nearby audience.

When Halsey returned back to the main stage, she sat down to talk to the audience about her previous tours and concerts, when she was still emerging into the music scene. She discussed that one of her greatest fears with this tour was that she would lose her freedom of having spontaneity in her sets at big arena venues. So, to keep this spark of individuality in every show, Halsey allows those who purchased the VIP tickets to vote on which song she should sing for the night. Out of the three choices, the New York crowd ended up choosing Halsey’s first ever single, “Ghost.” Matched with visuals of skyscrapers that resemble the city atmosphere of the music video, Halsey sang this song cheerfully as she informed us that she wrote this song on a train to Brooklyn. This was a full circle moment for her.

Green lights then emerged as Halsey dedicated “Is There Somewhere” for all of her fans that have been there and supported her throughout her career. She finished off the song by running into the crowd to take multiple selfies and give multiple hugs to her fans. If it wasn’t for them, she wouldn’t of become as big as she is. Halsey even announced that she makes an effort to remember each and every fan encounter, because they mean so much to her.

“Now or Never” is up next as Halsey comes back to the stage sporting a black “hopeless” hoodie with her blood-red kinky boots. At the end of this hit, she takes the time to thank each band member of her’s individually, including Tee. She goes on to sing another fan favorite from Badlands, “Colors.” There is not a soul in the audience who wasn’t familiar with the lyrics of this bop. Finishing off this section was “Young God.” Blue lights give a calm, yet mysterious feel to the stage. As the song builds up, the visuals take us closer to “the light.” We see Halsey as this powerful goddess who takes control of the stage she performs on. As the dim blue fades into white, smoke arises from the stage, and finally the singer disappears to prepare for her last portion of the night.

Before the show is completely ended, a video montage, assisted with the song “Hopeless,” is shown to the audience. It is a black and white mixture of Halsey with her fans at various different venues and meet and greets, along with live footage of the audience at the show. Retuning one last time, Halsey appeared back in a white top, white baggy pants, and a white silk robe. She performed “Gasoline,” as she hyped up the crowd with fire and passion. One of the lyrics, “do you call yourself a fucking hurricane like me,” Halsey decided to repeat, and make the audience repeat, as she transitioned into her final song, “Hurricane.” Halsey truly turned Barclays Center into a massive storm with her final number. A mixture of smoke, lightning visuals, blue and white lighting, and confetti brewed the storm. Halsey finished off thanking her audience before ending the show. The singer also decided to add “I’ll see you on the other side,” which many fans theorizes that it alludes to her next project.

We are excited to see what else Halsey decides to do on this magnificent tour and to see what Halsey has up her sleeve next.