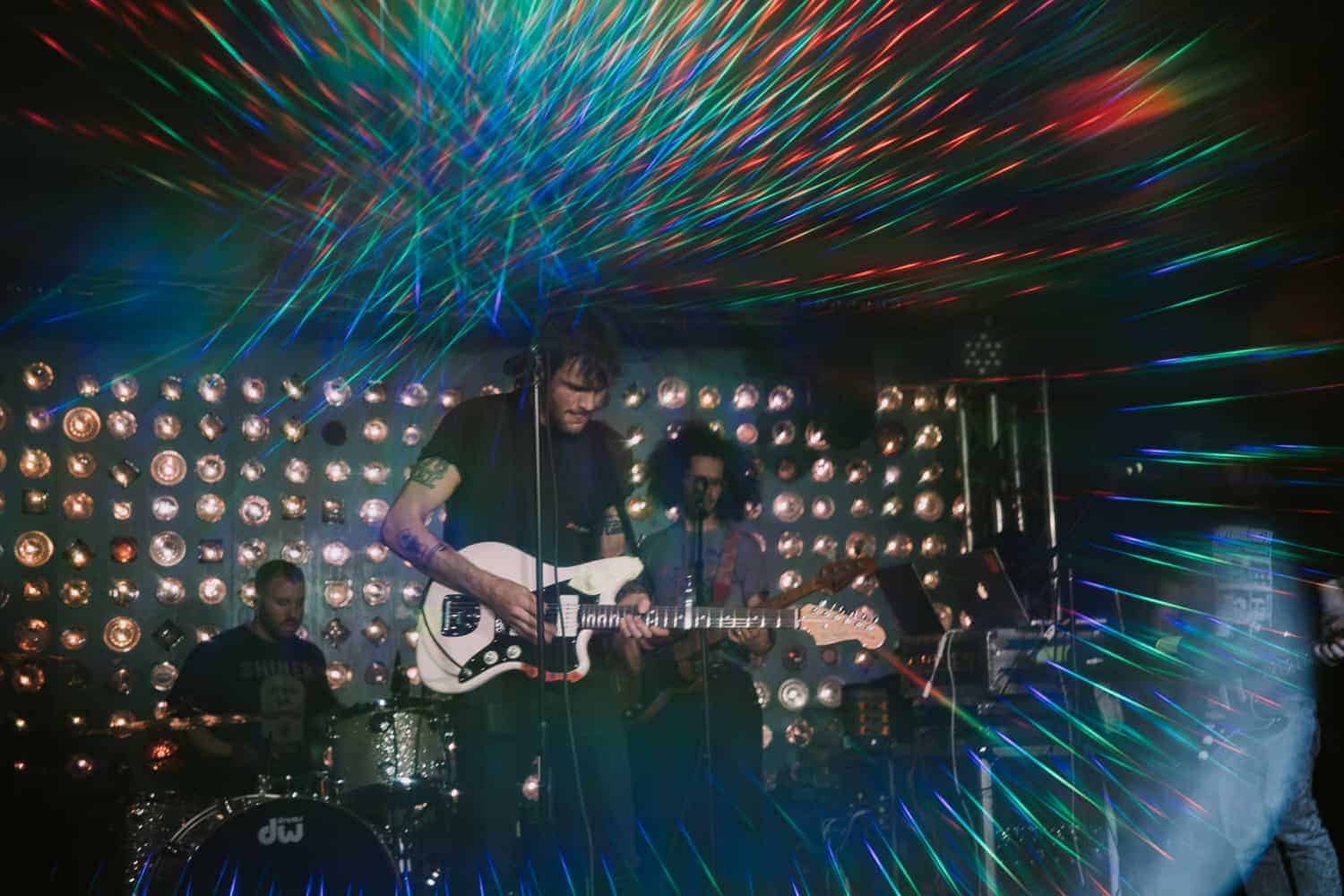 We got to catch The Night Game’s show at the Lower East Side’s Mercury Lounge on May 24th. I also got the chance to speak with frontman Martin Johnson and hang out at their soundcheck before their second NY show at Baby’s All Right in Brooklyn. Check out our conversation below.

How are you?
Martin Johnson: I’m doing great. I’m a little sleepy — New York wears me out. It’s funny it’s like I got 48 hours where I feel like I’ve been huffing Adderall and drinking sixteen Red Bulls and then all of a sudden I have like a crash, and that happened about two hours ago.

Lots of press?
M: Yeah, it’s great though to talk about how I get to hum melodies for a living. It’s the dream.

So, tell me about The Night Game.
M: What would you like to know?

Why branch off from what you were doing to start a new project, new sound?
M: I think people evolve. Sounds evolve. It was 2013 and I was working on music for other people and feeling uninspired and sick of wearing the shoes of someone else and wanted to create something great. In 2014, I basically locked myself in a room and said I’m going to do something that truly moves me, or I’m going to quit music.

Maybe life has more for me — and I think I found something that really inspired me and made me want to keep going and it was making this album. I met Francois Tetaz along the way and he was a huge inspiration to the sound and the process, introduced me to Ciaran, who’s in the band, and Dave who plays drums in the band. It just fused together and took on a life of it’s own. It’s been fun singing again, it feels good.

And it’s great to have you back.
M: Thank you.

How’d you get started in music? Before Boys Like Girls, take me back to the very beginning.
M: Watching Paul Simon VHS tapes, Graceland VHS tapes and the Simon & Garfunkel Live In Central Park concert. I started playing the ukulele when I was three, and forced my friends to play instruments when we were nine. Our first band was called Pegasus, and then it was called Wasabi.

All decent band names.
M: Ah, yeah, all incredible. All better than the one that stuck in the early 2000s (laughs). But forcing my friends to play keyboard and then the progression of events carry to the accessible route of performance and when you’re a kid it’s like chorus, musical theatre and jazz choir — so I ended up doing a ton of theatre. I’m grateful for that because I think it expanded on the melodic catalog of my brain.

Were your parents into music growing up?
M: Super.

Cause I meet some musicians, and they’re like “oh yeah, my family hated it.”
M: Nah, no, no. My mom’s passed, but her one dream was that I would be able to sing, because she couldn’t and she was super into it. And me and my dad are still best friends, it’s a really awesome time. He always goes “You know, I saw you on The Facebook live stream” and pressing buttons and liking things. My dad shared pictures of birds and Bernie Sanders on Facebook.

What’s your songwriting process?
M: It’s different for every song. Every song is it’s own best. It’s kind of like every person you’ve met is different. You know what I mean? Some people walk into a studio and say, “I’m going to write a song today!” and you know you start with “la la la” and you make a keyboard part, and a guitar part and suddenly it’s like you have an idea. You have a concept. You have something you want to say.

It evolves that way. Some happen in five seconds, and some take two years. It’s just the nature of the beast. I think when people conform themselves to one way, like when I was writing music for other people, I was super military, assembly line about it. You had to define it with math and count the syllables, and all this stuff. There’s an element of that made me able to subconsciously write stuff that’s a little bit more accessible and it was great practice. I think when you throw out the rules, that’s when the songs are the best, and the art is true.

Who or what has inspired you most?
M: My cousin Phil played in a punk band, like a street punk band when I was growing up. I really really idolized him. My first concert was at a place called the Ratskeller in Boston and I was wearing one of those starter jackets that were cool in the 90s. I was watching this like brass-knuckle style, full-on thrash punk scene and I was just like “I’m going to do that. I’m going to be in a punk rock band.” And ended up articulating it slightly different than that (laughs), but he was a huge inspiration to me because he showed me that making art for a living was possible. And that I didn’t have to follow the standard route: college and then a 9-5, be a doctor. Not that there’s anything wrong with that, it just wasn’t for me.

It’s good to find your own way.
M: Sometimes I feel like I missed out on the college experience. I was pretty decent in high school, at least I was decent at getting grades. I knew how to like cheat, and memorize just enough to get through the test and then immediately forget it afterward and compartmentalize stuff. I was good at projects, I was okay at testing and then it got me through that. I graduated early and I just wanted to do this.

For those who haven’t heard “The Outfield” yet, how would you describe it?
M: It’s so hard with music to find describing words. It’s interesting because people always want to put you in a genre box, especially in 2017 — especially in America — It’s gotta be urban or dance to get on all the hot playlists. And it’s gotta be this or that because it’s interesting.

I feel like nothing ever falls into one box anymore.
I don’t know, I tried to make something that was true to me and it’s made with real instruments and microphones and not that there’s anything wrong with it, I’m a huge fan of modern music — DJs and big hooks — but I’d say it’s a little different than that. Hope it’s fresh to people’s ears.

John Mayer posted his support for you guys — How’d that happen?!
M: He heard the song on Spotify.

That’s crazy.
M: I mean, God bless Spotify. It’s funny because a lot of musicians are really kind of pissed off at music and how it’s changed, how everything’s accessible and streaming. I think it’s great. It’s a click away. When I first started releasing my own music, it was the Myspace era, and it was free then too. It’s cool to sell records, but it’s also cool to have as many people possible hear your song and if that means burning a CD or sending a friend and mp3 via instant messager or cell phone or whatever it’s gonna be. Now it’s streaming and it’s great.

So, he heard the song on Spotify and then asked us to do the tour, we’re going to do the whole west coast tour. I couldn’t be more happier and ecstatic and it’s an amazing way to kickstart the project. I’m super grateful for John to take an unconventional route. It’s the coolest, classiest thing. It’s the least industry thing I’ve ever really seen. We’re doing this without a label, and he heard the song and said I want to listen to this band. I want to have them come on the tour. It’s really refreshing because it usually originates from the label or manager when it’s that big.

Or the labels want to pair it, like two Columbia artists.
M: Yeah, and I was dropped from Columbia, and he’s on Columbia (laughs). It’s kind of interesting (ass slap, winky face).

Have you seen his live show?
M: Yeah, he’s extraordinary. He’s unbelievable. He’s a real talent and there’s a reason why he’s as successful as he is.

Are there any artist you want to work with on this project?
M: I haven’t really thought about that. I think collaborations are interesting. There’s a collaboration that I can’t talk about yet that’s coming out in the next couple months that’s really interesting in the DJ world. It’s kind of an exciting thing. It will give it a bit of a jump. It’s interesting to see where the road leads you and who’s exciting about what you’re doing. I don’t have a specific name I have that I want to drop on you, but I’m excited.

They can be dead, though!
M: They can? Hmm… Maybe just Simon & Garfunkel. Yeah. I have this thing, though, where it’s really tough to meet your idols. I ended up sorta meeting someone in the music industry and they’re shorter than you, and they talk funny or don’t sound like they do with a microphone on. It’s interesting because it deflates what you’ve made of them in your head and brings you back to reality. It’s almost like you grow up and you started working with people and it’s like you’ve had to transfer your worshipping energy to sports. Put the helmet on and the eye black, and it gives you something new to believe in.

What was your last Google search? Do you remember?
M: I’ll tell you (starts searching). Probably some dirty dog websites (still searching).

We can skip it if you want?
M: Nah, it’s okay I don’t mind. You can scan through the tithes on my camera roll, if you want.

(laughs) I’m good.
M: (still searching) Elephant baby!
Manager: What are you talking about?!
Martin: There was a beautiful girl outside of the Mercury Lounge show and she asked me to draw an elephant baby with Sharpie and she’s going to get it tattooed on her wrist. I think she did a tag on Instagram, so we’ll see if she actually does it. But I had to draw an elephant.
(Manager) I mean, you also want to get it right. She’s going to have that thing on her for the rest of her life.
Martin: I mean, laser’s come a long way, but still! Her name was Elle, sweet girl. I had to make sure that I didn’t draw a dog. When’s the last time you drew an elephant?

What’s your go-to drink?
M: Water and Diet Coke. I don’t drink. I used to, but. I was so good at drinking that my numbers hang in the Hall of Fame.

If you had to live off one food, what would it be?
M: One food?! What’s the one you can actually survive off? Potatoes, right? I want to give you a logistical answer. Some sort of soy protein or something. Maybe soy? You can turn that into anything. You can turn it into anything.

How do you turn it into anything without adding an extra ingredient?
M: So, now you’re just complicating it!

I’m asking you to become a chemist.
M: But then you’re gonna get sick of it. So probably something bland like potatoes or rice. Something that wouldn’t totally kill you.

Check out photos from The Night Game’s sold out show at NYC’s Mercury Lounge below.