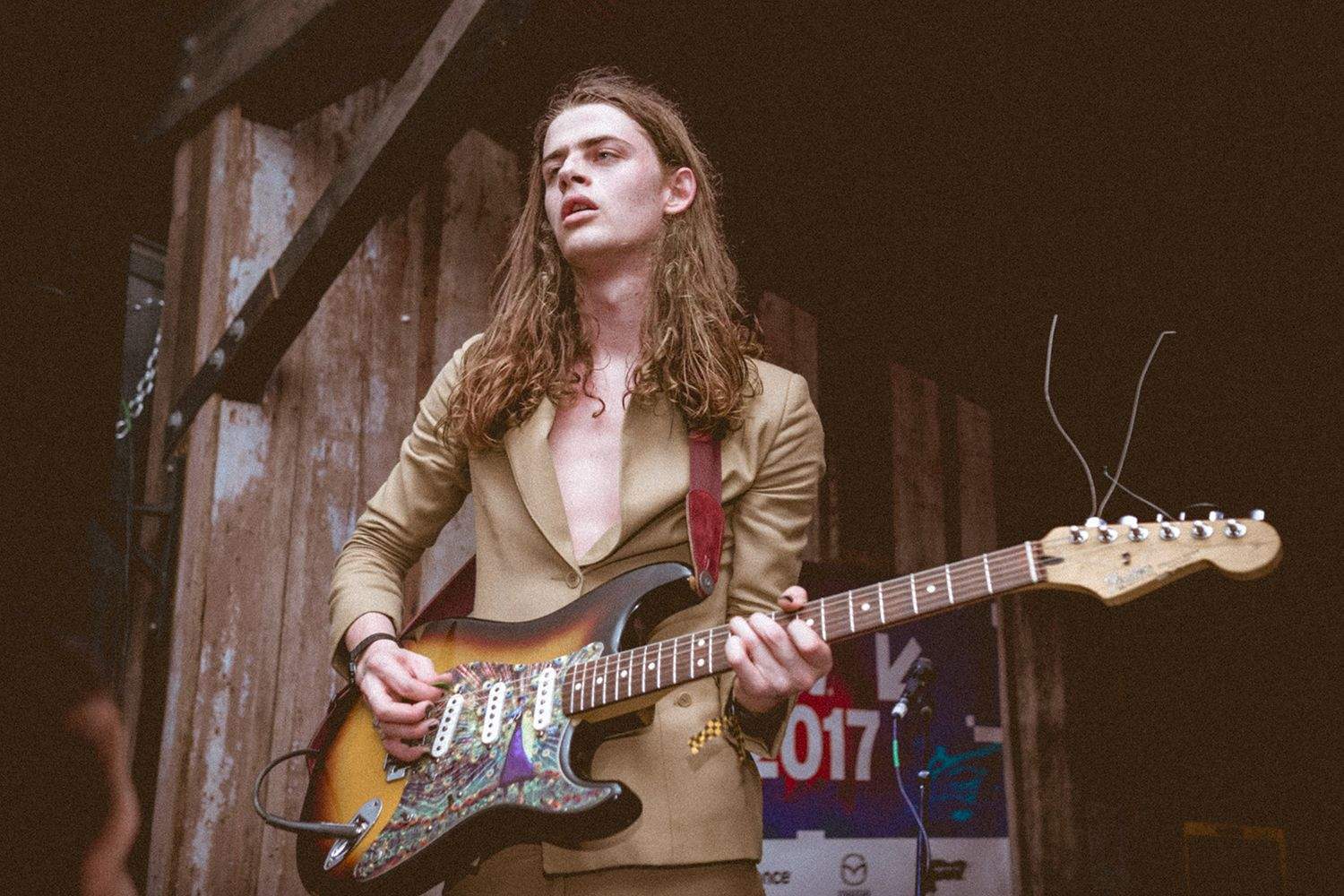 Based on appearances alone, you would be surprised to discover that Blaenavon are the minds behind a new wave of self-proclaimed “progressive alternative rock.” The three boys are fresh into their twenties, dressed in bell-bottoms pants, oversized sweaters, and button downs, with unruly hair and haphazardly painted finger nails. You would not suspect their live performance to be filled with raging hair flips. And you would not suspect that a band of such young musicians would be so tuned in to writing music that will stand up to history, but Blaenavon are full of surprises.

We caught up with singer/guitarist Ben Gregory, bassist Frank Wright, and drummer Harris McMillan on a blissfully sunny day in Austin, Texas, on the last Saturday of SXSW 2017.

The band barely made it to Austin by Thursday, but still caught the best of the music festival in one day at four separate shows – a show at the renowned House of Vans at Mohawk, a college party gig, a set at a 70s-styled bar that ended with Gregory taking a fully-clothed dip in the pool, and a midnight slot on Rainy Street at the Transgressive Records showcase.

“Recently, we’ve been dealt a tough deck of cards from the hand of fate,” Gregory says of getting into SXSW later than expected. “We felt like we could overcome it and power our way through so every show was like ‘Yeah, fuck we’re gonna do it!’ I think it’s the greatest day we’ve done as a band.”

Still buzzing off of the high of their four shows and the surprises that lay around every corner of SXSW, Blaenavon have more to look forward to with the release of their debut album That’s Your Lot, due out April 7. While the three have been playing together since their early teen years in the small town of Liphook, England, their debut is representative of their work as a “proper band.”

“It’s kind of the greatest hits from the last five years,” he says. “It’s a long narrative over a lot years but it’s all kind of pieced together in a way that still makes sense.”

“I Will Be The World” is a showcase of their diligent work and musicianship. The song is effortlessly fluid. Gregory’s vocals slur from one line to the next without hesitation and end with an emphasis that sounds as if he’s asking a question – luring the listener in with a dizzying suspense for an answer. The song builds to a roar of pulsating percussion challenging the tempo, while guitar and bass leave it dripping in distortion. The chaos ends with an exclamation from Gregory’s vocal inflection, but leaves the lingering feeling of something unsaid.

It’s a massively impressive song. Gregory says, “I never really said it before, but it’s kind of like Nirvana… That song is kind of hand-crafted by the god of rock to make people go mad.”

“Are you claiming to be the God of rock?” McMillan asks Gregory.

“No, no, no,” Gregory counters. “Another power delivered that song to us. We are merely the prophets.”

“I Will Be The World” is just the beginning of what Blaenavon have to share. Gregory says each song on the record is different, which Wright adds is why they took their time making the record.

“I think… boldly, we like to think that we are generation-defining for rock,” Wright says.

Such a striking claim from any indie-rock band can come off as cocky, but Blaenavon are sincere when they speak about music, showing their thoughtful deliberation in writing the album. They are keenly aware of the trials of the music industry, and the tendency of fans to flock towards an indie-rock song with a catchy melody that can be a five-minute-hit.

“There’s a lot of really boring, derivative indie music in the U.K. right now,” Gregory says. “We’re just trying to make sure we’re not in that so lots of people remember us. You see us live and it’s quite clear that we’re not that.”

This is Blaenavon’s second year at SXSW, and their only American shows aside from a few nights in New York City. As many young English bands, they have yet to gain a wide following in America, while in England, they can pack several hundred avid fans into small clubs across the country.

“Blaenavon fans seem to have a certain thing about them that everyone shares,” McMillan says. “And you can see that they love being with each other and finding out that there’s more like them.”

“They’re the fucking weirdos,” Gregory adds. “They can see that we’re the fucking weird guys that sat in a room one day and made music together and chatted about the most fucked up stuff and they do that too, and they kind of connect with us somehow. They’re utterly mad, all of them. I love them so much.”