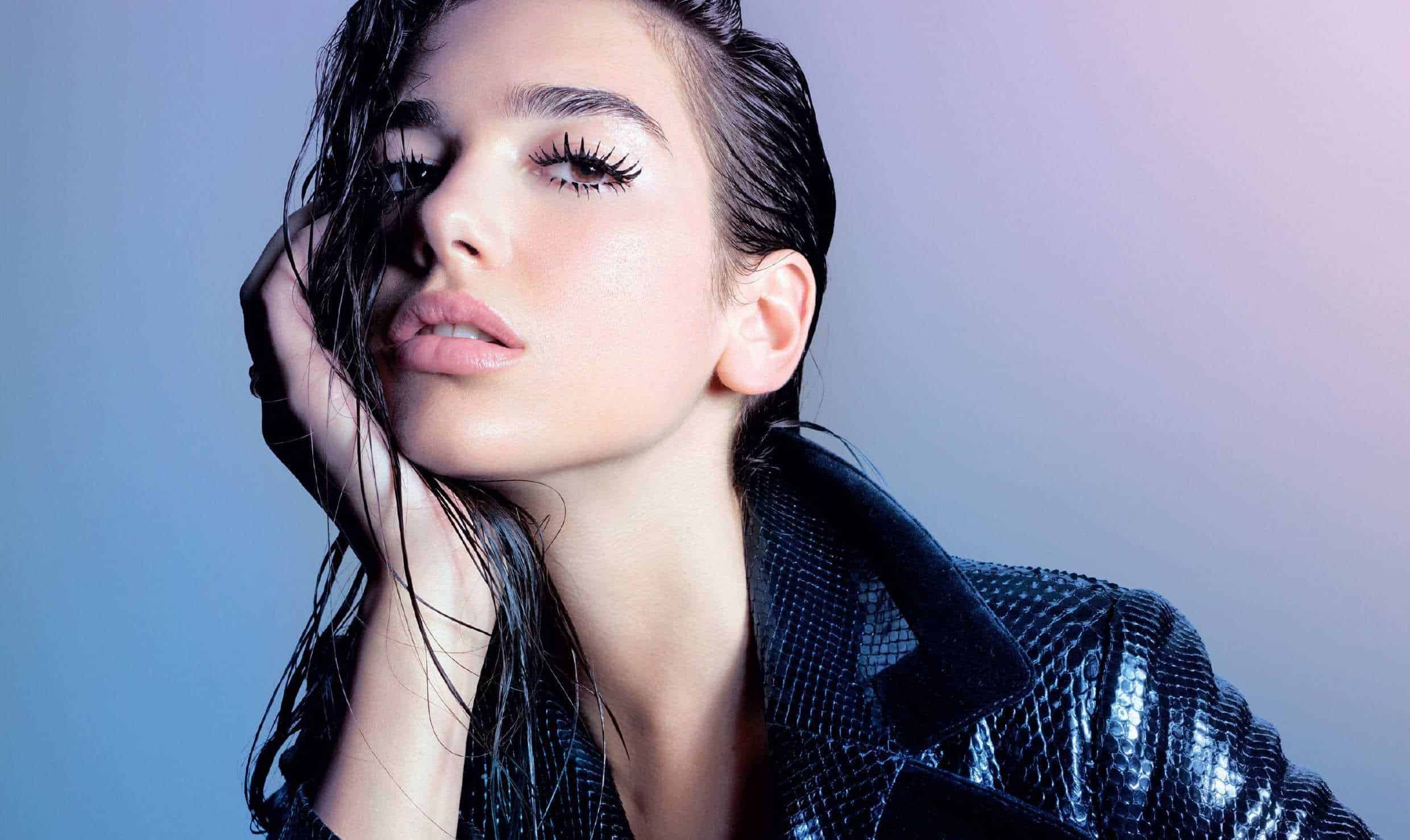 We got a chance to talk to Dua Lipa ahead of the crazy busy year she’s scheduled to have with the launch of her self-titled debut album due out June 2nd. Check out our conversation below.

Congratulations it looks like 2017 is slated to be your year.
Dua Lipa: I hope so!

What got you started in music? I saw you did YouTube covers and your dad was definitely an inspiration, but what made you want to pursue it yourself?
DL: I was born and raised in London, and at the age of 11, I moved to Kosovo. I knew when I moved there that I really discovered that I was always singing around the house, but it was really then that I discovered that I loved performing in front of people, that I loved just music and there was something always dragging me back to London.

So at the age of 15, I persuaded my parents to let me live in London on my own to go to school and really focus on music and get it out there. I started just posting covers up online and I didn’t really know if anything was going to come of it, but for me it was to show people that I was putting music out, so the girls in school would know that I sing. It was just so everyone would know that was what I wanted to do.

Then, through social media, people started finding Chance the Rapper covers on Soundcloud and producers were messaging me saying we should work together. It was kind of like one thing met to another. I met my manager, and he was the one that started putting me into sessions and I wrote, the song that kind of started everything for me, “Hotter Than Hell.”

One of my favorites!
DL: Aw thank you so much, I’m glad you like it. It’s a really special song for me. It was just one of those songs that caught label’s attention.

Has your culture contributed to your music?
DL: I was born and raised in London, so I’m really a London girl and I think it has a lot of influence on my style and even just things I wear. It comes through, but I’ve always grown up loving pop music and always wanted to be a pop artist. I think now it’s become kind of okay to be a pop artist because bigger pop artists have had so much creativity where it’s become to reinvent them and change it into something cooler, I think its more the artists that represent the music they make, rather than genres.

Some pop artists get a lot of shit just for being pop artists.
DL: Yeah, totally and they shouldn’t. Look at someone like Rihanna, she’s a pop artist and her songs are quite pop and with this new album, ANTI, she was able to reinvent herself and it’s still classed as pop music. It’s her, but then its just popular music.

You’ve dabbled with various sounds so far, such as tropical house on “Hotter Than Hell,” and sort of bubblegum electropop on “Blow Your Mind.” Are there any songs on your upcoming album that would fall under an unusual subgenre, or that your fans would find to be an unexpected sound coming from you?
DL: Yeah, there are a few songs on there that I’m really excited for people to hear. But there was a song that I released a little while ago just for them to have and get a taste of what’s to come, is a song called “Room For 2.” It’s kind of like a scary kid’s nursery rhyme, in a way? I think people found that really interesting and there’s more where that came from.

Does your album follow any recurring theme or concept?
DL: It’s all autobiographical, all things that have been kind of happening in my life, things I feel really personal and passionate about. I think I’ve learned a lot to be able to open up and talk about myself, especially in a room in front of strangers when I go in to write. I want when my fans and listeners hear my songs to know that somethings that they’re afraid to talk about, that they are able to open up about it. Especially after some girls would message me and say “Hotter than Hell made me feel so empowered,” I think after all of that I want my fans to take my songs and feel like they are able to be really free and open up about who they are.

The day after I told one of my co-workers about you, your photos with V Magazine and Mario Testino came out, which look AMAZING.
DL: Thank you so much! That was fucking crazy. It was such an honor to get to work with Mario and shoot for V. It was just so much fun. It was a crazy shoot, it was a whole transformation. The inspiration for the shoot was like a young Cher, so they were like “We need to get rid of your eyebrows.” And I was like “Um…” Then they said they were gonna bleach them and, with glue, make them thin, and I just love the idea of playing dress-up and playing a character so I was like “Fuck yes, let’s just do it.” At the end of the shoot, they dyed my eyebrows back, but I still feel like my eyebrows are a bit multi-colored. They’re so thick that some have come back to normal and some are blonde.

To what extent, if any, does your personal style and look reflect your music?
DL: I feel like everything that’s visual goes hand-in-hand with music, especially for the videos and stuff. I always love being a bit weirder and different. I got major inspiration from the ‘90s and that’s something that I love a lot.

I bet some people that read this would be like “but you were only alive for 5 years of the 90s.”
DL: I know, I hate that! I’m just like “fuckers!” I look back and see photos of my mom when she was young and had me, and telling her “damn, why didn’t you keep that dress? I would’ve wanted it.” It’s just like that old 90s, Drew Barrymore style, Kate Moss with the slip dresses and the big chunky boots but mixing it with what’s really current. I feel like everything is kind of coming back.

Definitely! Was there one defining artist or song in your life that inspired you to pursue music as a career?
DL: “Get The Party Started” by Pink. I’ve always been obsessed with her and Nelly Furtado, but it’s always been that one song that I just fucking love it. No matter what, if it plays somewhere, I’ll just lose my shit and sing along to it. The whole album is just amazing. It was so defining for Pink, as an artist.

Let’s talk about your collaboration with Sean Paul “No Lie” – The song is really great. I was obsessed with Sean Paul as a kid.
DL: STOP! No, oh my god. You know when I was shooting the video with him, in my head, all I was thinking was “Baby Boy” with Beyoncé. Legit, in my head, I remember listening to that song and now having a song with Sean Paul blows my fucking mind.

How’d that come about? And how do you feel being among the likes of Beyoncé, Blu Cantrell, Keyshia Cole?
DL: It’s crazy. It was one of those things. The song was written by Sean and two of my friends, Andrew and Emily. Emily played me the track and I got so obsessed with it and all of a sudden, it was like “Oh, Sean is looking for a cool new artist, do you want to track it?” And I was like, “uh, duh!” And that was it. We’d never even met until after the song came out for like two or three days and he’s just the coolest guy ever. And It’s the weirdest thing ever, but we’re actually friends. He’s an actual angel.

While on the topic of inspirations, many have noted the similarity between some lyrics in “Hotter Than Hell” and the Arctic Monkeys song “505.” Was this just a coincidence or are you a fan of the band?
DL: I’m a fan of the band and in the whole song I’ve channeled someone who made me feel like I wasn’t good enough. Throughout the whole song, I’ve taken it and made it seem like I have and in his lyrics, it was about him saying “I’d still adore you with my hands around your neck.” And so I wanted to change it and put it in my perspective of that person was more obsessed with me, so totally intentional.

What is it like being a new artist emerging in the current rising internet and streaming culture?
DL: It’s really fun. The fanbase is cool as hell. Its really nice to be able to vibe with everyone. It’s different but I’ve grown with social media that everything feels so natural. Times are changing so much that it’s harder for artists to be heard and seen so social media gives them that extra platform.

I’ve never been to London, but finally booked my flight in March, so I’m super excited. I love asking this question because I get the most interesting answers. If I were in London with you for a day, where would you take me?
DL: Do you like ramen?

I do!
DL: There’s the most amazing ramen bar called Bone Daddies and I’d take you to take a kimchi ramen there. Then we’d go to drinks in SoHo. There’s like a really funny and cool arcade where kids dress up like anime characters and they play DanceMat, but it’s also a really fun place to play air hockey.

If you had the ultimately celebrity power, what would be on your rider?
DL: I would want a micro pig to play with, lots of Diptyque candles, bottles of water with my name on it, and I don’t know. I think that’s it? Fresh flowers would be nice. A karaoke machine is quite good too. I could fuck with a DanceMat backstage too, that would be cool.

If you had to live off one food, what would it be?
Fish and chips. That’s also where you have to go: this place called the Seashell of Lisson Grove and have fish and chips because it’s the best.

Dua’s album is set to release on June 2nd. Be sure to pre-order on iTunes here.