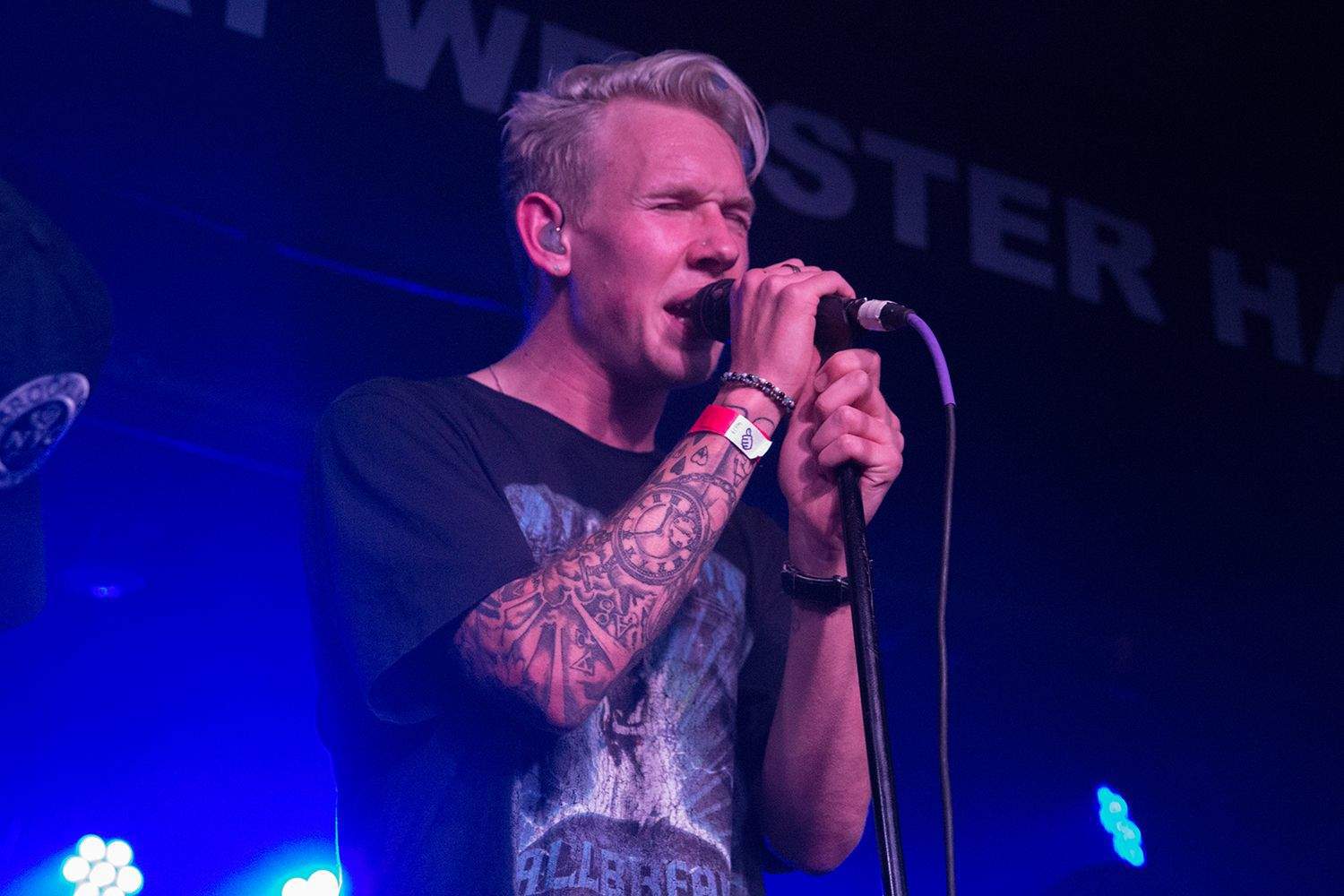 HUNTAR – The Studio at Webster Hall

First and foremost, welcome to NY! Have you all had a chance to do anything fun in the city yet?
I’m staying in ChinaTown, so I had one day yesterday to stay awake and I went all around that side of New York and it was amazing. It’s good.

What was the writing process and inspiration behind your last couple tracks?
The inspiration is always just real life, and things that are happening. Everything is based on what’s happening in my life. The writing process is that there is no process. There is no process in writing songs. If you try to regiment it, then you’ll have the same song over and over again. You do that, it’s not fun anymore.
I’ve seen that with some artists, some of their songs seem more mathematical than anything.
If I’m like this beat’s really cool, let’s write to it. If I have something in my head, I’ll put it down in a voice memo, then get home and produce it.

Where’d you get the name HUNTAR from?
I was in a meeting with my label and he had a poster of “Deer Hunter” and I thought that movie was great because Christopher Walken shoots himself in the head.
Oh, that’s good. (laughs)
Hunter would be a great name for what I’m doing. So I googled it, and the first thing that came up was people hunting. And I thought, I can’t have that. So I changed the E to an A and I was the first person to come up straight away. It looks kinda cool and anyone who knows me, knows I’m a big fan of Prince and I like the whole one name, very simple, very clean.

How’d you get started in music?
I started off doing acoustic stuff because that was all I could afford. I only had an acoustic guitar, so I just did it.
You got pretty far, though!
Yeah (laughs.) It did alright. I ended up selling out shows around the UK and Europe and then signed a publishing deal with Good Soldier and they turn around and asked, “What do you wanna do?” I asked, “what do you mean?” And they just told me “You can do anything now.” I said, I love Prince, Justin Timberlake and R&B music and they told me it was a choice. They got me a MacBook and the software and 2 months later I came back with HUNTAR completely anonymously. No face, no nothing because I wanted it to be a case of— if the music’s really good, the people will like it. Then Zane Lowe and Radio 1 picked up on it. And now we’re here, doing a headline show in a different continent. So maybe, it all worked out for the best.

You’ve been doing a lot of shows lately, what was the first show you went to?
It was Justin Timberlake! The Justified tour, I was 11. It was unreal! He went out and cherry picked one of the audience. His song “Let’s Take A Ride” just got me.

What new artists have you been super into lately?
Gallant. I love him, he’s great. He’s like the American side of me (laughs). I love Shaun Colwill, who we got supporting us on tour next year hopefully. He supported us at the Camden Assembly show, he’s really incredible, very soulful guy. I really love Bryson Tiller, he’s still new to us in the UK.

What’s one thing you’d want to change about the industry? Perfect timing with the Daniel Glass [owner of Glassnote Records] just walking in.

Uhh, nothing! The thing I would change is, if I were in the industry as a label I would realize that the artist knows what’s going well and what isn’t. They’re the person that plays the shows every night, and sees the fans and interacts with them everyday and every night. I think sometimes, although they’re there to help you and build you up, I think when you get to a certain point and you know what’s working and isn’t working is up to the artist to take it by the horns. If the diamond thing in the logo is working, then we have to do that. If everyone hears “Echo” and loves it, then that could be the next release.

That’s the thing with the guys I work with [Glassnote], there’s a nice family bond. I said to them when we did the last headline show back home, we needed to put in “Echo” because the crowd loved it. They told me “you just did two back-to-back tours, you know what the fans like.

If you had the celebrity power of Kanye West, what would be on your rider? I know I’ve asked you this before, but a couple years later, I wanted to see if your response would change.
Now, that I’ve got more celebrity power?
Duh.
I’m still the same, I remember this one as well. I’d just ask for a couple of beers, get some bread, maybe a bottle of rum and that’s it.

If you had to live off one food, what would it be? And don’t say bread.
Chicken. Definitely, 100%, chicken. I think I eat chicken more than anything else. It’s great, so many ways you can do it.

I’ve never been to London… Where would you take me?
To a HUNTAR show. They’re really good apparently (laughs). I would take you to Shoreditch and I would show you all around — the one thing I love about London that’s very different to anywhere else is that London’s almost like — you see how Harry Potter is, with loads of back alleys and loads of character. It’s not all regimented. You can go in Shoreditch and find an alleyway that isn’t on the map. That’s what I like doing. So that’s where I’d take you.
An alleyway in Shoreditch.
Yep.

Who is the most influential person in your life?
My mum. I grew just with just my mum, so watching her do everything she can to make sure everything works — It was really inspiring. She also taught me that if you have a really clean room, you can’t really lose anything.

What’s next for HUNTAR?
Gonna play a show in about 20 minutes at Webster Hall, which is a great moment because I’m playing a show that isn’t anywhere on my continent. That’s gonna be fun. Then we got loads of promo stuff this week, then the Fickle Friends tour, then my next headline London show is February 15th at Hoxton Square Bar & Kitchen, which is almost sold out, which is mental. Then I want to come back here and sell out the big boy Webster Hall.