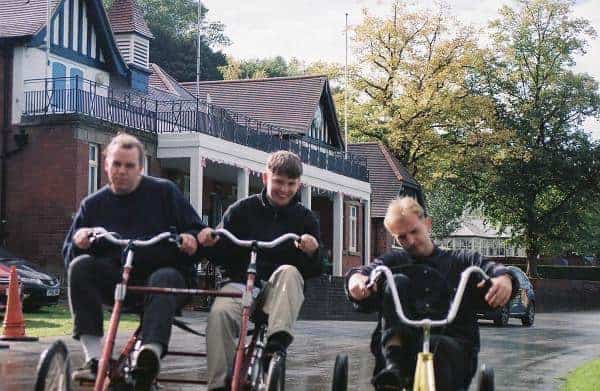 Trudy and the Romance – My Baby’s Gone Away

“My Baby’s Gone Away” is the latest tune by Trudy and the Romance. The three swashbuckling Liverpudlians created a new and exciting genre called “50’s Mutant Pop.” It’s an amalgamation of garage rock, lo-fi, and Motown-influenced early rock and roll. There’s something mad, unkempt, and unruly about this combination—“infectious” is putting it mildly.

This latest treasure features everything one has (or, at least, very quickly will) come to love about Trudy and the Romance. Boisterous drums, a spaghetti-western showdown of bass and guitar, and a healthy dose of barroom chanting. Frontman Oliver Taylor croons like the drunken captain of a marooned cruise ship. Wild-eyed, heartfelt, and impassioned, “My Baby’s Gone Away” is the aching anthem of heartbreak this season.

Once you’re in this song’s spell-binding gaze, there’s no turning back. The same can surely be said of Trudy and the Romance as a whole. These guys are steadily garnering wide acclaim with an ever-increasing following—and just as they should. They are without a doubt one of the most exciting bands around right now. Everyone with an inclination towards rock music, towards new music, or towards good music should keep an eye Trudy and the Romance.

As of right now, their tour mainly consists of UK/European shows, with SXSW in Austin, Texas being the only exception. Here’s hoping they do a larger and longer tour in the near future.