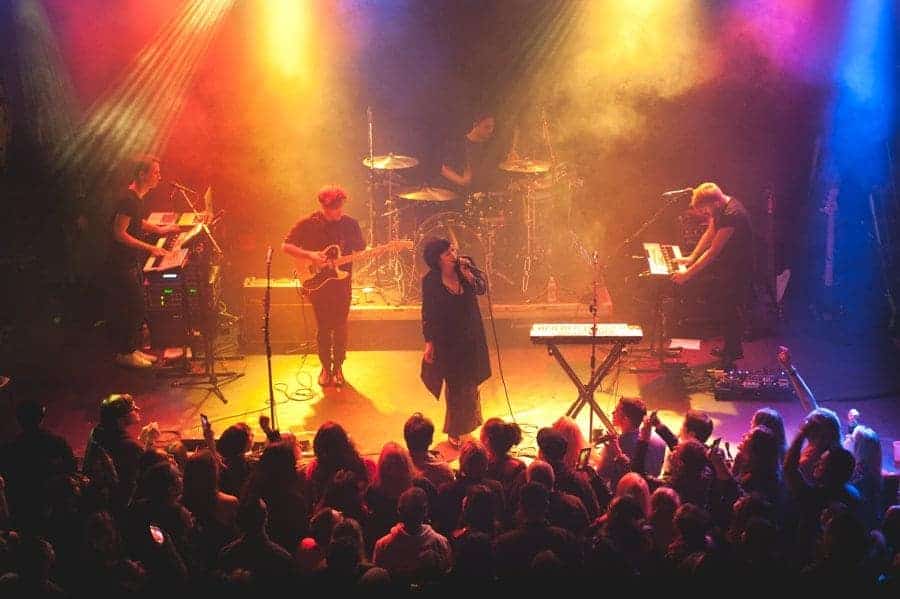 The Naked and Famous – Simple Forms

It’s hard to believe it’s been three years since we last heard from The Naked and Famous, in the form of their sophomore album In Rolling Waves. For that matter, it’s hard to believe their flagship single “Punching in a Dream” came to life almost six years ago.

It’s all a part of the ongoing story of the New Zealand indie-pop group. Now, they are introducing Simple Forms, the musical result of a tumultuous period in both their band and personal lives.

The lead single, released back in July, is indicative of where the band were emotionally at the time of recording. “Higher” is dripping with the familiar synth-driven melodies and singer Alisa Xayalith’s absolutely soaring vocals, but there is something distinct about the song.

Lyrically, “Higher” is very emotionally driven and honest – nearly every line, from “time is the medicine / to heal these needs” to “better believe the sea of changes / and put these battered bones to rest” – is a statement of healing and moving on. With what we know now, this song serves as a bit of a mission statement for the album as a whole as an opening track.

Following the touring cycle of In Rolling Waves, the band’s personal lives seemed to be falling apart, putting the group at risk. In particular, Xayalith and producer/vocalist/guitarist Thom Powers, the founding members, were having relationship trouble at the cost of their profession. But, if there is anything about musicians, it’s that you can’t stop a creative force. As the members took their time away from one another, Powers continued to work on demos and eventually, The Naked and Famous were able to reconvene.

This story is important in the fact that Simple Forms lays it all out on the table.

“The Water Beneath You” is a hopeful song about family, and support, with an intense and almost erratic backdrop that creates a sense of duality and complexity. The different sides to these themes are explored as the album progresses, with “Last Forever” having an overall feeling of bittersweet loss, and everything that comes with that side of the human experience.

The midway point is a refreshing change of pace in “Losing Our Control.” It’s the TNAF version of a ballad, giving a little more emphasis to the vocals and dialing back the sometimes excessive production.

Although it’s more of a quiet moment, “Losing Our Control” still has all of the elements that make The Naked and Famous distinctive, a testament to their cohesion as a group. And in fact, only a select few individuals outside of the band had any say on the technical creation of the album.

A haunting moment comes beyond this mark in “Backslide.” The foundation of the song is a line that sings, “Who’s to say that you won’t find love again?” This is probably the closest thing to an overarching theme in Simple Forms. It covers both the positivity and negativity of a situation, and leaves things open-ended enough for new meanings to grow.

The softer, more refined theme first heard in “Losing Our Control” surfaces again as the album progresses – in the guitar-driven “The Runners,” the closest thing to a traditional indie-rock song you will find, and in concluding tracks “Falling” and “Rotten.” Hearing this side of the Naked and Famous marks a more mature sound and a real growth in their art. It’s almost exactly as Powers put it: “it felt – tentatively – like we had a new path to follow.”

Simple Forms is not only a resurgence of a band that seemingly disappeared off the map. It’s a change for The Naked and Famous to share their journey, and the start of a new era.